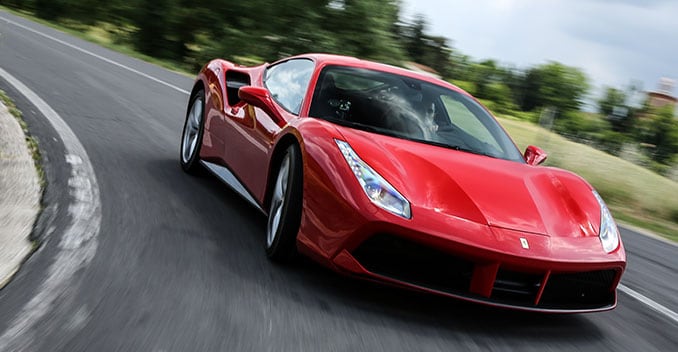 It is not often one gets the chance to live his dream. And when it happens more than once it is extra special. That is still how I feel every time I go back to Maranello to test a new car coming out of Scuderia Ferrari. Goosebumps all over - every time! It's been exactly 40 years since Ferrari made its first mid-rear-engine V8 Berlinetta - the 308 GTB. And now you have got the 488 GTB coming into the market and it carries quite a legacy - after all there have been some big models along the way. But it is with this particular car that the company begins a new innings.

Why, you ask? The 488 GTB is the first of the illustrious family to get a turbo-charged engine. And while many purists have been immediate and vocal with their disapproval, I am willing to give this car a fair chance. Well, more than just a fair chance - and no of course the brand and the colour of my test car have nothing to do with it!

You saw it with the 360 Modena and the F430; it's the similar with this car and the 458 Italia. There's so much similarity in styling that you might be forgiven for thinking, hey is this just an update? But its not I can assure you, in fact the company officials here have told me that the car doesn't share 85% of its parts with the 458! That's right, almost all of it is brand new. The only obvious carryovers that you notice are things like the roof, which is the same as the old car's. The most significant changes have been carried out to specifically increase aerodynamics (like the new door handles) and to increase downforce.

There is a staggering 50% more downforce on this car and that has happened courtesy special features that've been added in. The F1 inspired double spoiler in the front, coupled with the aero-pillar help divert air more quickly and effectively. The car's underbody is also reworked and now has vortex generators which almost suck the car down to the road.

You do instantly feel it when you're driving too, as the 488 grabs the road and has a terrific sense of control. Then there's also the innovation at the rear - a blown spoiler at the base of the rear windscreen which takes air in and sends it out through the rear bumper. Very cool! The whole attempt really is to make the car performance-oriented - almost like the 458 Speciale was - but by still staying a true road car.

Inside you get a more minimalist cabin, which you customise and personalise to your liking. The lower dash is finished in bright red leather, and there's plenty of carbon fibre trim on the dash, door panels and central console. The F1 steering still houses all the controls, including the indicators; and Ferrari's now famous Manettino that allows you to change the car's driving character. The 488 GTB also features keyless entry and start.

Check Out the Ferrari 488 GTB Gallery

F154 is the name of the new family of turbo-charged engines that come to you from Ferrari. The first time we saw this family breaking cover was with California T and of course Maserati models will also use the same engine. But the most powerful iteration with 670 horses goes into this car only. There's been much hullabaloo about the fact that Ferrari has gone turbo, leaving naturally-aspirated engines behind. And yet interestingly, when I spoke to the engineers here at Ferrari, they told me their number one goal while developing this new unit was to make sure that the character of the engine remains very naturally-aspirated like.

This is now Ferrari's most high performance engine ever. The 3.9-litre unit churns out 670 horses - that's 172 bhp per litre of displacement, which is a new record for any Ferrari road car - ever. The car has a mind-numbing 760 Nm of torque, and peak torque only arrives in the 7th gear. The 7-speed F1 dual clutch gearbox features specific ratios to make the most of the massive torque. Variable Torque Management keeps providing more and more torque up the gears to give you the best acceleration. Torque is artificially reduced at lower revs and it's only in the 7th gear at 3000 rpm that you hit peak torque. So, otherwise this car could potentially be even faster if you were allowed to access that torque lower down.

When you are aiming for sharp dynamic response from the engine, you have also got to ensure that the brakes complement that, which is why; the car actually gets the high-performance Brembo Extreme Design brakes that were first made for the LaFerrari. So braking capability is lot better, and braking distance is shorter than the 458's.

The car can go 0-100 km/h in 3 seconds flat! And goes 0-200 km/h in just 8.3 seconds. On the curving mountain roads around the Emilia Romagna countryside, I got a great sense of how road-worthy this car is. It is extremely quick, precise, and yet very comfortable - never once overwhelming me to the point I felt I couldn't control this steed! It therefore is now perfect for everyday use, and also much much longer drives

As I drove around the countryside, the thing that amazed me is how every time I get around in this part of world in a Ferrari, I get a sense of tremendous respect from the other motorists. It is not just the awe for the brand or them thinking - 'Oh look, there goes a Ferrari'. They make space for you, wave out to you, and you can tell they really feel proud that this car comes from this region. That's incredible!

After I was done driving for over half a day on the road, it was time to head back to Maranello and get on to the famed Fiorano track - Ferrari's own test track for its Formula one and road cars. I was told in 2005 that I was the first Indian journalist to drive on this track, so coming back here brings back several fond memories!

The 488 was born for this mission and takes to the Fiorano's curves with aplomb. On the straight is when you can belt it and feel its true power coming through - and getting past 250 km/h is a breeze. Product development at Ferrari always takes in a lot of inputs from Formula One of course, but what's more interesting to me is now how much makes its way into cars like the 488 from other track-only and road cars. I already told you the brakes are from the LaFerrari, and the 488 also has the quicker steering rack from the 458 Speciale, and an even better iteration of the Speciale's SSC1.
The Side Slip Control is now called SSC2 in the 488, and while it acts via the electronically controlled limited slip differential, it's now less invasive. It also integrates with the car's F1-Trac and E-Diff and controls the active dampers so that the car retains its poise even as you try and throw all caution to the wind. Exhilarating? You bet!

The Fiorano track is almost 3 kms in length and is the perfect testing ground for any new Ferrari. I had the car's Manettino set to CT Off, which means most electronics are off and you have almost all the control in your hands. The 488 allows you to slide about and yet snaps back to the intended line of travel with effortless ease.

The chassis is very forgiving, and you get no sense of understeer. And for me, this is where the turbo makes the real difference for me. The slight lag and the extra dose of torque you get from the twin scroll twin turbo, give you a neater entry and exit on the oversteer. As I said, the chassis is terrific and the car becomes easier to drive as a result.

I could have lapped Fiorano a few hundred times if I had the chance! But had to very reluctantly give up that dream! So I finally drove back into the pit lane, after a cool down lap.

It is never easy leaving a Ferrari behind - and I have to say this one has truly impressed me. Maybe that is also because I approached this car with all the questions hanging over it being turbocharged. Having spent a generous amount of time with the 488 GTB, I can safely say that the turbocharged Ferrari V8 is a dream. The 488 GTB is a fun, precise, and superbly engineered car that seems to do everything right and sounds great doing it! Now if only it could follow me home! It will launch in India in a few months. And never mind the prices... right?