It is one of the more affordable motorcycles in India which has an in-line four cylindered engine! Yes! It is the Suzuki GSX-S750. After a stint at BIC a few months ago, we finally get an opportunity to ride this Japanese naked sport motorcycle on regular roads. View Photos
The Suzuki GSX-S750 is

Sounds! To a listener with intent, they have the ability to tell a story in its entirety. And those sounds are my earliest memories of having anything to do with cars and bikes. Legend has it (read parents) that I, as a kid, had this uncanny ability to identify the sound of my father's motorcycle from a distance, amongst all other vehicles. And I was right ten out of ten times. Fast forward two decades and I find myself, in front of a glowing laptop screen, describing the aural excellence of the Suzuki GSX-S750. Simply because I had the opportunity to ride this baby, finally! And also because the roar of the in-line four engine had me fall for it hook, line and sinker! I would buy the motorcycle just for the raw, carnal intake roar and meaty exhaust note, which makes you giggle like a kid in a candy store and if you wring the throttle really hard, it is scary enough to give you goosebumps. Right! Let's get on with the review, then! (The GSX-S750 borrows its looks from the GSX-S1000, which happens to be its elder sibling)

In a nutshell, it borrows its design cues from the Suzuki GSX-S1000 and that is not a bad thing at all. The GSX-S750 gets a butch, muscular fuel tank with giving it the exact persona of an angry bull waiting to charge at you, stomping its feet on the ground. The looks are further accentuated by fat forks and a fat tyre up front along with the angular headlamp. We do wish that it had more elements of blue on the sides. The black bits kind of dull things up and this is a rare Jap which doesn't have 'dull' in its dictionary. The rear section too is sharp, with a raised rear seat and capped off with a smart-looking LED tail lamp. Overall, it is one of the meaner looking motorcycles in the naked middleweight segment, possibly only to be outdone by a certain Italian!

Also Read: Suzuki GSX-S750: All You Need To Know

A motorcycle for the purist? 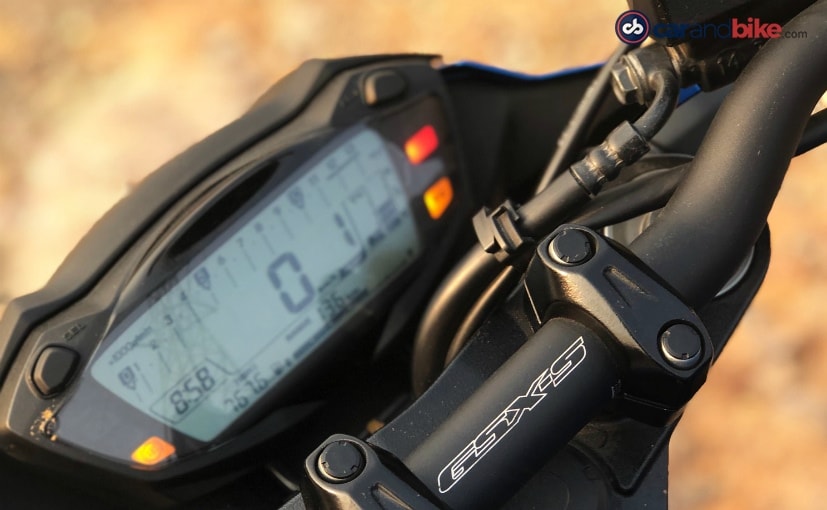 The bigger Suzuki motorcycles that are on sale in India are raw in nature! They are not known for having gazillion electronic nannies. The GSX-S750 is one such motorcycle too. All it gets is ABS which has eight settings and a three-step traction control system that can be turned off. The front forks are 41 mm Kayaba units and the brake callipers are from Nissin which grip the twin 310 mm discs up front and a single unit at the rear. Not quite top-shelf parts, but they do the job well. You do get a full LCD instrumentation console which offers a decent view of information on display. One can also adjust the brightness and choose from five display patterns. 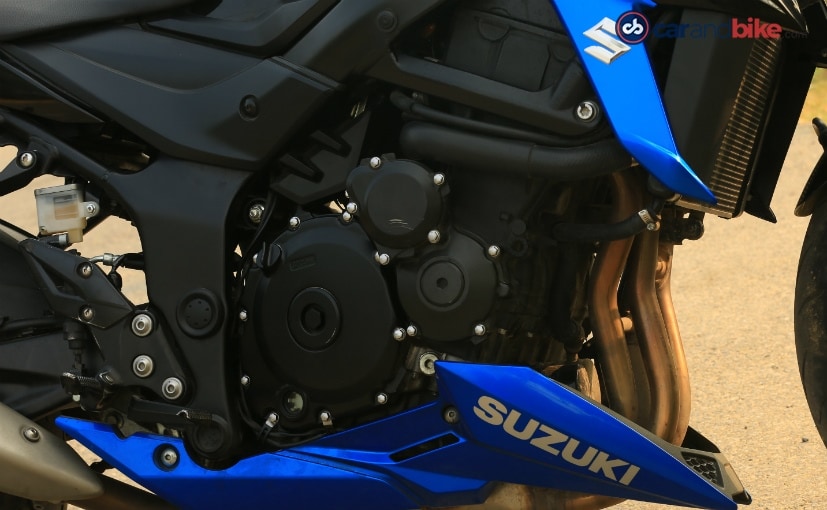 Exhilarating! The Suzuki GSX-SS750 gets a 749 cc in-line four cylinder motor that makes about 112.6 bhp at 10,500 rpm and 81 Nm of peak torque at 9,000 rpm. All of that power and torque is transferred to the rear wheel with the help of a slick 6-speed gearbox. Now, it might not seem a lot, some of the other motorcycles in the same segment offer more power and torque but the USP here is how the power is being delivered. Suzuki also offers a 'low RPM assist' system wherein the engine revs a bit higher when you release the clutch, helping to keep things smooth and the engine from stalling. It is a big help when you are riding the GSX-S750 in traffic. 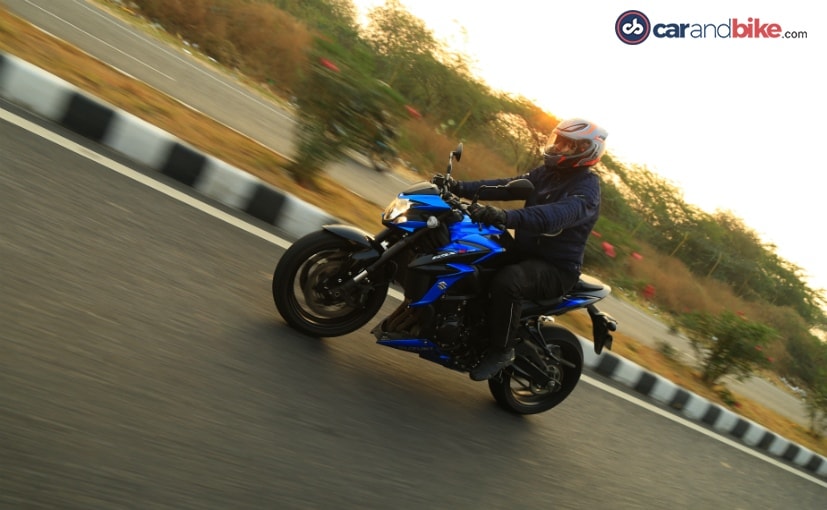 (The engine really breaks into a song as the revs go past 6,000 rpm)

Till about 6,000 rpm, things are nice and easy. You be gentle with the throttle and the motorcycle moves forward in a predictable, almost docile manner, always complemented by that nice intake howl. And even at those revs, the exhaust starts belting out a lovely number. The engine itself is so refined and smooth that there isn't the barest hint of vibration anywhere on the body. Twist the throttle hard, let the revs climb up freely and it is then, that the motorcycle gets into its true being and the exhaust starts reaching a crescendo, matched by the brutal acceleration. The world goes by in a blur, feeling almost like a dream, which is broken the moment you tap on the brakes, hit a red signal or run into traffic. Oh! And for those of you who are actually thinking of fuel efficiency, Suzuki has an answer to that as well. The GSX-S750 has a claimed fuel efficiency figure of 20.4 kmpl. 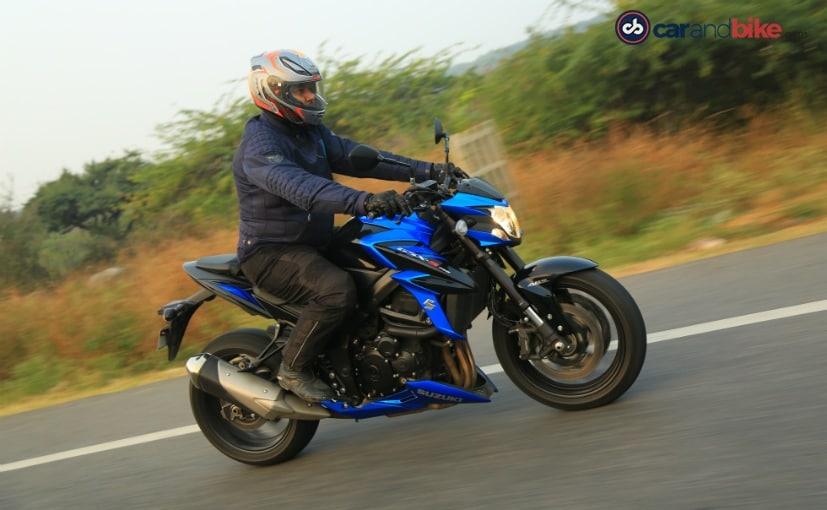 The Suzuki GSX-S750 tips the scale at 215 kg wet which is kind of portly for its segment. You do feel the weight and heft when riding in peak traffic. Also, it is not the sharpest of handlers either. You need to put in effort should you want to filter through traffic, making quick direction changes. But it is definitely not a deal-breaker. The brakes too scrub off speed nicely with minimal drama and good progression. Sure, the motorcycle doesn't take kindly to speed breakers and potholes but that is only because you need to slow down and that is something you do not feel like doing on this motorcycle. But when you do hit bad roads or broken tarmac, it will not be a bone-jarring ride. The suspension is taut but supple enough to absorb a few undulations on the road. 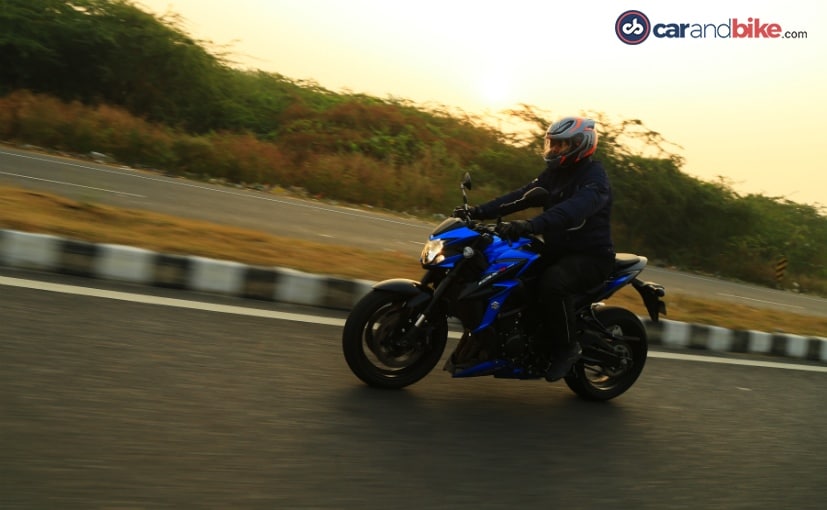 Just looking at the motorcycle makes you shed all inhibitions of being a careful, wary rider. It is almost as if the GSX-S750 is luring you into this sense of being untamed. It entices you to go fast and hard, as much as your riding skills allow you to and you end up doing exactly that! The Suzuki GSX-S750 is perhaps the most practical, likeable motorcycle that you could buy in the naked middleweight segment in India. It doles out performance by the bucketful, has killer looks and what makes the deal even sweeter is the price! At ₹ 7.46 lakh, it is one of the more affordable in-line four motorcycles that you can lay your hands on. The power delivery is not overwhelming and the smooth, refined nature of the bike makes for a great rideability. There are other options too such as Triumph Street Triple, Ducati Monster 821 and the Kawasaki Z900 but the value-for-money quotient is quite high with this one!