Modern classic or an adventure motorcycle? Is it a case of mistaken identity or is it really a proper 'crossover' between the two segments? We ride the all-new Triumph Scrambler 1200 XC in Portugal and seek out answers. 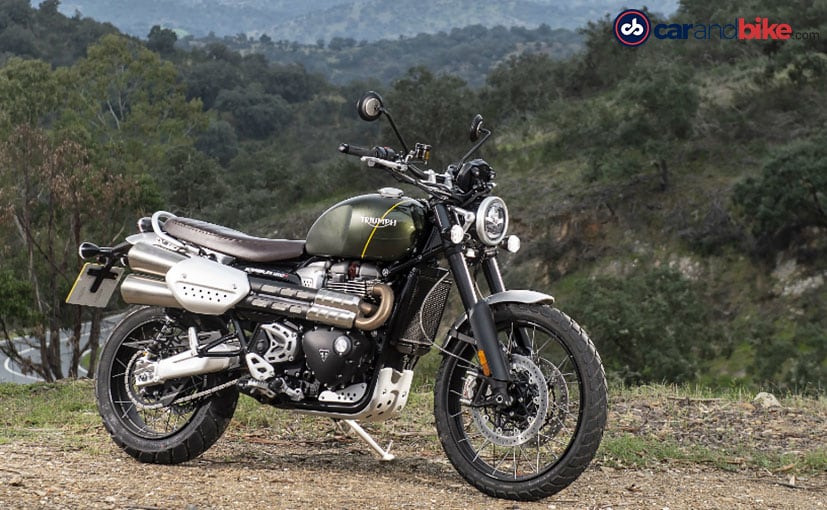 The fact that modern classic motorcycles form a lion's share of Triumph Motorcycles' sales is no secret. Even with a near-comprehensive range of modern classics, Triumph endeavours to offer one for each kind of a motorcycle enthusiast. Right from the Street Twin to the Thruxton R and everything in between! The Triumph Scrambler 1200 is yet another model to join the ranks of the company's retro-styled range. But is it simply a variant of the Bonneville family or is it a bigger, better version of the Street Scrambler? Well, the answers to those questions are in the story below, so read on! 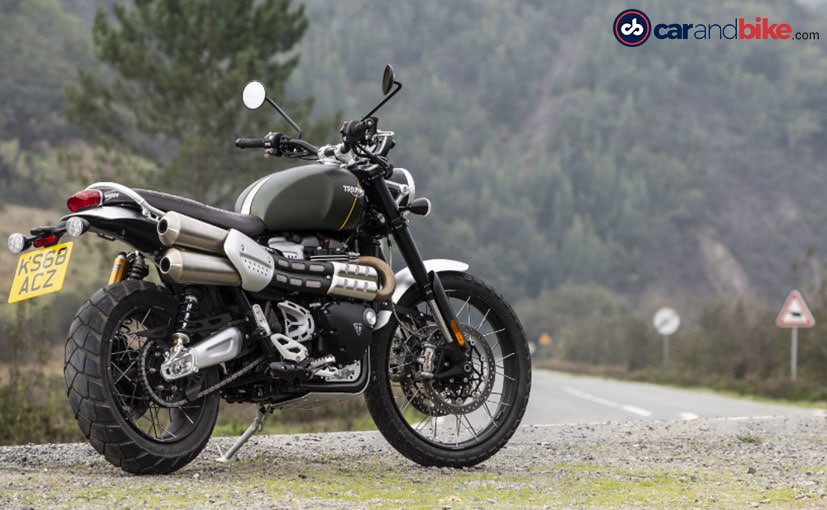 The Triumph Scrambler 1200 was three years in the making and the company wanted to create a motorcycle that resonated with the old TR5 Trophy from the 1950s. Therefore, the design had to be such that not only the Scrambler 1200 looked the part, but also have exceptional off-road ability. In fact, Triumph itself calls the Scrambler 1200 a cross between a modern classic and an adventure motorcycle. 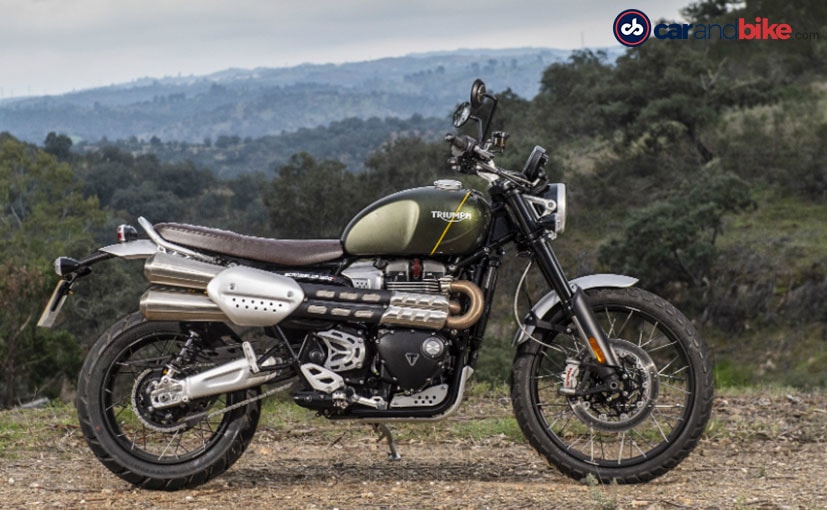 It is a classic case of function over form! The Triumph Scrambler 1200 might not the best-looking retro motorcycle, but it means business! The round LED headlamp along with retro-styled fuel tank, ribbed single-piece seat and those high and side-mounted twin exhausts make it look 'built for purpose'. So, in terms of equipment, the Scrambler 1200 gets 45 mm Showa cartridge type USDs and at the rear, the bike gets Ohlins twin shock absorbers. Both units have travel of 200 mm and are fully adjustable. Coming to the brakes, the Scrambler 1200 gets two 320 mm floating Brembo discs with a 4-piston M50 Monobloc calliper. At the rear is a 255 mm single disc with a 2-piston calliper. The wheels are wire-spoked, with a 21-inch unit up front and a 17-inch unit at the rear. The bike is shod with Metzeler Tourance dual-purpose tubeless tyres but can be ordered with Pirelli Scorpion STR off-road tyres too if you like hitting the trails. 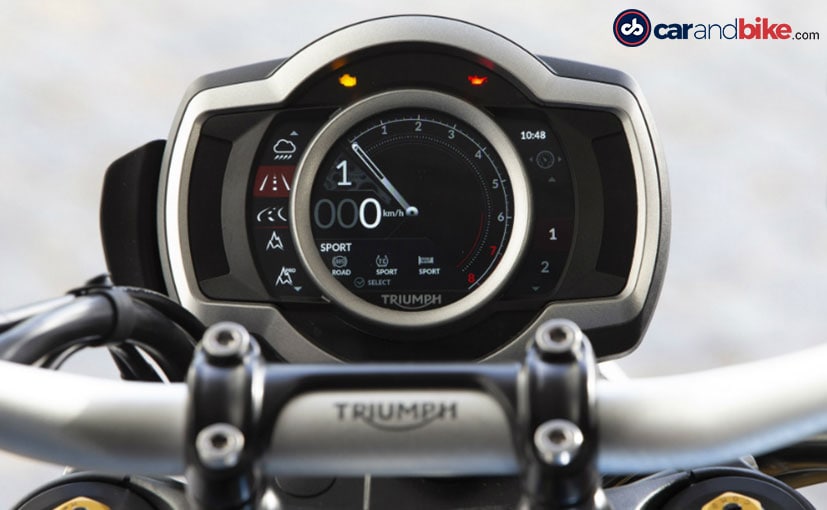 The Scrambler 1200 XC gets the second generation TFT instrument console which looks cool and offers a bunch of information. It has two themes, Quartz and Chronos which again can be configured in three formats. Plus, you get ride-by-wire, 5-riding modes (Road, Rain, Sport, Off-Road and Rider), all LED lighting, keyless ignition and cruise control. What is also new is that Triumph offers turn-by-turn navigation and smartphone connectivity via Bluetooth and for the first time, it has partnered with GoPro and offers GoPro controls with the optional Bluetooth module as well. We tried it out and it works wonders. You can change the settings of your paired GoPro right from the left switchgear, without taking your hands off the handlebar, on the go. Quite cool, we think! 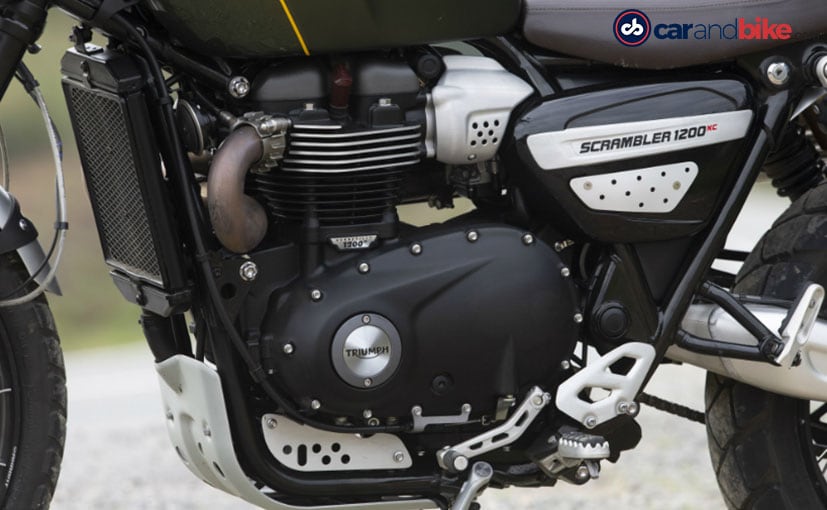 The Scrambler 1200 XC gets the same 1200 cc high power parallel-twin which is liquid-cooled and pumps out about 90 bhp at 7,400 rpm and a massive 110 Nm of peak torque at a very low 3,950 rpm. Yes! The full surge of torque comes in before you hit 4,000 rpm. There is a 6-speed gearbox with a torque-assisted clutch that is smooth but has that typical 'clunk' of a Triumph modern classic. 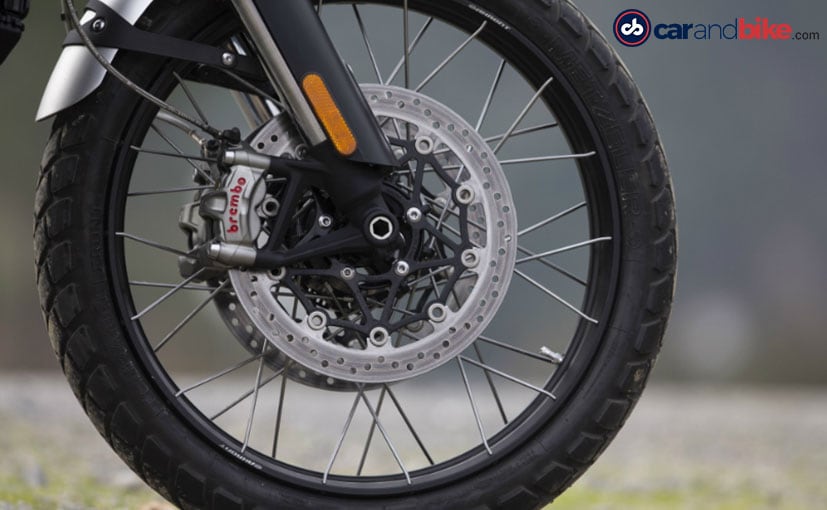 Thumb the starter and the engine fires up with a nice bass-laden burble and as you work your way up the gears, you wouldn't even realise when you crossed 100 kmph. With its endless reservoir of torque, the Scrambler 1200 XC will leave everything behind, be it on the road or off it. Should you want to rev it hard, the motorcycle will be happily reach triple digit speeds in the 4th gear and there is enough power for it to keep cruising at 100-120 kmph all day long without missing a beat. Even with a big 21-inch wheel up front, the Scrambler 1200 XC proved to be a nimble handler, carving corners in and around the hills at Faro, Portugal. Yet another pleasant surprise! But off-road is where we spent maximum time and when the tarmac ends, it is then that the Triumph Scrambler 1200 comes alive and into its element. 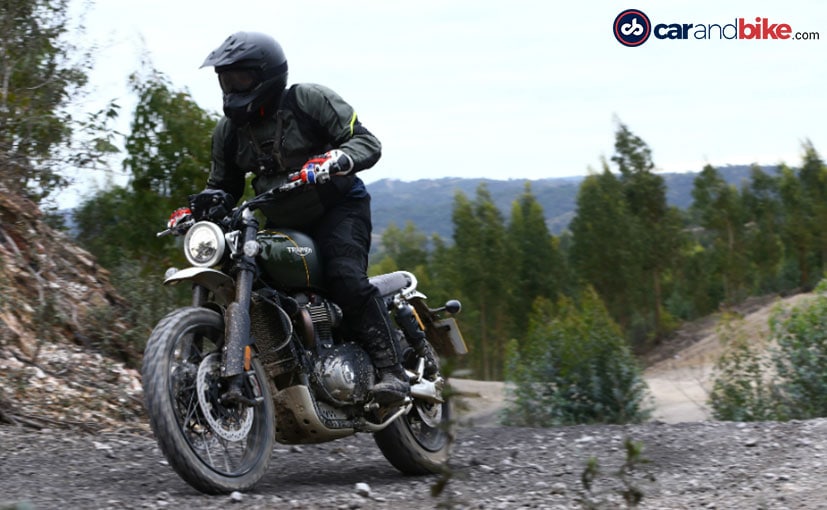 We explored some lovely trails with the Triumph Scrambler 1200 XC

In our opinion, the Scrambler 1200 has the potential to make all big, burly adventure bikes redundant. The frame, the swingarm and the long travel suspension are enough giveaways that the Scrambler 1200 is much, much more than a Bonnie on stilts! We started our day riding through some lovely trails with the Scrambler 1200 XC, shod with the optional Pirelli Scorpion STR off-road tyres. We encountered all sorts terrain, right from loose gravel, sand, rock and even the occasional mud and slush and the motorcycle just couldn't be happier doing what it did! 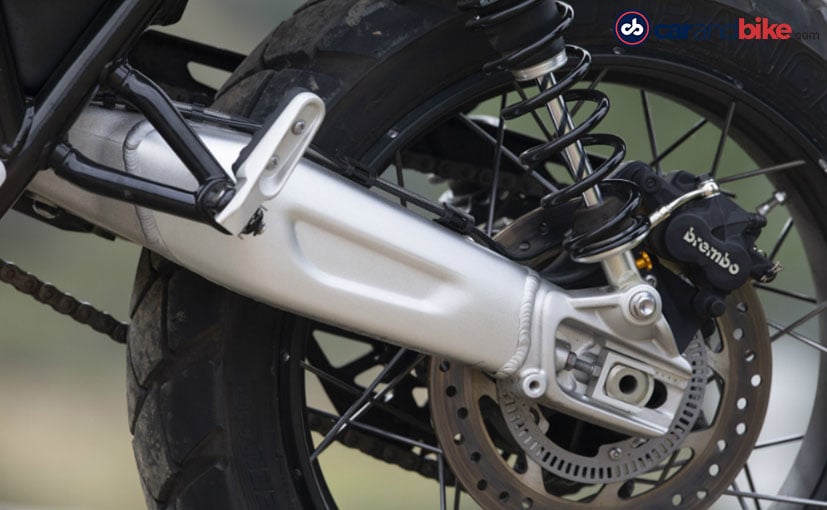 Give it the beans around a corner and you will see the rear sliding out in the opposite direction. Sure we did have a few tight situations, but all you needed to do is to keep the throttle going. With the off-road mode on, the ABS is disconnected to the rear wheel and traction control intervention is minimal, the bike keeps you upright at all times. Even with dual shock absorbers at the rear, the suspension in itself is off the charts. It took on some really tough terrain and soaked up all the bumps, rocks and everything else with aplomb. The biggest advantage here is that you as a rider take less beating and can carry on riding off-road for longer hours. Whether you choose to sit down or stand up on the pegs, the riding position feels natural and comfortable. 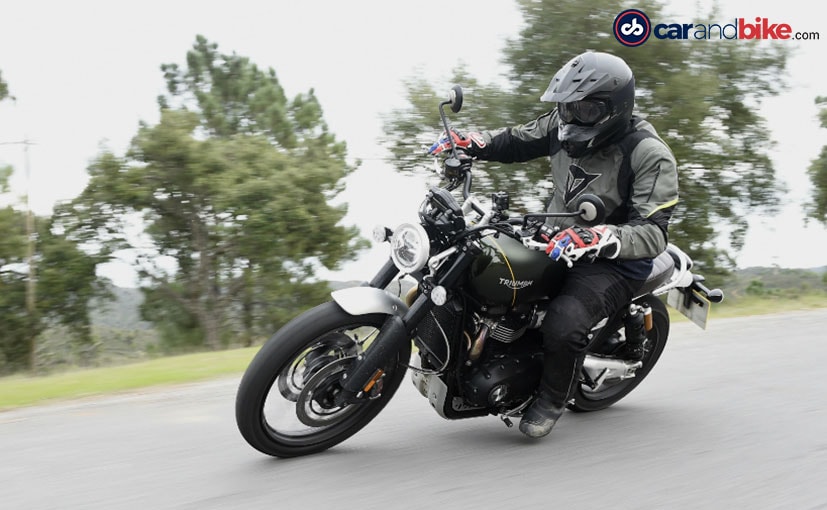 In terms of dry weight and seat height, the Scrambler 1200 XC is similar to the Tiger 800 XCx

It would surprise you to know the Triumph Scrambler 1200 XC weighs in at 205 kg (dry) which is exactly the same as the Tiger 800 XCx and is 6 kg heavier than the Tiger 800 XR. But with visibly less bulk, in your mind, this becomes an easier motorcycle to manhandle. It is easily more flickable than the Tigers and more confidence inspiring when it comes to tackling proper off-road terrain. The Scrambler 1200 has ample proportions and weight but all of it magically disappears when you are on the move!

At 840 mm, the seat height on the Scrambler 1200 XC is again similar to the Tiger 800 XCx but it just doesn't feel as daunting as it could on the Tiger. It is a testament to Triumph's effort of offering something which is every bit as capable as the Tiger off the road and still much more manageable, at least in your head! The Scrambler 1200 XC also proves Triumph's ability to make solidly built motorcycles which can take a beating and yet remain rattle-free. The engine never runs out of steam when revved hard at low gears and with the suspension sprung right and 200 mm of ground clearance, the Scrambler 1200 XC should be your choice of ride if pure, unadulterated off-road bliss is what you seek. 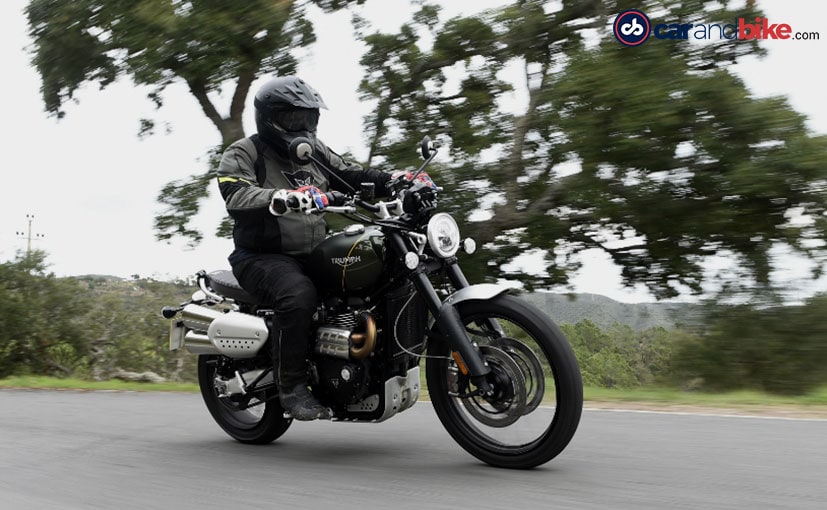 Triumph deserves applaud for coming up with a motorcycle which not only has immense capability and has top-notch specifications along with immaculate build quality. Keeping the design of the bike period-correct and still offering solid off-road performance, Triumph just might end up cannibalising its sales of the Tiger 800 and we mean that in a good way. If you like to go touring with luggage and pillion, of course the Tiger is the better option. But if you are a lone wolf and love to go trail-riding often, then the Scrambler 1200 should be your pick. For now, Triumph will launch only the lower-spec Scrambler 1200 XC in India in the first half of 2019. The higher-spec Triumph Scrambler 1200 XE takes things to the next level with even more features, but might not come to India in the near future. Also, the good news is that the Scrambler 1200 will be manufactured in Thailand from the beginning so expect the Scrambler 1200 XC to be competitively priced. Our expectation is about ₹ 12.5 lakh - ₹ 13 lakh or so.

Buying A Used Two-Wheeler vs A New One: Pros And Cons