The new Ghost comes with a host of new updates with regards to design, styling and features as well. It's built on the company's aluminium spaceframe architecture and is powered by a 6.75-litre twin-turbocharged V12 petrol engine. 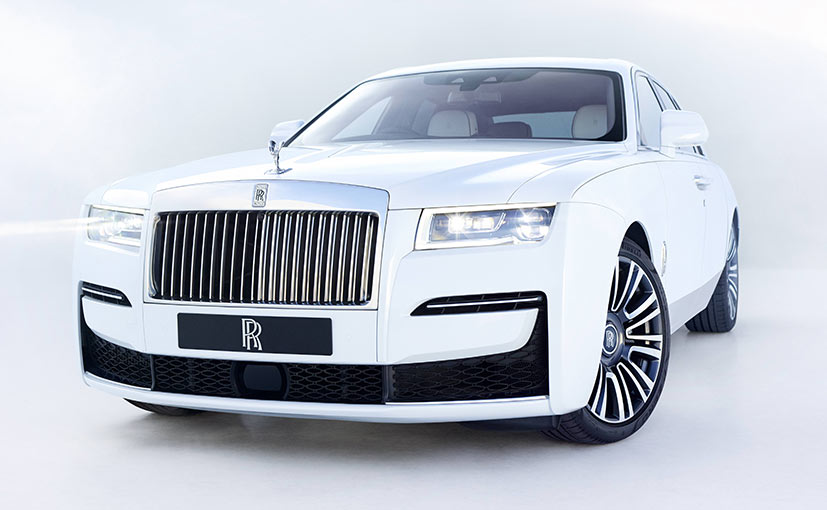 View Photos
The Rolls-Royce Ghost is built on the aluminium spaceframe architecture, like the Phantom and Cullinan

The much-anticipated new-generation Rolls-Royce Ghost has finally made its debut. The car is built on the company's new aluminium spaceframe architecture, which also underpins its flagship model Phantom, and the company's first-ever SUV - the Cullinan. The new Ghost comes with a host of new updates with regards to design, styling and features as well. The spaceframe architecture's flexibility and scalability also allowed Rolls-Royce to incorporate several mechanical updates, including features like all-wheel drive and all-wheel steering in the new Ghost.

The previous Rolls-Royce Ghost, which was launched in 2009, has spent a decade in the market and has been a very successful model across various markets, including India. Talking about the car, Torsten Muller-Otvos, CEO, Rolls-Royce Motor Cars said, "To create a new product that would resonate with our Ghost clients for the next ten years meant we had to listen carefully to their demands. Today we set new standards in customer-centricity by creating a completely new motor car for a unique group of Rolls-Royce's clients. These business leaders and entrepreneurs demand more of their Ghost than ever. They require a new type of super-luxury saloon that is dynamic, serenely comfortable and perfect in its minimalism. Ghost is this product." 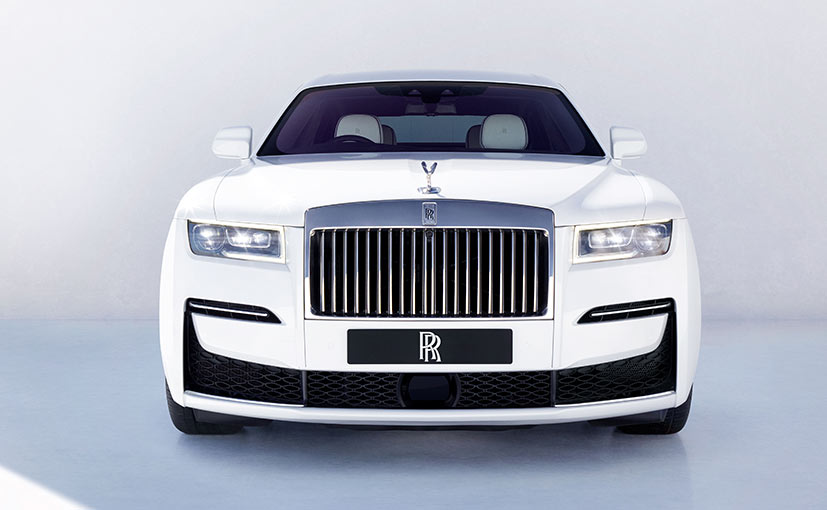 The company says that the new Rolls-Royce Ghost's design is defined by "minimalism and purity" underpinned by great substance. There are sharp bowlines that intersect with an angular light signature upfront and the signature grille comes with 20 LEDs underneath it and LED and laser headlights that help create a striking look at night. Also, the car is longer by 89 mm and wider by 30 mm, and due to the hand-welded aluminium body structures, the Ghost gets a fluid exterior design. Also, for the first time, the Spirit of Ecstasy is not surrounded by panel lines but is placed within the bonnet line to achieve a cleaner design. The car gets an arched roofline with blacked-out pillars, while the rear comes with these almost squared LED taillamps. 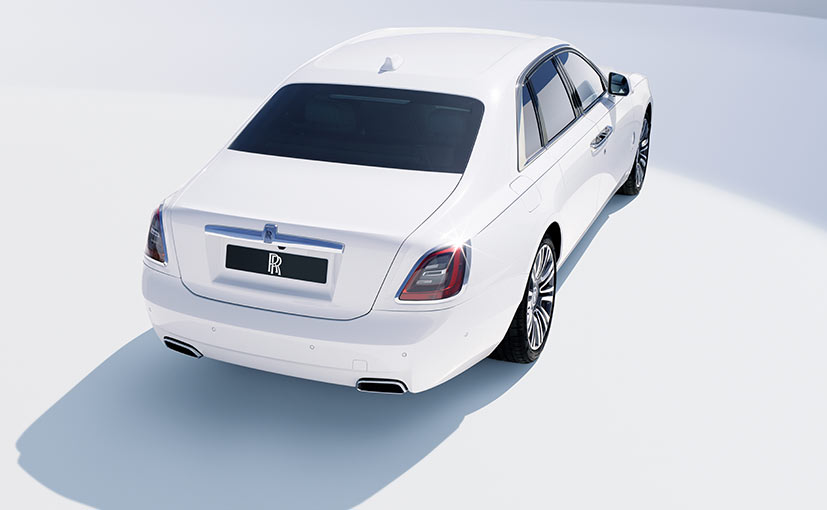 As for the cabin, Rolls-Royce says that the new Ghost strikes a balance between both a driver-oriented and a chauffeur-driven car. The car gets a nice dual-tone white and black interior, along with the Starlight Headliner, which was introduced with the Phantom, that comes with integrated speakers. The all-black steering really stands out, and the dashboard also comes with the illuminated fascia on the passenger side, featuring a flowing Ghost nameplate surrounded by more than 850 stars. This was developed over the course of two years and more than 10,000 collective hours. There is also the signature clock, and at the centre, you have the main infotainment display. 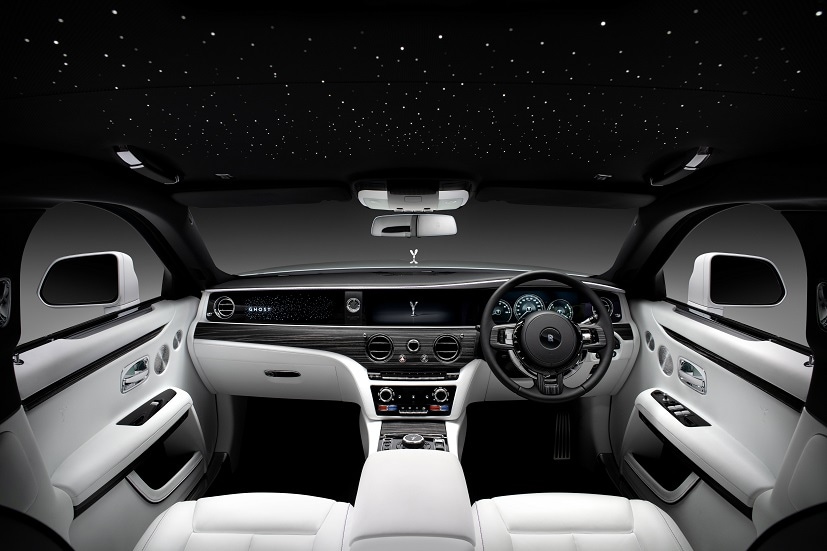 The new Ghost comes with dual-tone white and black interior, along with the Starlight headliner

The car also comes with what Rolls-Royce calls 'Effortless Doors' which can be operated by a button, and, for the first time, the Ghost owners can also open the doors with power assistance. It also comes with a Micro-Environment Purification System (MEPS) that filters cabin air. Other features include - vision assist, including day- and night-time wildlife and pedestrian warning; alertness assistant; a four-camera system with panoramic view, all-round visibility and helicopter view; active cruise control; collision warning; cross-traffic warning; lane departure and lane change warning; an industry-leading 7x3 high-resolution head-up display; Wi-Fi hotspot; self-park; and the very latest navigation and entertainment systems. 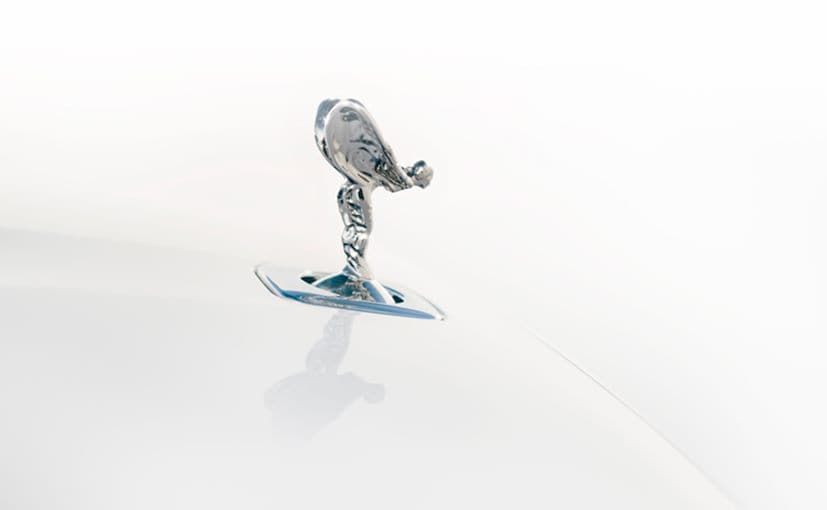 The Rolls-Royce Ghost is powered by a 6.75-litre twin-turbocharged V12 petrol engine. The engine generates about 563 bhp and 850 Nm of torque to the all-wheel steer, all-wheel drivetrain. The engine comes mated to the company's innovative Satellite Aided Transmission system, which draws GPS data to pre-select the optimum gear for upcoming corners. The car also gets Rolls-Royce's same self-levelling high-volume air suspension technology, as well as rear-wheel steering. Both axles are managed via the marque's Planar software, which also governs the all-wheel drive, all-wheel steering, stability control and self-drying braking systems.