With the new Nissan Kicks all set be launched in India in 2019, we recently got to drive the global-spec model in Dubai, and here's what we think about it. 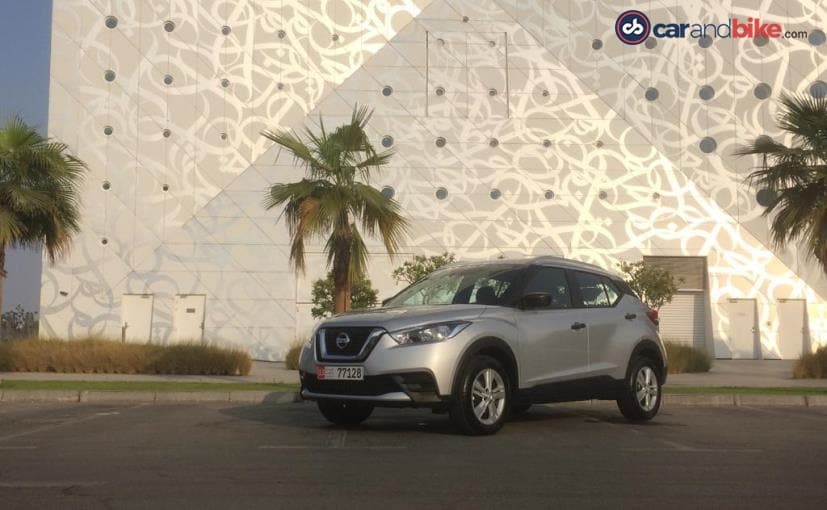 View Photos
The Nissan Kicks that we got drive in Dubai, is not the one that's coming to India

When Nissan first came to India, it brought in two cars into a segment which had become hugely popular - sedan and hatchback. In fact, the Japanese car maker had the first mover advantage over Renault. However, with the launch of the Duster Compact SUV, Renault raced ahead of its alliance partner and well, frankly, Nissan has been playing catch up ever since. However, now, things are looking up and that's because the company is all set to bring in an SUV into the Indian market; one that will sit above the Terrano and compete with the likes of the Hyundai Creta, Renault Captur and even the Jeep Compass. Nissan calls it the Kicks and the company will be bringing it to India in January 2019. It's a global product as far as Nissan is concerned but the one coming to India will cater to the need of the market and will be more upscale than the one that's sold globally. We got a chance to drive the global spec version of the Nissan Kicks in Dubai recently and it's surprisingly good. 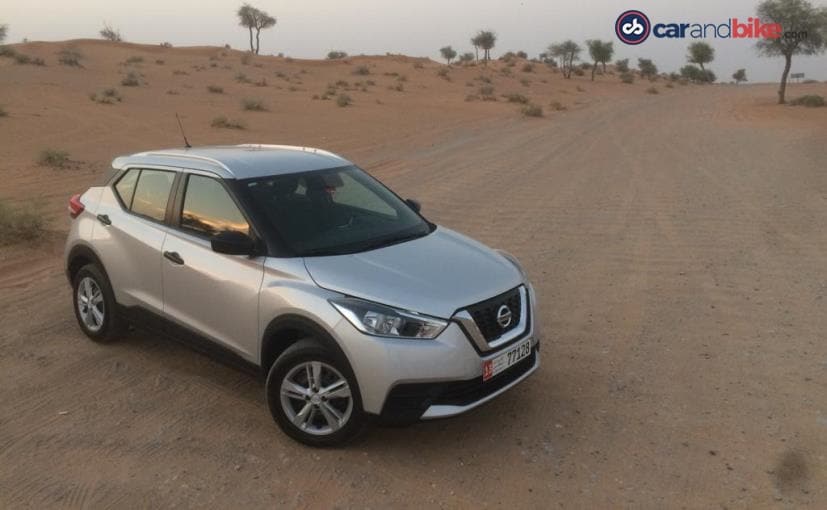 The Nissan Kicks that we got our hands on, is not the one that's coming to India

Now, let me state at the very beginning that the Nissan Kicks that we got our hands on, is not the one that's coming to India. So everything from the size of the vehicle to the engine it has, will not be the same as the India model. This of course means that the Kicks coming to our country will be India- specific but in terms of looks, it will borrow a lot from the global spec variant. 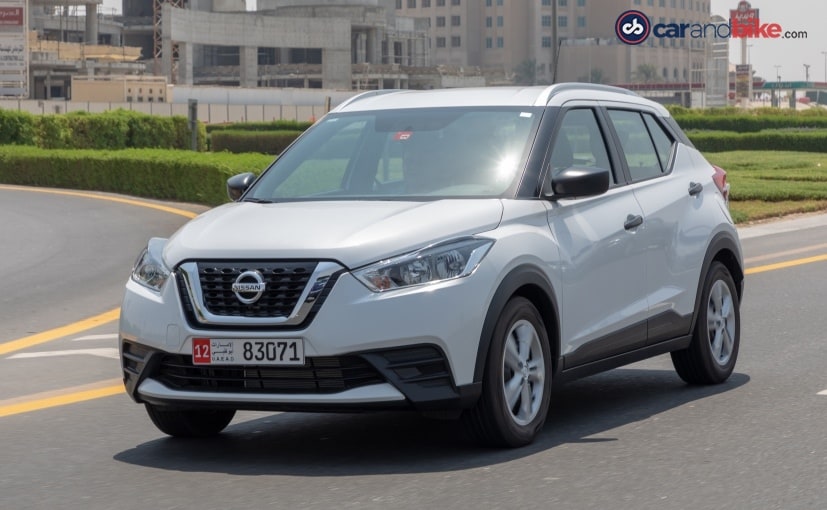 The Kicks was essentially introduced as a replacement to the Juke and for those who were looking for an upgrade well, it was an ideal pick. Sadly, the Juke never made its way to India, so for Nissan customers, looking for a car beyond the Terrano, the Kicks would fit in ideally in this spot. On the design front, it might not be as funky looking as the Juke, but it's pretty handsome. A short wheelbase is capped by a sloping roof, heading into the taillights that can only be described as asymmetrical. Of course, you have a dual-tone roof, which actually looks pretty good and the silver with the option of the orange roof is something that will make its way to India. 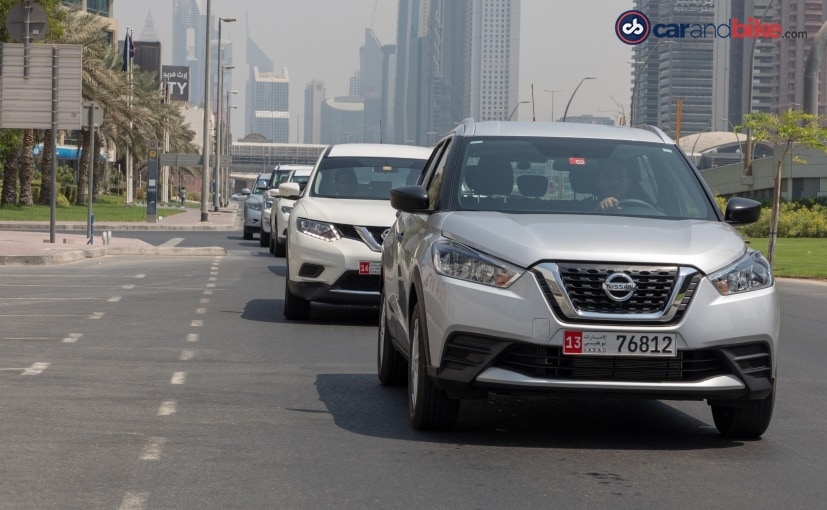 The Nissan Kicks come with the signature V-motion grille, with sweptback headlamps, and aggressive bumper

The V-Motion grille and the floating roofline suit the silhouette of the compact crossover. The tail lamps are angular and that adds to the drama of the SUV. The plastic cladding on side bring out the rugged looks of the SUV. This one is 4295 mm long, 1760 mm wide and the wheelbase stands at 2619 mm. Now, these dimensions differ in comparison to the India-specific model. The one coming to India is longer by 84 mm, wider by 53 mm, while wheelbase has gone up by almost 54 mm, which means there will be more space between the wheels and that also translates into more legroom for the rear passengers. It is taller too and expect the ground clearance to be around 200 mm which then qualifies it as a soft roader. Mind you, in global markets, it is a compact crossover. One might think that Nissan would want to go the subcompact way with the Kicks but that seems highly unlikely. The Kicks that will be launched in India will be based on the B0 platform that spawns the Renault Captur but we wait to know more about what else it shares with the Renault. 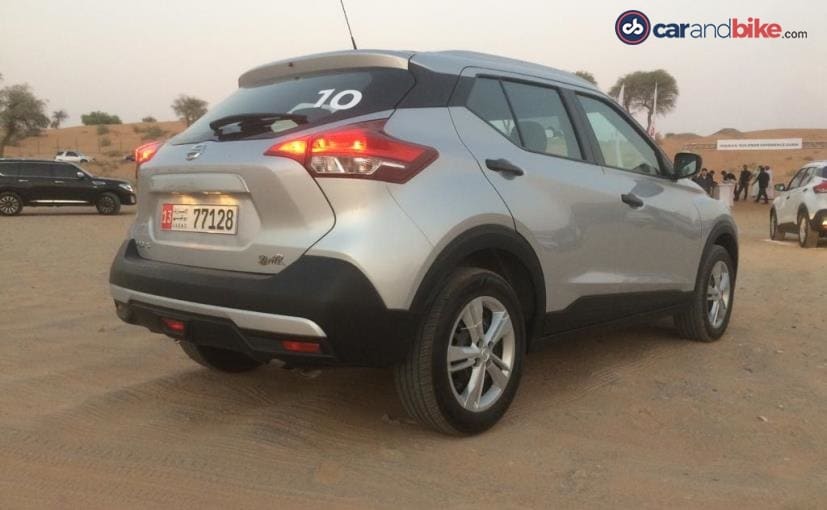 When it comes to interior features though, there's a lot that the global spec model and the India version will have in common. The cabin is a nice place to be in. The Kicks that we drove came with a flat-bottom steering wheel which also comes with steering mounted controls. Now, the car that we drove in Dubai was a base variant and so in terms of an infotainment system, there was just a single DIN system with radio and Bluetooth functionality, so yes unimpressive. But we are told that the one we'll get will come with a 7-inch touchscreen infotainment system which will come with Apple Carplay and Android Auto. We expect navigation to be a part of it too but we'll wait for Nissan to reveal it. There's good amount of space up front but at the rear, there's a bit of constraint when it comes to space. With the driver's seat set to my preference, there's not enough knee room at the rear, but with the wheelbase being more in the India-spec version, expect that difficulty to crease itself out. However, there's good headroom and decent shoulder room too. 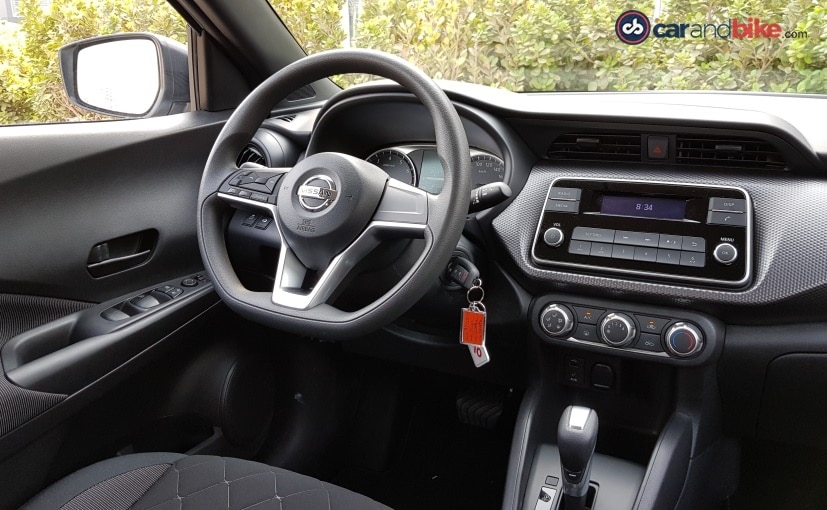 As far as the engine line-up is concerned, well the one I drove came with the 1.6-litre petrol engine which churned out 116 bhp and that's more than the 1.5-litre that we're going to get in India. The 1.6-litre engine is extremely smooth and Nissan's X-Tronic CVT adds to you feeling engaged with the car. The company has paid special attention to the gear changes and they're smoother than what you expect. At high speeds, the CVT keeps up with your throttle inputs and it's smooth sailing. There's a bit of tyre noise, but nowhere is the Kicks unsure of its footing at high speeds. On smooth tarmac, that's fun, but find some roads off the beaten path and this is where the Kicks struggles. The suspension kicks back and it's not a great feeling inside the car. Mind you, the Kicks that I drove, was the global-spec version and based on an entirely different platform. So, the one that we will get will probably not have these issues as it's higher off the ground and is it uses the same setup as in the Captur, then well, it's smooth sailing. 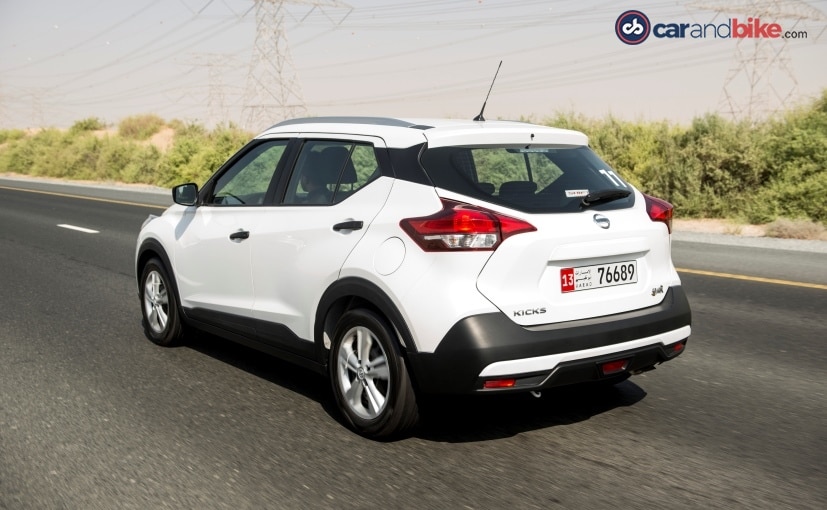 The Nissan Kicks we drove came with 16-inch wheels, while the India bound model will get 17-inch wheels

This one came with 16-inch tyres and the one that India will get comes with 17-inchers and that might make a bit of difference because when you try to chuck this one into a corner, it really is disinterested but the rubber sticks and the lighter steering makes it easier to get the car back on track. Body roll is minimal and that's a big thumbs up for Nissan. 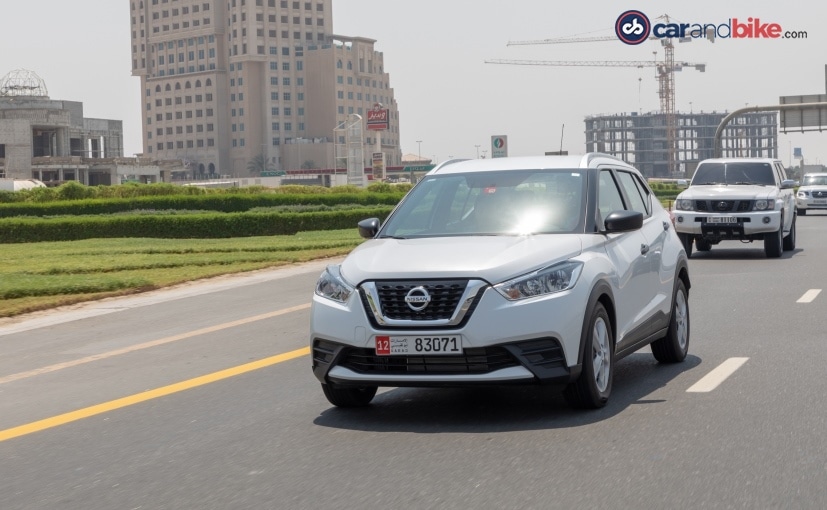 There's a lot to look forward to then as the Kicks holds a lot of potential, not only for Nissan but also for the SUV segment. The design works in Nissan's favour as it's futuristic, compact and elegant and it could help the Japanese carmaker carve out a niche in that SUV segment, something that will help it put its India plans in place and we would get more cars from the company in the bargain. It's crucial for Nissan that the Kicks hits the mark in terms of looks, drivability and even pricing. We expect it to be priced competitively and I won't be surprised if it undercuts both the Captur and the Creta in the form of introductory pricing. Come January 2019, all will be revealed and we'll get to drive the Made-for-India, in-India car too.