We spend some time with the 2019 Triumph Street Twin in Portugal. The largest-selling Triumph modern classic gets updated for 2019, with more power on tap and revised electronics, among other changes. 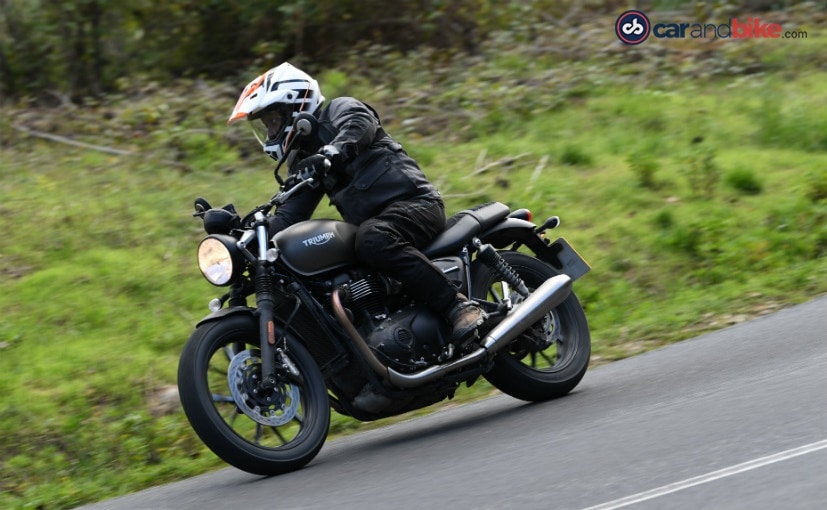 The Triumph Street Twin is the single most popular model in Triumph Motorcycles' line-up, not just in India, but across the world. It's the entry-level model in the Triumph modern classic family and for 2019, the Street Twin gets updated, not just in the features list, but also to the engine, giving it more power, a higher redline and a broader torque curve. So, has the 2019 Street Twin improved over the outgoing model? To find out what exactly has changed, and how different the updated bike is, we spent a day riding the bike in Portugal, along the coast and inland through some twisty mountain roads. 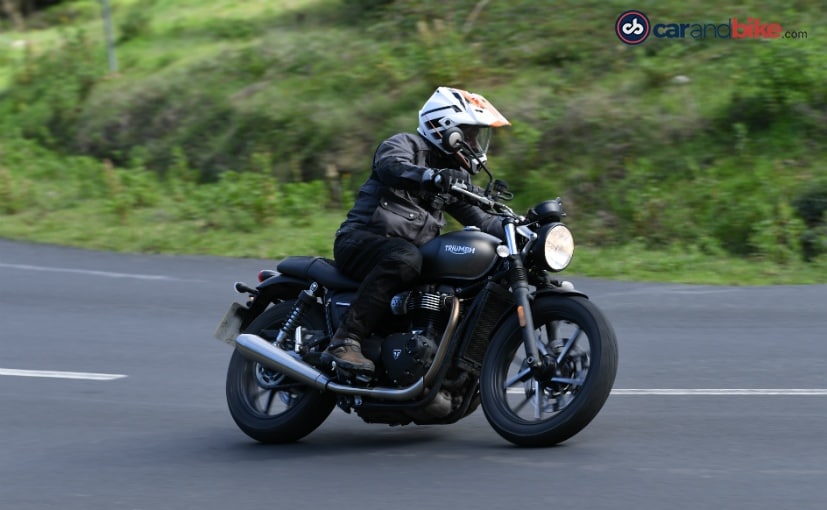 (The 2019 Triumph Street Twin has been updated significantly)

Does it look different?

The 2019 Triumph Street Twin retains the familiar silhouette, but there are some changes in the details. The speedometer gets a new brushed metal "Bonneville" badge, hinting at the Street Twin's lineage, and the decals have been changed. The familiar vertical stripe over the Triumph badge on the fuel tank have been done away with for a cleaner and subtler "Triumph" decal on the fuel tank. The "Street Twin" decal on the side panels is also new and the headlight bezel is now blacked out. The headlight brackets also have been newly designed, giving it a sleek look with the brushed aluminium treatment. (The wheels are differently designed although, the size remains the same)

Also new are the cast wheel design, although wheel sizes remain the same riding position has changed, thanks to the seat height been given a 10 mm lift, with new foam padding. Overall, the 2019 Triumph Street Twin gets a more contemporary treatment, yet retaining the unmistakable Bonneville silhouette. The cast wheels are also new and get a new design, and look slightly different from the outgoing model. And for those seeking to further personalise their bikes, the 2019 Triumph Street Twin is available with a long list of over 140 accessories to choose from, as well as two factory "inspiration" kits to suit individual style and personality. 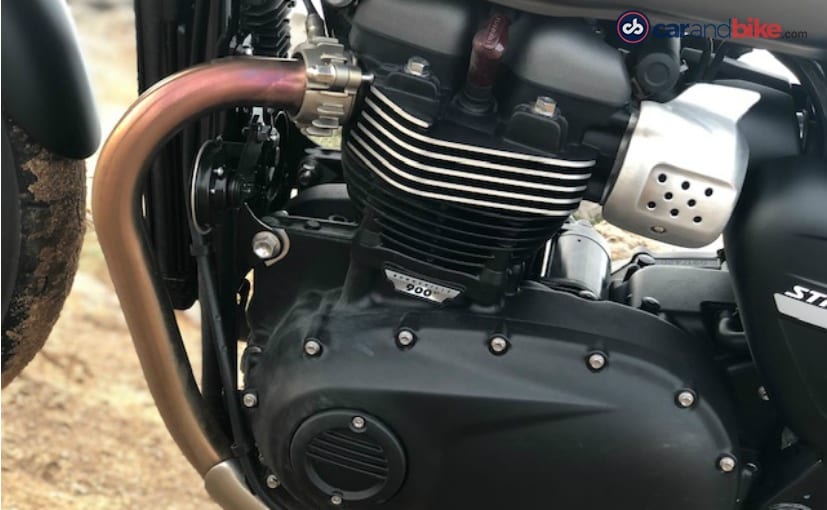 The biggest changes to the 2019 Triumph Street Twin is in the power-plant. The 900 cc, parallel-twin 'high-torque' engine remains the same. So, it has the same 270-degree firing order, and has the same displacement as the outgoing model, but there are significant changes inside. The crankshaft is lighter, the balance shaft and dead shafts are lighter, as well as the slip-assist clutch. And these changes make the engine feel livelier and spin freer, right up to the 7,500 rpm redline. The throttle maps are new, and with two riding modes on offer on the updated model (Rain and Road) there's more safety tech on offer. 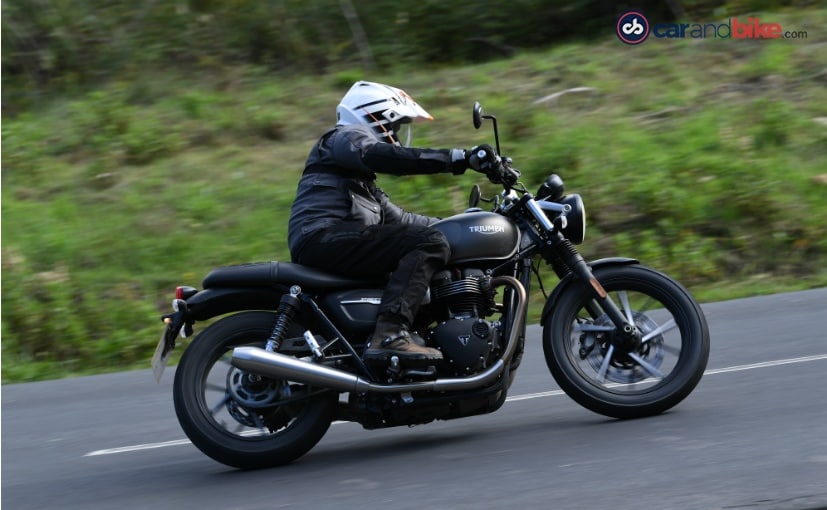 (The engine components have been reworked, making for livelier performance)

More importantly, the engine gets a significant power boost of 18 per cent, a 9 bhp increase in power output. While the outgoing model made 54 bhp of maximum power at 5,400 rpm, the 2019 Street Twin's engine makes 64 bhp at 7,500 rpm. The 2019 Street Twin makes the same torque, 80 Nm of it, but it kicks in later at 3,800 rpm, compared to the torque peaking at 3,230 rpm on the earlier model. The torque on the 2019 model though continues through a wider power band, so there's more thrust, more grunt, and feels brawnier and throatier as the revs climb. The result is a perkier motor, and if the outgoing Street Twin felt out of breath in higher revs to spirited riders, the 2019 Street Twin's updated engine adds that dash of panache and flamboyance to an otherwise smooth and refined parallel-twin mill. And it's quite likeable from the moment you thumb the starter to the nice, bassy rumble coming out from the slightly upswept twin exhausts. (The frame on the new Street Twin remains the same, but the bike gets new suspension)

On the chassis side, the frame remains the same, but the 2019 Street Twin now gets cartridge-type KYB front forks, and even though the 41 mm diameter, and 120 mm of travel is retained, the forks as well as the twin rear shocks are completely new. The brakes have been updated, with a single 310 mm front disc now gripped by a Brembo four-piston calliper, and a single 220 mm disc, gripped by a Nissin two-piston floating calliper on the rear wheel. And the brakes offer superb bite and progression and the standard dual-channel ABS works perfectly. 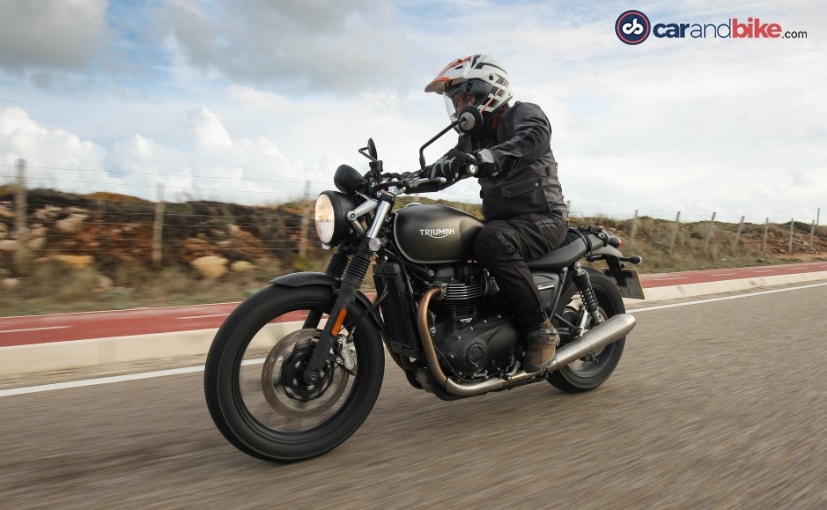 The updated Triumph Street Twin certainly feels like a different bike. The changes to the engine and electronics have given the Street Twin more spunk, and a livelier character. The lazy, low-rev torque is still there, and you can comfortably sit at 100 kmph with the rev counter needling 3,200 rpm, but there's a strong wave of torque that comes in at mid-revs. Keep the engine spinning and it's immediately apparent that the changes on the new Street Twin have transformed its personality. There's more pull, more grunt across the revs, and up to 5,500 and above, the motor keeps the rider entertained. 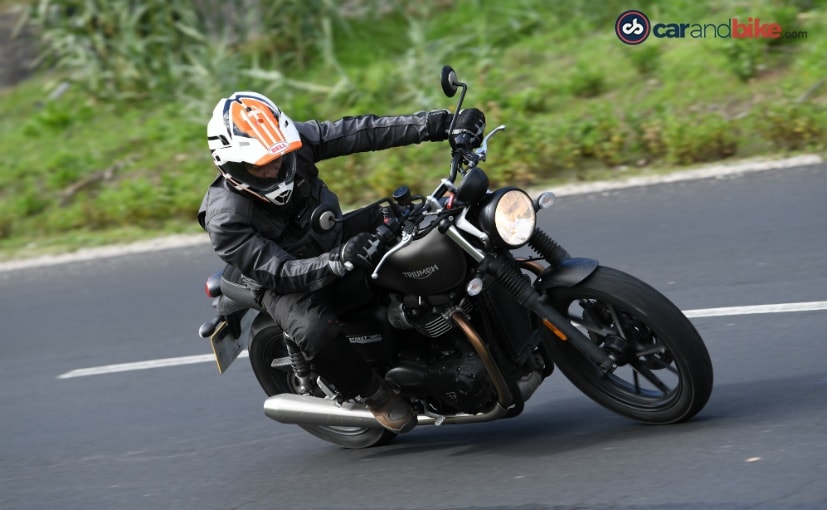 (It might not be a sportbike, but the new Street Twin impressed us with its agile handling)

The riding modes certainly work very well, and even on the wet roads we were riding on, the traction control certainly helped me keep my pride intact, when, around a sharp corner the rear stepped out, but the electronics seems to have immediately sensed the loss in traction and brought things under control. Handling is sharp, and although this is no sportbike, for spirited riding, the new Street Twin can take on a series of corners with impressive agility, perhaps only the footpeg clearance giving way, or the rider's ability, before the bike begins to lose composure. If the outgoing Street Twin left experienced riders wanting for that extra performance, now that seems to have been addressed in the 2019 model! The five-speed gearbox is the same, and the torque-assist clutch has a light feel on the lever, so changing gears in traffic isn't a bother. The gears slot into place with precision, and there was not a single miss or false neutral, but they have a "clunky" feel, rather than precisely "clicking" into place, and that is the only area which left us seeking some more refinement. But then our test bikes are being ridden by different riders and members of the international press from all over the world, and this could just be an issue with the test bikes. 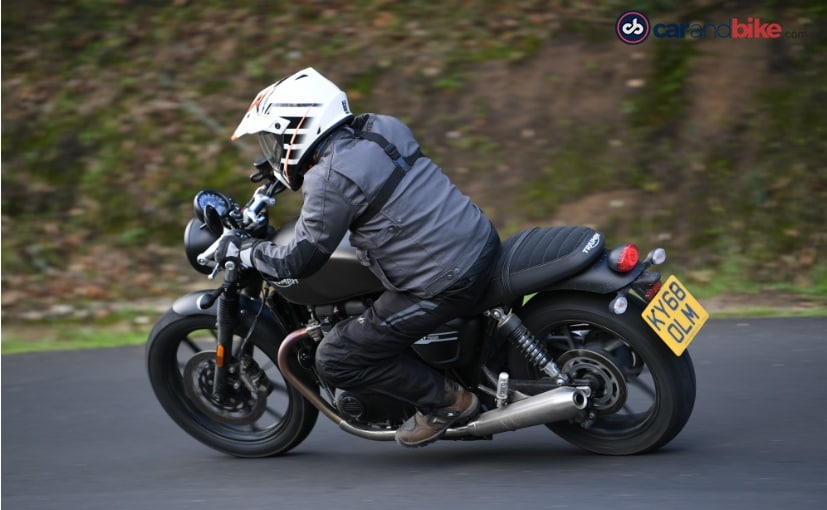 Ride quality is taut, although the roads we rode on in Portugal had a fair bit of cobblestones in the villages around Cascais, the surface is nowhere near challenging as the pothole infested, and broken tarmac of India. So, a judgement on ride quality we'll reserve for once we get the bikes for a full review back home in India after the launch. In all, the entry-level Bonneville just got a lot better, and the extra performance and electronics certainly makes the most-affordable Triumph modern classic a lot more desirable. In India, the 2019 Street Twin is expected to be launched sometime in early 2019, and we expect pricing to be in the range of around ₹ 8 lakh (ex-showroom).