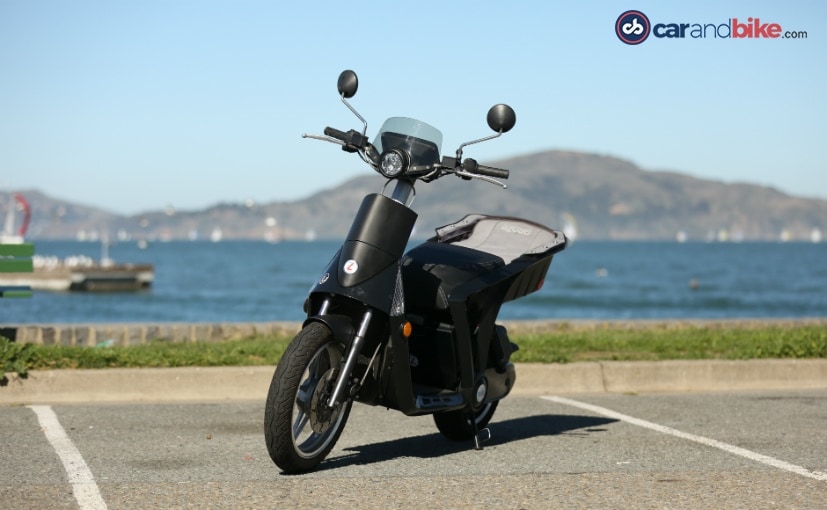 Electric mobility is no longer a thing of the future restricted to the likes of science fiction literature or cinema. It is here, now and the shift from internal combustion to cleaner battery powered vehicles is inevitable. And while here in India we might not all be driving around in our fancy Tesla just yet, there is an ever growing electrification movement that is gripping the nation. Mahindra as a group has been on the forefront of the 'electric revolution' with its Formula E program, the Mahindra e2o and a small Detroit (actually Ann Arbor) based electric two wheeler business called Mahindra Genze. Mahindra Genze makes electric bicycles and electric scooters and considering the fact that electric scooters are a hot topic of discussion in the country today, we flew to the United States to check out these rather futuristic designed scoots.

The electric scooter you see here is called the Mahindra Genze 2.0. In terms of design, it looks like it belongs in the Star Wars universe rather than the streets of San Francisco. While most electric scooters today follow the conventional scooter design language, the Genze seems to do things a little differently. 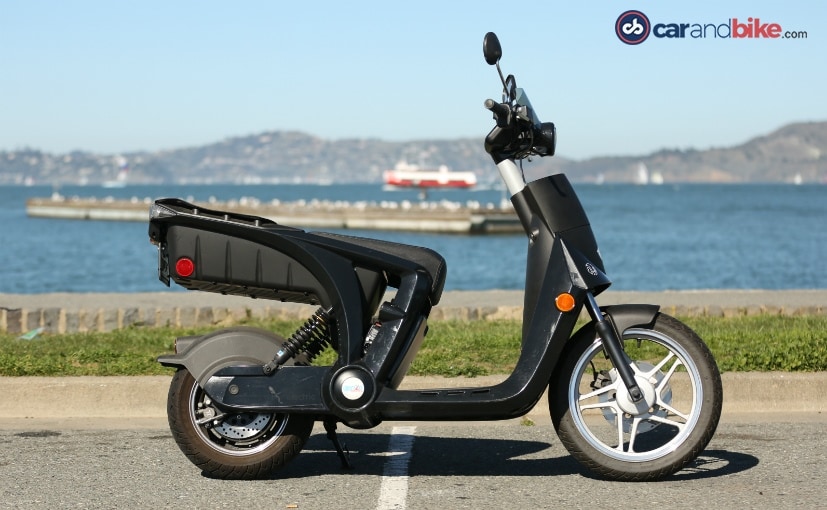 Instead of going for the two-seater application, Mahindra Genze has instead aimed its guns to the single seat application with a small but extremely versatile load carrier at the rear. The reasoning behind this is due to the fact that a single seater scooter adheres to a totally different and non-homologated structure in the United States as it classifies under the moped category as compared to a conventional two seat scooter. 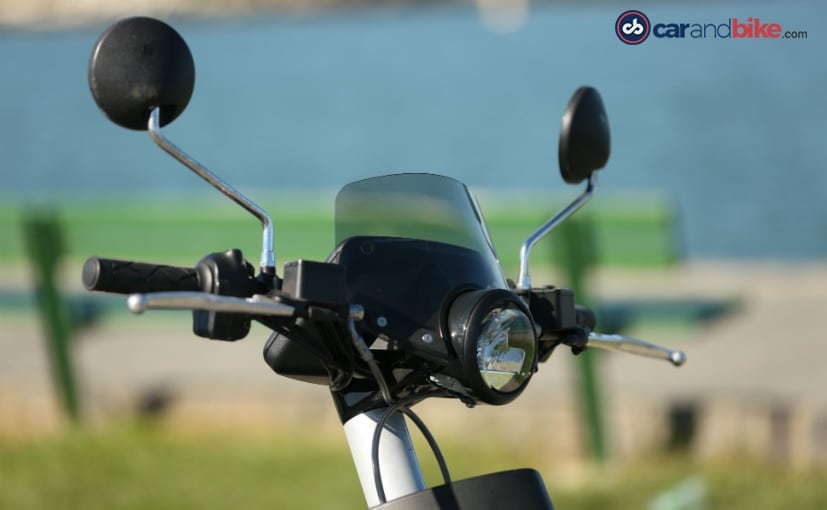 Back to the design then. The Genze has a single round LED headlight mounted higher up than normal scooters and a wide handle bar that too is mounted much higher giving a slightly different riding position. The lower half up front has a cowl like with most scooters and a large 16-inch 5-spoke alloy wheel up front with a 12-inch wheel at the rear. The Genze, unlike other scooters also does not actually get a conventional body. Instead, it features a skeletal aluminium frame that is powder coated and doubles up as the body too. And the frame itself is extremely light at just 21 kg. the Genze is available in four colours from the factory but can be customised depending on how large the order is, mostly from fleet operators of course. 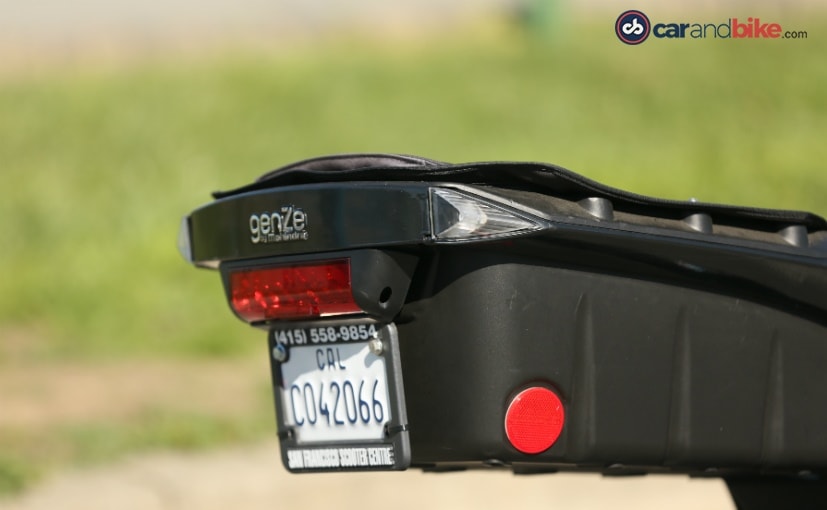 The seat is much much wider and more comfortable than any scooter (electric or otherwise) I have ever ridden. In fact, the large seat almost reminds me of one of those long distance large cruiser motorcycles - albeit without the soft padding. The Genze in the United States spec does not have a key - strange isn't it! Instead what you do get is a push button start with a code that needs to be fed into the touchscreen instrument cluster. And once the code is fed in, all you have to do is turn the throttle and you are on your way. 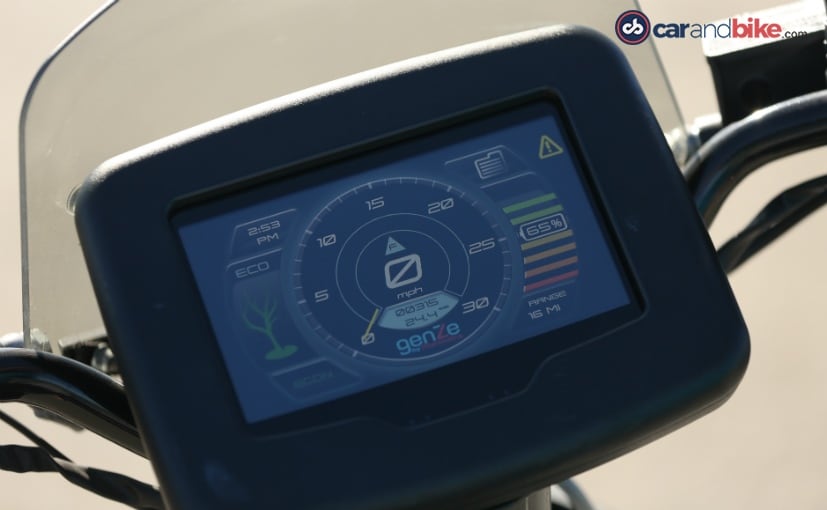 The screen itself is a great unit too. In the normal ride mode it shows you all the necessary information like your speed, level of charge and riding mode. The riding mode itself can be changed on the fly between Eco, Easy and my personal favourite - Sport. The screen also gives you other diagnostic information like battery levels, trip details, usage patterns, etc. that help you monitor the Genze scooter. And unlike almost anything else, the Genze electric scooter is actually linked back to the Genze headquarters in Ann Arbor, Michigan where a technician can actually do real time diagnostics in case there are any issues through cloud connectivity. To add to the techy bits, you also get a smartphone app that helps you monitor all the vital data that you need to know (including range, charge, etc.) along with tracking and the ability to Geo-Fence the electric scooter. Truly cutting edge tech here in such a relatively affordable and tiny package. 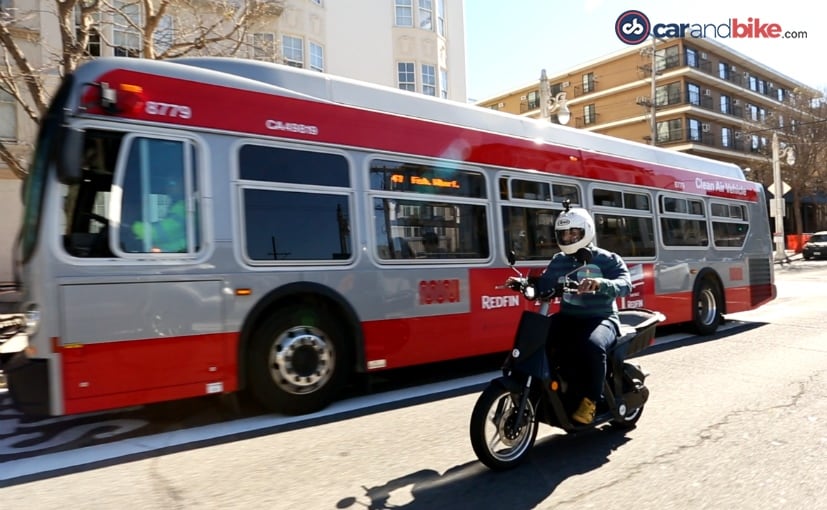 So lets get to the mechanical .... errr .... electrical bits. The Mahindra Genze like so many other electric scooters uses a Lithium Ion battery pack, a 2 kw/hr hub motor mounted on the rear wheels and a 48 volt electric system. The motor itself makes a modest 2 bhp. But before you laugh and point at that figure, the same motor also makes 100 Nm of peak torque. To put things into perspective, the Maruti Suzuki Alto 800, one of the best selling cars in the country makes 69 Nm from its 800cc three cylinder engine. The Genze used to have a 30 mile (48 km) range which has now been upped to about 35 miles (56 km) and it has a top speed (in the United States) of about 30 kmph (48 kmph). And it does that sprint in a quick under 10 seconds too making it quite sprightly off the line - especially in traffic or start stop conditions. 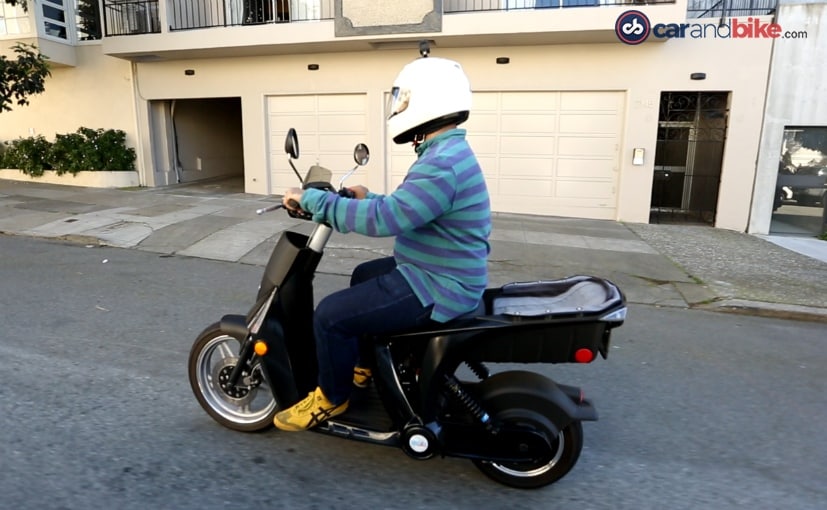 The reason the top speed is locked to a comparatively pedestrian 30 mph is also because of the fact that the U.S. regulations for mopeds have a speed restriction (just like the one on the number of people it can sit). Now while you might think a 30 mph or 48 kmph speed limit isn't fast enough to have fun on, the Genze is the kind of vehicle that redefines the word fun. Sure, the roads around San Francisco - especially that steep hill leading up to the famous twisty Lombard Street reduced my speed down to a pedestrian 5 mph and even stopped the scooter dead in its tracks for a few seconds, the moment you hit level ground, the zippiness of the Genze takes over leaving most other vehicles in its wake. 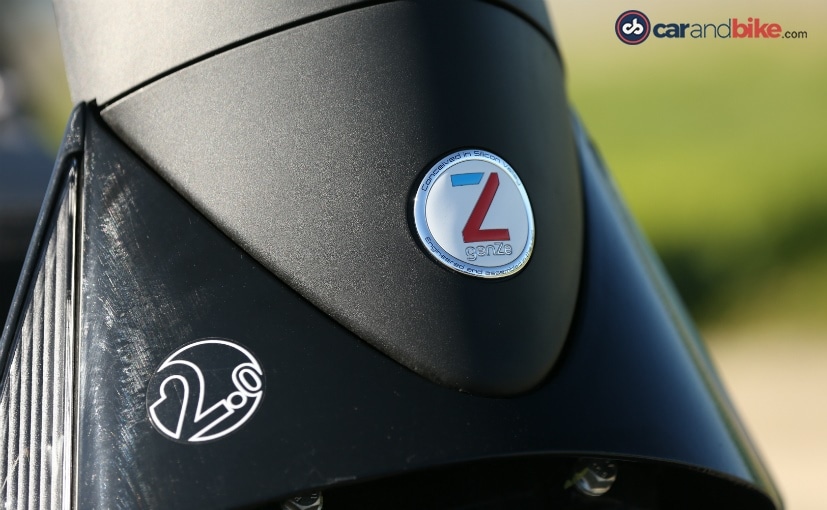 It is nimble, agile and even with its overall kerb weight which is over 100 kg, it feels fun to ride! The ride could most certainly do with a bit more comfort based setting but then the roads in San Francisco are shockingly about as good or as bad as the ones you get in Mumbai or Delhi. The Genze, as we mentioned earlier, also has riding modes. The easy mode is ideal when you want to stretch that range out to its maximum but the enthusiast (like me) will prefer keeping it in the Sport mode at all times. And the difference between the two is oh-so-obvious. And to top it all off, the Genze also comes with a reverse option. So unlike pushing your normal scooter with your legs trying to reverse out of a parking spot, you can just push the switch to reverse, twist the throttle, and get going! 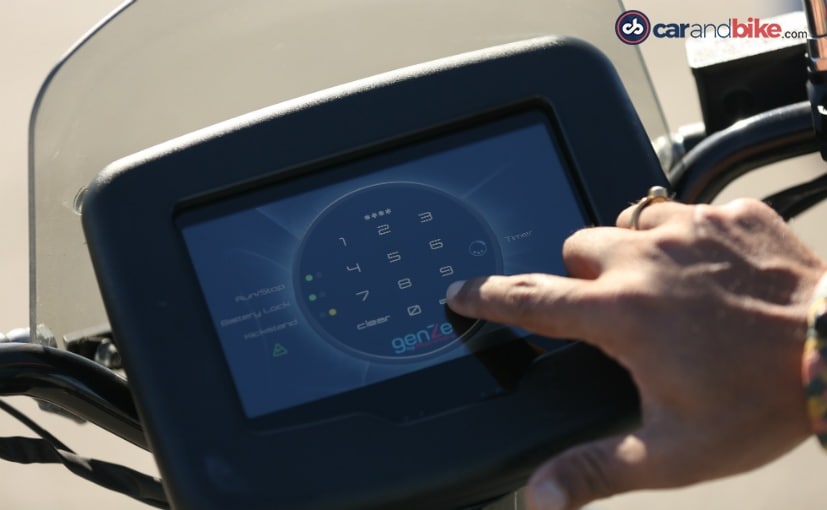 The Genze also gets disc brakes both up front and in the rear. And that brings me to my favourite part of the scooter - the attention to detail. While there might be a great many things to a great many people that attract them to a product, it is that one singular detail that I always look for in a vehicle that helps endear it to me. And for the Genze, it is the front disc brake with the cutout 'Z' logo akin to the Z in the Genze badging. Now although it might actually be mechanically very slightly flawed with wear patterns, I personally think it is an absolutely beautiful and thoughtful piece of design that needs to be lauded. 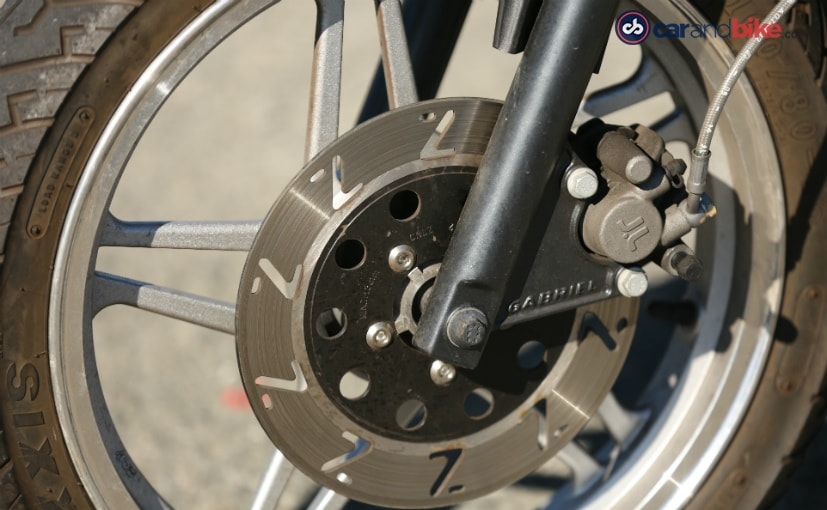 Now, the Genze is available to the average individual owner and customer but the main bulk of the electric scooter sales are actually to fleet operators. Now this includes customers like Scoot who give it out to people as rentals to ride around San Francisco or to delivery outlets to deliver small goods or food, etc. And that brings us to that loading area at the back. The Genze is actually available with upto ten different options for the loading area - from a cloth top zipper to a hard plastic case, a variety of racks and even an empty non-covered space. And that is what gives it versatility. And it also comes with a centre stand that is electronically locked and can only be unlocked when you punch in the code making it difficult to steal. And if one does manage to steal it, every Genze scooter gets GPS tracking. 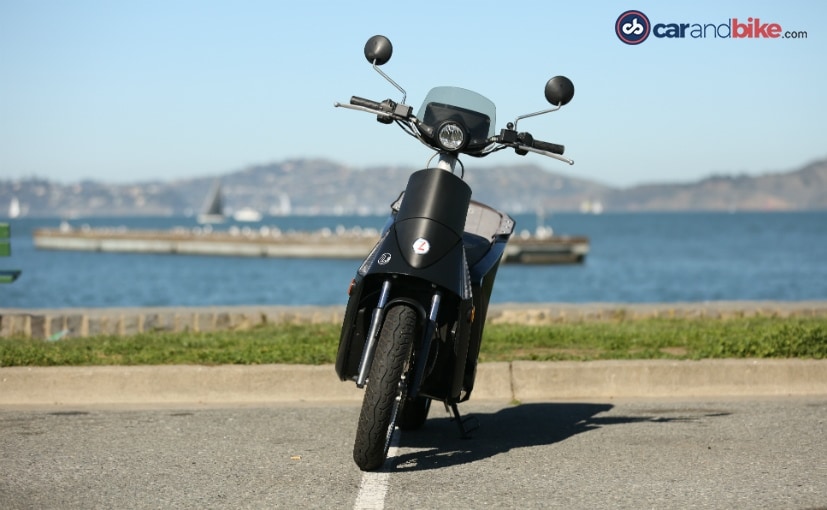 So what about the battery and charge cycles you ask. Well, that is taken care of by either plugging the Genze into the wall socket with a cable or alternatively you can actually remove the whole battery pack from the scooter and carry it to your home or office when you can charge it up. A full charge takes just under four hours. Sadly though, there is no quick charge capability on the Genze scooter just yet although that is something that the manufacturer is working to as an option in the future. 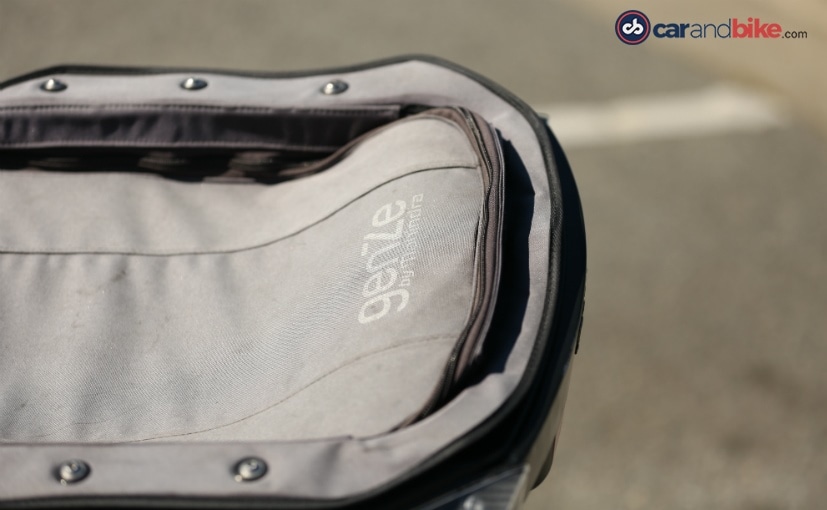 So to wrap is up, when compared to scooters available in India, the Genze's $3000 or about Rs 2.1 lakh price point might look steep but then traditional scooters are even more expensive in the United States - so that does equate to a sensible price point. As a tool to run errands or commute, the Genze is nearly perfect for someone who needs to go get their weekly vegetables, fruits and that all important loaf of bread. It is quirky when it comes to design, is packed to the brim with tech and most importantly, you can take the battery off and take it home - which negates the need of a charging point. As a tool where all you need is practical mobility, it is almost perfect. And the fact that it is a zero emissions vehicle is a bonus.