Hyundai Grand i10 vs Tata Bolt: Theory of Evolution 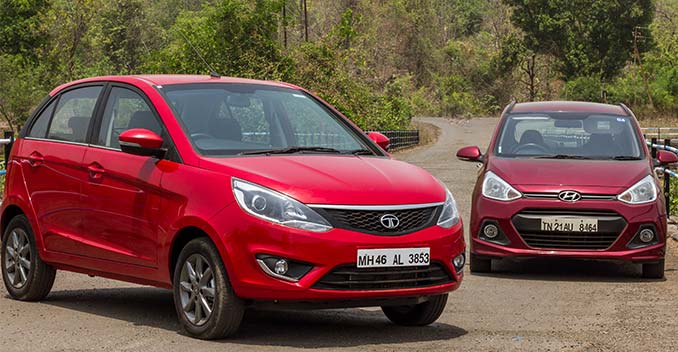 Though Darwin's theory of evolution faced criticism, much like every theory, there is no denying that his proposition was intriguing, to say the least. The riveting theory also gave the world a fitting mantra for life - survival of the fittest. Adapt to survive - though it came to be via science, its relevance in today's daily existence cannot be disputed.

To put things into perspective: car manufacturers employed this strategy to survive the intense competition they face in the market - at least most of them do. They make a conscious effort to adapt to the changing consumer behaviour. Case in point, the growing popularity of the sub-4 metre sedan segment.

Another appropriate example would be Hyundai - the Korean carmaker had a great product in the i10. However, when its consumers asked for a bigger car, they took a successful product, redesigned it, added new features and gave the market the Grand i10. A similar situation was unfolding at the Tata Motors headquarters too, only it was more of a revolution than evolution.

In 1998, Tata brought out the Indica, which was then followed by several iterations of the car over a decade-and-a-half. One after the other, Indicas rolled off the assembly line till the consumer said that they needed a change. This lead to the birth of HorizonNext, and consequently, evolution of the Indica. Put all of that together, and you have what is now the Bolt. We try to figure out how these two examples of evolution fare when pitted against each other.

When Hyundai brought out the Grand i10, they were looking at a car to fill the gap between the i10 and the i20. It is just the right length (3765mm) - only 20mm smaller than the i20 - and benefits from the Fluidic design language too, which translates into good looks. The Bolt, on the other hand, is a tad bigger at 3995mm, and though the people at Tata Motors say it is an all-new car, we don't quite agree, for it resembles the Vista a fair bit.

The new kid on the block is still a 15-year old Indica, no matter how much mascara or any other beauty product has been slathered on it. What the Indica, sorry, Bolt has to its name is the space on offer; with a wheelbase of 2470mm as against the Grand i10's 2425mm, the Bolt is, and feels, more spacious.

Inside, the Bolt greets you to a completely new look, which is a big move from what we saw in the Vista. Hallelujah! The plastic quality has improved and it gets a lot more features too. I drove the XT variant, and the equipment on this one included a touch-screen media player with Android smartphone enabled navigation to boot. Other features like Bluetooth, Aux-In, and USB are also part of the inventory.

However, where the Bolt suffers the absence of a CD player, it makes up with an SD card slot. As far as the Grand i10 is concerned, it a CD player gets along with the rest of the aforementioned features. Also, the Bolt scores extra points for first-in-class features like climate control - a feature that is not to be found in the Grand i10.

Its handful of firsts apart, things under the bonnet have not changed for the Bolt - it still comes powered by the same 1.3-litre Fiat-sourced Quadrajet diesel engine that develops the same 75bhp. With that being said, the big difference is, that like the Zest, the new hatchback also ditches the hydraulic power steering for an electrically assisted one from ZF. So the steering effort is eased, and the traffic seems a little less unnerving.

The Grand i10, on the other hand, sports the second generation of the 1.1-litre CRDi engine, which offers 70bhp. Even though it might feel a bit underpowered, it is pretty sufficient for a car this size. It feels nimble and the steering response is pretty good too.

The NVH levels on both the cars are also very well sorted, though there is a bit of tyre and engine noise that creeps inside the Bolt. Revv it past 3000rpm and you'll know what I am talking about. Thankfully, the Grand i10 doesn't struggle with any of that drama. Moving on to safety features, the Bolt XT variant gets ABS with EBD and driver and co-passenger airbags, which are offered as an option with the Grand i10.

Now, about the price of the two cars: while the Bolt XT is priced at ₹ 7 lakh, the Grand i10 Asta costs ₹ 6.35 lakh (prices are ex-showroom, Delhi). So that is a difference of 65 grands, but it also gets you extra space, more power, and top-of-the-line features. But is it all worth it?

Well, if space and safety features is what you are looking for - then the Bolt fits the bill. Otherwise, it's the Grand i10, despite the fact that it is a year older than the Bolt. The Grand i10 is small, sensible, and a practical city car; it is also the more evolved of the two, unlike the Bolt, which manages to evoke nothing more than a sense of Deja vu.