The Lamborghini Huracan Evo was launched in India a few months ago and now we finally spent some time with newest avatar of the Huracan at the Chennai racetrack. It is mental! Downright mental! I can literally imagine the grin on my face as I follow a yellow Lamborghini Urus, taking the right on C1 through to C3 at MMRT. The Urus, being driven by Armaan Ebrahim, one of India's best racecar drivers, carried scary pace and I too was determined to not lose sight of it! As I mash the throttle, I am violently pushed back into the seat and it is almost as if the world around me slows down as if I am in a time warp of sorts! But, I am brought back to reality as the next set of corners arrives and I come out of my thought bubble, thinking I am the next Lewis Hamilton. Not my fault, it is just that the Lamborghini Huracan Evo is so intuitive and so agile that even a noob can hustle it around corners and come out feeling like a track hero! 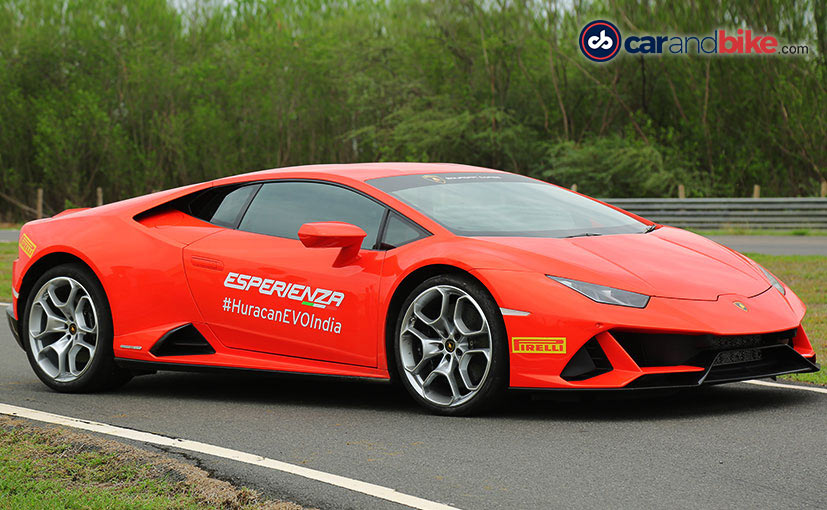 What all is new?

It is basically a mid-life facelift for the Huracan. The Evo gets a few new design updates such as new bumpers at both ends along with new and larger ducts up front and a slightly re-worked spoiler at the rear. The round exhaust pipes have been moved above the rear bumper, in order to create more space for a bigger diffuser and a more aerodynamic underbody. In a gist, the Huracan Evo looks even more sinister than the Huracan! 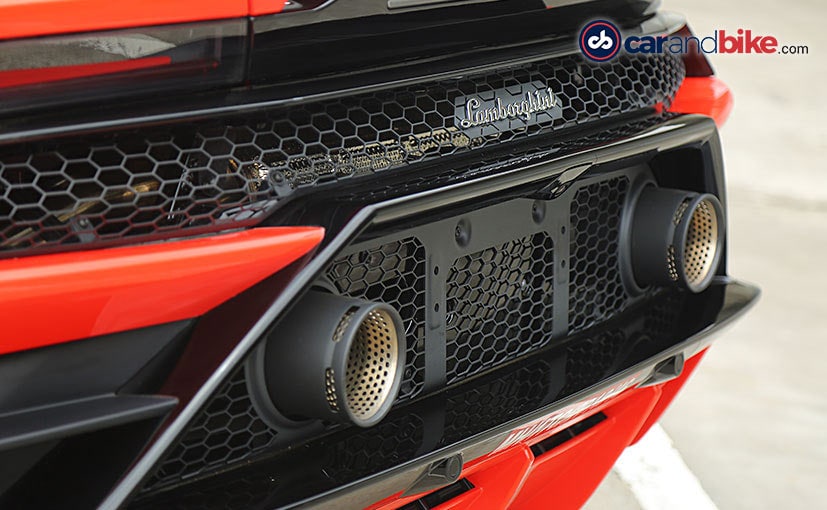 The interior gets an update as well with a new 8.4-inch touchscreen infotainment system at the centre which gets Apple CarPlay, gesture control and the very interesting Lamborghini Dinamica Veicolo Integrata or LDVI, which is the brain of the Huracan Evo! But more on that later! The car gets three driving modes, which can be selected by a toggle switch on the bottom of the steering wheel. The three modes are Strada, Sport and Corsa. The Strada is basically the mode that you choose when you are pottering about in town. The Sport is for when you hit the racetrack and the Corsa is basically, when you want to pull out all stops and get the very best out of the Huracan Evo.

How about the specifications? 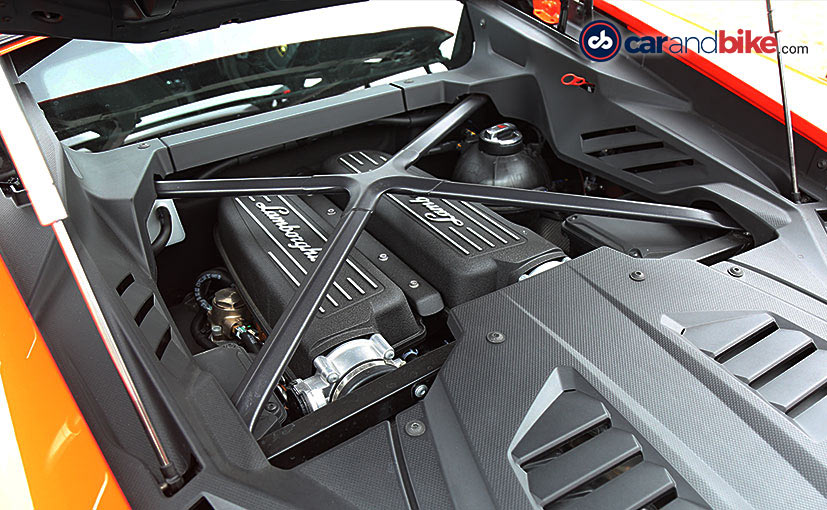 Lamborghini still believes in the glory of naturally aspirated engines! There is this distinct sense of urgency in big naturally aspirated engines and the one on the Huracan Evo is no different! It is a 5.2-litre V10 unit, which is one of the most successful Lambo engines of the modern times. The engine doles out about 631 bhp at 8,000 rpm, which is about 30 bhp more than the Huracan. The peak torque output is rated at 600 Nm at 6,500 rpm. The output is the same as that on the Huracan Performante! The 0-100 kmph sprint comes in at 2.9 seconds and the Evo can touch a maximum of 325 kmph! There is a 7-speed dual-clutch transmission that sends power to all wheels via a fifth generation Haldex AWD system.

What is the Lamborghini Dinamica Veicolo Integrata system? 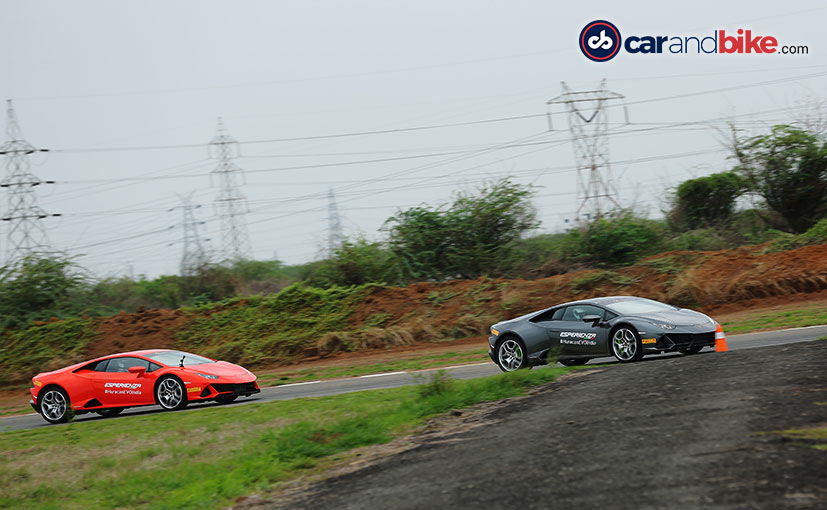 (The Huracan Evo is not only fast, but intelligent too! Thanks to the LDVI system)

It is basically a bunch of driver assistance systems coming together to make your drive experience smoother and dare I say, faster! The LDVI system controls the vehicle dynamics such as output, braking, throttle and so on. The Huracan Evo is a full-blooded supercar and the idea is to use LDVI and make the car easier to drive for people who aren't used to that kind of performance. People like me! The LDVI system makes you feel like you are the next Lewis Hamilton, behind the wheel.

Is it a raging bull? 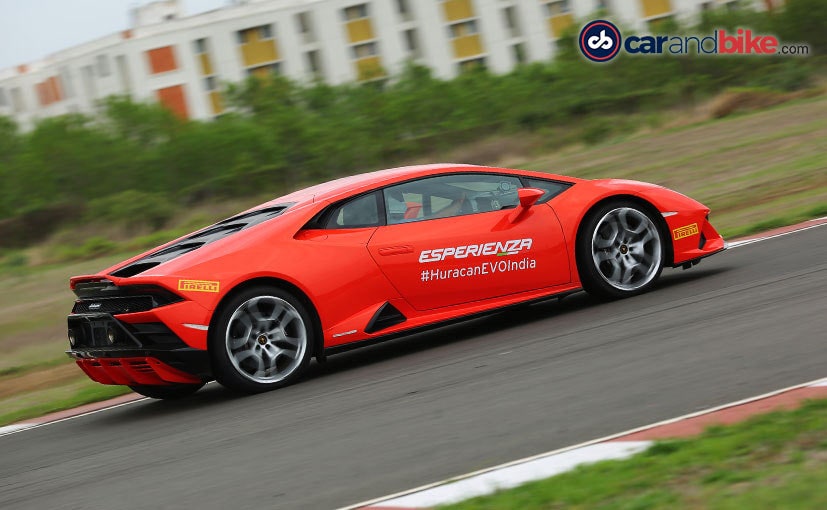 (The way it responds to throttle inputs is beyond belief, but then it is a Lambo and we are only mere mortals)

Absolutely! It is a true blue Lambo! I selected the Sport mode and set off behind the yellow Urus. With C3 approaching, I rapidly downshifted twice, hit the brakes and as I exit, I mashed the throttle and the engine broke into a song. Inside the cabin, the roar of the 5.2-litre V10 feels guttural but when you are outside, it doesn't quite hit the right notes with your ears. There is this synthetic feeling when you give it the beans but the raw, carnal howl that you expect out of a big, naturally aspirated engine isn't quite there! 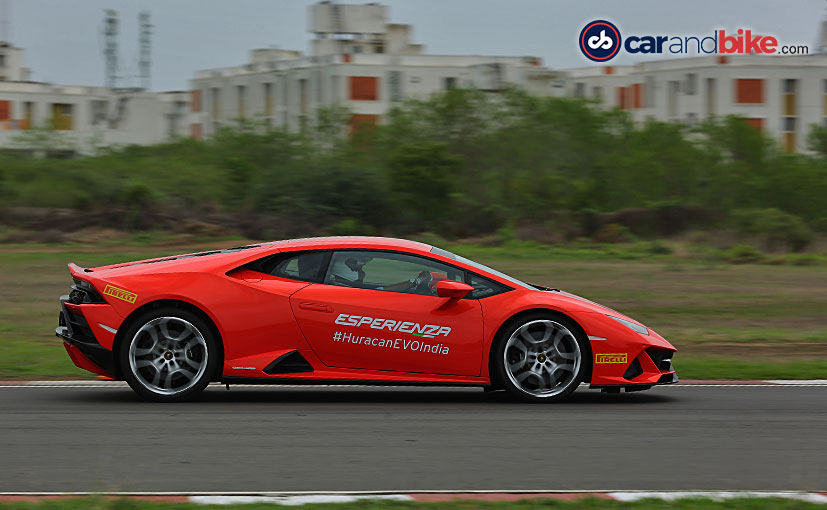 Hammering the accelerator down, I half-expected the rear to step out and dance, requiring me to hit the steering in the other direction, but the LDVI system reins in the extra throttle, keeps the car from going into a spin and with the help of torque vectoring, makes the car stick to the line I chose! A little more throttle and the rear will slide out, but it is hardly unnerving, in fact, it is more towards the enjoyable! It is a crying shame that we barely got six laps with the car out of which four were fast laps and two were cool-down laps. We could have easily done with 50 more! 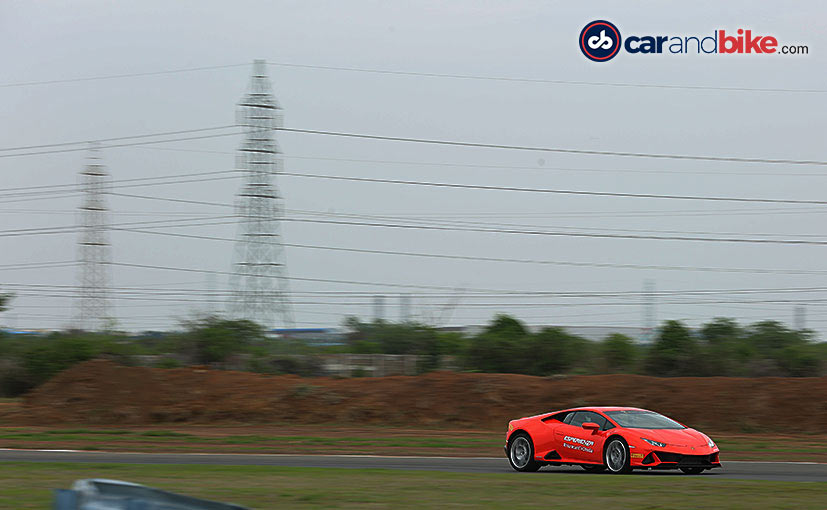 (It is scarily fast, the Huracan Evo! Yes, it is a Lambo, but still, you won't expect the staggering feocity with which the car moves ahead)

The rigidity of the chassis, the precise power delivery and the well-weighted steering wheel come together to offer sheer driving delight! The way the car responds to handling inputs will just spoil you for life. It is super-precise and telepathic. It is almost as if the car reads your thoughts and points itself in the right direction. The balance is beautiful and the car's stability through corners is rock solid! 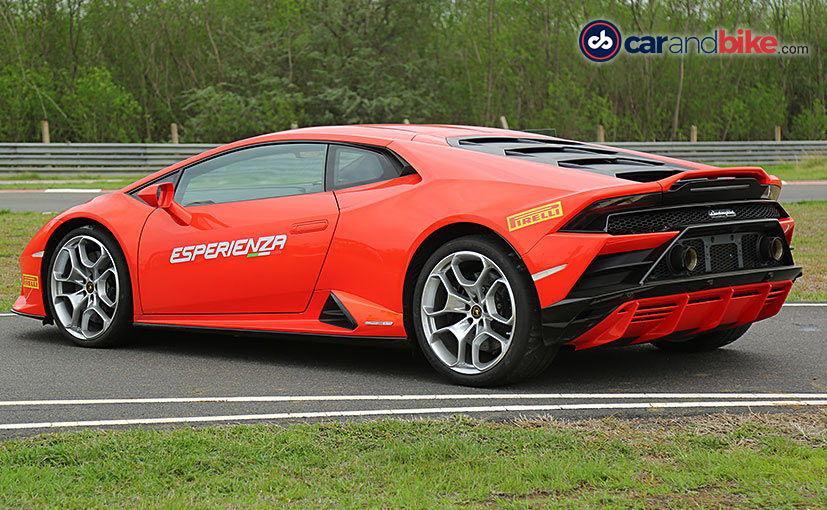 (At ₹ 3.73 crore, it is going to be an exclusive sighting on our roads. Oh! But what a sighting it would be)

At a price of ₹ 3.73 crore, there are a fair few options such as the Ferrari 488 GTB and the Audi R8 V10 Plus in our country! However, the Lamborghini Huracan Evo tugs at the strings of your heart with its performance, balance and the sheer electronics wizardry of the LDVI system. The car's response is razor sharp and it definitely makes you feel like a track day hero! If you have pockets deep enough and have a taste for cars that give you goosebumps by simply looking at them, then the Huracan Evo should definitely be in your garage!