The Ducati Monster gets a massive update for 2021 which includes a new engine and a new design along with updated features. We tell you about the updates and list the highlights of new Monster in town. 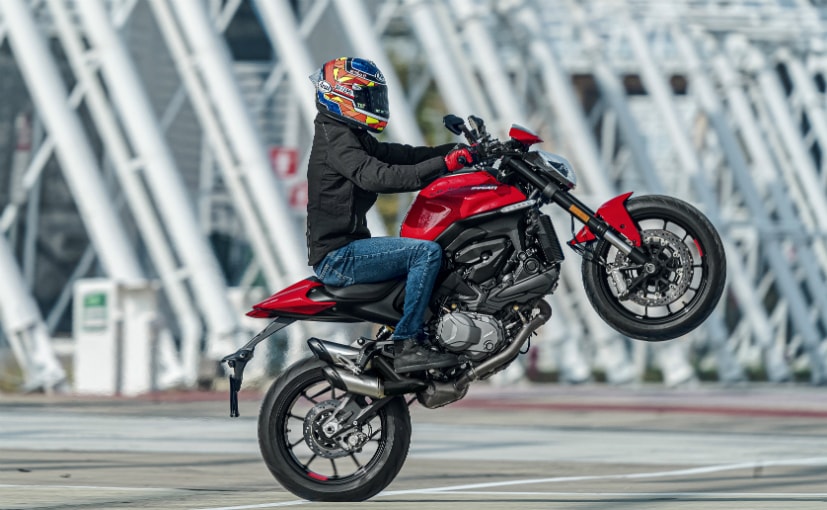 Ducati recently took the wraps off the new Monster for 2021. The new naked roadster from Ducati gets significant updates in terms of styling, performance and features. As was the case earlier, Ducati has not put a suffix after the monster denoting the displacement of the motorcycle. Ducati is likely to streamline the Monster portfolio from three bikes which were the Monster 797, Monster 821 and the Monster 1200 to just the Monster, which gets a new engine. So, here's a quick lowdown on the new Monster in town, from Ducati. 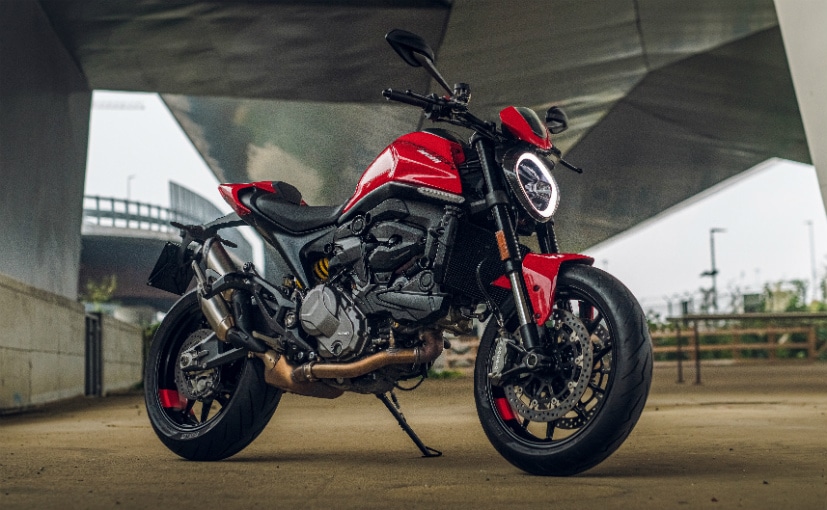 (The 2021 Ducati Monster gets fully updated styling, which is a complete departure from the motorcycle's previous design language)

The styling on the new Monster is a complete departure from the design language of the earlier Monster range. The motorcycle gets a lot more edges now and become leaner and meaner. The chiselled fuel tank and the new LED headlight and the overall look of the bike resemble that of an MV Agusta naked. View the profile photos and you realise that the new Monster has ditched the exposed Trellis frame, which was an integral part of the earlier look, but more on that later. The rear section rises sharply and culminates into smart looking taillight and the upward swept slash-cut dual exhausts round off the edgy, new-gen look of the Monster. Few enthusiasts may say that the Monster has lost its soul and identity but the new model is a handsome motorcycle and continues to have a dominating, aggressive stance. Plus, the handlebar on the bike moves 70 mm closer to the rider and the footpegs are positioned 10 mm lower than before.This means that the seating geometry is likely to be more comfortable than before. 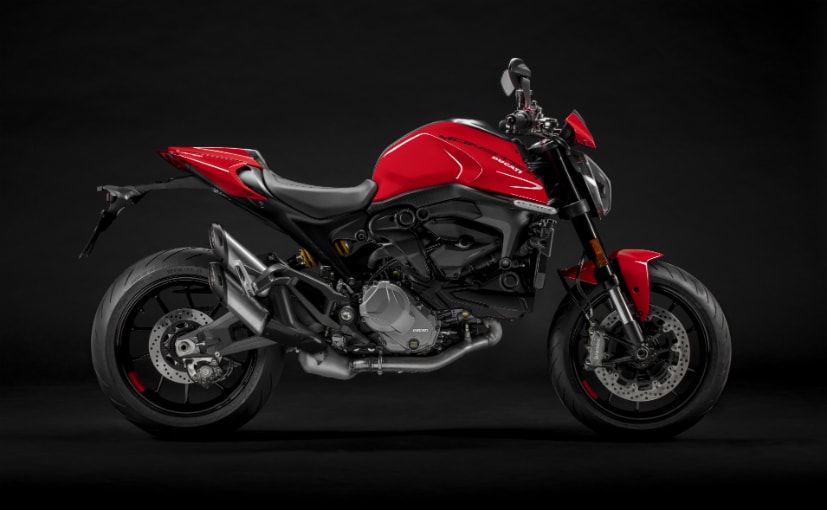 (The new Monster from Ducati gets an all-new Aluminium frame, inspired by the Panigale V4. The bike ditches the steel Trellis frame)

First off, like we said, the Monster ditches the trellis frame and gets an all-new Aluminium frame inspired by the Panigale V4. The bike is lighter than before, with a dry weight of 166 kg, which is a massive 18 kg lesser than that before. The sub-frame at the rear is made of glass fibre reinforced polymer (GFRP), making it lighter and stronger than before. The motorcycle gets 43 mm upside down forks with 130 mm travel and an adjustable monoshock at the rear with 140 mm travel. The bike also gets new 17-inch alloys which are lighter than before. They are shod with Pirelli Diablo Rosso III rubber, 120/70 up front and 180/55 at the rear. Up front it gets twin Brembo M4.32 4-piston monobloc callipers that grip two 320 mm discs. At the rear the bike gets a single 245 mm disc gripped by a Brembo calliper. Like the front brake, it features sintered brake pads. 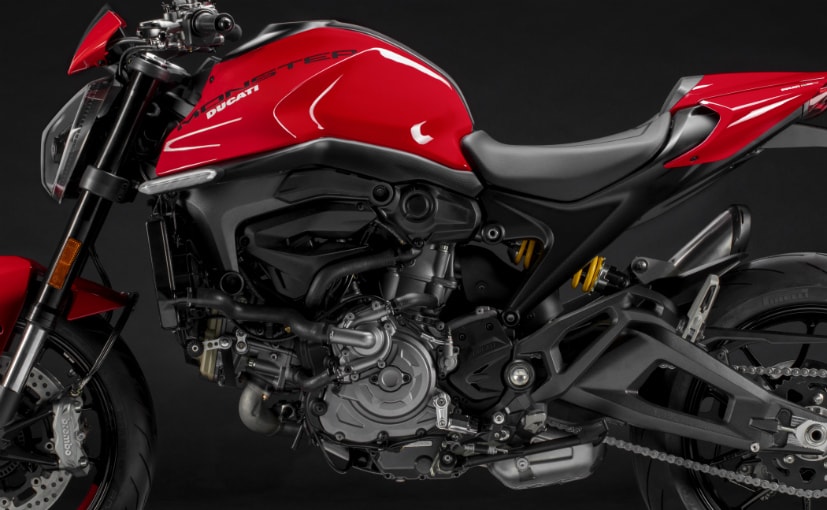 The 2021 Ducati Monster gets a 937 cc L-Twin Testastretta engine which is liquid-cooled. The engine is seen on other Ducati models too such as the Hypermotard and 2021 SuperSport. On the Monster, it is tuned to make 110 bhp at 9,250 rpm along with peak torque output of 93 Nm at 6,500 rpm. The engine is paired to a 6-speed gearbox and Ducati offers a bi-directional quick-shifter as standard. The power is 2 bhp up while the torque output goes up by 6 Nm, compared to the Monster 821. 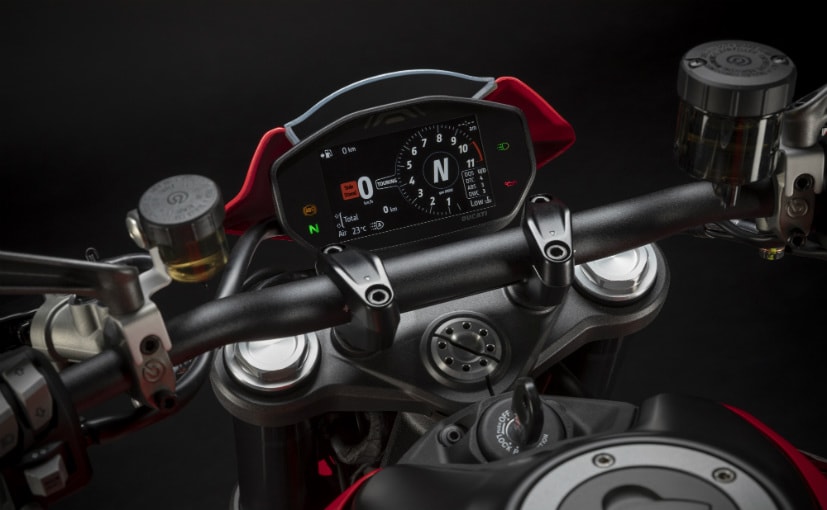 (The 2021 Monster also gets a 4.3-inch TFT console with graphics inspired by Panigale V4)

The new Monster gets ABS, cornering ABS, power launch, traction control and wheelie control along with ride-by-wire and three riding modes which are Sport, Touring and Urban. All modes allow the rider to adjust the other electronics as per their requirement. The new Ducati Monster also gets a new 4.3-inch full colour TFT instrument console with graphics inspired by the Panigale V4. Customers can opt for heated grips and Ducati Multimedia system on their bike. 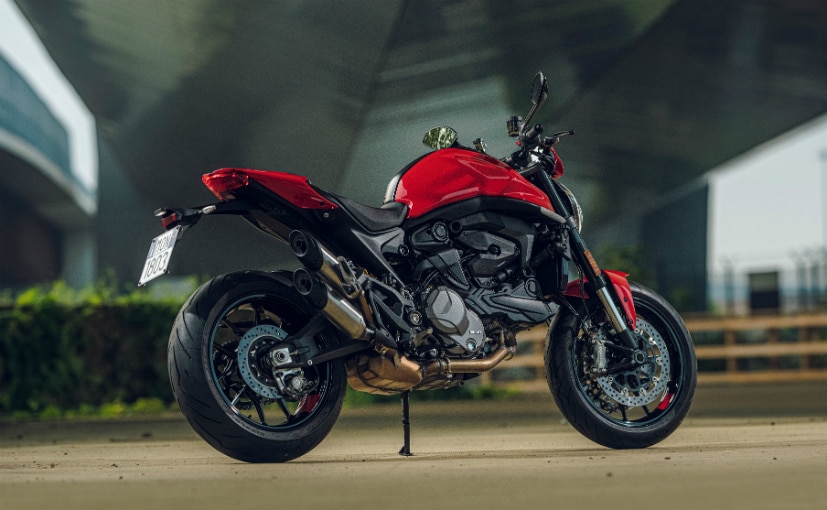 Ducati sold the Monster range in India and we expect the company to launch the new Monster in the country, possibly in the first half of 2021. The new Monster is likely to be priced between ₹ 11 lakh-12 lakh. The bike gets two variants, Monster and the Monster Plus. The latter gets a flyscreen atop the headlight and a cowl for the rear seat. Additionally, customers will be able to personalise their motorcycle, with a range of accessories on offer from Ducati Performance Catalogue. Once it is launched, it will go up against the Triumph Street Triple R and the Kawasaki Z900.