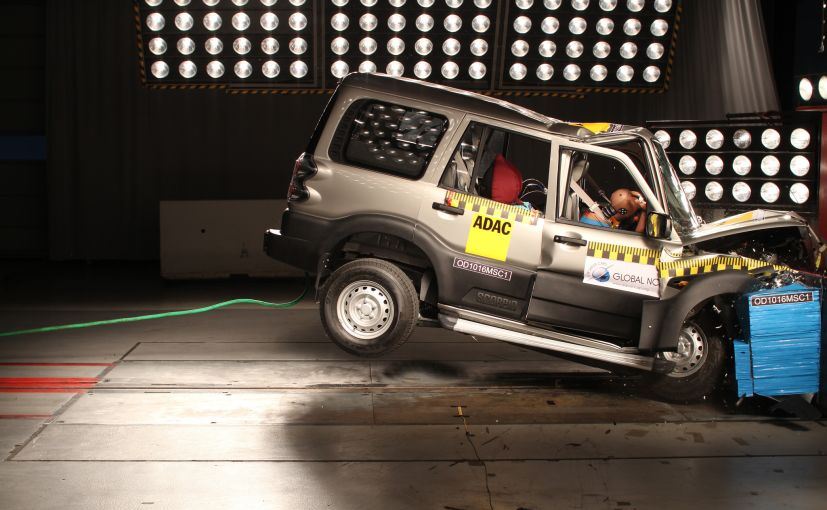 Made in India cars have failed crash tests. Again. In the third round of tests involving popular models sold in India, Global NCAP has crashed the Renault Kwid, Maruti Suzuki Celerio, Maruti Suzuki Eeco, Mahindra Scorpio and Hyundai Eon. All cars have received zero stars for safety in the tests.

The simple truth here is that to pass these tests vehicles must carry some basic safety equipment - dual airbags is a mandated requirement. The fact that none of these cars have airbags as standard, means that like in the previous tests, they failed even before they could be crashed. Of course the structural integrity of the car's body shell is also tested, and here too many performed poorly.

India is the world's sixth largest automobile market, and is projected to overtake South Korea and Germany and jump to the fourth spot by 2020. It is also a global manufacturing hub for several automakers. This is why Global NCAP has taken up the matter of safety regulation and appealed to the Indian government to take steps to institute a New Car Assessment Programme or NCAP, for India. Global NCAP's first India crash test was conducted almost 3 years ago with 5 models - Tata Nano, Maruti Suzuki Alto800, Ford Figo, Hyundai i10 and VW Polo. The next round in 2014 used two models - Datsun GO and Maruti Suzuki Swift.

Other markets like the US, EU, Latin America, Australia, China and even South East Asian countries have their own NCAP. India is the only major automobile market that does not.

The latest tests, conducted by Global NCAP, showed that in an accident, all the cars would leave the driver with possible life-threatening injuries to the occupants. All the cars scored two stars each for child safety, barring the Maruti Suzuki Celerio, which was able to score only one star.

David Ward, the secretary general of Global NCAP, said, "The latest 'Safer Cars For India' test results show how important it is for cars to have a body shell that can remain stable in a crash. This is an absolutely crucial pre-requisite for occupant safety together with fitment of at least front air bags. It is very surprising that a manufacturer like Renault introduced the Kwid initially lacking this essential feature. Global NCAP strongly believes that no manufacturer anywhere in the world should be developing new models that are so clearly sub-standard. Car makers must ensure that their new models pass the UN's minimum crash test regulations, and support use of an airbag."

Renault for its part has already said it will rework the Kwid to make it safer. It shares space with cars like the Maruti Suzuki Alto and now the Hyundai Eon that have also fared miserably in similar tests though. Reacting to the tests, Renault India has said, "Indian Government has announced that the crash test regulation for the existing cars will come into effect in 2019 and for the new cars in 2017. Renault is committed to comply with these timelines." Meanwhile, Maruti Suzuki has declined to comment, while we await statements from Hyundai. 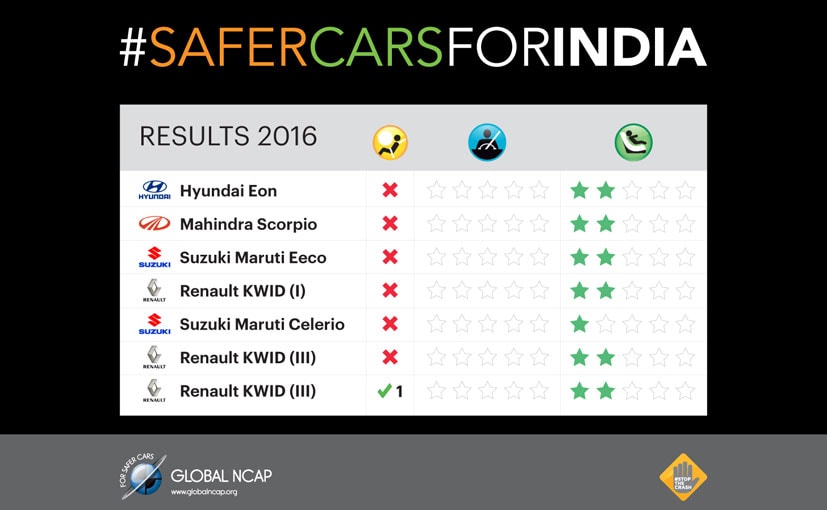 We must point out that the Mahindra Scorpio is the only exception in the pack - as it offers dual airbags as at least optional on every variant - including the base model. This is now true of the entire range f Mahindra vehicles, and was a decision Mahindra moved towards after the first round of crash tests 3 years ago. Mahindra and will be updating you on the same. Mahindra says, "Most variants of the Scorpio are equipped with airbags and a safety package. Approximately 75% of Scorpio customers choose the air bags variants of the vehicle."

It must be noted that the idea of having crash tests is primarily to increase awareness and allowing consumers to make the choice - until the government does impose basic safety norms by law. We do hope that we continue to see positive movement towards the larger goal of having safer vehicles, in a country that continues to hold the record for highest road deaths every year. The Global NCAP has welcomed the idea of a forthcoming launch of a Bharat New Car Assessment Programme, but this assessment - for front and side impact crash tests - will only be done from October 2017. In the meantime, the Global NCAP has appealed to carmakers to act immediately to eliminate all zero star cars from production as soon as possible.