Hyundai To Integrate Nvidia Drive Across All Its Cars

Drive is a suite of features which includes the underlying firmware integrating AI leveraging compute that is delivered by Nvidia's chipsets. View Photos
Drive is a full suite which integrates the cockpit, infotainment system and autonomous capabilities

Hyundai and Nvidia have announced that Nvidia's drive platform which is a software-defined A1 powered infotainment system will be ubiquitously integrated into all of Hyundai's vehicles. This will work across Hyundai group brands which include the parent Hyundai brand, Kia and Genesis. Cars with Nvidia Drive will go into production by 2022.

"By making high-performance, energy-efficient compute a standard feature, every vehicle will include a rich, software-defined AI user experience that's always at the cutting edge," the both reveal in a blog post.

Hyundai's partnership with Nvidia is not new. It has been working with Nvidia since 2015 developing the Drive system which was originally deployed on the Genesis GV80 and G80 models last year. They have also been working on an advanced digital cockpit for 2021. Drive will be integrated in all of Hyundai's vehicles starting 2022

"NVIDIA brought consumer electronic functionality and a graphics-rich user interface to infotainment systems more than a decade ago," said Ali Kani, vice president of autonomous vehicles at NVIDIA. "Now, we are once again transforming these systems through the power of AI - helping Hyundai Motor Group increase safety and value, along with enhancing customer satisfaction, throughout the lifetime of the vehicle," he added.

Drive is a suite of features which includes underlying firmware operating system integrating AI leveraging higher performance compute that is delivered by Nvidia's chipsets. Usually, the features of a car are compartmentalised - the infotainment system is powered by something else and the main autonomous capabilities are powered by a chip like Nvidia's Xavier. In fact, even an infotainment system can need multiple components which include switches for the radio etc - all of this is now coupled together on a smart platform. This will also include driver monitoring capabilities which are going to be important for ADAS or fully autonomous vehicles. 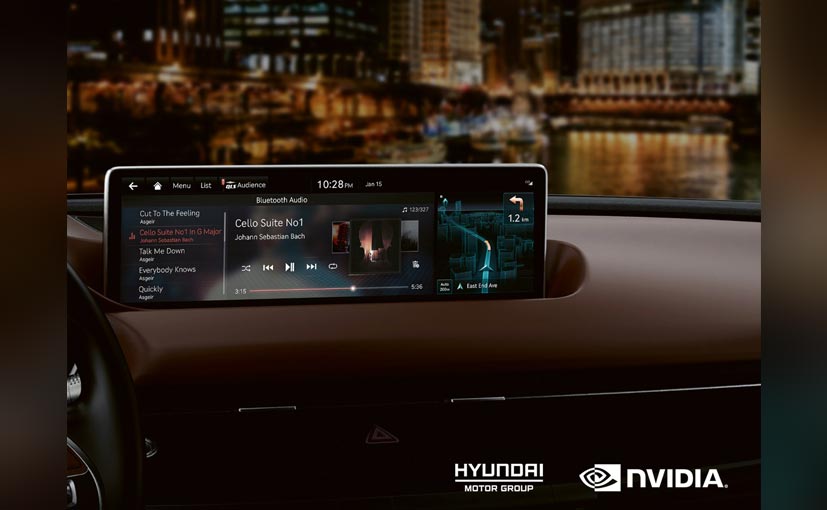 This smart infotainment system will combine AI and modularity

Now, what does this mean for tech like Apple CarPlay and Android Auto - likely these services which are considered core in-car infotainment elements will be integrated on top of Drive just like an app.

"At Hyundai Motor Group, we're committed to delivering greater value, safety, functionality and enjoyment over the lifetime of the car. The NVIDIA DRIVE platform is proven - it is scalable, energy-efficient and has the performance to support our next generation of software-defined vehicles," said Hyundai's Paul Choo who its senior vice president of the Electronics Tech Unit.