Mahindra Receives Over 15,000 Bookings For The New Thar Since Launch

Mahindra also said that the all-new Thar has received over 65,000 enquiries and more than 8 lakh website visitors.

View Photos
The new Mahindra Thar has received an overwhelming response from the Indian market.

The new generation Mahindra Thar SUV was launched in the country earlier this month with a starting price of ₹ 9.80 lakh (ex-showroom, India). In less than four days since launch, Mahindra received over 9,000 bookings for the all-new Thar in the country. And now, Mahindra reports that it has received over 15,000 bookings for the new Thar. The second-generation Thar made its India debut on the 74th Independence Day. The company started test drives for the SUV in a phased manner in 18 cities and now one can test drive the new Thar across the country. 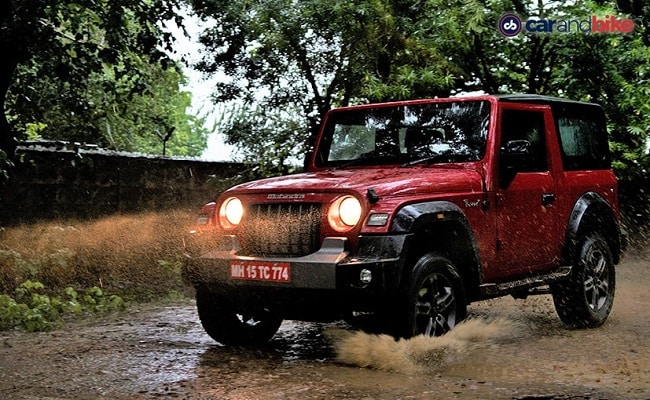 The Mahindra Thar 2020 is available in three trims - AX, AX optional and LX.

The company says that 57 per cent of all buyers of the Thar are first-time car buyers. Also, there is a significantly large number of bookings for the automatic variants. Moreover, Mahindra also said that the second-generation Thar has received over 65,000 enquiries and more than 8 lakh website visitors. The deliveries for the SUV will begin from November 1, 2020.

The new Thar 2020 is built on a new body-on-frame platform making it significantly bigger than its predecessor. Mechanically, the SUV is available with a choice of petrol and diesel engines. While the petrol mill is a 2.0-litre mStallion 150 TGDI unit, the diesel engine is a 2.2-litre mHawk 130 engine. The former makes 150 bhp and 320 Nm of peak torque between 1,500-3,000 rpm while the latter makes 130 bhp and 300 Nm of peak torque. Both engines are paired with a six-speed manual transmission as standard while a six-speed torque converter automatic is also on offer.

Commenting on the booking milestone, Veejay Nakra, Chief Executive Officer, Automotive Division, Mahindra & Mahindra Ltd. said, "We are delighted with this overwhelming response received for the All-New Thar, having crossed 15,000 bookings as on date. What is particularly interesting is that there is an acceptance of the All-New Thar amongst a larger base of lifestyle seekers, beyond the traditional lovers of this iconic brand. Given this overwhelming response, we are substantially ramping up our capacity".