Mahindra also said that the all-new Thar has received over 36,000 enquiries and more than 3.3 lakh website visitors. 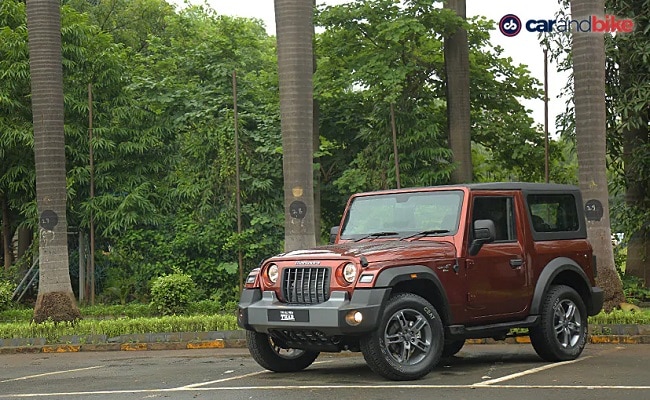 View Photos
The all-new Mahindra Thar has received an overwhelming response from the Indian market.

Mahindra launched the new-gen Thar on October 2, 2020 and now the company says that it has already received more than 9000 bookings for the SUV. The company had opened bookings of the car on October 2 in the second half of the day after the launch of the car. In fact, the demo vehicles were only available in 18 cities while the availability of them pan India will happen by October 15. Clearly, then, the bookings numbers shows how big the demand is for the new gen Thar considering it's been just 3 and a half days since bookings opened. The company also says that there is significant interest in the Convertible Top and Automatic Transmission top end variants.

Veejay Nakra, Chief Executive Officer, Automotive Division, Mahindra & Mahindra Ltd. said, “We are extremely happy with the overwhelming response and excitement that the All-New Thar has created. What is also encouraging is that the All-New Thar has resonated well with lifestyle seekers, families & women buyers, thereby opening-up an entirely new set of customers for this iconic lifestyle 4X4 SUV. Despite test drives being available in just 18 cities to begin with, we have received over 9,000 bookings for the All-New Thar, since its launch, which is unprecedented for this segment. Our endeavour is to ensure that test drive vehicles are available in the rest of the country at the earliest, for more people to experience and book the All-New Thar.”

Mahindra also said that the all-new Thar has received over 36,000 enquiries and more than 3.3 lakh website visitors.

Royal Enfield Meteor 350 Teased Ahead Of Launch
1 hour ago

2021 Triumph Trident 660 Unveiled; Coming To India Next Year
1 hour ago

New-Gen Hyundai i20 Will Get A Sunroof
1 hour ago

New-Gen Hyundai i20 Will Get A Sunroof
22 hours ago