The long-awaited new-generation Mahindra Thar has finally arrived and we've had a short spin in the off-roader, more importantly, the all-new turbo petrol with the automatic gearbox combination that will open the SUV to a new customer base. Here are our first impressions on the new Thar. 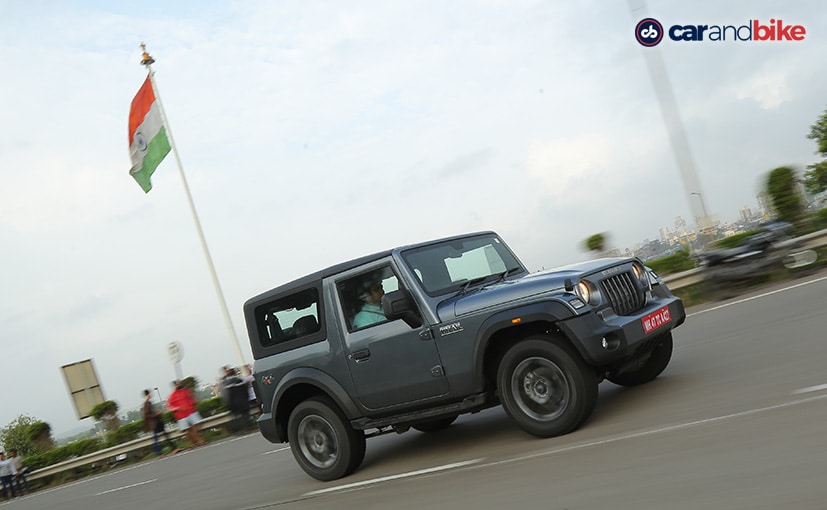 View Photos
The new Mahindra Thar is expected to be priced between Rs. 9.5 lakh and Rs. 13.5 lakh (ex-showroom)

We've been waiting for Mahindra to give us a glimpse of the Thar for years now and we had to wait 10 years for a new generation to come to us. The Mahindra Thar has had a cult following and the reason for this long wait was clearly to get things right on the very first go (this time around) The off-roader is finally here and it's come at a time when the world is reviving from the worst pandemic mankind has seen and maybe the buzz around the product would have been more had it been a different time but well, it's finally here and that's all that matters now. 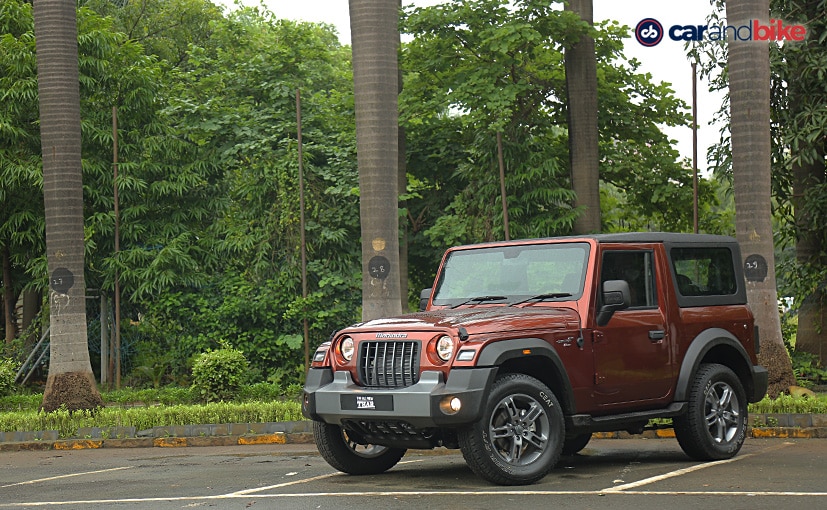 The Mahindra Thar gets a petrol engine for the first time since the CJ3B. The automatic is a first-ever for the off-roader

This time around, it's big on technology, big on appeal and yes a big change in the form of a petrol engine offering needs a mention too. It is for the first time since the original CJ3B that there's a petrol engine on offer and don't forget, there's an automatic transmission available too. So having witnessed the unveil, it was time to get behind the wheel of the new-generation Mahindra Thar to understand how far the off-roader has come. Now we have to say here that we didn't get too much time with the car, so these are just the first impressions and we wait to drive it a little more so that we can bring you a more comprehensive review that you'll get to read. So let's get going. 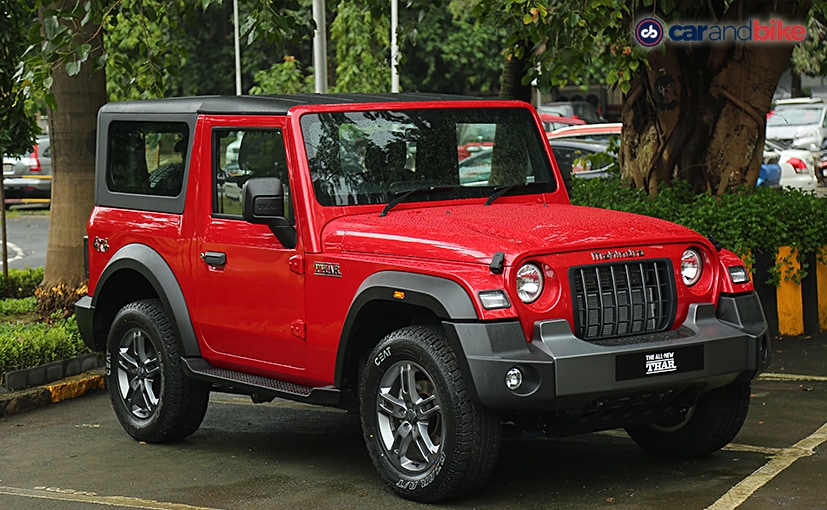 It's attractive and it's just so good to look at now. It's more upmarket and the changes point to one direction; lifestyle. And Mahindra wants to build onto that very word when it comes to the Thar. The upright nose features circular headlamps and a seven slat grille. In terms of design it follows the same philosophy as some of the iconic offroaders like the Mercedes G Wagen, Ford Bronco, Land Rover Defender and even the Jeep Wrangler. The hood too gets some muscle on it and has been raised and the bumper and arches round off to make it ready for pedestrian protection. It looks wider than before and the plastic cladding gives it that lifestyle quotient. As with all modern cars, there are LED DRLs integrated in the front fender, while the fog lamps are integrated into the bumper and that adds to its signature look. 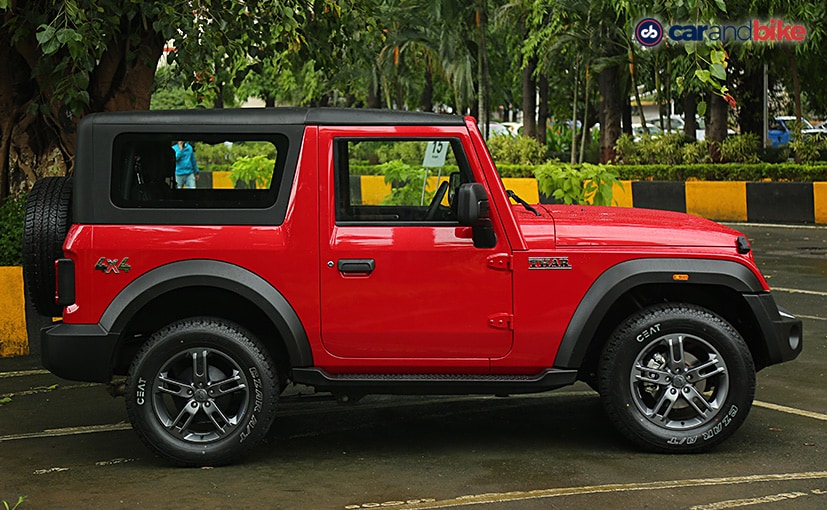 The profile sees a squared wheel arch upfront and a more circular one for the rear and that again gives it a good stance. There are a bunch of hexagonal design elements too which add to the sense of space and of course, make it look tougher and muscular.

At the rear, the stand-out element remains the new LED taillights with the Thar badge in the centre. The spare wheel too remains and it all looks very Thar-ish. The 18-inch wheels that we got on our car see it stand higher up from the ground. Mahindra, in fact, says that it gets a 226 mm ground clearance because of the 18-inchers and that again gives anyone driving the car the edge of being the tallest of the lot. The Thar towers over almost everything on the road and that's exactly why you'd love to drive it. 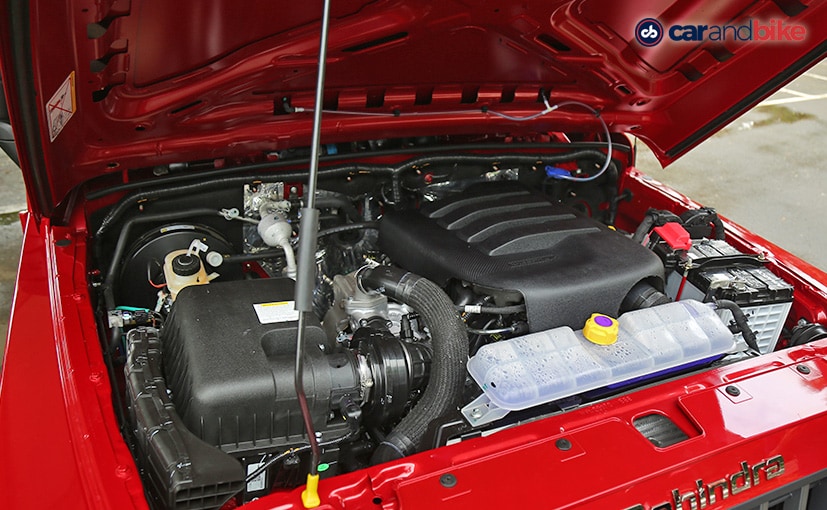 The Thar, we got to drive, was the petrol automatic. We've been itching to get our hands on the new family of mStallion turbocharged engines and this our first real taste of it. The one in the Thar certainly does not disappoint. It's the most powerful the Thar has got and with 150 bhp on offer, it's quite refined too. There's hardly any noise that seeps into the cabin and that just shows how far the Thar has come. With the 320 Nm of torque, it's more than even what the diesel has to offer. It's more alive once it pushes the 1700 rpm mark and yes there's a strong midrange which keeps pushing the car even as the revs build right up to 4800 rpm. You hit triple-digit marks quickly and there's no doubting the refinement of the engine. 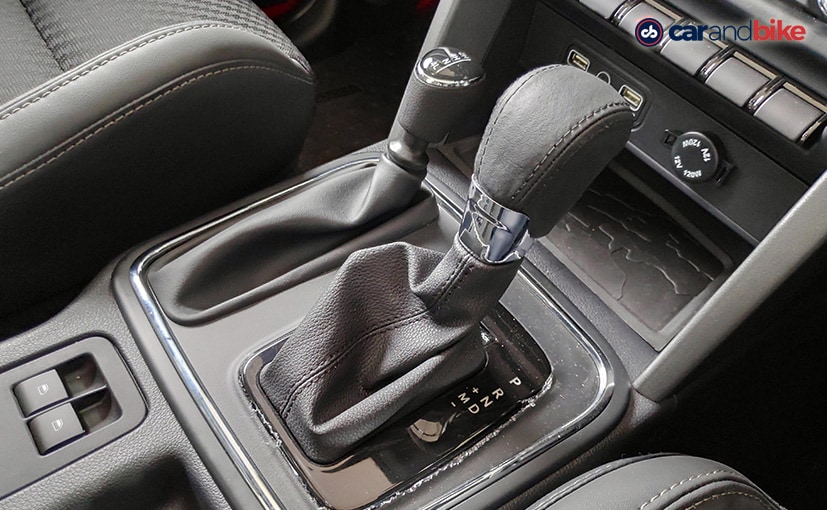 The new 6-speed torque converter adds to that driving experience. There's hardly any lag but you have to build up to 1700 rpm to really let the automatic transmission do its work. The gear changes are seamless and even if you engage the manual mode, it's enjoyable. However, the biggest and probably the most annoying part is the lack of a dead pedal; one that gets you a strong footing. It's not exactly reassuring because your left foot is too close to brake pedal and that sticks out like a sore thumb.

You'd then worry about how an automatic would go offroading. Well, there's a 4x4 available as well and a mechanical differential where you'll be able to engage 4L and 4H but sadly, we haven't tried that because of the paucity of time. 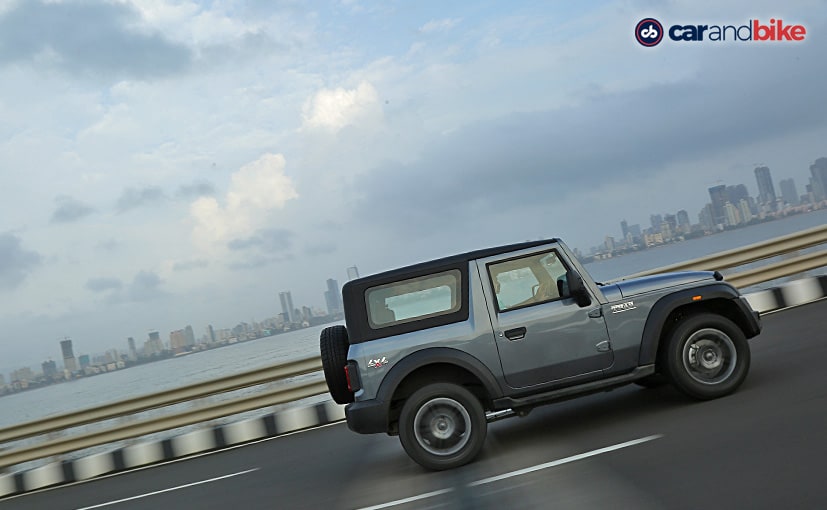 The Thar's suspension irons out most undulations and can take on the crater-sized potholes with ease. The ride does get a little jittery at lower speeds

The drive was a brief one as I said earlier and we were part of the convoy so speeding up or seeing how stable it is in corners was out of the question. But the rains had battered the Mumbai roads and we got to deal with some big potholes and some small ones too, some broken tarmac and heavy traffic too. None of this took its toll on the new generation of the Thar. It just glides through everything and the fact that you don't have to slow down for a big pothole while the others brake, gives the Thar its ‘devil may care' attitude.

The suspension setup is on the hard side and yes it gets a bit bouncy on the inside, especially at lower speeds and even as you build speed, that doesn't change. It'll probably be lesser on the 16-inchers but we wait to drive a Thar with one. The braking set-up comprises discs upfront and drum brakes at the rear across all variants and the feedback from the pedal seems adequate but the bite feels lacking. The SUV does nose-dive under heavy braking. 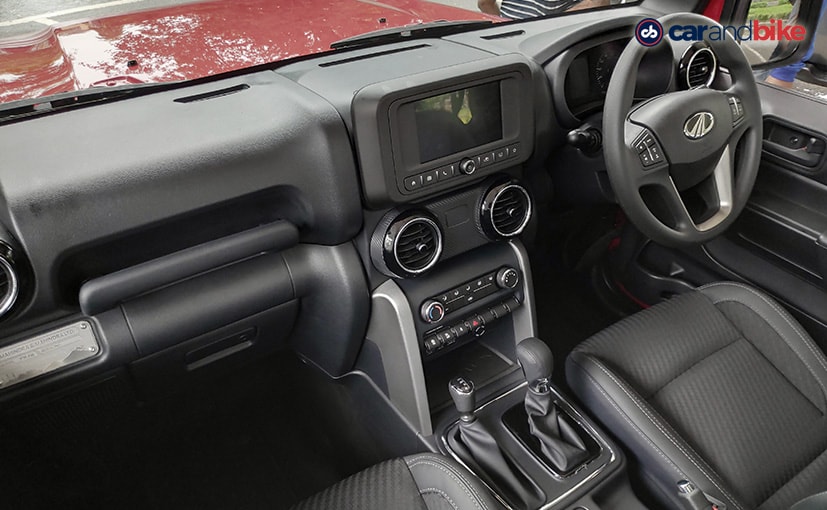 It's probably the plushest the Thar has ever got. Any number of modifications on any of the Thars done earlier do not come close to what this one has to offer. The seats are well-bolstered and in this one the LX trim, you get front-facing seats and so the Thar can seat 4 easily. However, the ingress is a little tight for rear-seat passengers, but overall, it's spot on. Mahindra says that the fabric upholstery is washable and so is the complete cabin with water-resistant buttons. So, yes you can go off-roading early in the morning, hose the car and the cabin and yourself down and then get back to the conference room, in time for a team meeting. We give a big thumbs up to that. 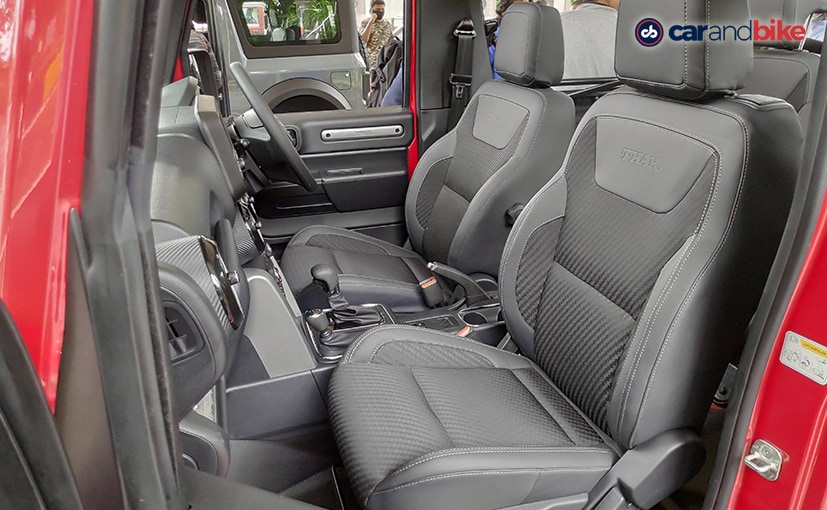 The front-facing seats will be limited to the LX Series, the adventure-ready AX Series will continue to get side facing seats

The Thar finally gets a 7-inch touchscreen infotainment system and it is quite intuitive and responds well to the finger-touch. There's Apple CarPlay as well and something what Mahindra calls adventure statistics which gives you details about wheel articulation, pitch and yaw. There cruise control, tyre pressure monitoring system (TPMS), hill descent, hill hold, ESP with rollover mitigation, ABS and dual airbags (which are standard) and more. 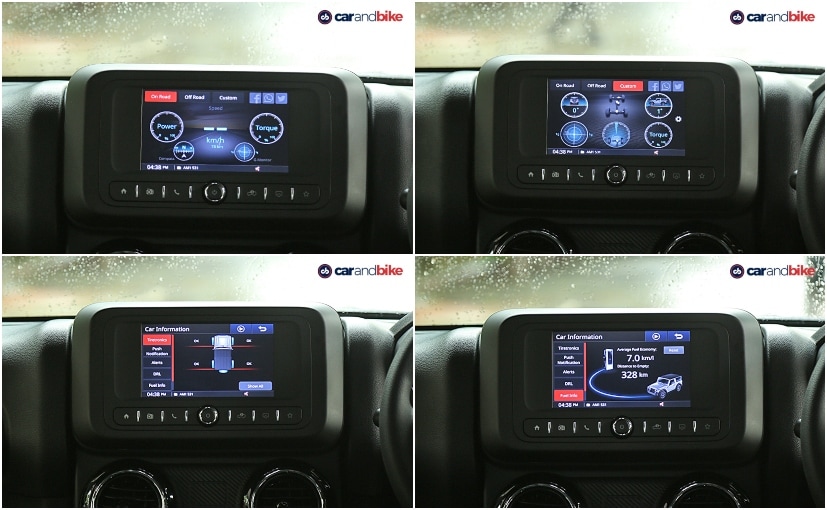 The Mahindra Thar's touchscreen system is feature-rich and packs in a host of information with Apple CarPlay, Android Auto and adventure statistics

So our short drive gave us an idea about what the Thar is like and frankly, we loved every bit of it. Its price will be key, though, and we can say it will be between ₹ 9.5 lakh going up to ₹ 13 lakh. So with sales starting from October 2, we are sure that there will be quite a few who will start saving to place a booking amount for the car; and all we would say is go ahead, why not? There will be an extensive review, of course, coming very soon and one where we will take it off-roading and do what it does best. But meanwhile, our first impressions give it a thumbs up, though we do feel, there's still room for improvement.