The first batch of Tata Tigor EVs was handed over to the AYUSH Ministry in Delhi, as part of Tata Motors' tender with the EESL. 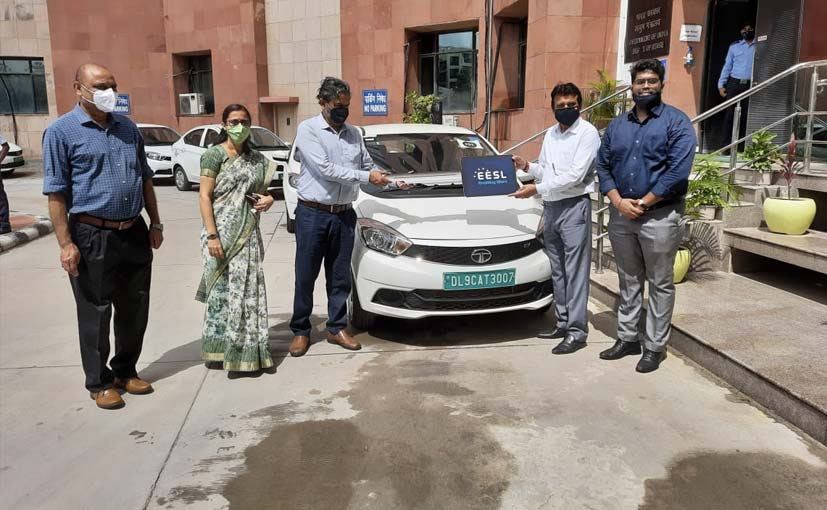 Tata Motors will be supplying the Tigor EV to the Ministry of Ayurveda, Yoga & Naturopathy, Unani, Siddha and Homoeopathy (AYUSH), as part of its tender with EESL. The company said that the first batch of the Tata Tigor EVs was handed over to the ministry in the presence of PN Ranjit Kumar, Joint Secretary (Admin), Ministry of AYUSH by Raj Kumar Luthra, General Manager at EESL. The electric cars are being inducted in the government fleet in a phased manner as part of the central government's vision to transition to only electric vehicles by 2030. Other government departments including the PMO have also inducted electric vehicles in their fleet, as part of the EESL tender.

The Tata Tigor EV was one of the first electric vehicles to come from the manufacturer and is currently offered only for fleet operations. The all-electric sedan uses a 21.5 kWh battery pack that powers the electric motor with 40 bhp and 105 Nm of peak torque on offer. The Tigor EV promises a range of 140 km and 213 km on a single charge, depending on the version. The automaker does not sell the Tigor EV to private buyers yet but has tied up with self-drive platforms like Zoomcar to provide the sedan on a rental basis. The Tata Tigor EVs pack a 21.5 kWh lithium-ion battery pack that powers the electric motor with 40 bhp and 105 Nm on offer

That said, Tata Motors is developing an updated version of the Tigor EV, bringing the model with the new Ziptron technology that debuted on the Nexon EV earlier this year. The facelifted model was spied recently wearing the redesigned front with sharper styling. The model could arrive sometime next year and potentially be sold to private buyers. Tata Motors says that the company's market share increased to 62 per cent in the first quarter of FY'21, in the electric vehicle segment.

For the EV space, the Tata Group has synergised its resources as Tata Motors works closely with Tata Power, Tata Chemicals, Tata Autocomp, Tata Motors Finance and Croma, to create an e-mobility ecosystem under the 'Tata Universe'.