Toyota Files Trademark For The BZ Series In India

The new bZ or Beyond Zero series signifies Toyota's new electric vehicle range, which will see seven new electric models by 2025. Now it has applied for eleven names to be trademarked in India, including the bZ4X.

View Photos
Toyota has applied for eleven names to be trademarked in India, including the recently showcased bZ4X

According to several listings on the Ministry of Commerce & Industry's Patents Design & Trademarks page, Toyota Motor Corporation has filed trademarks for an entire range of BZ model names in India. If you have been following Toyota's global announcements, you will know that the new bZ or Beyond Zero series signifies the company's new electric vehicle range, which will see seven new electric models by 2025. In fact, recently Toyota even unveiled a concept version of the Toyota bZ4X, which will be the first model in the bZ series. 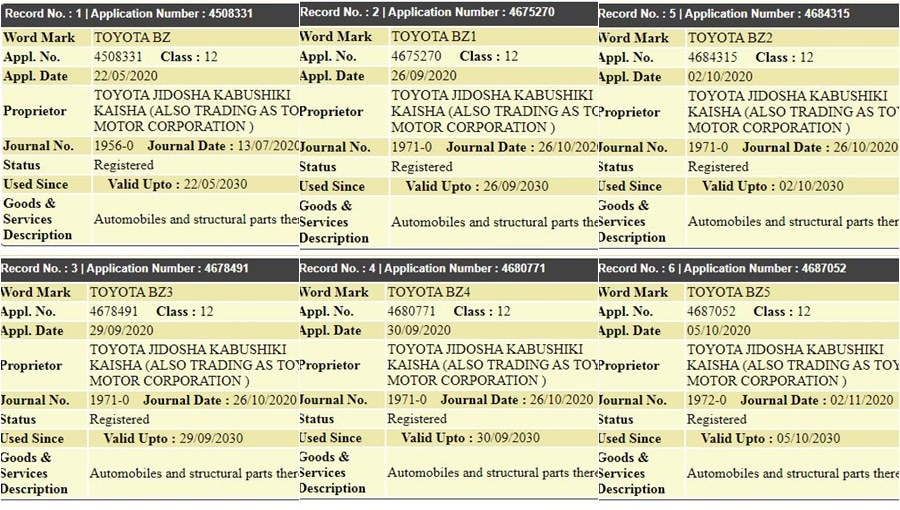 The Japanese carmaker has applied for eleven names to be trademarked in India - BZ, BZ1, BZ1X, BZ2, BZ2X, BZ3, BZ3X, BZ4, BZ4X, BZ5, and BZ5X. Details on the Patents Design & Trademarks website tell us that the trademarks were applied between May and October 2020 and they are valid until 2030. Now we have to tell you that just because a company files for a trademark does not mean it will launch that product in India, however, the fact that Toyota has registered these names alone means that it is considering bringing the new bZ series of electric vehicles to India.

Also Read: Toyota Belta Name Trademarked In India; Could This Be The Re-Badged Ciaz? 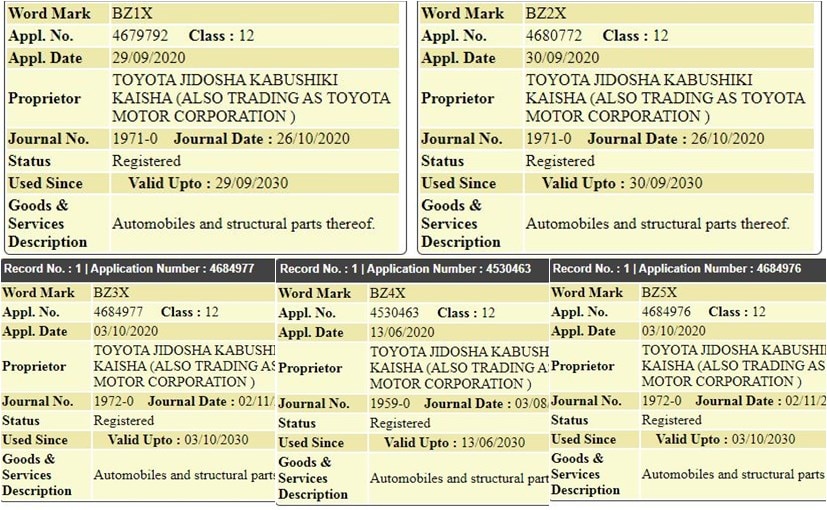 The company has also registered the X range of BZ series in India including the BZ4X, the concept car recently showcased by the company

The development of the Toyota bZ series is based on BEV-dedicated platforms that can be used with multiple variations in terms of size and design. The carmaker is taking help from other brands like BYD, Subaru, Suzuki and Daihatsu to jointly develop the series. In fact, the recently showcased Toyota bZ4X is a battery-electric vehicle developed in partnership with Subaru. Based on their jointly developed e-TNGA BEV-dedicated platform, the electric SUV takes advantage of Toyota's expertise in vehicle electrification, and Subaru's AWD technologies.