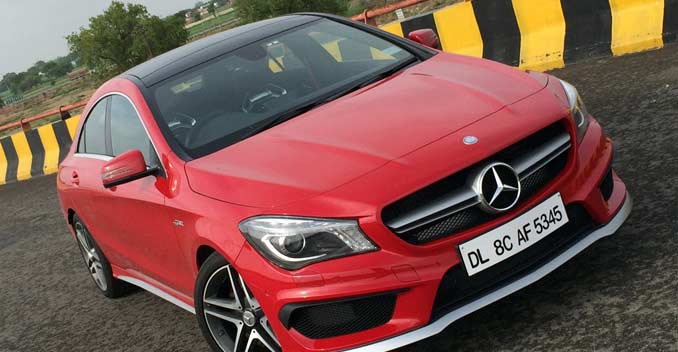 Yes, it seems a spate of AMG cars is arriving on our shores all of a sudden. Many of you have been thinking - these guys seem to be chasing only the luxury car pile these days! Well bear with us folks, because that's where the action seems to be concentrated off late. It is the year of the GL 63 and ML 63 AMG, the Audi RS7, the BMW M3/M4 and Porsche Macan. Now this little monster - the CLA 45 AMG.

After the success it has had with its compact offerings - the A Class and the B Class, Mercedes-Benz India is now teasing us with this car! The CLA 45 AMG is the souped-up avatar of the CLA sedan. The stock sedan won't get here for at least another 12 odd months, so in the meanwhile the company is bringing the AMG version in as a direct import. Given that the regular CLA is delayed, Mercedes-Benz is timing it well with the AMG, to stir up the market just when Audi is gearing up to launch its A3 sedan! 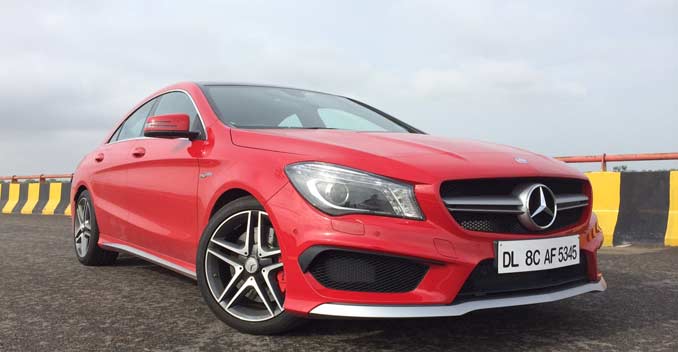 The combination of the compact proportions and the fact that this car has an AMG heart, fuse well together, and brings along a sporty character that one doesn't expect from a small sedan.

The car's 2.0-litre engine is special. So special that it won in its class at the Engine of the Year awards. It's a smart, and perhaps a brave move by AMG to go with what is now the smallest displacement engine that it makes. So it is not a 6- cylinder, it is a nice 4-cylinder in-line unit, and is also the most powerful one in the world (in terms of series production 4-cyl engines only). It has got that great power delivery but the part that was really nice for me is the amount of torque this engine throws out. Peak torque is 450Nm, but what's great is that it starts to kick in as early as 2250 rpm. You could be cruising along and you're still getting to tap into that torque. Nice! The CLA 45 AMG does not have the deep-throated growl of the other AMGs, but it still sounds quite relishing! And there is a delightful and very apparent wastegate whistle, which makes your heart soar!

Sure this engine will rarely make the popping and cracking sounds you expect from an AMG, and some of its growl is muted. But for a car this size, it does it justice. 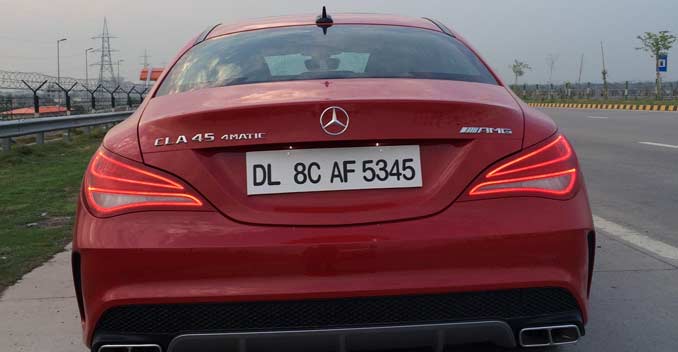 The car has all wheel drive, though for the most part - especially at slower speeds or in city driving - power ends up with the front wheels. As much as 50% of the power and torque shifts to the rear wheels as and when the car senses its needed. That, in conjunction with the responsive paddle shift, affords you a really sporty drive, something I thoroughly enjoyed.

The downside to this sporty appeal is that the car is a bit stiff; and on a concrete highway or on bad roads, all the vibrations and shudders travel up to you. The sports seats hold you very well though, and are electrically adjustable for the sides of the back and seat to curve in to hug you better. Sweet!

One thing that has to be said about this car is it's extremely good looking. In fact, I'm going to go so far is to say that it's probably the best looking sedan on the roads right now. Mark Fetherston and team have done a fantastic job here. One look, and your jaw drops. The immediate impression is how much of a classic 4-door coupe like the CLS it is. The organic styling quality that we saw in the new C-Class finds its roots in the CLA. Especially in the tail-lights and head-lights. 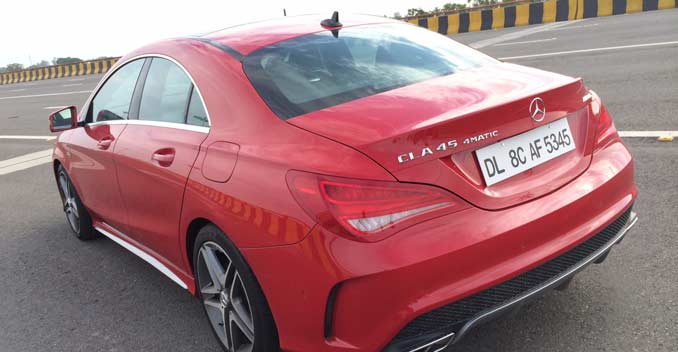 And that's the basic CLA! This one being an AMG model, styling is even more pronounced and aggressive. Flared bumpers with wide air dams and intakes, side-skirt and special badging - like the turbo on the side and AMG at the rear and on the wheels, and the AMG exhaust pipes.

Mercedes-Benz will launch the car on the 22nd of this month. Expect prices within kissing distance of the 80 lakh rupee mark. Don't give me that look! Its an AMG and a direct import; and its not meant to be a practical compact car anyway! If you want one of those, check out the A or B Class, the BMW 1 Series, or in fact the soon-to-be-launched Audi A3. Or wait for the stock CLA that arrives next year.