It gets Ferrari's signature retractable hard top architecture which made its debut on the Berlinetta in 2011. 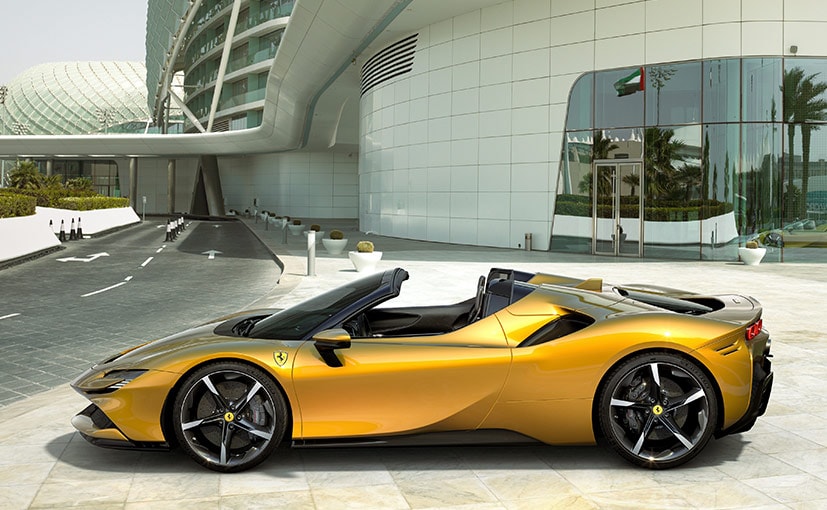 This state-of-the-art system adjusts power flows to suit the conditions of use. All the driver has to do is to select one of the power unit modes (eDrive, Hybrid, Performance and Qualify) on the brand-new eManettino for a wonderfully exhilarating experience behind the wheel. Like the SF90 Stradale, the SF90 Spider also has All Wheel Drive (AWD). 0-100 kmph is done in just 2.5 seconds while 0-200 kmph is done in just 7 seconds while top speed is rated at 341 kmph 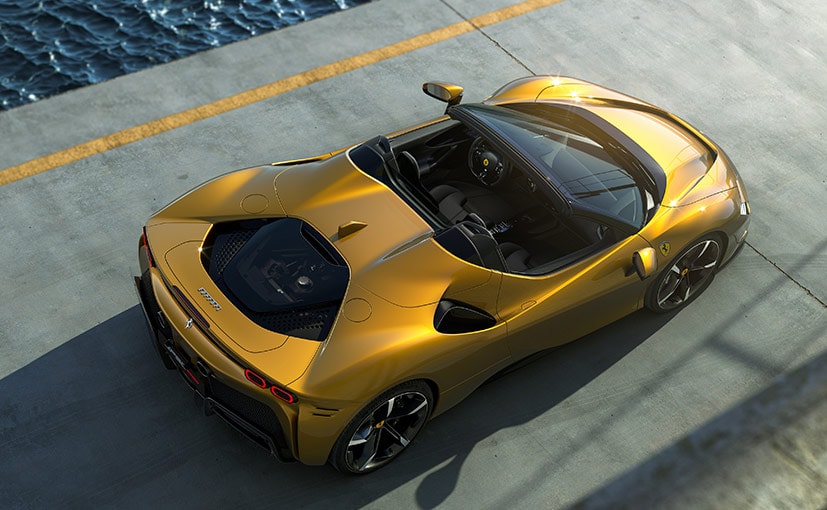 The mechanical layout adopted by the Maranello engineers has allowed them to further advance the car's dynamic control system. The latter, now referred to as the eSSC, verifies the car's dynamic status in real time. Based on that information, it controls vehicle stability by delivering torque independently via the front electric engines to the inside and outside wheel (Torque Vectoring), significantly improving traction coming out of corners and making it much simpler and more intuitive to drive on the limit with confidence. 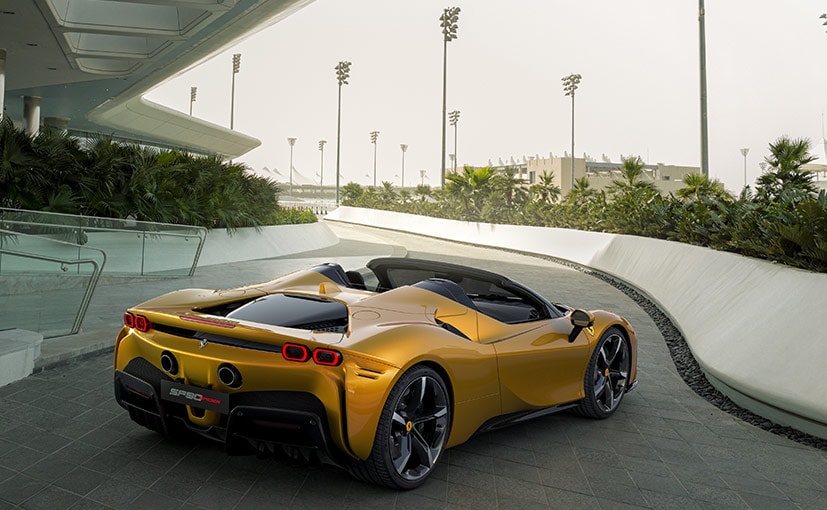 From an aerodynamic perspective, the result of the development process is an extreme design which, with a maximum of 390 kg of downforce at 250 kmph. The many innovative, patented solutions adopted include most notably the shut-off Gurney, an active system at the rear of the car which adapts to driving conditions, and the forged wheels with wing profiles which recall Ferrari's F1-derived blown geometry.

The starting point for the SF90 Spider design was to ensure it remained as faithful as possible to the SF90 Stradale's signature styling. The Ferrari Styling Centre's meticulous crafting of the tonneau area has integrated it seamlessly with the rest of the car, an achievement that is even more astonishing because the V8 is still clearly visible through the engine bay cover despite the inclusion of the RHT stowage. The V8 thus remains the star of the show and very much on display whether the RHT is deployed or retracted. 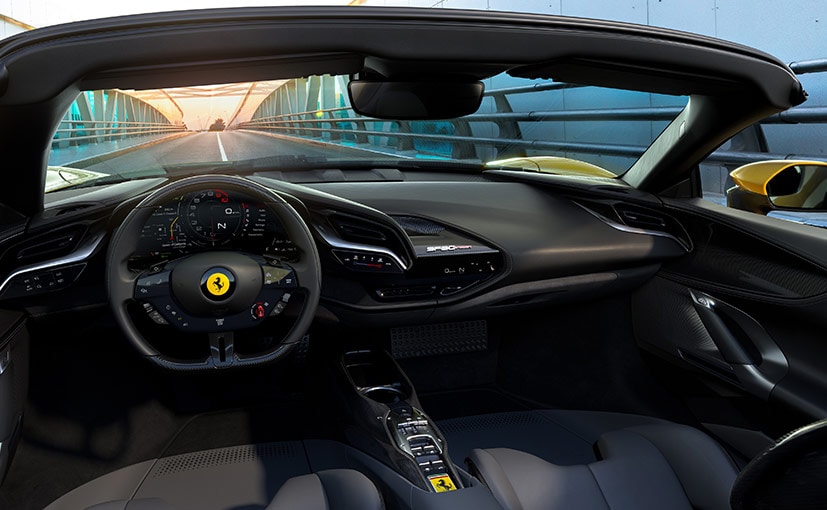 The track-derived philosophy is the key driver of ergonomics and styling of the interior. The company has produced an innovative new HMI concept that includes a new steering wheel with a touchpad that allows drivers to control virtually every aspect of the car without moving their hands. The central instrument cluster is now entirely digital with a curved HD screen, which can be fully configured and controlled using the controls on the steering wheel. On the central tunnel, the automatic gearbox controls are now actioned by a grille-style feature that references Ferrari's glorious and iconic manual gearshift gate.

Like all Prancing Horse spiders, the SF90 Spider sports a retractable hard top, which guarantees optimal noise insulation and protection from the elements when deployed, does not deform at high speeds and provides exceptional occupant space and comfort. The RHT is so compact, simple and light, it can be actioned in just 14 seconds and can be deployed when the car is on the move. 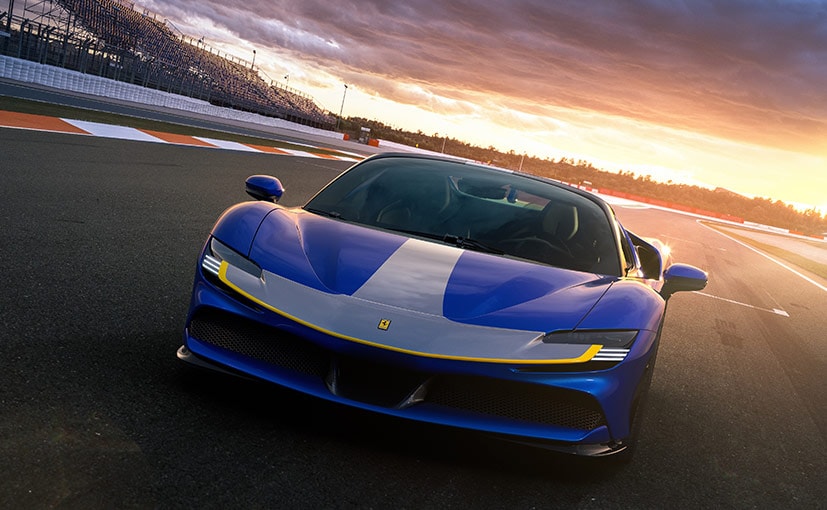 As is the case with the SF90 Stradale, the SF90 Spider is also available with a dedicated specification for owners that want to push its track car vocation to the extreme. The Assetto Fiorano includes a list of exclusive upgrades that set it apart from the standard car, not least Multimatic shock absorbers derived from the Prancing Horse's GT racing experience and optimised for track use. Others include the adoption of high performance materials (such as carbon-fibre and titanium) that have shaved 21 kg off the car's weight, a carbon-fibre rear spoiler and road-homologated Michelin Pilot Sport Cup 2 tyres designed to improve track performance in the dry, thanks to a softer compound and fewer grooves.