Siddharth has driven the hot new BMW 220d (the all-new 2 Series Gran Coup) as it should be tested - by driving it up into the mountains! Its dynamics, performance and tech are pushed hard to see if the car lives up to being a true BMW sedan. 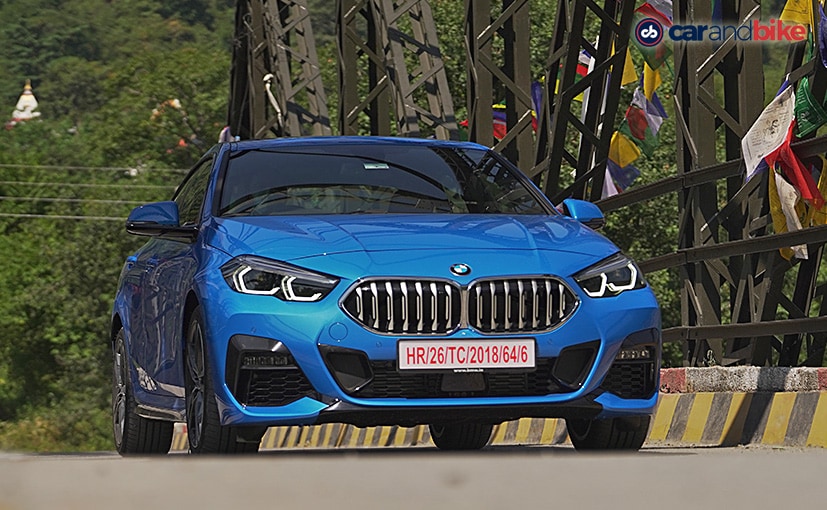 The BMW 2 Series is in its second generation and the first body style to be introduced for the new model is the first ever 4-door sedan - that assumes the guise of a '4-door Coupé'. The 2 Series Gran Coupé is a first then for BMW. The 2 Series family always had a traditional 2-door Coupé and convertible, and its potent M avatar, a 5 door MPV that was later stretched to a longer 7 seater version. And while India may have got the M2 in the previous gen, the new Gran Coupé is also the first 2 Series in India.

In markets like China, BMW has had a 1 Series sedan in the past, and India never got that. So this makes the 2 Series Gran Coupé or 2 GC the smallest entry sedan ever in BMW India's lineup. The car may not quite be its lowest entry price point in the market, as the X1 compact SUV does start lower. But given that the reputation of BMW as a brand still rests with its sporty sedans, the 2 GC becomes significant. Very significant! 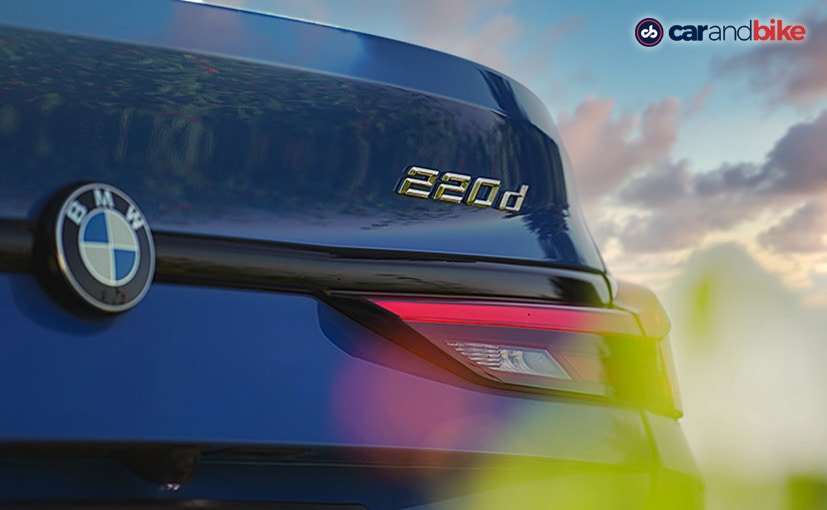 The car with us is the BMW 220d M Sport, which is the diesel option and it's offered in the higher trim spec

The car I have is the 220d M Sport - that means it is the diesel and in the higher trim spec. At first glance the sedan is typically BMW. I have spent two days driving this little beast - and yes it is a beast - along the winding mountain roads between Dehdradun and Mussoorie (and beyond), in messy city traffic, and also on some flat and straight expressway. The Misano Blue metallic paintjob on my test car sure gets heads turning, as I discovered driving the car up in the foothills of the mighty Himalayas. The car's design gets all the new elements we are seeing in recent BMWs, and yet also inherits the classic BMW motifs. The Hoffmeister kink (google that!), the kidney grille (not as large as one feared), and very sexy LED lighting treatment. The proprtions are compact and taut, and the metal work gives the car the muscle to imply performance - and that is very apt indeed, as you shall soon find out. 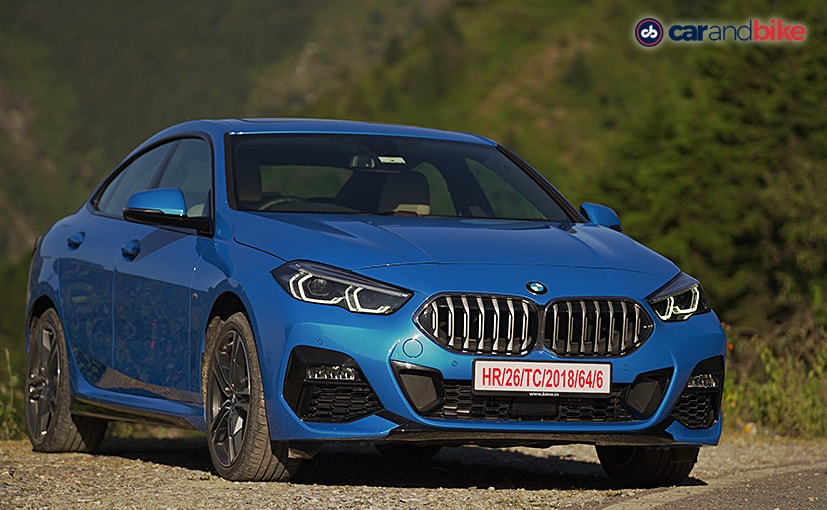 The new 2 Series Gran Coupé comes in this Misano Blue Metallic paintjob, and it gets all the design elements we have seen in recent BMWs

The rear is very different to BMW's usually slimmer tailgates and heavier bumpers. And, in fact, I will say this - when I first saw the 2 GC at the Los Angeles Auto Show in November 2019, I had found the rear hideous! Seeing it on the road, and in natural surroundings, and also spending time with it - has mellowed me a lot. I now understand how the heavy rear is broken smartly by both horizontal and vertical elements in the design, and the car actually looks bigger for it - and very high end. The taillights are simply beautiful. So it is an attractive car and will get you the attention you may want, and yet it is not flashy or flamboyant, especially in the face. The frameless doors are a nice Gran Coupé prerequisite. It comes to us in two trims - the 220d Sportline and the aforementioned 220d M Sport. There are 7 colours but the Storm Boy (grey), Snapper Rocks (teal/aqua), and the Misano Blue are exclusive to the M Sport only. The size and appeal is very much in line with the previous generations of the 3 Series - a car that has grown in size over the past 3 generations anyway. So, the 2 GC is ample and yet compact as these figures do indicate. The dimensions will surprise you inside too, but I will get to that later, because really, what this car is all about is not its looks or space. It is about its performance. 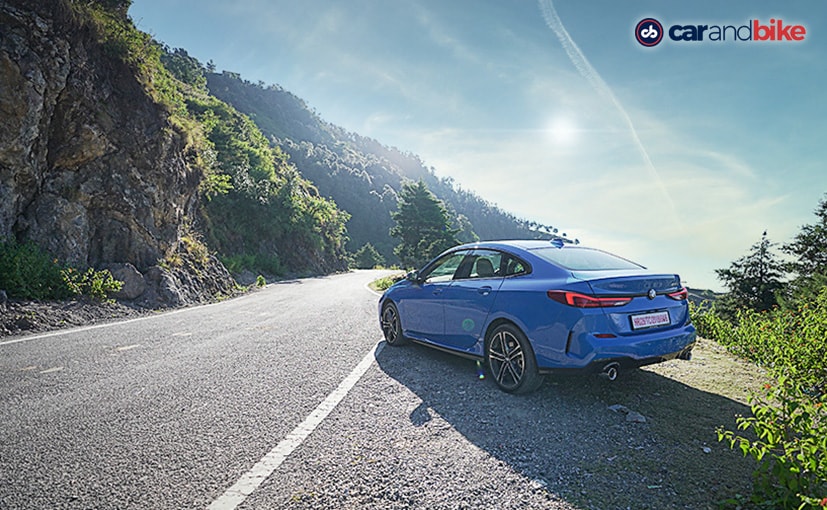 The heavy rear is broken smartly by both horizontal and vertical elements in the design, and that makes the car actually look bigger and high end

The car comes to us in petrol and diesel avatars. The latter has arrived first and is being assembled locally at the BMW India plant in Chennai. The petrol will get here in a few months. Don't forget BMW had committed to giving us clean BS6 diesels on its whole model range, and is living up to that with the new 2 GC too. I am glad that BMW has - since the tradition of sporty diesels from BMW is a rich legacy the 2 GC follows. The 220d uses the urea/AdBlue based 'BMW BluePerformance' emission reduction system. 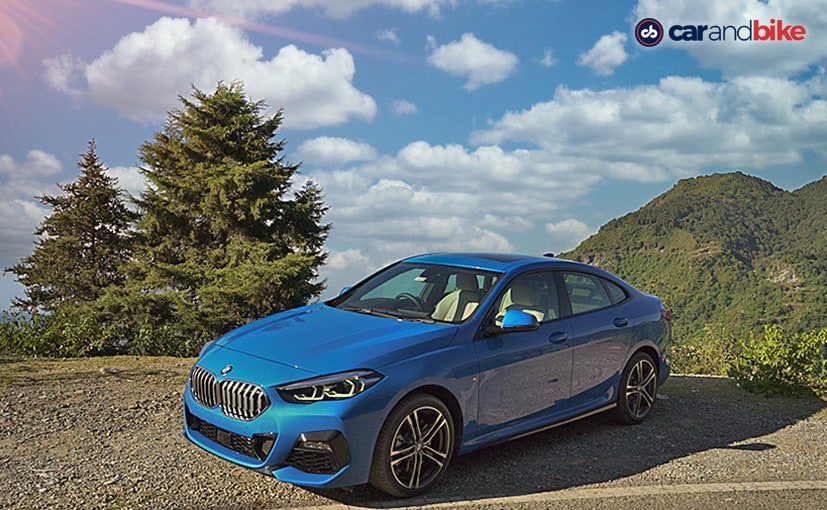 The 2 Series is built on the brand's UKL front wheel drive modular platform. So like the X1 and the MINI Countryman, it does get an xDrive or all wheel drive version in Europe. India will only get the two wheel drive version. Even the petrol we will get will be the 220i - which will use the same 2-litre, 189 bhp engine as the X1 does. It will also likely get the 7-Speed Steptronic transmission. Expect that to launch by the year-end. 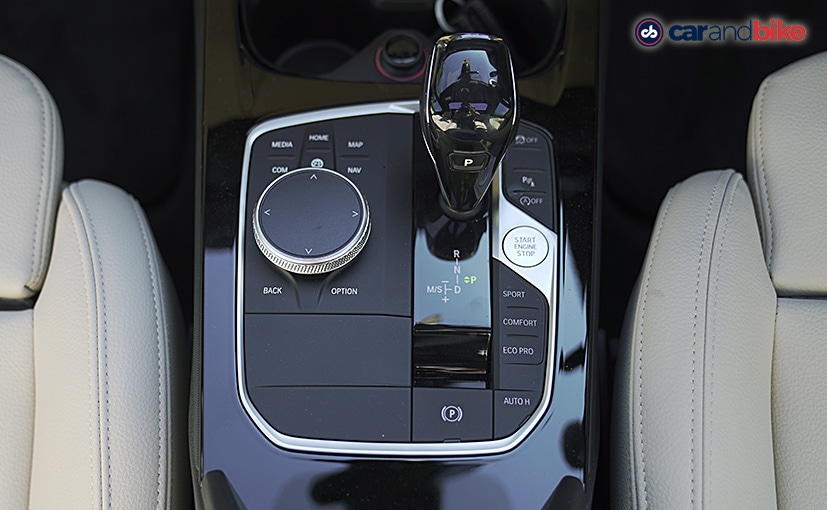 The car gets the familiar torque converter automatic transmission, with paddle shifters as standard across the two variants

The diesel twin power turbo 4-cylinder engine is what I am testing then. Its figures are ample for sure, especially given the car's size and weight. The torque converter gearbox is also familiar territory indeed. And yes before you ask - it does come with paddle shifters as standard across the two variants. The fact that its diesel doesn't take away from the performance at all. You get a huge sense of refinement and terrific response. And that is really the headline with the 2 GC. The car is quick, agile and effortless. That it retains the BMW driving character despite being a front wheel architecture model is remarkable. 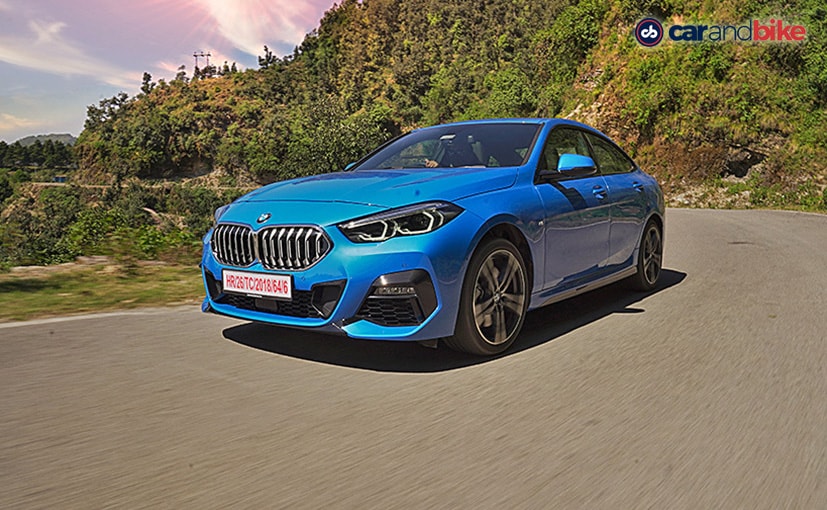 There is a carry over from the BMWi brand's i3 to the 2GC. The ARB or actuator contiguous wheel slip limitation system helps with reducing wheel slip, provides more traction, and works with the DSC or dynamic stability control system to help cut understeer. This helps with superb cornering and more controlled acceleration - especially in wet conditions. The ample torque on the diesel only adds to that. There is a touch of lag you will detect - especially at lower rpms and mostly only in city traffic. But the engine sounds very nice too, and has a growly note. You also get servotronic - BMW's steering assist, cornering brake control, traction control and electronic differential lock control - all as standard. The car's steering is excellent, both in feel and on road performance. The M Sport gets the additional advatage of the adaptive suspension and the M Sport steering. The 2 GC comes with the usual drives modes - Sport, Comfort and Eco Pro. The Eco Pro mode can help cut fuel consumption by as much as 20 per cent, especially when using the coasting function. And what is nice is like all new BMWs you can set individual preferences and tweak those modes to your liking, to be either more or less aggressive. 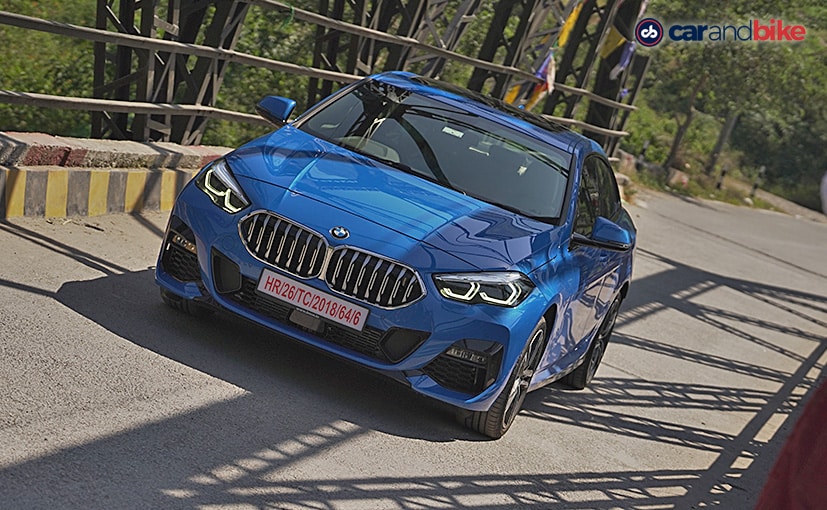 Also like all other recent BMWs you get a lot on the car in terms of equipment. On safety the car packs in a lot. 6 airbags, ISOFIX child seat mounts, 3-point seatbelts for all 5 occupants, ABS or anti-lock brakes, stability and traction control that I already mentioned, runflat tyres and tyre pressure monitoring, and a lot more - and these are all standard across both variants. 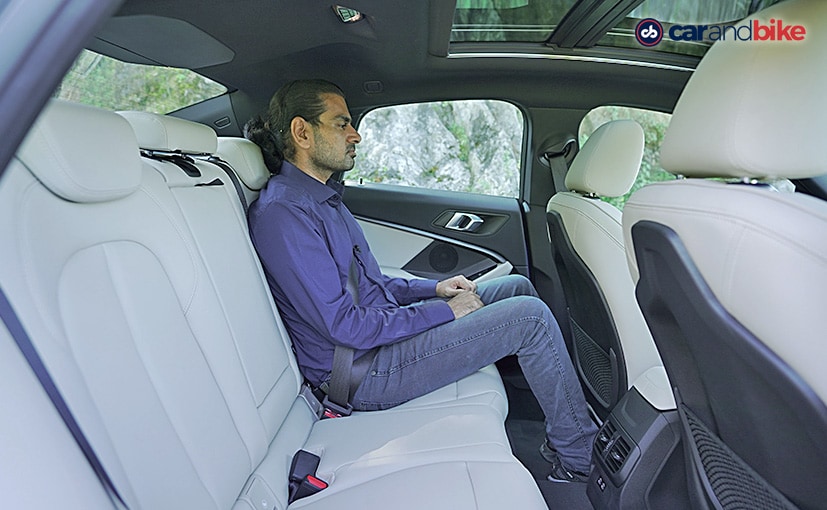 The India spec model is also loaded on features, especially this M Sport trim. So, there is a 10.25 inch touchscreen that is angled towards the driver. It gives you the latest iDrive interface, the choice of Apple CarPlay and Android Auto, and you can connect your phone wirelessly to the system which is great. A wireless charger is standard on the M Sport, while the BMW staples like gesture control, and the iDrive controller with an inbuilt touchpad are on both variants. Also standard is the live cockpit or virtual instrument cluster with its 7 inch screen. 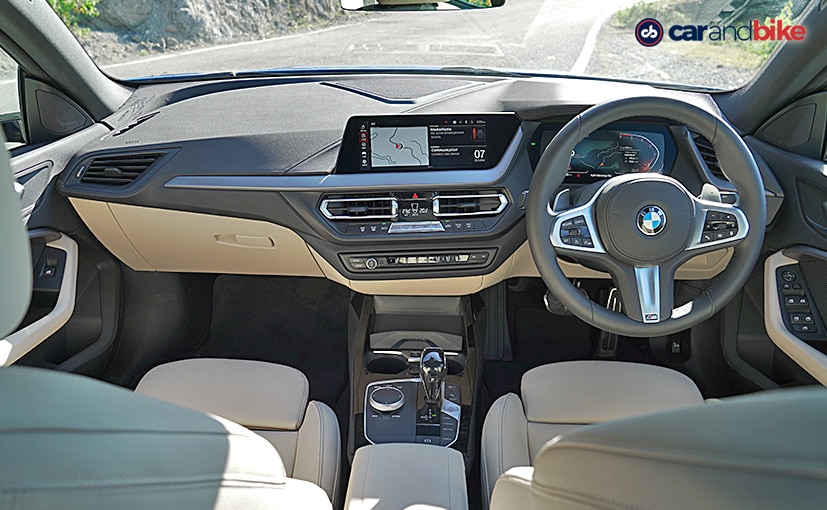 The cabin feels premium, and it comes with live cockpit or virtual instrument cluster with its 7 inch screen

The ambient lighting is pretty cool, as it also includes these patterned strips on the dash and door. They give you not just different colour options for the interior light, but also an interesting pattern. Something different, right? The M Sport gets the 'Illuminated Berlin' motif, while the Sport-line gets the 'Illuminated Boston' trim. The interior build and material quality is impeccable, and will really hit home for a first time premium car buyer. The layout is familiar BMW territory and the whole focus is on great fit and finish. The cabin feels premium though the seats are firm and not the sink-in type. For me that is correct on a sporty sedan, some buyers may not find it ideal. The real surprise is the space you get in the back seat. While under thigh support could have been better, the overall sense of space is great, despite the sloping roofline. You can get either a two-tone beige and black trim or all-black. So to anwer the question - does it work as a family car? Yes. But as a primarily chauffeur driven ride you may still be better of with the 3 or 5 Series. 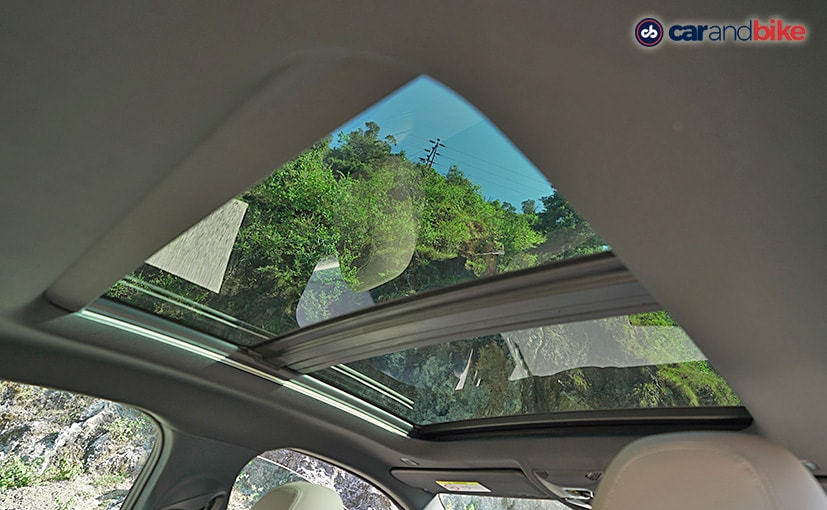 The BMW 2 Series Gran Coupé also comes with a large, panoramic sunroof among other creature comforts

The car's prices are more or less in-line with what we expected, at ₹ 39.3 lakh for the 220d Sport-line and ₹ 41.4 lakh for the 220d M Sport. In my opinion, it would have been better had both variants stayed under ₹ 40 lakh ex-showroom. The X1 remains the least expensive model to step in to the BMW family, but the 2 Series will likely be seen as the true entry BMW because of its driving prowess.