Is orange the new red? As Lamborghini unleashes the Huracan Performante, it is promising not only its most powerful V10 yet, but also bringing new materials and technology to play. We are the only Indian media to get our hands on the scorching hot Huracn Performante. And we are testing it in the historic town of Imola, Italy. 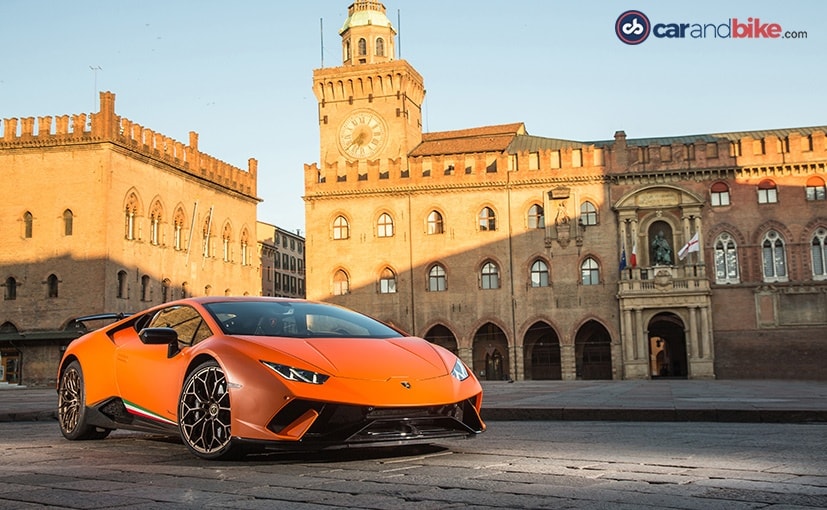 It is the latest raging bull, and I am one of the very few who got a chance to try and tame it. Sounds dramatic doesn't it? Well, when the car in question is the Lamborghini Huracan Performante, a little drama is to be expected! As if this wasn't remarkable enough already, the venue for my drive with this beast was in Bologna, close to the legendary sports car maker's headquarters - at the famous Imola circuit. Yes this is the track where Ayrton Senna perished, which made it poignant for me too. But since visiting it (and driving on it) was something I always wanted to do - I was glad to do it in such a special car. The anti-clockwise circuit is 5 kms long and the car is the lighter and lither, potent and powerful, faster and more furious avatar of the already menacing 10-cylinder Huracan. 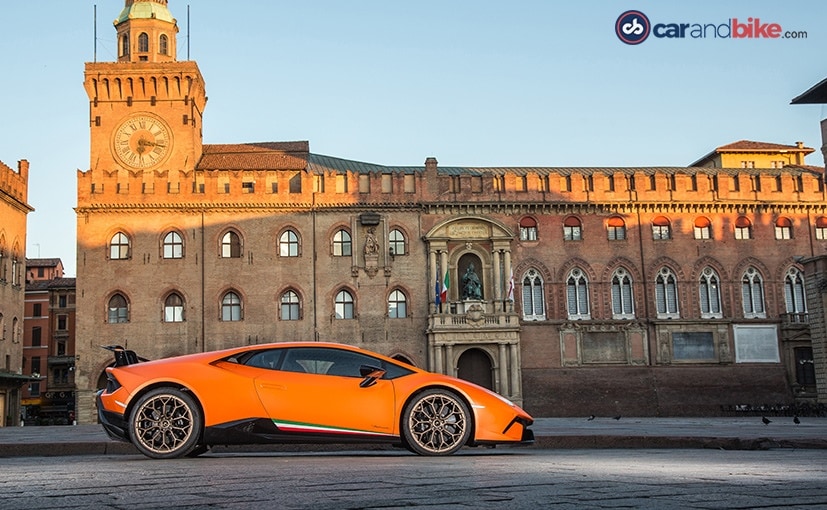 With the Huracan Performante, Lamborghini takes on a whole new direction in many ways. So while the Huracan's predecessor - the Gallardo got a Superleggera variant, the Performante does more than simply go super lightweight. What it gives you is a supercar that stays even more planted and offers mind blowing dynamics - in excess of the Huracan coupé. While it gets faster and more powerful, it's also gains handling prowess. So let me tell you all about how that's been done. First though I had to get my own feel for the new car. After some initial warm up laps, things started to heat up. And the Imola track is everything I had heard it is. Extremely fast corners, very technical and some surprising elevation changes and blind turns. I found myself hitting the pace and taking the racing line with relative ease, since the car was one with me - responding with alacrity to every input, and correcting me every now and then. It recovered from every mistake I was making with such finesse, I was barely noticing them. Now there are few cars that can do that so well! 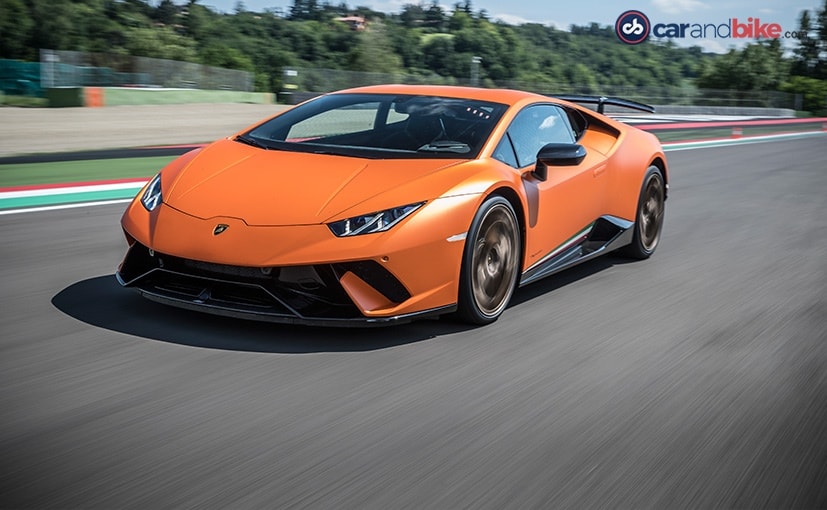 The Performante also has a giant wing at the back, and plenty more aerodynamics thanks to ALA - which incidentally is also the Italian word for 'wing'. In this case it stands for Aerodinamica Lamborghini Attiva - or as we'd understand it - Lamborghini's new active aerodynamics. The ALA system is brand new for Lamborghini, and helps provides an active variation of aero load for high downforce or low drag. The ALA system uses active flaps in the front and rear of the car. Lamborghini's Piattaforma Inerziale or LPI governs the car's electronic systems and now integrates with ALA. This allows those flaps to activate in less than 500 milliseconds to ensure the best aerodynamic set-up for the car in any condition. So when ALA is off, the flaps inside the front spoiler are closed, giving you high downforce for high-speed cornering. But when ALA is on, the front flaps are opened by its own electric motor, reducing air pressure on the front spoiler and directing air flow via an inner channel and through the underside of the car. This drastically reduces drag and optimises conditions for maximum acceleration and top speed. 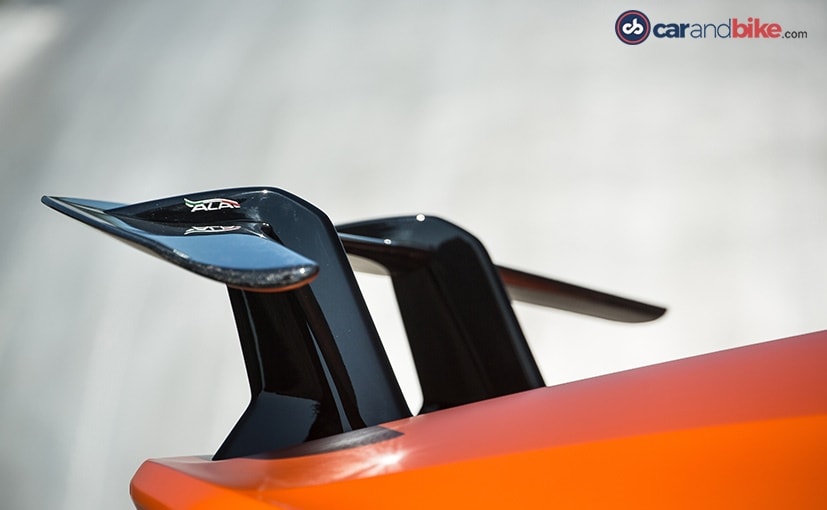 At the back, the car has four ducts - the central two are always open to allow under-hood ventilation and exhaust cooling. The two outer ducts are connected to the inner channels of the rear wing. The air flow through the rear wing channels is controlled by two electro-actuated flaps. The entire system is 80% lighter than a traditional hydraulic system. 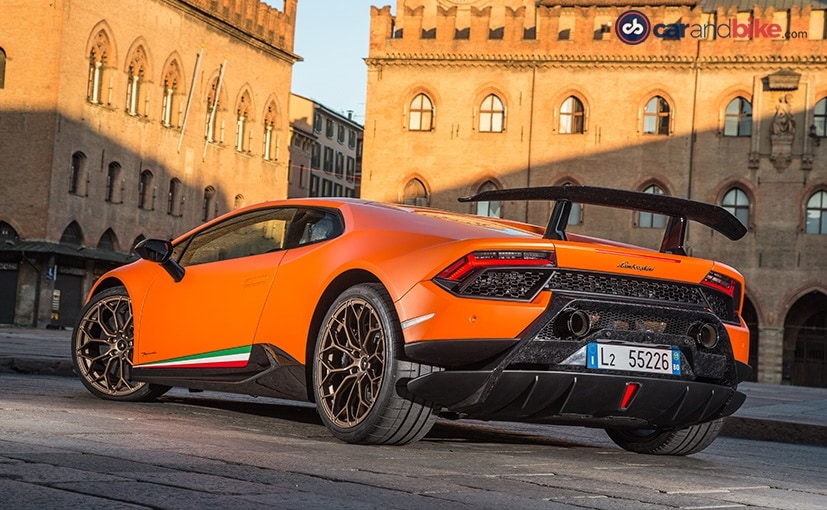 With ALA off you get a staggering 750% more maximum vertical downforce compared to a Huracan coupé! LPI turns ALA on in high throttle conditions, to reduce drag and maximise the car's acceleration. The rear wing's inner air channel is also split for aero vectoring for high speed cornering. Depending on the direction of the turn, the LPI instructs ALA to be switched on in either the right or left side of the spoiler, increasing downforce and traction on the inner wheel. This gives you more stability and also needs you to provide lesser steering input. Wow - how did they think of that, right? Based on a hybrid aluminium and carbon fibre frame, the Performante's body also uses 'Forged Composite' - a new material Lamborghini has developed. It uses chopped carbon fibre bits in a resin, to make lightweight, complex geometrical shapes beyond what carbon fibre can achieve, while maintaining optimum stiffness. The Performante has Forged Composite in structural components like the front and rear spoilers, the engine cover, rear bumper and aerodynamic diffuser, which helps that weight loss I mentioned earlier. To keep the theme going, the AC vents, door handles, central console and paddles are also made with Forged Composite. 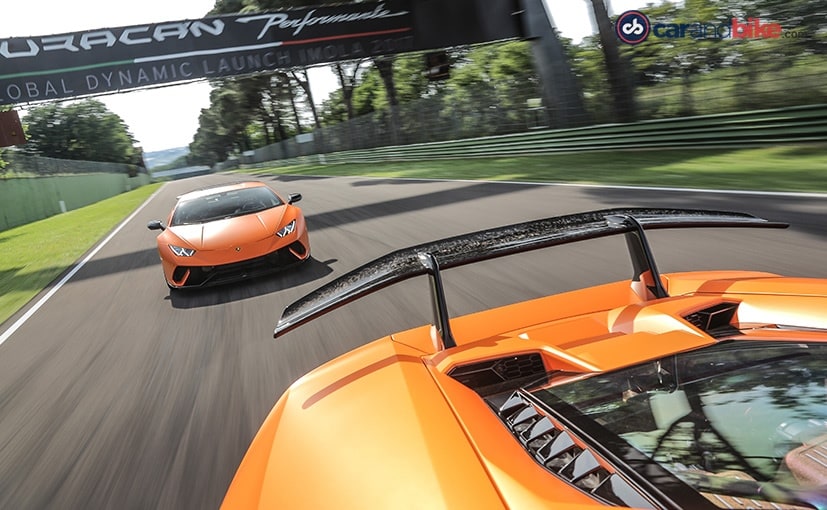 The 7-Speed automatic gearbox is very quick and sends a liberal amount of torque to the wheels. The V10's Peak torque comes in at 600 Nm (at 6500 rpm), and the engine's optimised torque curve gives you seventy percent of the torque at just 1000 rpm. Maximum power is 631 bhp, making this the most powerful V10 engine Lamborghini has ever made. The Performante gives you 30 extra horses, 40 Nm more torque and has dropped 40 kgs over the plain old coupé. There is a toggle switch is at the base of the flat-bottomed steering wheel lets you switch from Corsa (track), to Sport, to Strada (road). I had the car in Corsa mode naturally. After 8-10 laps I began to understand just how good a job Lamborghini's engineers had done with the Performante. And I also realised the car was really making me look good! It has a very stiff chassis, supremely quick acceleration, and perfect steering control. It cuts through the track like a hot knife through butter! It comes in nice and smooth as you hit the brake, and as soon as you lift off, take the corner, drop a gear and slam the gas - the car flies through it. 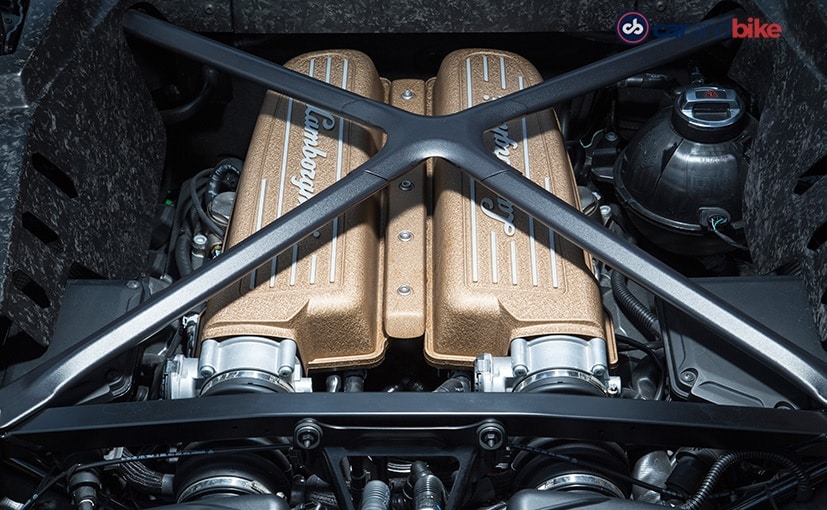 The Huracan Performante's top speed is 325 kmph, and though I did not attempt to test that claim, I came close enough to the 300 mark. The naturally aspirated V10 gets a new air intake system that comes from Lamborghini's motorsport learnings. The timing valves are also lighter and provide greater lift. The exhaust system has also been updated and has reduced backpressure. This not only helps the light weighting of the car, but helps provide an even sweeter sound! 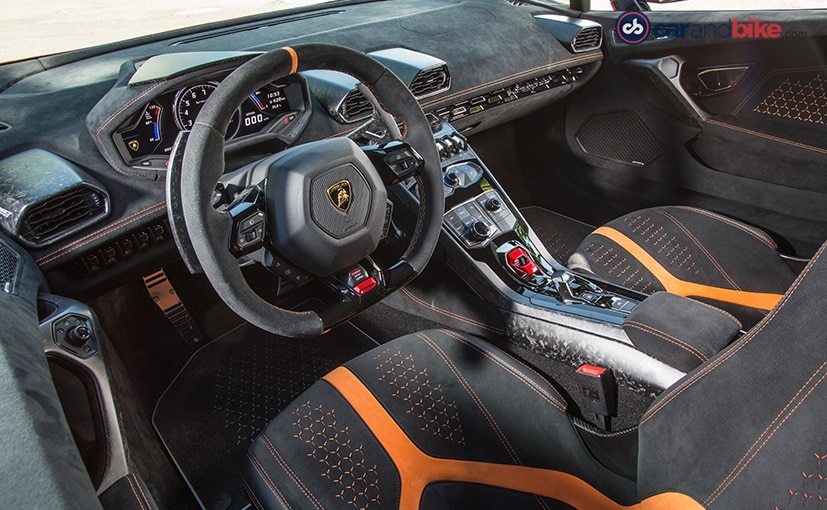 The suspension on the Performante is stiffer and more track-oriented than the coupé's The car has both passive and active suspension; spring and bar vertical stiffness is up 10%, and 15% higher on roll stiffness. The new setup helps improve body control. It also gives you tighter wheel control, especially when you are in Corsa mode and on a track. The LDF dual-clutch gearbox has also been tuned to deliver to that kind of demand from the car's performance. It's very fast as I have already stated, and is the true champion of this enterprise besides the engine of course. The car has permanent 4-wheel drive and uses the 5th generation of the fully electronic Haldex system. 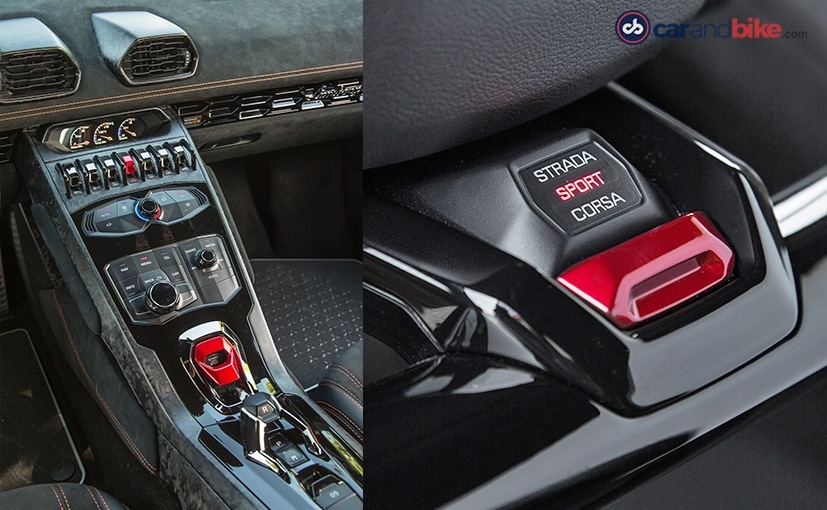 Lamborghini's CEO Stefano Domenicali was also spending the day with us - casually hanging out in a polo tee and jeans. Unlike its rivals, Lamborghini has not gone the turbo route with its latest launches - something the sportscar world has taken note of for sure! And he was quick to assure me that Lamborghini is going to stay the course with the naturally-aspirated engine lineup. And so the Performante's V10 is most definitely not the last of its kind from Lamborghini. Domenicali says that while they will keep a keen eye on all possibilities, including turbo applications, they find no need to go that route for the foreseeable future. And yes that includes the Urus SUV that will debut by the year's end. 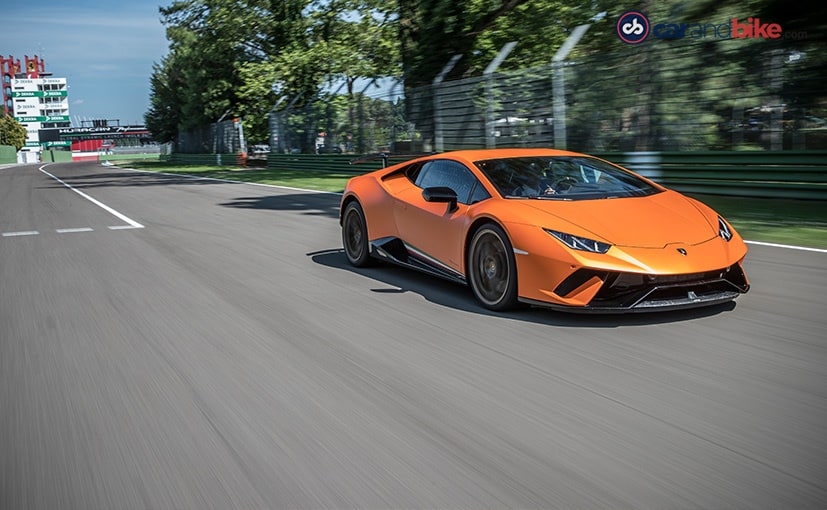 The Huracan Performante has already been launched in India at - hold your breath now - ₹ 3.97 crore ex-showroom Delhi. Yes - for a chosen few then isn't it? Not like Lamborghini will be allocating many to India anyway. That price tag notwithstanding, I drove it like I own it! And carried that feeling as I switched cars and chose a Giallo Horus or yellow Performante to get out on the regular road. Boy did I get stared at a lot! Driving on some nice winding country highways you can really get that naturally aspirated V10 to sing! And as I slowed down to a deep rumble through every village or town it was great to see everyone simply drop what they were doing and stare at the yellow monster! The Performante has great road presence and road manners, and soon I began to enjoy my time with it on the open road. After all the talk about its track bias, the good news is that even on regular roads this car is actually a lot of fun. It's not too hard or too technical or too stiff, it's comfortable, it's easy to drive; and so even on country or city roads, it still packs quite a punch. 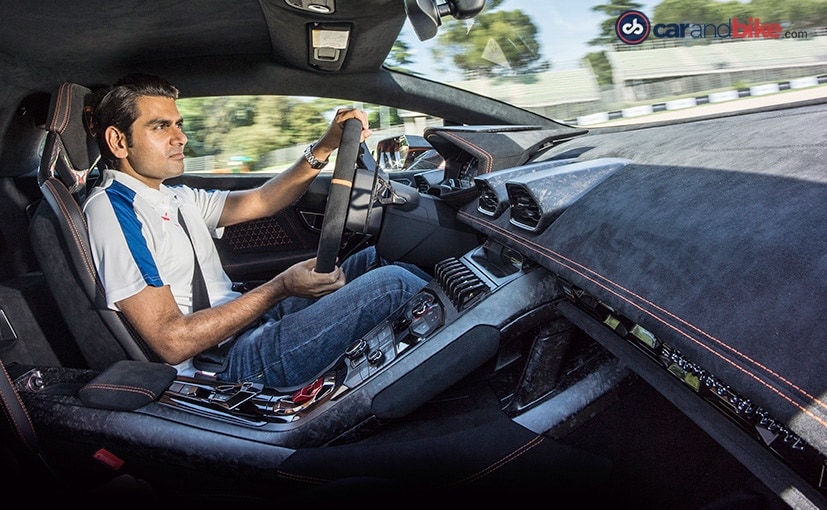 Yes this is an absolute modern-day masterpiece. It is precise and insane on the track, and yet exhilarating and powerful on the road. So as I reluctantly parted with the Performante at the close of the day's fun, I could only hand over the keys to both the yellow and orange beasts with the promise to return to meet their SUV sibling - Urus -that will be the next big thing from the house of the Raging Bull.