The third generation Porsche Cayenne finally comes to India in September 2018. India will get the much hyped new Cayenne E-Hybrid for the first time. It's a significant step by Porsche India, and the car is capable, clever and quite fun too. 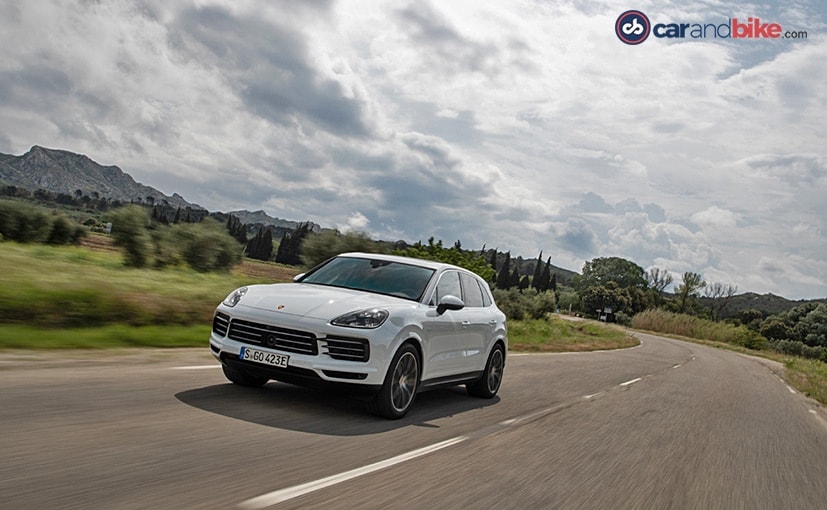 It is always a bigger challenge to improve on a benchmark car, since it's a given that any new generation has to best the previous one. With the new 3rd generation Porsche Cayenne you see that straight away - pretty much in every department. So it was no surprise it went on to become first runner-up for the World Luxury Car of the Year award. So when I was invited to drive the new hybrid, oh excuse me - E-Hybrid - my expectations immediately scaled a few peaks. And having driven the car fairly extensively I am not disappointed. I was in the Cote d'Azur province of southern France to drive this new car. And frankly the only real disappointment was the incessant lashing rain I had to contend with! Yes, south of France and no blue skies, no sun, no gorgeous seascapes - sacre bleu! But the new Porsche Cayenne E-Hybrid more than made up for it. It's better looking; better on performance, better on its green credentials, and even has a better cabin - than the previous model. 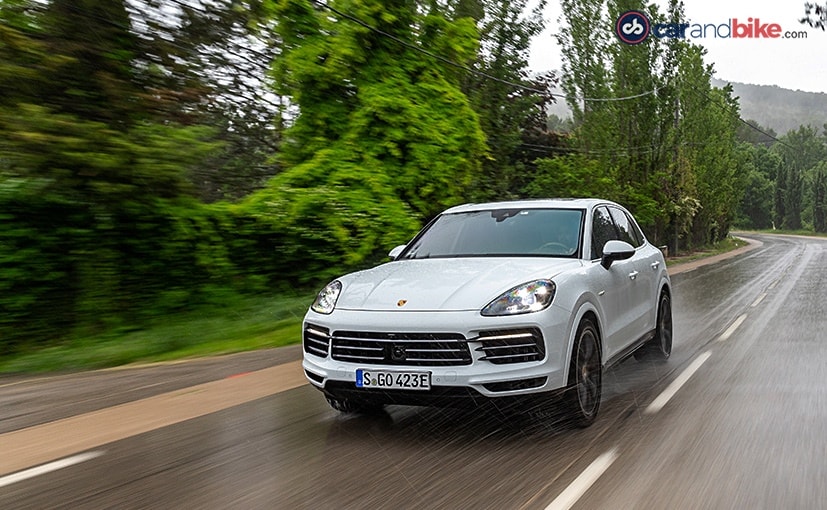 So the hybrid system uses a 100 kW motor married to a 3-litre V6 turbo petrol engine. The individual specs of the two are as follows: The V6 makes 333 bhp and 450 Nm of torque, while the electric side gives you 133 bhp and 400 Nm. But to put it accurately the combined system output is 453 bhp and - wait for it - 700 Nm of peak torque. This becomes significant on several levels. First, and most obvious is that the two don't work independently as in some other hybrids (where petrol powers one axle and electricity the other). So it's always combined power or torque (unless you switch to pure electric mode of course - but even then the juice is going to all 4 wheels). The second thing is that that huge amount of torque no doubt helps the all-wheel drive to work even more quickly to give you the traction you need - at any wheel. This reduces slippage and gives you better control even on tarmac. And then that leads me to the crucial point - does that then mean you don't really need the diesel Cayenne anymore? Hmm - lets chew on that, shall we? 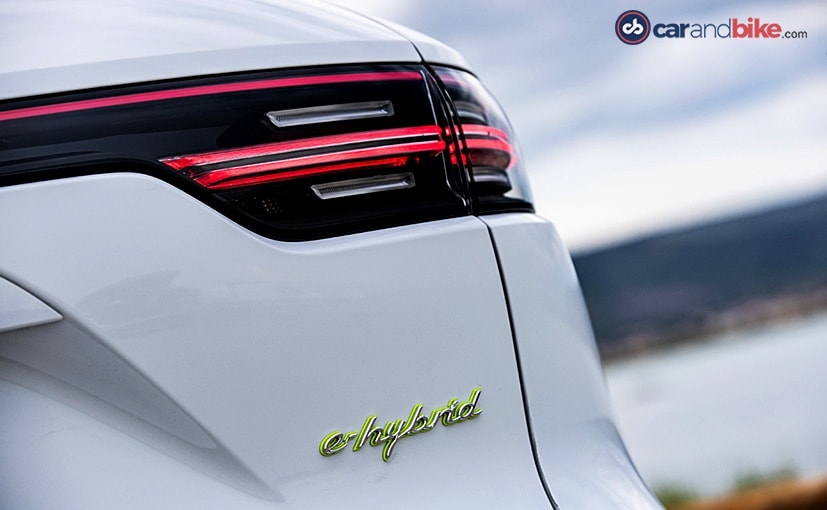 The Cayenne E-Hybrid uses the boost principle from the 918 Spyder - meaning combining electric and combustion engine power to create exhilarating performance. The car now uses a hang-on all-wheel drive, instead of the conventional Torsen system. This gives the car more efficient performance according to Porsche engineers, and the Cayenne is the first SUV in not just the Porsche stable but the entire VW group to get it. While I never did take the car offroad, there were plenty of broken roads on our route. Add the massive amounts of rain which meant lots of wet conditions, and the sense of control was indeed very reassuring. Porsche has come a long way since the first Cayenne hybrid prototype in 2007. That car used nickel metal hydride battery and had a 3.6-litre V6 petrol engine married to an electric motor. Its mileage stood at 10.2 kmpl. Then came the 2010 S-hybrid with a smaller 3-litre V6 and similar battery, and a mileage figure of 12.2 kmpl. The last model - the 2014 S E-Hybrid saw the switch to a Lithium-ion battery and gave us a mileage of 29.4 kmpl. The new car does it better - with a claimed mileage of 31.25 kmpl. All figures are under test conditions of course. 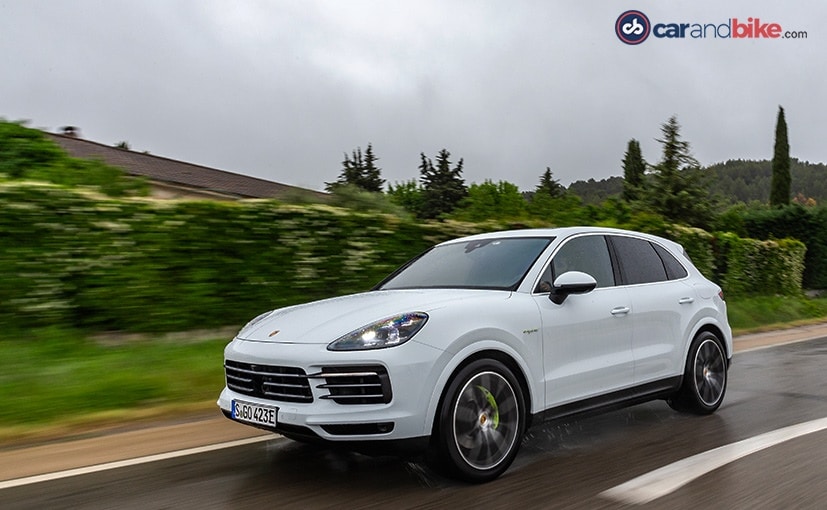 The new Cayenne E-Hybrid now does 0-100 kmph in 5 seconds (the conventional base petrol model does it in 6.2 secs). Top speed is 253 kmph, and its pure electric range is now increased to 44 km (I had expected Porsche to take this well past 50 or even 60 kms to be honest). But the regenerative charging for the 14.1 kWh battery is rather impressive. A plug-in charge will take 7.5 hours (using a conventional domestic plug - with a fast charger it's just over 3 hours). But the regenerative charge will give you as much as 50-60 per cent power even if the battery has fully depleted. The car gets different drive modes of course - and you can switch them using the steering-mounted dial, or using the menu on the touchscreen. 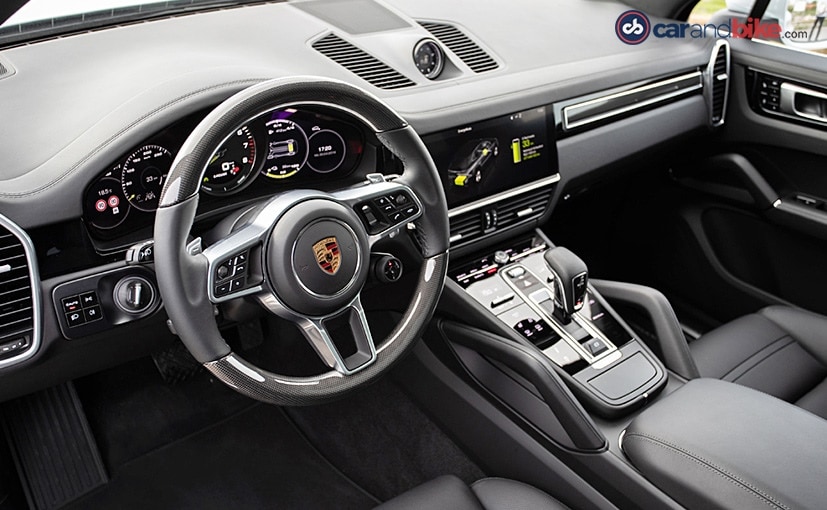 The default mode is Hybrid Auto. Next you have E-Power (pure electric), Sport and Sport+. You also have the E-Charge mode - which keeps the car in Hybrid Auto mode and helps with that battery recharge - and so does let the system use some of its power. But an even quicker charge happens in Sport+ mode! I had got my battery down to a 0 km electric range, and using the regenerative charging got it up to 33 kms! Given that the 44 km range is under European cycle test conditions, 33 kms is almost as good as a full charge in actual real-world conditions! You can also use the E-Hold feature to hold the battery's current charge so you can use it in a specific leg of your journey and it's not depleted by the time you get there - like for instance inside the city centre. 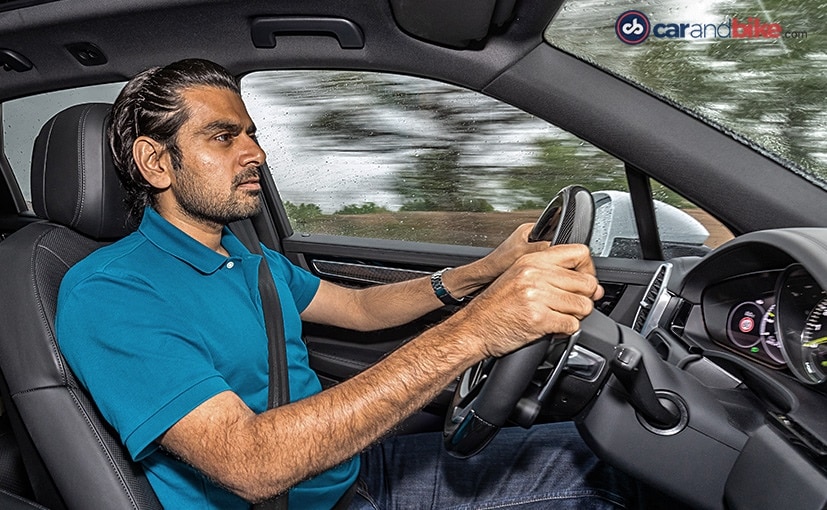 The Porsche Cayenne E-Hybrid will get through corners quickly, maintain its line superbly

The new Cayenne has become sportier and more dynamic than the 2nd gen was. The E-Hybrid maintains that character 100 per cent. It also now offers optional sport exhaust to get a meatier roar out of the V6! But even without that the engine sings - in a somewhat muted way! Start the car and it gets going on pure electric power, though the standard default driving mode is the Hybrid Auto. Switch to E-Power mode and the car will go as fast as 135 kmph (impressive) on battery power alone. Push the pedal hard for an emergency or quick acceleration manoeuvre and the system's kickdown function will instantly bring the engine to life and give you that boost. In fact, regardless of what mode you may be driving in - any such pedal pushdown sends the car into Sport+ mode for 20 seconds - to allow you to have that response you need. 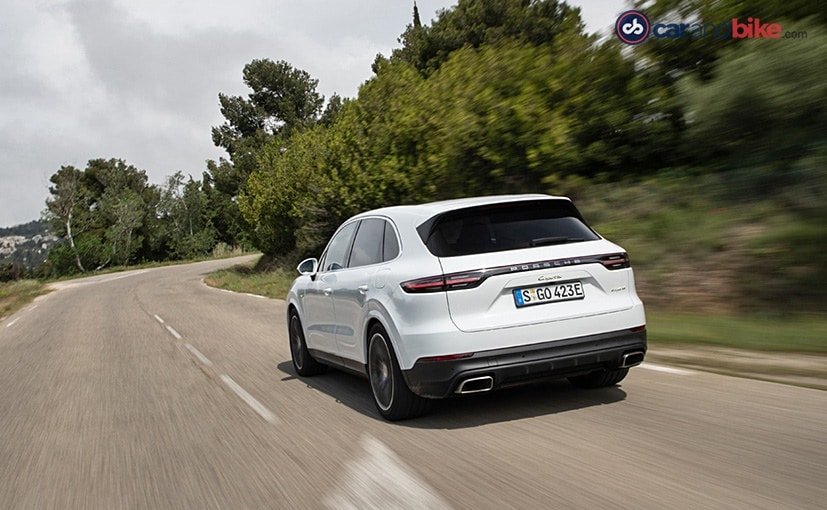 The E-Hybrid also gives you much as standard, including Porsche's Sport Chrono package

That's pretty cool, and smartly done I think. The 130 kg battery pack in the rear doesn't change the Cayenne's typical sporty character, great handling or ride quality to the extent you feel something's different. The car will get through corners quickly, maintain its line superbly, and give you the sense of performance we have come to expect from a Porsche SUV. All that with no drama. Throw in the taut, stiff and very precise steering and you're in business! The E-Hybrid will give you Cayenne S-like performance, complete with Cayenne diesel-like torque. 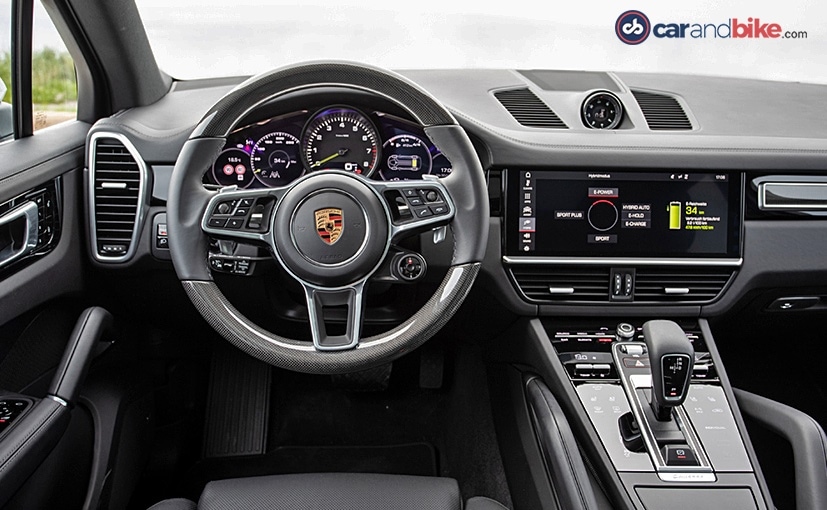 The new Cayenne has reduced the bulk of the previous car, in form and function

The car's cabin is very sleek, sexy and roomy. Carbon fibre, glossy black, polished metal or leather - there are several trim options for the dash and doors. The seats are sporty black leather - though I suspect you could opt for lighter tones as well. The new Cayenne has reduced the bulk of the previous car, in form and function. So the dash looks slimmer, with excellent materials, finish and features. There is a new giant touchscreen at the central console. Below it - all the toggle switches and buttons have been replaced by backlit touchpads built into a glossy flat panel. They work well and offer force feedback, which is nice. It makes the control panel seem way more approachable than before. Of course its Porsche, so you're still probably better of reading the instruction manual since its not nearly as intuitive as many others! The displays are very sharp and the graphics very cool. 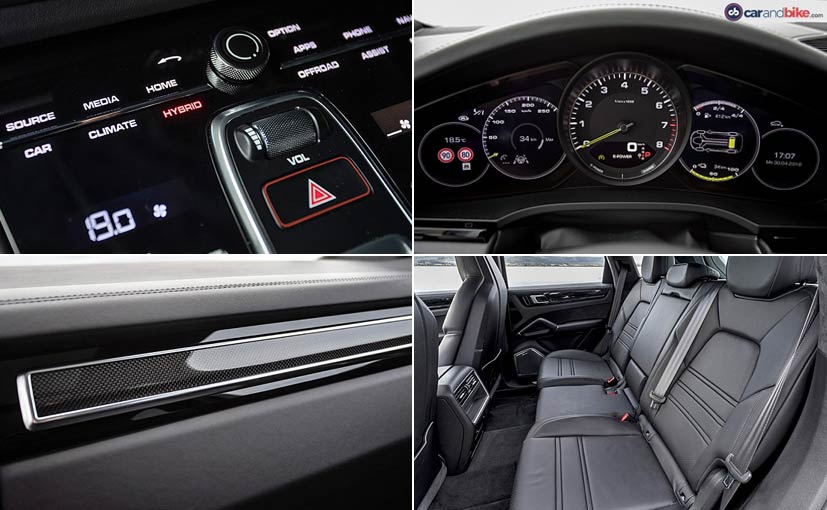 The navigation maps on the full screen also look great since the screen has an almost borderless interface. The gearshift is well designed and of course there's paddle shift on the very sleek steering wheel. The instrument cluster is part-analogue and part-virtual. The dials in the centre are the former, while on the sides you get two binnacles each that can offer you much information including the route map, state of charge and plenty more. Getting to it all requires some training as I said! The system also has CarPlay and now works with a smartphone app that lets you figure the car's parking location, battery/fuel status, ambient temperature, etc. You can remotely park or pull out the car using the said app - from a tight parking space or garage. There's plenty of legroom - front and back. And did I mention the front seats now have an optional massage function, besides seat warmers or cooling ventilation? 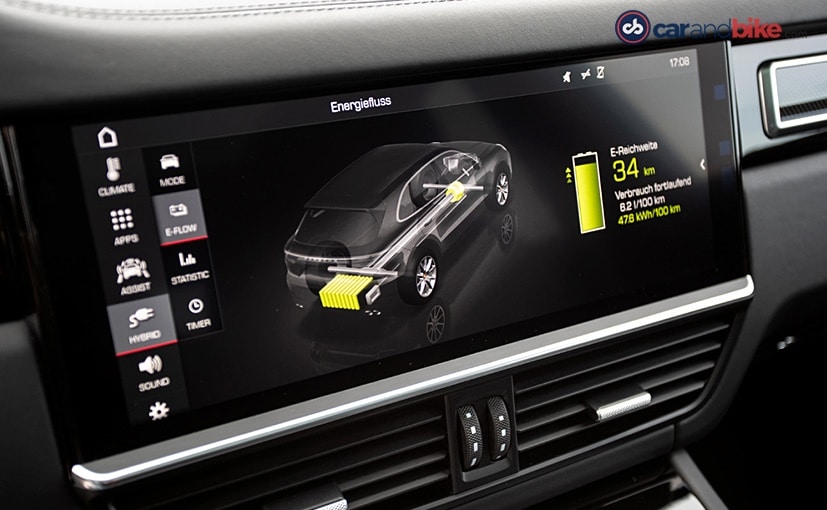 Other autonomous functions include the lane-keeping pilot, which I have to say was effective but a tad unnerving. It seemed to at times take the car from one end of the lane to another rather than keeping it firmly centred, as in the Volvos for instance. But it works, provided there are good lane markings on the road you're on! Active cruise control, collision warning, rear cross traffic alerts, panoramic sunroof and 360 camera views, Wi-Fi hotspots - yes the Cayenne E-Hybrid has a lot on board! The car also uses GPS to 'see' the road ahead and so offers optimally efficient gear selection and throttle response based on the terrain, traffic and curvature of the road ahead. This happens real-time in Hybrid Auto mode to give you the greenest performance possible, especially when the car is in cruise control. The other grouse I had was that the navigation system on my test car decided to reboot itself 3 times over the course of the day. While it came back online soon enough, it meant having to reselect the destination and continue on the route. A bit annoying, but I am happy to put that down to a glitch on the given day. I did manage to get about 150 kms of driving over about 300 kms that we did in total. And can say I now know the car, and its hybrid system well. What I would like to do is test its dynamic capability to the fullest - on say a race track - and also take it offroad. Properly offroad i.e.! 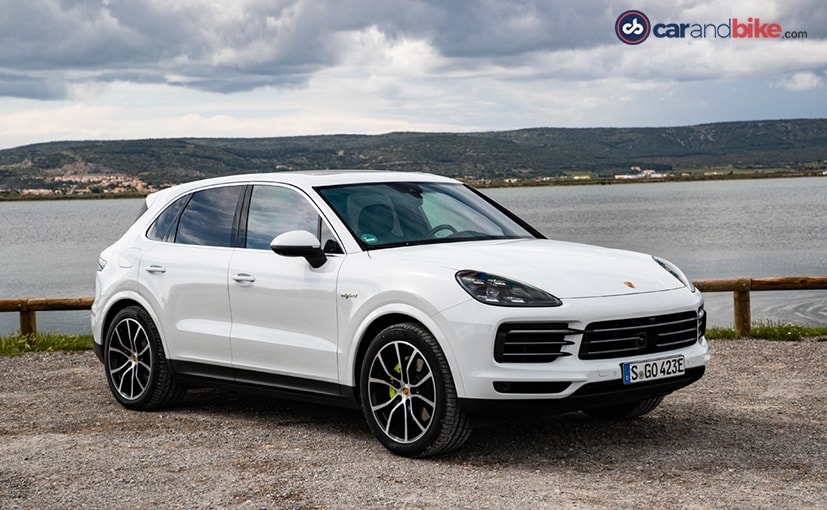 So assume for a second the E-Hybrid is priced in the same range as the diesel - would you then actively switch to the greener car? I would. The E-Hybrid also gives you much as standard, including Porsche's Sport Chrono package. You can add in a new head-up display, Bose or Burmester sound system, panoramic sunroof, air suspension, and really pamper yourself! In India, I know, it would mean having to install the charging infrastructure at either your home or office, but I am sure Porsche would do that for you - with costs bundled into the car's price. So yeah, think it over people! Now that Porsche has launched the Panamera E-Hybrid and has decided to bring us the Cayenne E-Hybrid, maybe its time to consider that over the Cayenne diesel (provided its not absurdly priced). Yes I am saying that. And I've always loved the diesel! Of course it would be just fantastic if our government would wake up and begin incentivising hybrids. We wouldn't then only be talking about plug-in Porsche Cayennes and Volvo XC90s, but even cars like the Civic or Swift. For now though I can't wait for the Cayenne India launch - that's expected around September this year.