The Kawasaki Ninja H2 SX is the sports tourer version of the Ninja H2 supercharged motorcycle and is only 18 kg heavier than the latter, while getting additional fairing and panniers, as well as a host of electronics. 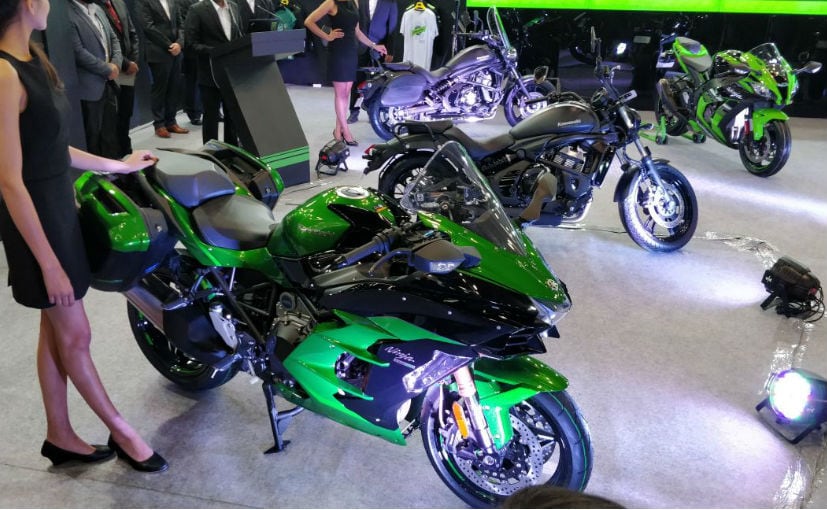 After making its global debut at EICMA last year, India Kawasaki Motor has launched the new Ninja H2 SX in the country at the Auto Expo 2018. The new Kawasaki Ninja H2 SX is available in two variants with the SX priced at ₹ 21.80 lakh and the high-spec H2 SX SE priced at ₹ 26.80 lakh (ex-showroom). The H2 SX is the sports tourer version based on the supercharged H2 motorcycle, and gets a host of changes in a bid to make the model ride-able for longer hours and more practical as well. It is also the more affordable version based on the Ninja H2 and will be sold in India via the CBU route.

The Kawasaki Ninja H2 SX gets the familiar styling but there are new bits as well including the new TFT LCD instrument display, cruise control, upgraded chassis with a longer wheelbase and an IMU as well. The supercharged sports tourer also gets the Kawasaki Cornering Management Function, two-way quickshifter, engine braking control launch control and traction control. The Ninja H2 SX SE also gets LED cornering lights. With the additional fairing and panniers, the new H2 SX only weighs 18 kg more than the H2. There's also a larger windscreen for better wind protection when touring.

Power comes from the same 998 cc in-line four-cylinder supercharged engine makes 199 bhp and 136 Nm of peak torque, and has been developed for everyday riding situations. The bike has been tuned for a stronger low and mid-range, as opposed to a higher power band seen on the H2 and H2R. The fuel efficiency has also improved on the Ninja H2 SX. Kawasaki has managed to make the new offering versatile for long distance riding, while also making it easy to manage at low speeds.

Apart from introducing the new Ninja H2 SX at the Auto Expo 2018, Kawasaki has also showcased the recently launched Vulcan S 650 cruiser, and has displayed the Z900, ZX-10R and the newly launched Versys X-300 asdventure tourer at the biennial event.