Ducati Monster Completes 25 Years: A Look At The Iconic Streetfighter Over The Years

We take a look at 25 years of the Ducati Monster's history - a bike which was the pioneer in the naked streetfighter segment as we know it today. 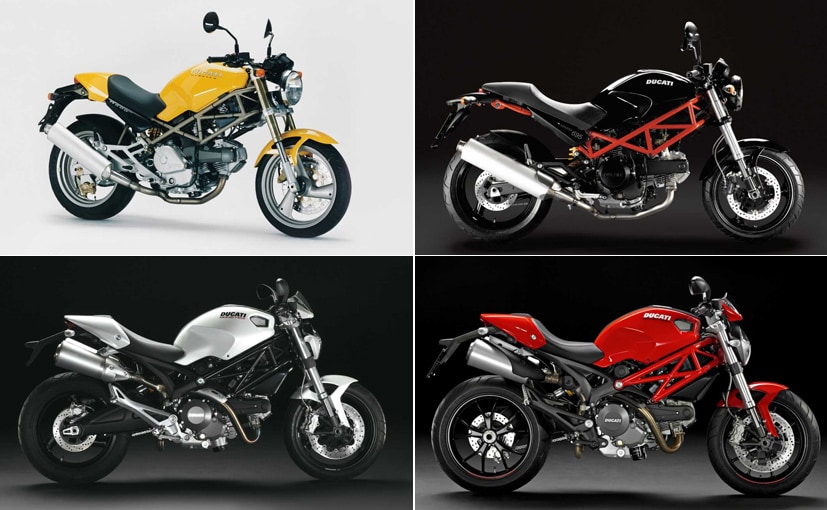 It's been twenty-five years since the first Ducati Monster rolled out of the Borgo Panigale factory in Bologna, Italy. The modern naked streetfighter category as we know it today, owes its origins to the Ducati Monster, and it's been a bike which not only spawned an entire new category of naked street bikes, but also saved Ducati from imminent bankruptcy. The Monster went on to become the single largest selling Ducati model and continued to lead the naked bike sector, and leaving a passionate community of fans and enthusiasts. Muscular looks, chiselled features, and characterised by the exposed engine and steel trellis frame, the Monster's design allowed for both structural efficiency and aesthetic appeal. By 2005, Monster sales accounted for half of Ducati's sales worldwide. Today, it still sells in large numbers, and the Monster is synonymous with the Ducati brand. Here's a look at 25 years of the Ducati Monster's evolution. 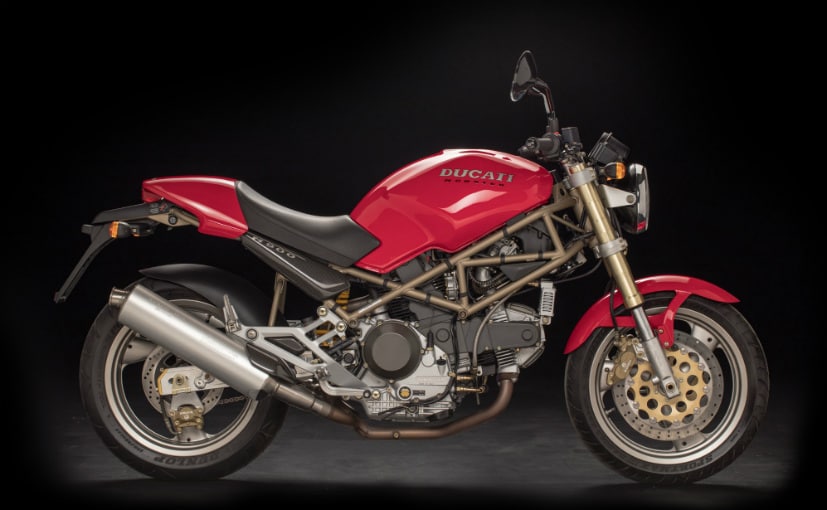 The first Ducati Monster, the Monster 900 was launched in 1993 and became an instant hit, among enthusiasts, stunt riders and created a loyal community worldwide. Designed by Miguel Galluzi, the first ever Monster was launched with a chassis borrowed from the Ducati 888 and an air-cooled 904 cc L-twin engine from the Ducati 900SS, tuned to make 67 bhp and 82 Nm. The Monster 900 had simple ergonomics with a flat handlebar and agile sportbike handling. The Monster 900 was a huge success but top notch components like upside down forks and Brembo brakes made it expensive for it to rake in the volumes. 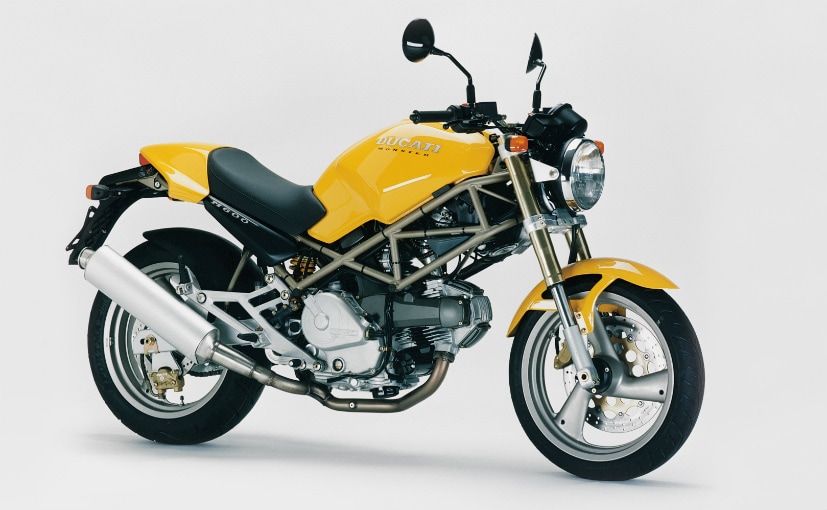 A year later, Ducati launched the Monster 600, or the Monsterino, as it's called in Italian. The Monster 600 had a smaller engine - a 584 cc, air-cooled L-twin motor which put out 51 bhp and 52 Nm of peak torque. It had cost efficient cycle parts and was not only lighter at 175 kg, but also had a lower seat height, making it accessible to riders of different build and height. The Monster 600 became a huge success and brought in a new range of customers into the Ducati fold.

The price difference between the Monster 900 and the Monster 600 left a significant gap to be filled, so in 1996, the Ducati Monster 750 was born. The bike got a bored out Monster 600 engine, which displaced 748 cc, and put out 62 bhp and 61 Nm of peak torque. But the Monster 750 didn't quite enjoy the popularity of its other siblings, and was perceived as a 'neither here, nor there' product. It continued to be on sale till 2003, and could attract only a limited number of buyers. 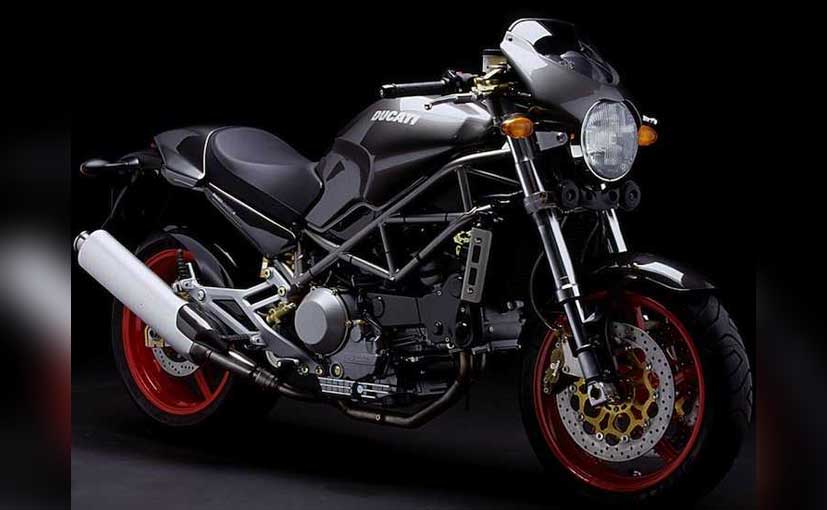 In 1998, Ducati refreshed the Monster 900 by bringing in two special editions - Dark and Chromo. The new models had some cosmetic changes, with black frames and tank; the Chromo edition was introduced with a reflective fuel tank. The same year, Ducati also introduced the Monster 900S, which introduced carbon side panels and fenders, as well as a flyscreen. The bike's front Showa suspension also got an upgrade, making it fully adjustable, while the rear Sachs unit got a performance improvement as well. The 900S shed 2 kg, tipping the scales at 183 kg and the 904 cc, air-cooled engine belted out 67 bhp at 7.000 rpm and 81 Nm of peak torque.

Two years later, Ducati introduced fuel injection to the Monster 900, giving it a new name as well - Monster 900ie. The fuel-injected version saw the power and torque output go up by 11 bhp and 2 Nm, but the bike also got heavier by 3 kg than the standard Monster 900. The 900ie also got the suspension set up from the 900S and a new digital instrument panel.

The first liquid-cooled Monster models were introduced in 2001, and at that time it was a controversial decision with purists scoffing at the move. The Ducati S4 got a retuned 916 cc engine which put out 101 bhp and 92 Nm, and the 4 denotes the four-valve configuration. In 2001, the S4 became the sportiest Monster but the liquid-cooling also involved a lot of cooling hoses which somewhat detracted from the traditional clean look of the Monster family. 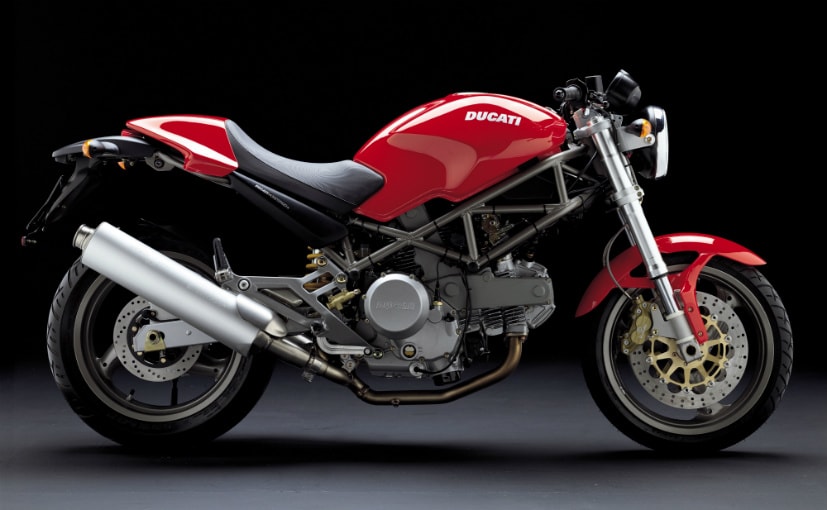 The Ducati Monster S4R was introduced in 2003 with a bigger 996 cc engine, which put out 113 bhp and 97 Nm of torque. The S4R also used a single sided swingarm and twin stacked exhausts. 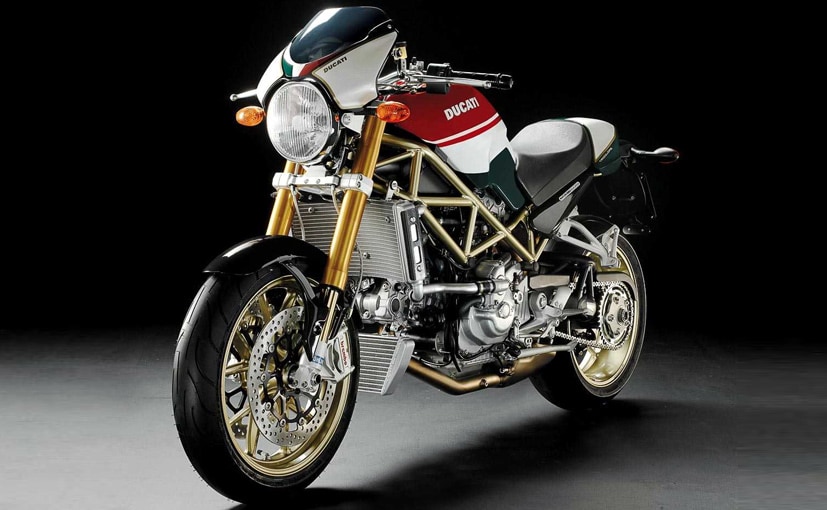 In 2005, Ducati introduced some styling changes for the air-cooled Monster range, by adding stacked pipes and the single-sided swingarm from the liquid-cooled models.

The same year, Ducati also introduced the S2R Desmodue in the Monster family, with the two-valve Desmodromic engine. The styling was similar to the four-valve S4R, but with the simpler two-valve motors from the S2R 800 and the S2R 1000 models. 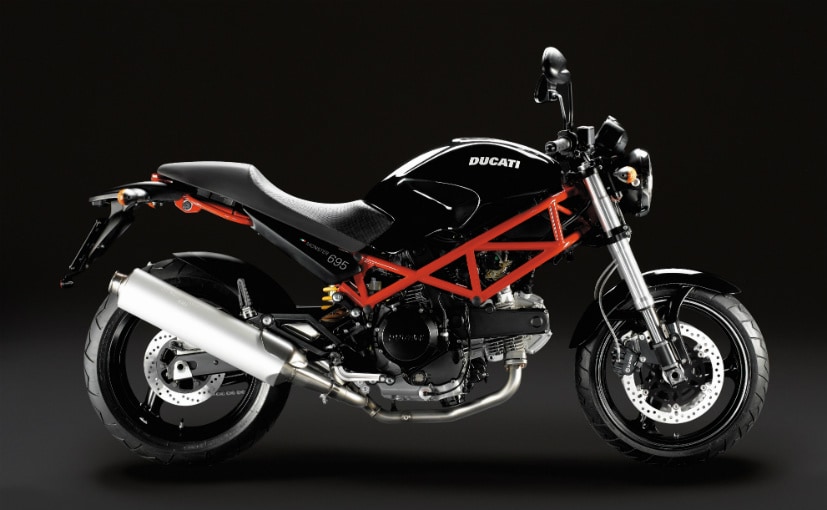 In 2007, Ducati introduced a top-of-the-line model in the Monster range, called the S4RS Testastretta. The new model used the engine from the 999 Superbike with Ohlins suspension front and rear, as well as radial front brakes. The S4RS had a 998 cc, liquid-cooled engine which put out 129 bhp at 9500 rpm and 104 Nm of peak torque at 10,600 rpm. With a kerb weight of just 177 kg, the S4RS became the most aggressive Monster to date, boasting of manic performance. 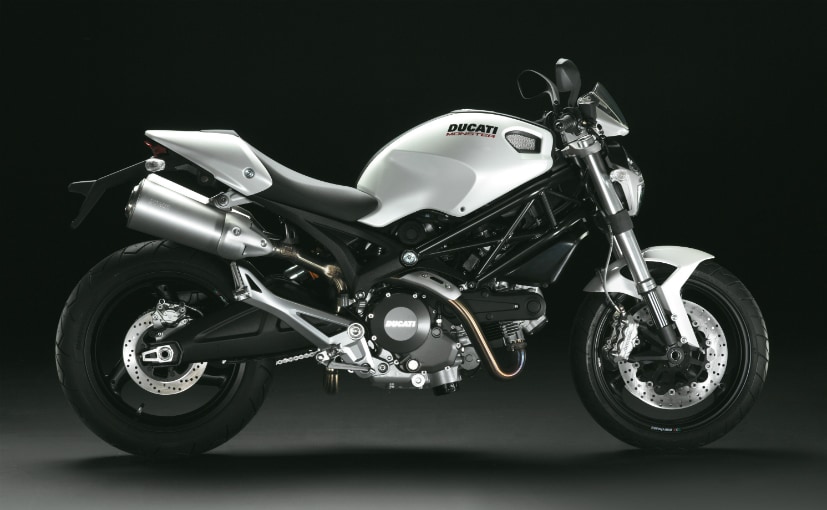 The year 2008 saw the first major re-design of the Monster range, which now sported underseat pipes. The entire Monster range was given a complete design upgrade with even the Monster 696 getting a sharper look and radial brakes. The flagship Monster was the Monster 1100, and a higher-spec 'S' version which came with Ohlins suspension.

In 2010, Ducati introduced the Monster 796, with a 795 specifically for Asian markets. The difference in the two models is that the 795 didn't get a single-sided swingarm, different spec tyres and also loses the rear seat cowl and instrument cowl. The 803 cc motor makes 88 bhp at 8250 rpm with 78 Nm of peak torque kicking in at 6250 rpm. With a dry weight of 167 kg, the Monster 796 was an easy enough motorcycle which was accessible to riders of different experience and skills. 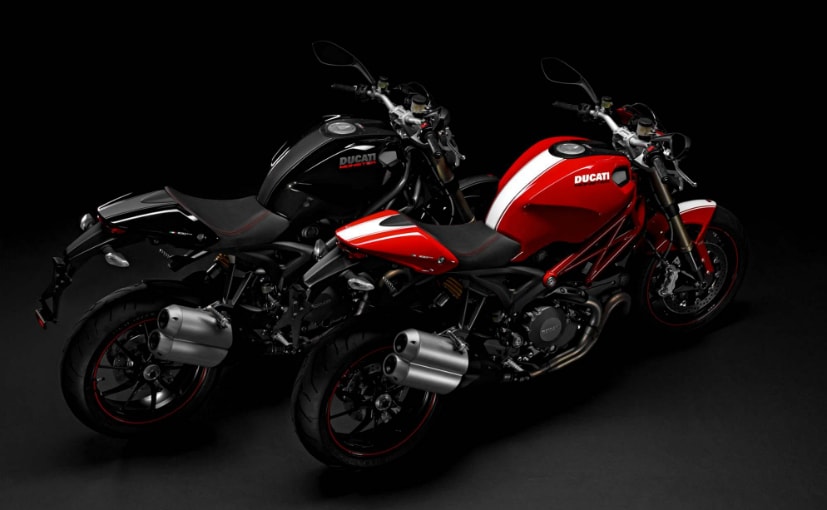 In 2014, Ducati introduced the latest generation Monster, which loses both the two-valve SOHC engine, as well as air-cooling. The Monster 1200 is powered by a 1198 cc, liquid-cooled, Testastretta 11-degree engine which belts out 135 bhp at 8750 rpm and peak torque of 117 Nm at 7250 rpm. The Monster 1200 got the very latest technology, including ride-by-wire and a full electronics package. 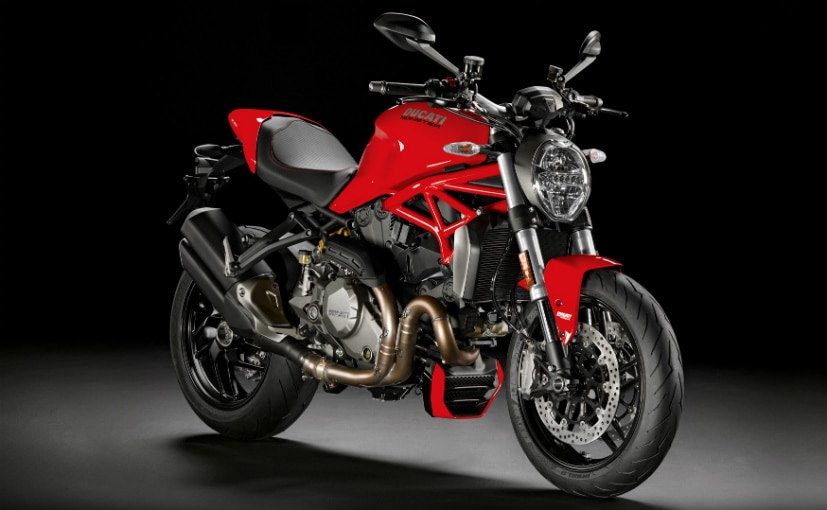 In 2016, Ducati launched the most powerful Monster to date, with the all-new Monster 1200R. With the 1198 cc, L-twin belting out 152 bhp at 9250 and 131 Nm at 7750 rpm, the new Monster 1200R makes more than twice the power of the original Monster 900. With a full TFT instrument panel, riding modes, Bosch ABS system, and Ducati Traction Control, the Monster 1200R pushes the envelope of the Ducati Monster to become one of the most sophisticated and powerful modern street nakeds.

The year later, Ducati decided to go back to the drawing board to include new and comparatively inexperienced riders into the Monster family with the new Ducati Monster 797. With an engine borrowed from the Ducati Scrambler, the Monster 797's 803 cc, L-twin motor puts out 72 bhp and 67 Nm. In terms of riding aids, it just gets the basic ABS, so no traction control, and no riding modes, but you get a fairly decent, inimitable Monster which is easily accessible, even to riders with little experience, or beginners.