Here's how prices of the newly launched Hyundai Venue stacks up against the likes of the Maruti Suzuki Vitara Brezza, Mahindra XUV300, Tata Nexon and the Ford EcoSport in the hotly contested subcompact SUV space. 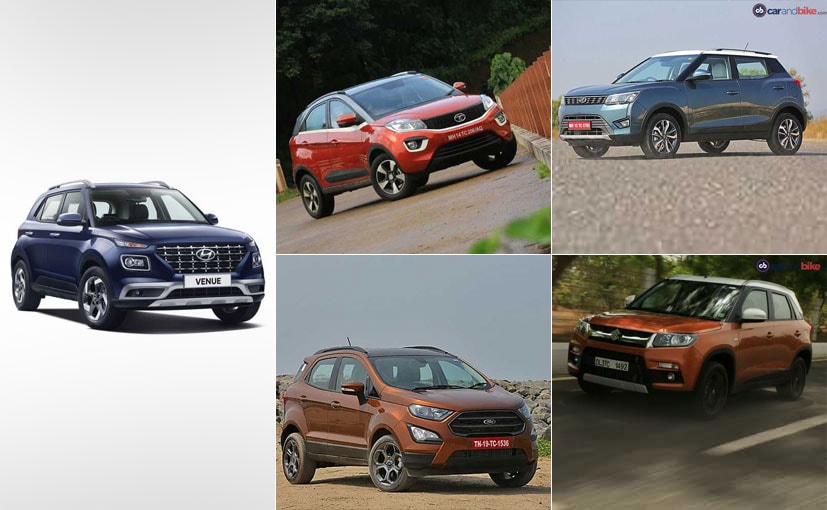 The Hyundai Venue has been finally launched in India bringing more excitement in the hotly contested subcompact SUV segment. Now, this space has some established rivals including the Maruti Suzuki Vitara Brezza, Mahindra XUV300, Tata Nexon and the Ford Ecosport, all of which are capable offerings in their own right. However, as India's first connected car, the Venue is a attractively priced and is feature-laden as well against most of its rivals. The SUV is offered with a 1.0-litre turbo petrol, 1.2-litre petrol and 1.4-litre diesel engines, while the transmission includes manual and automatic options. Now, the prices on the Venue are introductory and will eventually go up, but until then, the competitive pricing will help the SUV into its rival's market share. So, how does it hold up on the pricing against competition? We take a look.

Barring the Vitara Brezza that does not have a diesel engine on offer (Although, it is being readied for a January 2020 launch), all other offerings in this space get a petrol motor under the hood. A 1.2-litre unit is standard to meet the taxation norms, whereas Ford and Hyundai are also offering the 1.0-litre turbocharged motor. The Hyundai Venue manages to undercut the competition starting at ₹ 6.50 lakh, which makes it substantially more affordable than its closest rivals. That said, the Tata Nexon still remains the most affordable offering here priced at ₹ 6.48 lakh. The XUV300 turns out to be the most expensive at ₹ 7.90 lakh, while the EcoSport is about ₹ 7000 cheaper.

The Tata Nexon maintains its pricing advantage on the mid and top variants and manages to undercut most rivals. The Venue and the Nexon are priced identically for the mid-level trims, but the Nexon remains largely better priced on the top variants. The Mahindra XUV300 is the most expensive SUV in the top variants, while the Venue and EcoSport have an identical pricing.

The Venue's biggest rival is the segment-leader Maruti Suzuki Vitara Brezza and the model continues to maintain its pricing advantage across all variants over the Hyundai offering. The Vitara Brezza also gets a smaller 1.3-litre diesel, while the Hyundai Venue is powered by a 1.4-litre diesel engine. The XUV300 and the EcoSport use larger 1.5-litre engines. The Vitara is priced from ₹ 7.67 lakh, while the Venue starts at ₹ 7.75 lakh. The Tata Nexon remains the most attractively priced subcompact diesel SUV starting at ₹ 7.49 lakh, while topping out ₹ 10.20 lakh for the dual-tone version. The XUV300 and the EcoSport turn out to be substantially more expensive with the top variants over a lakh more expensive than the Venue's.

The Hyundai Venue gets the option of a DCT on the 1.0-litre petrol variant, and competes directly with the Ford EcoSport petrol automatic that is pricier by ₹ 41,000. Unlike the Ford and Hyundai offerings, the Tata Nexon that uses an AMT unit commands a much cheaper entry-price on the XMA trim at ₹ 7.84 lakh before topping out a ₹ 9.74 lakh. In the diesel versions, the Vitara Brezza AMT is priced more competitively over the Nexon diesel AMT, while the XUV300, Venue and the EcoSport do not get the feature altogether.