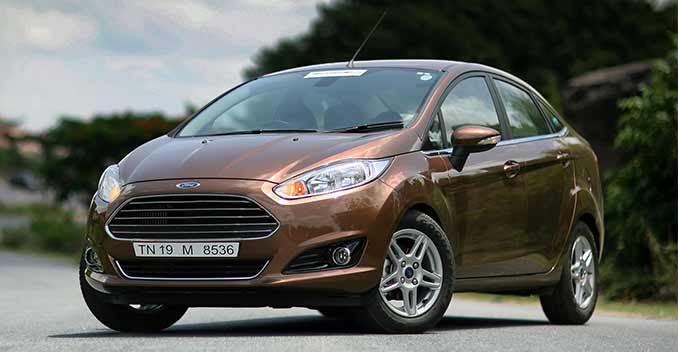 First showcased at the 2014 Indian Auto Expo in February, the Ford Fiesta facelift has been finally rolled out in the country. The company has discontinued the petrol version of the car and launched it in three diesel variants instead - Ambiente, Trend and Titanium, priced at Rs 7,69,000, 8,55,720 and Rs 9,29,449, respectively.

With both, design and feature updates, the new Ford Fiesta surely becomes a slightly more up-market product this time. Compared to the discontinued model, the prices have come down a notch. Delving into details, the most noticeable change is to its front fascia, which now features a new family grille, revised bumper and repositioned fog lamps. The rear receives a new bumper along with revised tail lamps. The side profile, however, remains unchanged.

There are a few changes inside the cabin as well. With new black-beige colour dashboard and the gloss-black plastic on the centre console, the updated Fiesta definitely looks better. However, the overall design of the interiors remain unchanged.

Powering the 2014 Ford Fiesta is a 1.5-litre diesel engine that churns out a maximum power output of 90bhp. Though the same engine also powered the discontinued model, Ford claims that it returns a an improved mileage this time.

Against the exiting model's 23.5Km/l, the new model returns 25.1Km/l, which makes it the second most fuel efficient vehicle in its league after the Honda City.