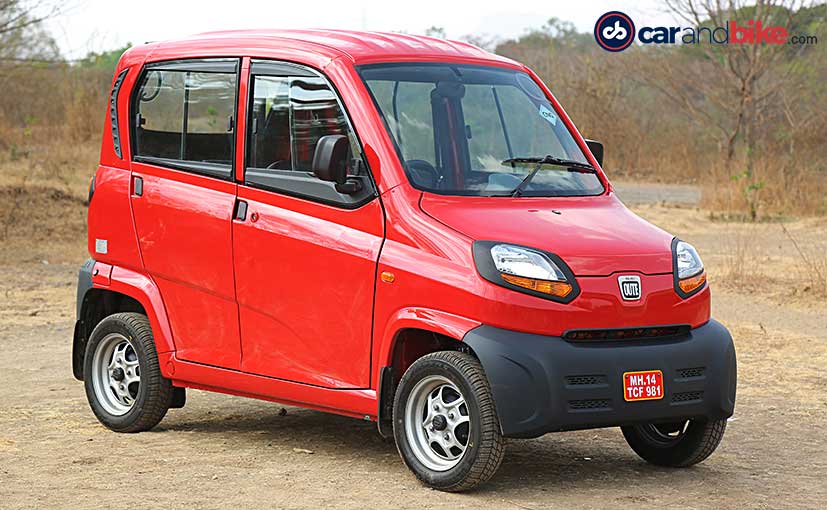 The Bajaj Qute has been around for some time now, first introduced at the Auto Expo 2012, and again unveiled in 2016 in production form. But until last year, the Qute was not road legal in India, simply because there was no classification or genre where it fitted into, and concerns about safety put the launch of the Bajaj Qute in the backburner. A period of time was spent by Bajaj Auto, battling the case for the Qute in courts, and finally, in 2018, the Ministry of Road Transport and Highways approved a new class of vehicles - the quadricycle. And that means, it can now be sold, and can be used, for both commercial and personal use. 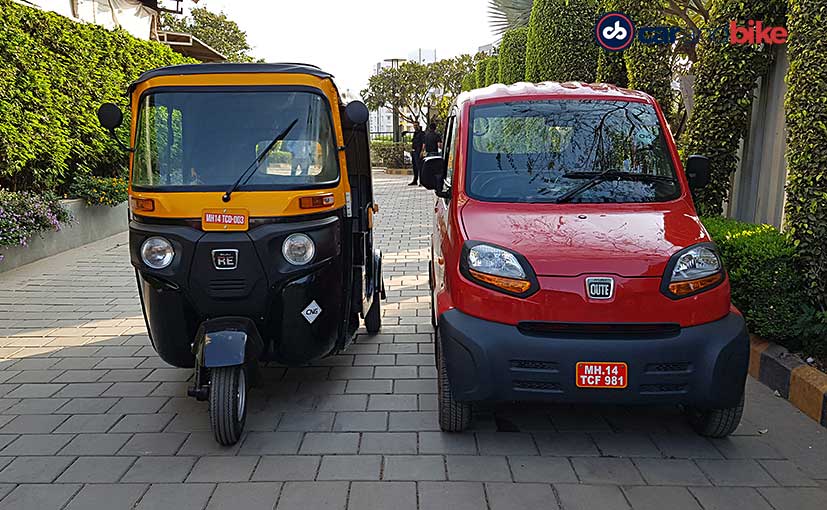 A quadricycle falls between a three-wheeler and an entry-level small car, and has small proportions

What is a quadricycle?

A quadricycle is a sort of vehicle which falls between a three-wheeler and a conventional small car. And according to the latest norms set up by the government, a quadricycle can be a small four-wheeled vehicle with a specific size and weight limit, as well as limited top speed. It can have a maximum speed of not more than 70 kmph, and has to be within certain proportions - 3000 mm in length, 1500 mm in width, and 2500 mm in height. The Qute, India's first quadricycle, meets all these norms; so it has a 2750 mm length, 1312 mm width, and a height of 1652 mm. So, visually, it's almost the same size as a three-wheeled auto rickshaw, only that it gets more protection, from the elements, as in its structure. 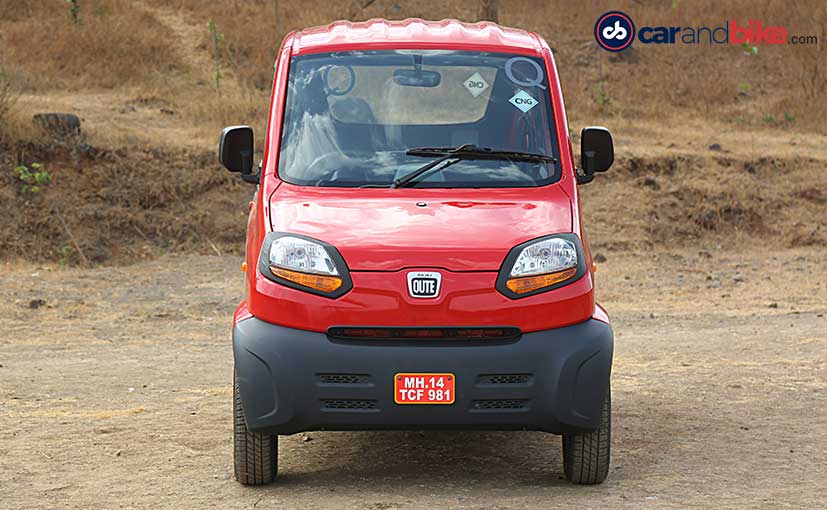 The Bajaj Qute is small, and although not very upmarket, it does look appealing, in its own way

In a word - cute! Ok, it's not conventionally good looking; it's not flashy, not exactly stylish, and may not have the design which will make it win accolades, but a headturner it certainly is. The Qute's overall construction over the monocoque chassis is more functional than something with aesthetic appeal. Quirky, is how it can be best described, but it's not necessarily a bad-looking vehicle and is available in bright colours giving it a somewhat 'toy car' appeal. The high roof, narrow body, and small 12-inch alloy wheels makes the Qute look like it's straight out of an animated movie, rather than a full-fledged, production four-wheeler. The body is made of sheet metal and plastic, with the roof and pillars made of steel, while the doors and the bonnet are made of plastic, ostensibly to meet the weight limitations of a quadricycle. 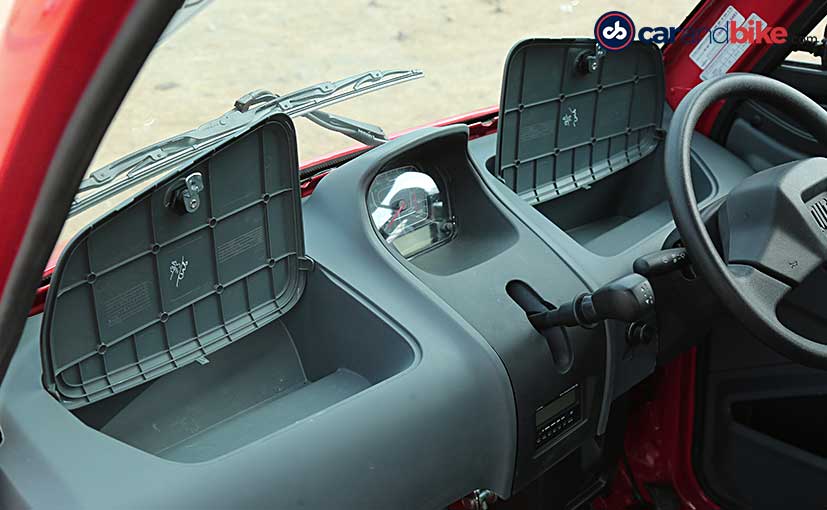 The Qute's cabin is basic and rudimentary, but it does the job of being a bare-bones people mover

Inside, it's basic, and rudimentary. On the features list, it doesn't have a long list - two lockable storage boxes on the dashboard, not unlike an autorickshaw's, and a large windshield with a single wiper, which gives a good view of the road ahead. The single-pod instrument console sits at the centre of the dashboard, with a large analogue speedometer, and a small digital screen which gives readouts for the fuel gauge, selected gear, odometer and time. 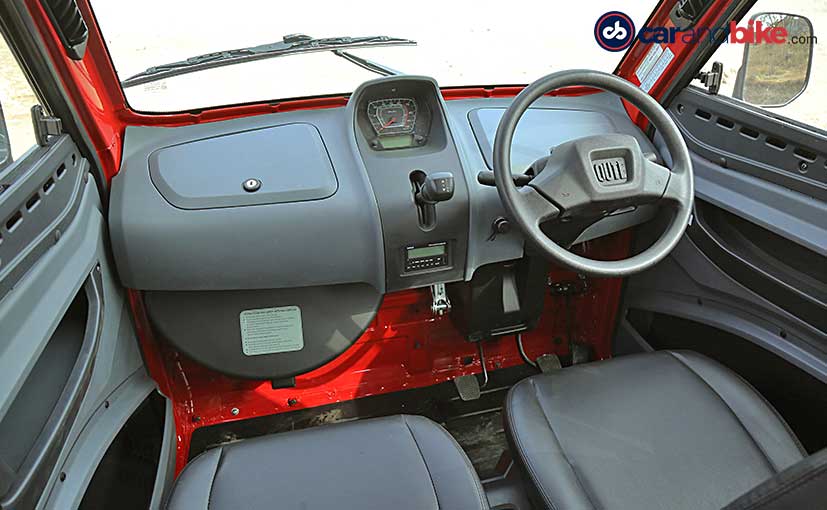 The Qute's interiors are definitely better than any autorickshaw, but not comparable to any car

There are no vents on the dash, so no air-conditioning, and no blower as well. For ventilation, you can open the sliding windows, and there's a row of small vertical vents on the a-pillars, which let in air from vents above the black plastic front bumper. The seats aren't reclinable, or adjustable, except for the driver's seat which can be slid from front to rear for drivers of different height. Autorickshaw drivers considering to upgrade to the Qute will find the interiors slightly better, but these are certainly not comparable to any car. 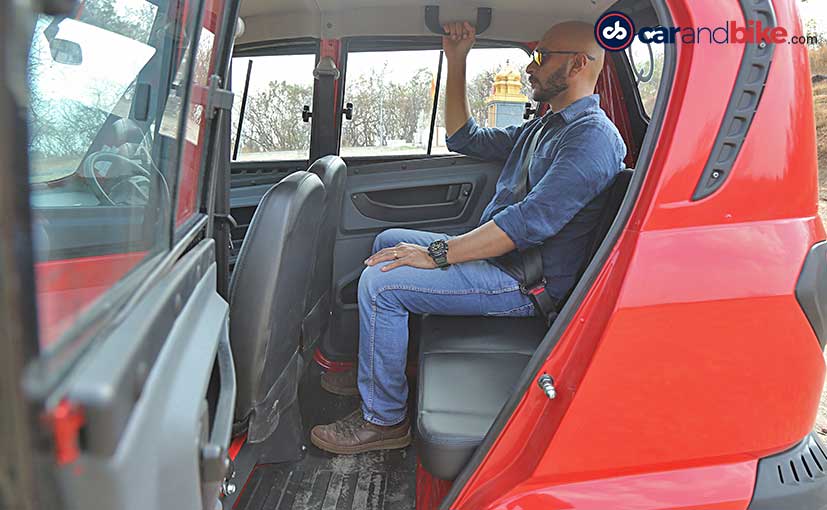 The Qute offers generous space to seat four adults, but seating five in the rear seat could be a squeeze

And as Bajaj officials have pointed out and reiterated again and again, the Qute is not a car, and neither does it try to be. It's positioned as a quadricycle for commuting within the city or small towns, and is built for the consumer who will be looking for functionality rather than luxury. The inside of the doors do offer generous storage space, and there is space to store up to 20 kg under the bonnet (it's a rear engine vehicle after all), and the rear seats can be folded down to make 400 litres of storage. But where it scores is in knee room and head room; despite its tiny dimensions the Qute is surprisingly spacious for four adults. 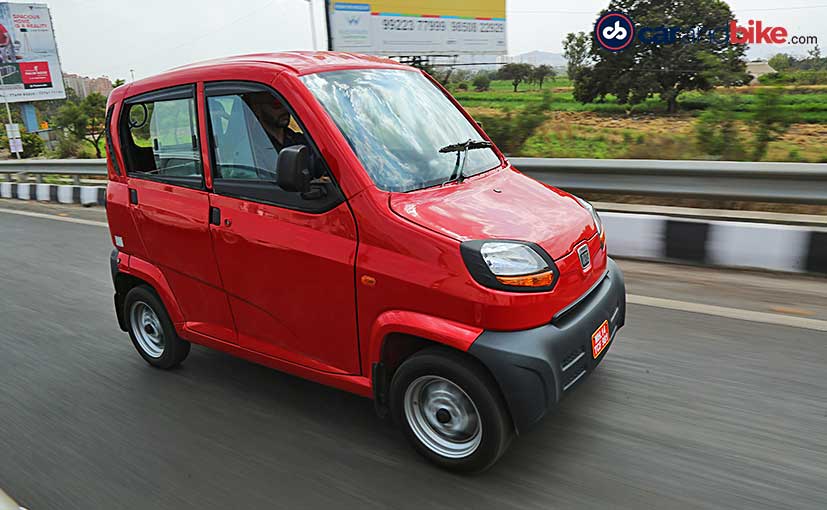 The Qute has a small engine, but it does the job decently within the city

The Bajaj Qute is powered by a 216 cc, single-cylinder, twin-spark engine which is available as a mono-fuel version. That means, you can either get it in petrol form, or CNG, not both. The petrol version puts out around 13 bhp at 5500 rpm and 18.9 Nm at 4,000 rpm. Bajaj reckons the CNG variant will be the bigger seller, and that's the variant which we drove. The CNG variant puts out just over 10 bhp of power and around 16 Nm of peak torque, and the engine is paired to a five-speed gearbox. Unlike cars, the Qute gets sequential shifting, just like a motorcycle, so you push the gear lever forward to shift up, and pull the gear lever down to downshift. Gears are precise though you can hear the five-speed transmission click into place. 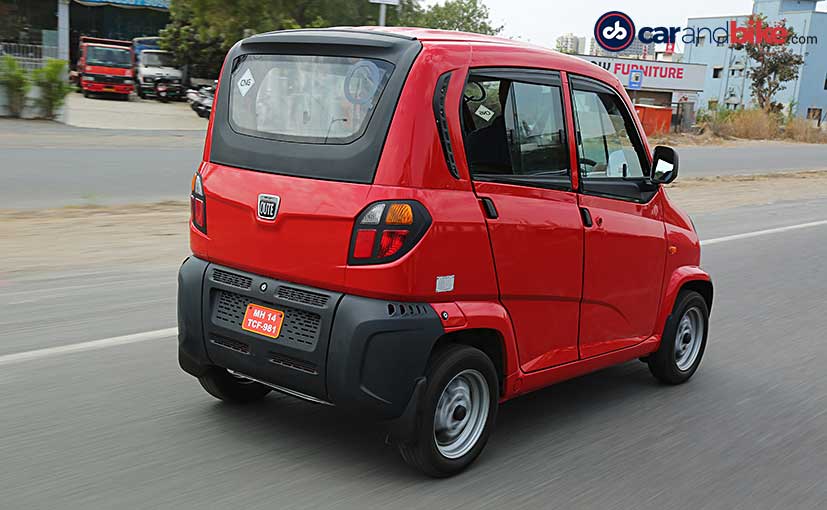 As long as you're not in a hurry to get anywhere, the Bajaj Qute can handle the commute pretty decently

And although the engine is small, comparable to a single-cylinder motorcycle's, the torque spread is nice and the Qute gets into momentum without any hiccups, and performance is definitely better than any autorickshaw's. After some time of prolonged driving, it's obvious that rather than working the gearbox, and revving the engine to draw power, the Qute revels in playing on the torque band. As long as you're not in a tearing hurry to get anywhere, the Qute does the job well of commuting with ease, and its small dimensions and sharp turning radius (3.5 m) ensures it's a delight to take sharp u-turns and park at tight spots. Top speed though is limited to 70 kmph, and the rev limiter kicks in alarmingly, even when accelerating through the gears. But ride quality and handling is a lot better than any three-wheeler. We tried our hand at an autorickshaw, and comparatively, the Qute is impressive, in handling, as well as ride. In fact, it can tackle a fair bit of broken terrain as well, and should be welcomed in rural areas. 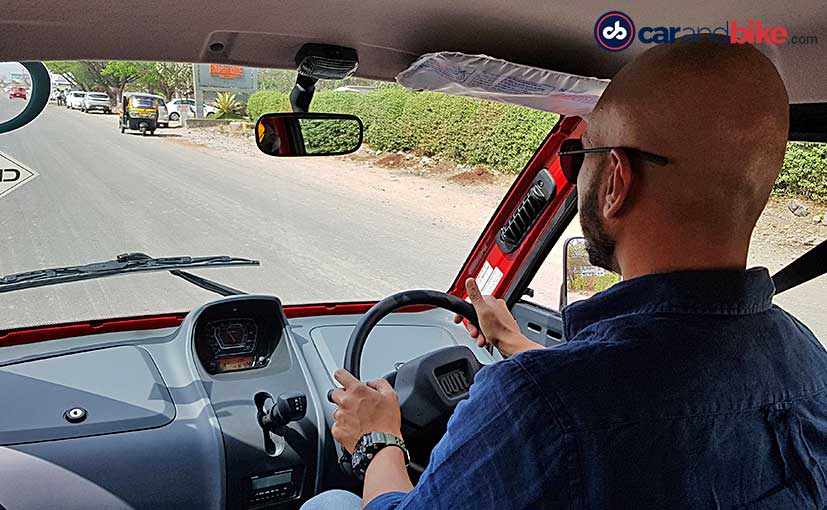 The Bajaj Qute is designed for low running costs, for those who find using a car a slightly expensive proposition to use daily, and with the corresponding maintenance costs. Bajaj claims the Qute returns 35 kmpl in the petrol variant, and 45 km per kg in the CNG variant. For the CNG variant, that works out to a running cost of under ₹ 1.5 per km, and that is even less than using a commuter motorcycle in the 125 cc- 150 cc segment. For three-wheeler autorickshaw drivers, the Qute offers the obvious upgrade, but it also makes a very good case for door-to-door sales people, e-commerce sales people, and small businessmen, who would like to use it as a means of transporting goods, or even as a family vehicle to travel within the city. 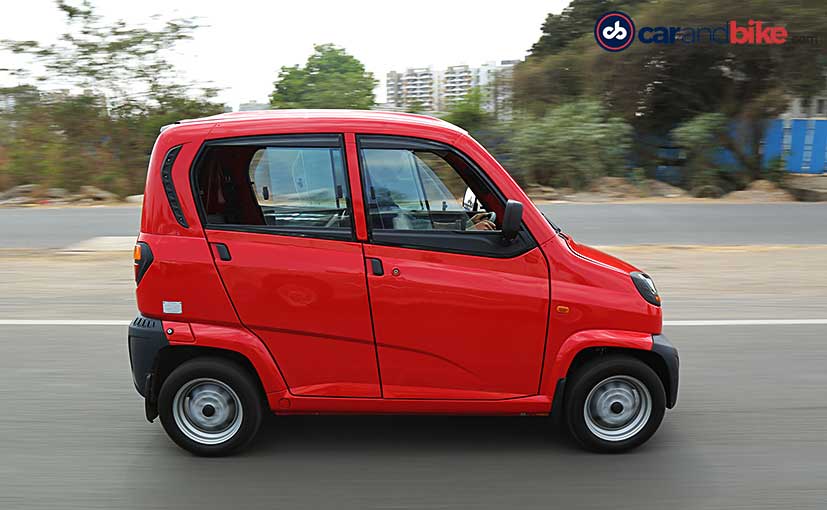 Sure, it's no car, and neither does it offer the luxuries, features or the performance of one, but purely as an intra-city mode of transport, it does make a strong case. It offers better weather protection, it's frugal to run, and most importantly, convenient to drive and use in crowded areas. But at ₹ 2.64 lakh (ex-showroom) for the petrol version, and ₹ 2.84 lakh (ex-showroom) for the CNG variant, it still may be considered expensive, considering it costs around a lakh more than the humble three-wheeled autorickshaw. At those prices, it comes close to entry level cars, or even a decently maintained used car, but from a running cost and maintenance cost perspective, the Bajaj Qute does offer a unique proposition. But it's early days yet to say, how commercially successful, or mass appealing the Qute will be, in the long run.