The Q4 Sportback e-tron has been unveiled and the company has announced that it will go into production in 2021 as a Coupe SUV. 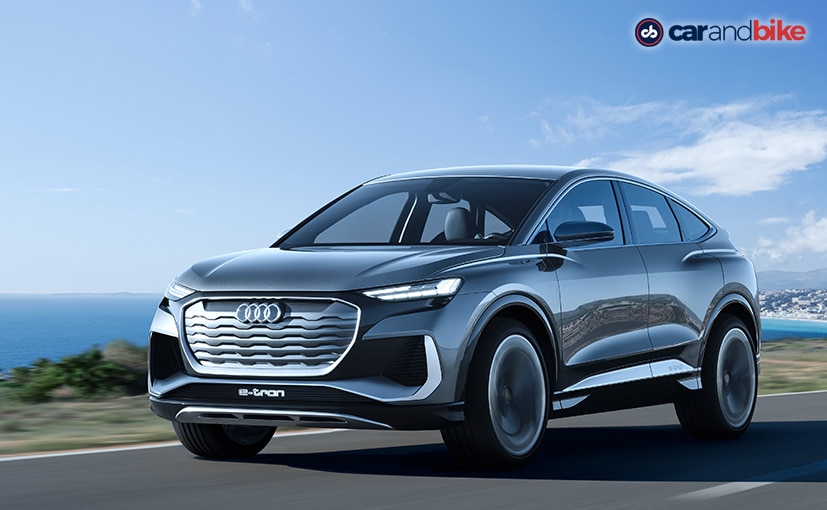 Audi presented the Q4 e-tron concept at the 2019 Geneva Motor Show and it gave us a taste of the company's first compact electric SUV. Now, however, Audi is presenting a second model of the product line and it's a Sportback version. The Q4 Sportback e-tron has been unveiled and the company has announced that it will go into production in 2021 as a Coupe SUV, a bodystyle that the company is very familiar with. Audi is giving its customers a headstart as far as the new electric car is concerned so that they'll be done deciding about buying the car when it finally is launched in 2021. Both the Q4 SUV and the Q4 e-Tron Sportback, boast of similar dimensions. It is 4600 mm long, 1600 mm high, 1900 mm wide and boasts of a wheelbase of 2770 mm. 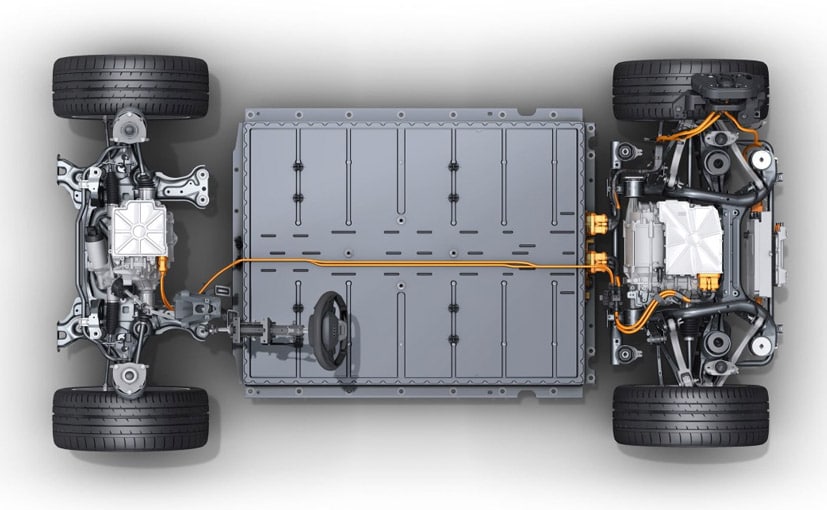 The Q4 e-tron comes gets two electric motors, one at the front and the other at the rear

Based on the Modular Electrification Platform (MEB), the Q4 e-tron Sportback will be available in two variants – 50 quattro and 55 quattro. Both these variants will be powered by the same 82 kilowatt hours battery pack and churn out the same power.  The modular electrification platform (MEB) offers a broad range of drive variants and power levels. The performance version of the electric drive is installed in the Audi Q4 Sportback e-tron concept. The front and rear axles are each powered by an electric motor and there is no mechanical connection between the axles. Instead, an electronic control ensures that the torque distribution is coordinated optimally, and it does so in fractions of a second.
If the driver demands more power than the rear electric motor can supply, the electric all-wheel drive uses the front asynchronous motor to redistribute the torque as required to the front axle. This also happens predictively even before slip occurs in icy conditions or when cornering fast, or if the car understeers or oversteers. 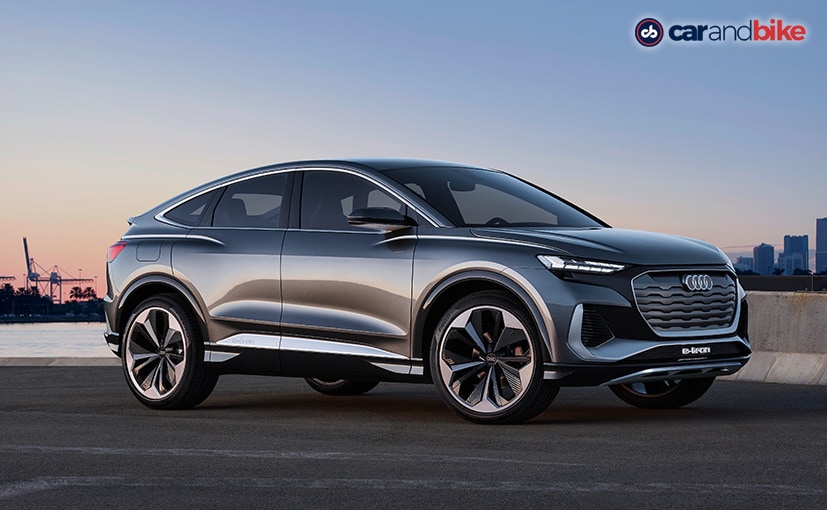 The electric motor in the rear end has an output of 201 bhp and a torque of 310 Nm. The front motor supplies the front wheels with up to 100 bhp and 150Nm. The total system output is 302 bhp.  It can do a 0-100 kmph sprint in just 6.3 seconds and top speed is restricted to 180 kmph. The battery in the vehicle floor stores 82 kilowatt hours, which allows for a range of more than 450 km. The battery is charged with a maximum of 125 kilowatts. It therefore takes little more than 30 minutes to reach 80 percent of the total capacity. The compact electric product line also features a sophisticated recuperation strategy, leaving out no possibility for optimizing its range. The complex thermal management of the drive and battery, which involves a CO2 heat pump, also contributes to this.
The battery system weighs 510 kilograms and Audi has been able to match the center of gravity of the Audi Q4 Sportback e-tron concept to that of a sedan with a conventional drive system. Axle load distribution is perfectly balanced at almost 50:50. The front wheels of the Q4 Sportback e-tron concept are guided on a MacPherson axle with adaptive dampers. In the rear, there is a multi-link axle with separate springs and adaptive dampers. 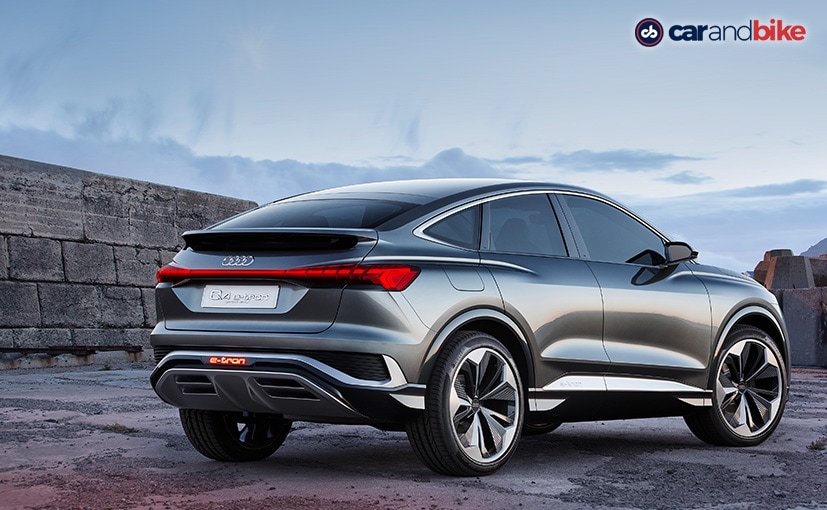 But enough about the mechanicals, let's talk about how sexy it looks. The silhouette of the Sportback slopes downward to the back in a subtle and dynamic curve. The roof line transitions into the significantly inclined D-pillars and ends in a horizontal spoiler at the level of the lower window edge. As a result, the future Audi Q4 Sportback appears much longer than the Q4 e-tron concept. The striking broad light band that connects the two lamp units on the rear end of the Audi Q4 Sportback e-tron concept was incorporated to reflect an element of the Audi Q4 e-tron concept. The striking design of the bumper diffuser unit with its horizontal slats and the illuminated e-tron logo in the middle is an element that the two Q4 versions share. 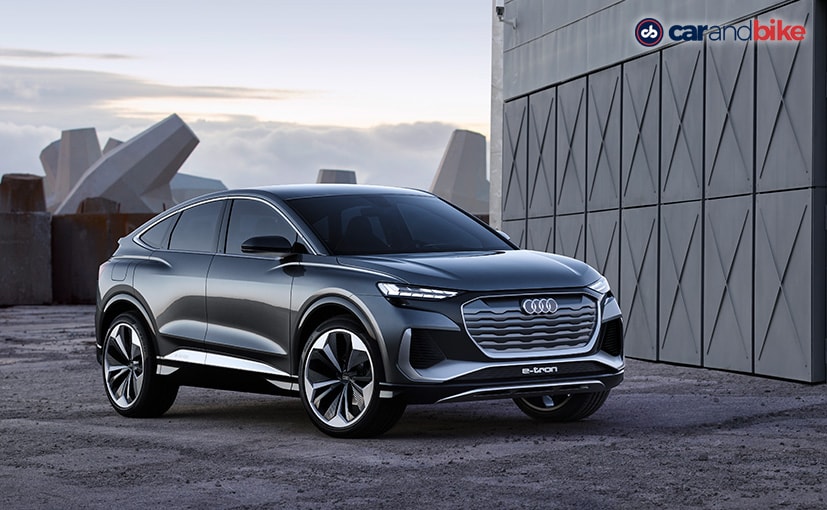 When looking at it from the front, the singleframe with the four rings brand logo identifies the Q4 Sportback e-tron concept as an Audi vehicle. And it will take no more than two glances to see that this is an electric Audi: Like the first production Audi with electric drive, the new concept vehicle also features a structured closed surface within a broad, almost upright octagonal frame in place of a traditional radiator grille. The prominently modeled fenders of all four wheels are a further classic Audi design feature that has distinguished the brand since the legendary original quattro 1980. The accentuation of the rocker panel area between the axles, where the battery and thus the powerhouse of this SUV is located, is a typical feature of the e-tron. Large 22-inch wheels give it poise and the cherry on the cake is the kinetic grey colour it comes in which makes it absolutely sexy 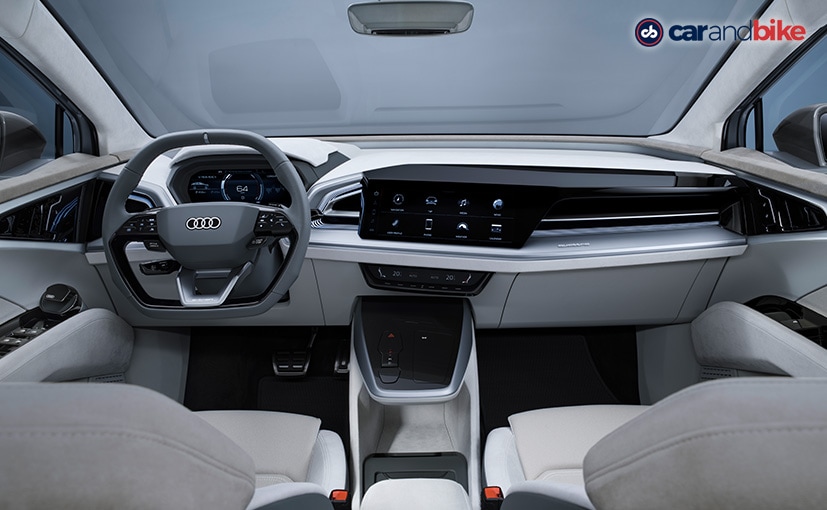 While light, warm colours dominate the upper section of the cabin, the dark carpet in the floor section provides a contrast

With a wheelbase of 2770 mm, the Q4 e-tron Sportback concept is spacious too. As there is no transmission tunnel restricting the space, the Q4 Sportback e-tron concept offers good leg room at the rear. The colour scheme emphasises the sense of spaciousness. While light, warm colours dominate the upper section of the cabin, the dark carpet in the floor section provides a contrast. The headlining, the window pillars and the upper section of the door rail and dash panel are fitted with white and beige microfiber textiles. 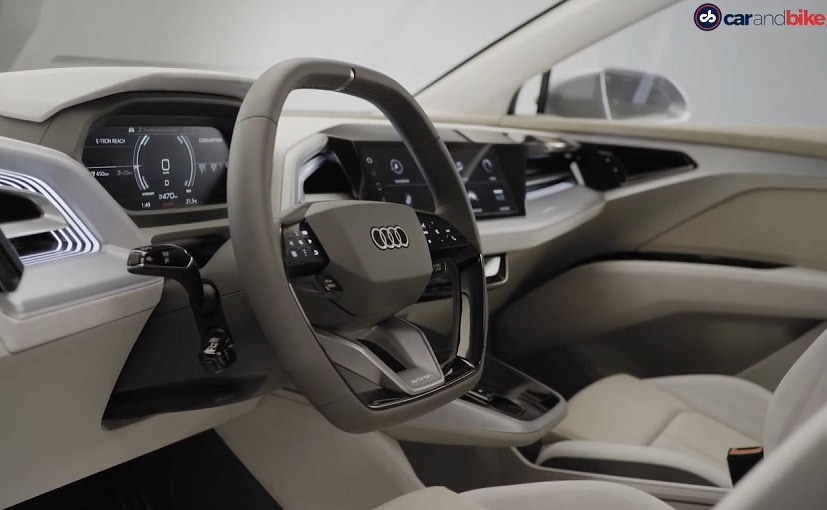 The floor covering is made of recycled materials. Instead of chrome-plated metal decor frames, the surfaces are covered with a high-quality multi-layer paint finish. The painted frosted Plexiglas on the applications creates an intensive depth effect. Four seats with integrated head restraints are upholstered with Alcantara. 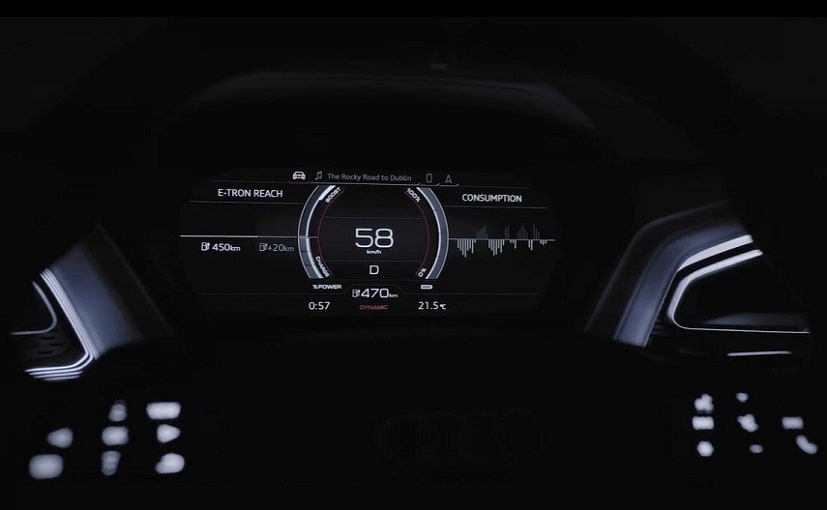 The Audi Q4 e-tron Sportback also comes with the virtual cockpit, which provides all the information you need

The Audi Q4 e-tron Sportback comes with the Audi virtual cockpit with displays like speed, charge level, and navigation. The large-format head-up display with an augmented reality function is a new feature. It can display important graphical information, such as directional arrows for turning, directly on the course of the road. 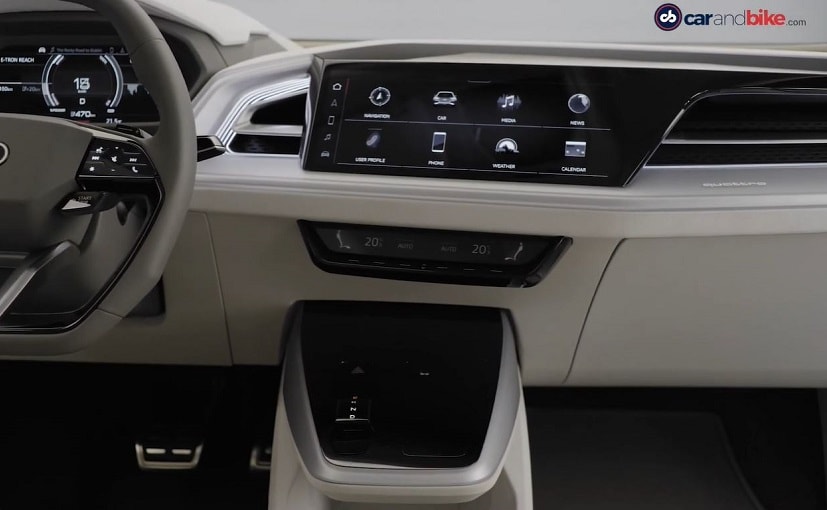 Dominating the centre console is a 12.3-inch touchscreen via which the infotainment and vehicle functions are displayed and operated. It is tilted toward the driver for greater ease of operation. As the centre console does not need to hold functional elements such as a gear lever or hand brake actuation elements, it is designed as a spacious stowage compartment that includes a cell phone charging cradle. 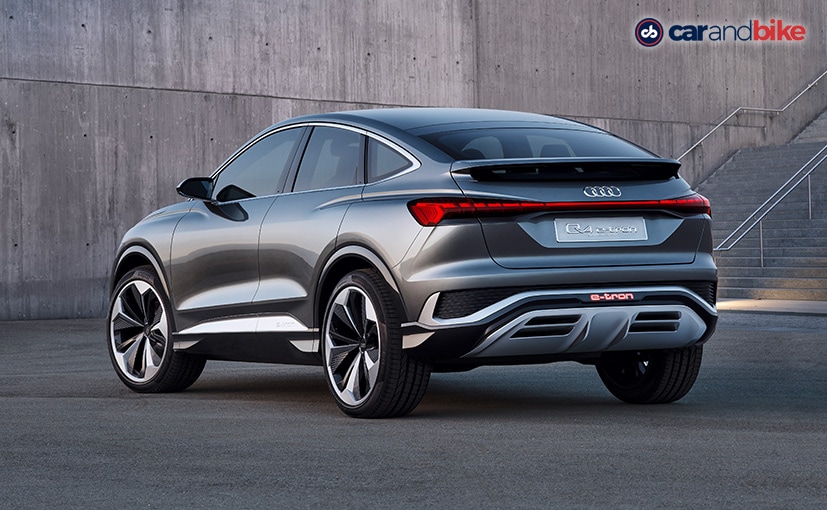 By 2025, Audi will offer more than 20 automobiles with all-electric drive in the most important markets worldwide and achieve roughly 40 percent of its sales with electrified models. The SUVs within this portfolio include the e-tron and the etron Sportback. In addition, there will be a range of models with classic body layout such as Avant and Sportback. While we wait for the e-tron to be launched in India, and for Audi to kick start its EV innings in the country, given the current trend of SUVs and coupe SUVs in the country, we will not be surprised to see the Q4 and Q4 e-tron Sportback in the country. That, however, will take time and we could expect it to come here by 2022. So let's wait and see what plans Audi India has for our markets.