Hero Xtreme 200R: All You Need To Know

The Hero Xtreme 200R is the brand's all-new premium motorcycle and here's all you need to know about the newly unveiled model.

View Photos
Prices for the Hero Xtreme 200R will be announced in April, 2018

The Hero Xtreme 200R is the newest flagship from the two-wheeler and has been finally revealed in all its glory. The model will be one of the showstoppers at the Hero pavilion at the upcoming 14th Auto Expo, while sales for the model will commence later in the year. The Xtreme 200R marks Hero MotoCorp's return to the premium motorcycle segment after a brief hiatus and the brand plans to attack a host of 200 cc motorcycles with its newest offering. The new 200 cc motorcycle then, is an important bike for the pre-dominantly commuter manufacturer and will be its first step into the world of premium offerings. 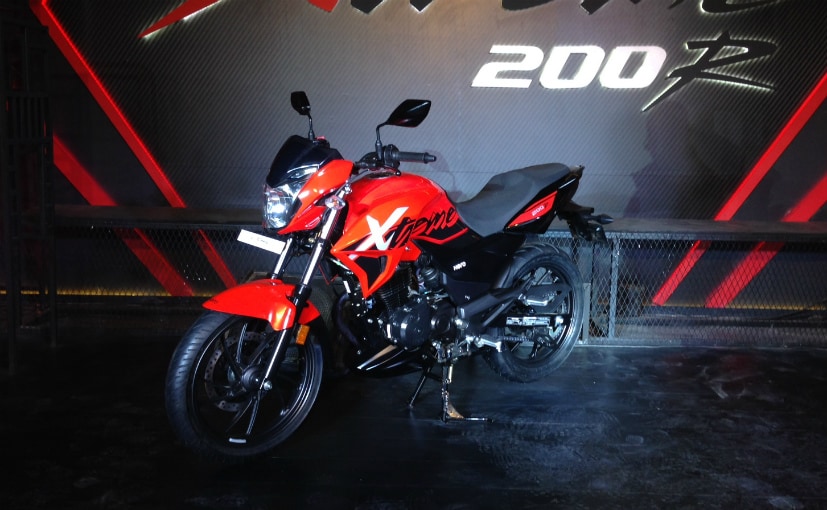 Here's all you need to about the new Hero Xtreme 200R:

1. The Hero Xtreme 200R started life as the Xtreme 200S and was first showcased at the 2016 Auto Expo. The production-spec model that has been unveiled stays true to the prototype carrying over most elements from the same. For a sporty positioning, the Xtreme 200 gets the 'R' suffix.

2. The Hero Xtreme 200R's styling is largely conservative and does not stray too far from the manufacturer's commuter motorcycles. Underpinned by a diamond chassis, the bike gets a conventional design with muscular elements like the muscular fuel tank with extensions and split grab rails. The blacked out and engine and exhaust create a nice contrast on the bike too. The step-up single-seat lends a split-seat look on the 200R, while the wheels get wavy alloys to complement the overall styling.

3. The headlamp cluster on the Xtreme 200R gets muscular treatment too and is equipped with LED position lamps. The taillight too gets the LED treatment, which is completely missed out for the indicators. 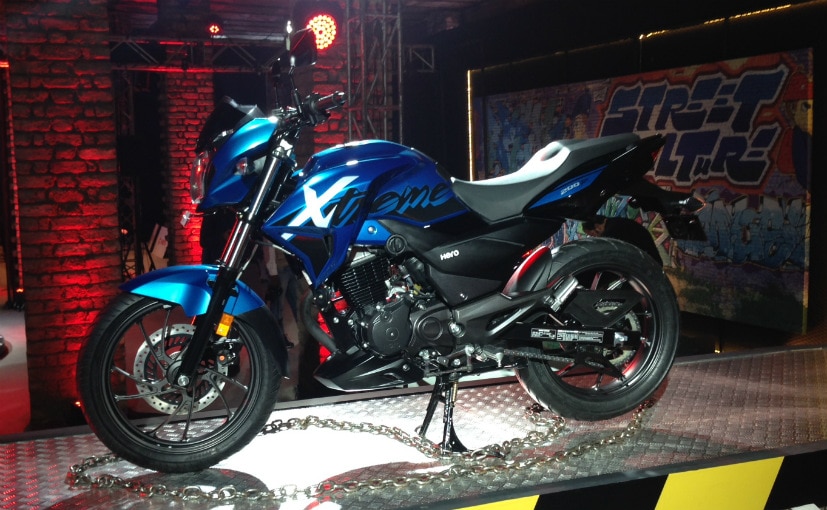 4. The instrument cluster on the Hero Xtreme 200R is an analog-digital unit. The console is similar to the one seen on the concept and gets a large tachometer on the left with a digital display on the right with a blue backlight. The tell tale indicators including the ABS, Neutral, battery and other located over the LCD display.

5. Ergonomically, Hero has designed the Xtreme 200R to offer a comfortable riding position. The bike gets a tall handlebar for an upright riding position while there are knee grips around the fuel tank. The slim seat has been contoured for a comfortable ride. The 790 mm seat height makes it accessible for riders of all sizes, while the 167 mm ground clearance also ensures you do not scrape the underbelly. 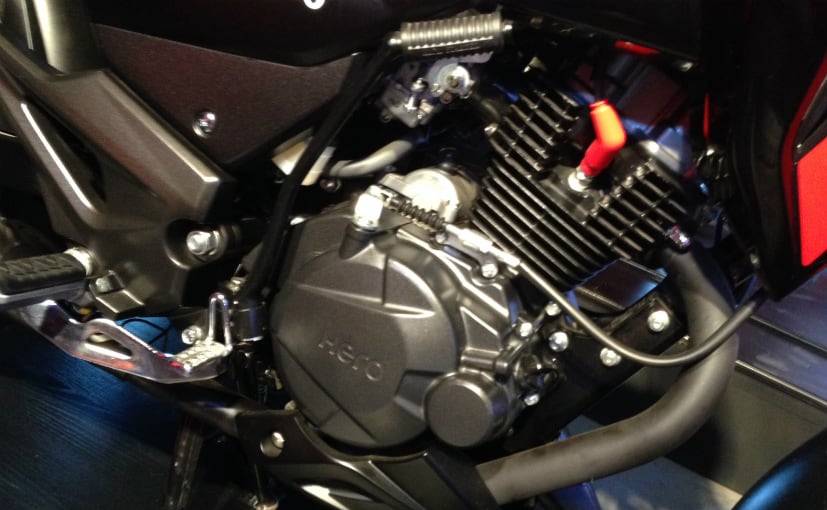 6. Power on the Hero Xtreme 200R comes from the new 199.6 cc, air-cooled engine. The single-cylinder unit has been tuned to produce 18 bhp at 8000 rpm and 17 Nm of peak torque at 6500 rpm. The motor is paired to a 5-speed gearbox and gets new balancer shafts to reduce vibrations, while torque has been targeted at the lower end of the power band. The new power mill is an upgraded version of the Achiever 150 and Hero claims the model can return a fuel efficiency of nearly 40 kmpl. The bike maker says it has also worked on the exhaust note by reducing the intake noise. 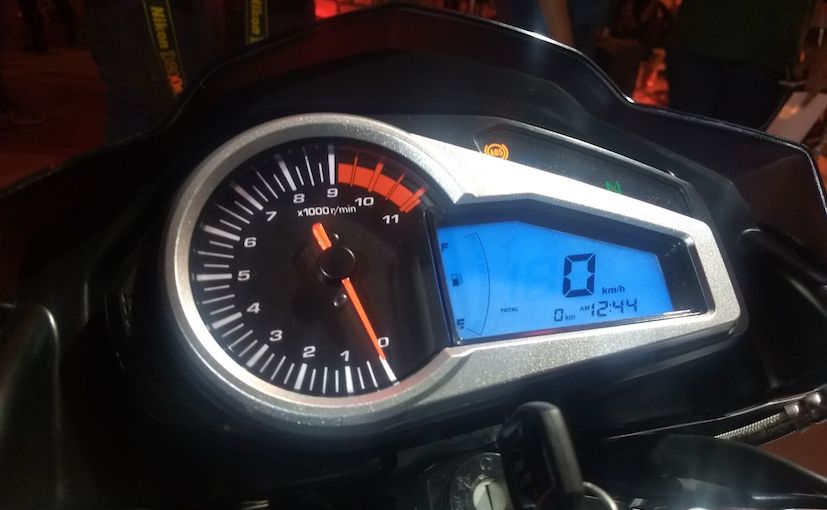 (The console on the Xtreme 200R looks simple and functional)

7. Suspension duties on the Xtreme 200R include 37 mm telescopic forks up front, while the rear sports an 8-speed adjustable monoshock setup.

8. The street-fighter uses a 276 mm front disc and a 220 mm rear disc brake setup for controlled stopping and the bike also comes with front Anti-Lock Brakes (ABS) as optional. 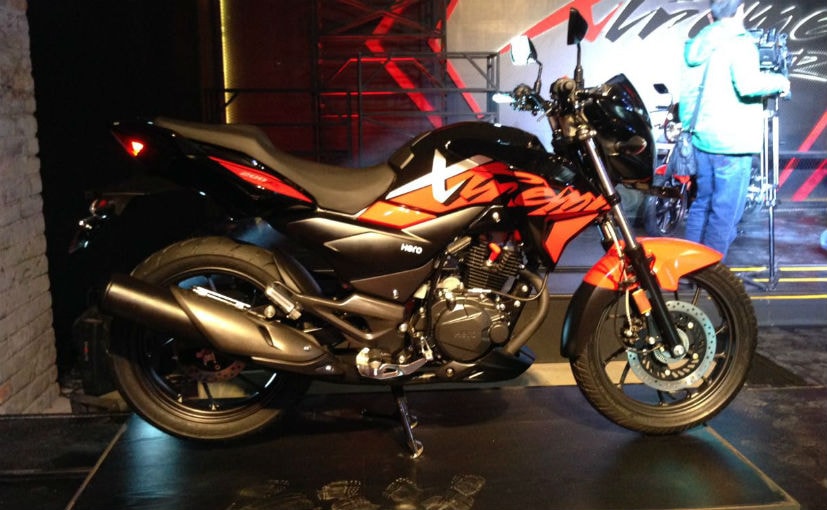 9. Doing a competition check, the Hero Xtreme 200R will be locking horns with the TVS Apache RTR 200 4V and the Bajaj Pulsar NS 200. The model will also lock horns with the Suzuki Gixxer that is sold at a similar price.

10. Hero MotoCorp has said that it will be announcing prices in April this year. Prices are expected to be in the vicinity of ₹ 80,000-85,000 (ex-showroom), which undercuts the competition by a decent margin. Deliveries for the new Xtreme 200R should commence towards the middle of the year.