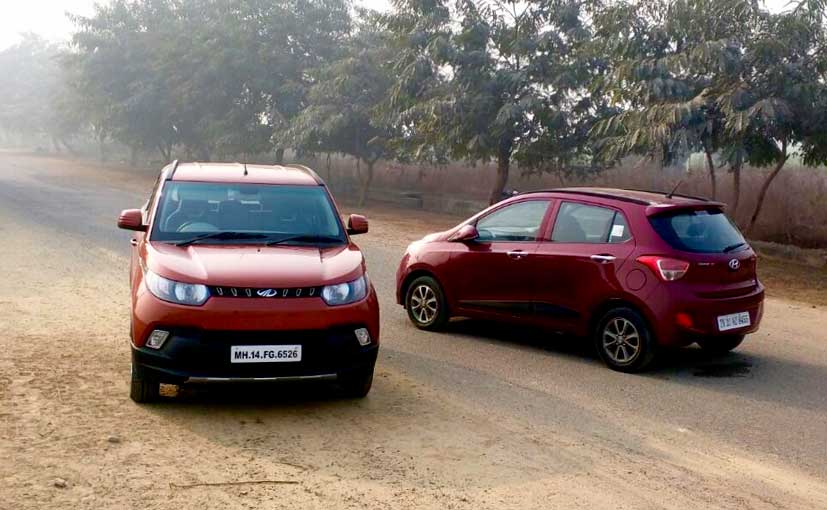 The Mahindra KUV100 is the car of the moment, and so right up front let me say it is indeed one of a kind. It is not a hatch that's gone 'cross', it's in fact the other way around! When you put the KUV100 and the Hyundai Grand i10 side by side, you can see why the Mahindra stands tall. Even though on ground clearance the two are only 5 mm apart. But that's the whole point from Mahindra. This is in fact an SUV styled hatchback, and not a true blue SUV.

The KUV100 is the best-finished Mahindra ever. The car has the looks to attract attention, and even manages to pack in some oomph courtesy the metal on the doors and the daytime running lights. But let's face it, like every recent Mahindra car it is overstyled and trying a bit too hard. The SUV look is complete though with the high riding bumpers and black cladding. The Grand i10 is boring - not just by comparison. At its launch, Hyundai had disappointed us by banking on safe looks on the Grand i10, at a time when its cars were all going flamboyantly fluidic. 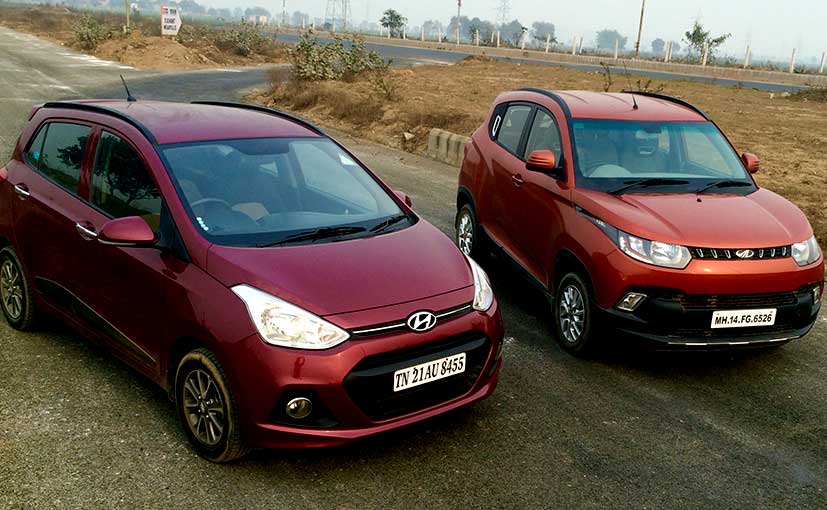 The Grand i10 has keyless entry and start on the top end, meaning the neat little remote key fob needn't ever come out of your pocket. The KUV100 has a remote, but a huge metal key makes the whole fob too big and a bit uncomfortable! No start-stop button either by the way.

The thing that really got me interested in the KUV100 though is that Mahindra has gone the extra mile with new engines. The mFalcon range on board the car is a big step up for Mahindra. The company now shares these engine platforms with SsangYong, and has various iterations on both petrol and diesel at its disposal - details of which we shared with you in our KUV100 review. 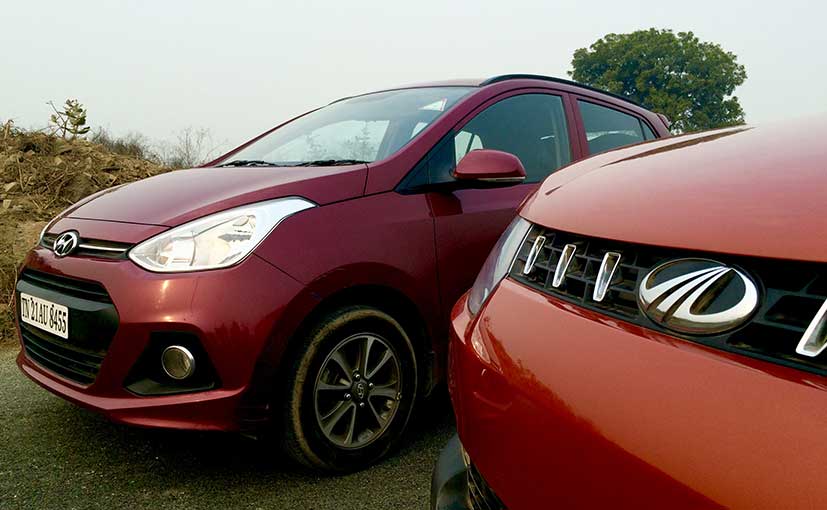 The diesel KUV is a touch more powerful than the Grand i10's U2 CRDi. While the latter is more refined, the KUV has a punchier feel. The mFalcon engine is a touch noisy though, but makes up by backing the grunt with great mid and low range torque. Both cars use 5 speed manual gearboxes. 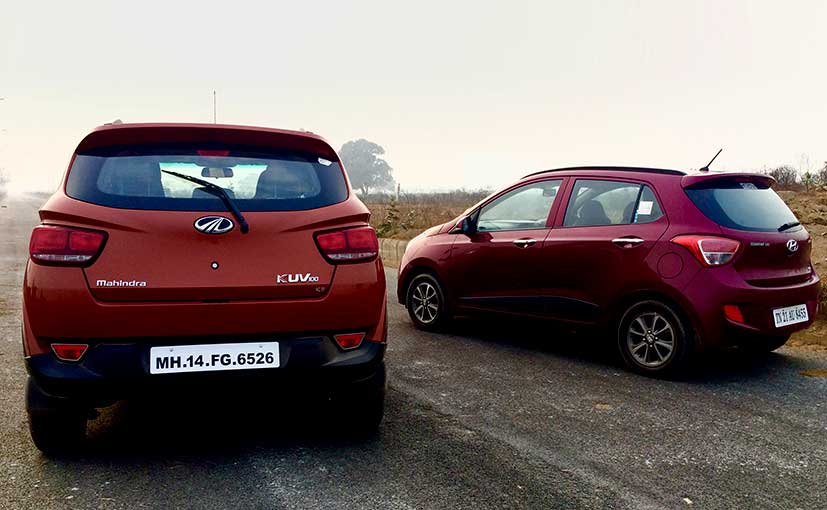 The petrol motor is the real change for Mahindra though -its first indigenously built one at that. And it has done well. The petrol is not only good on power delivery, but also has a nice growl to it's not usually associated with hatches. The Grand i10 is stronger on the petrol side though with overall smoother and more refined performance - and the gearbox is mated very well to the car, making changes very smooth. There is an automatic option on the Grand i10, and Mahindra is considering an AMT on the KUV100 that it doesn't currently offer.

On performance, the KUV100 surprises with its handling and ride quality. The car has a sportier feel than the Grand i10, but the Hyundai comes in with very nice ride quality that many buyers - especially those using a chauffeur will appreciate. The Mahindra has a more comfy rear seat though, and better ride height -and yes for what its worth offers 6-seater variants versus any other hatchback's 5 only configuration. 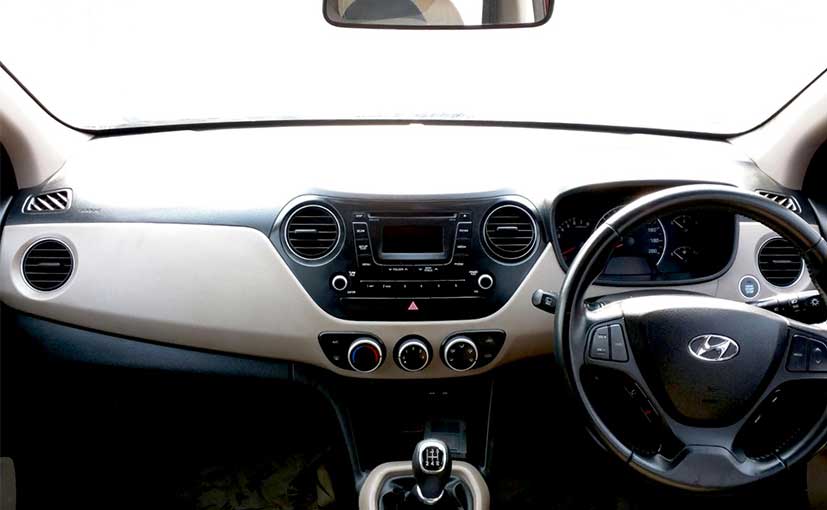 The Grand i10 has still got benchmark status like I said and its cabin is its real USP - which when it first arrived in 2013 was a real breath of fresh air. The layout of the dash, the inbuilt music system and the start stop button plus keyless entry were all a huge step up from the likes of the Swift.  That India got the extended wheelbase car also helped the cabin room. The KUV100 has a quirky interior too, with the best plastics and textures seen from Mahindra to date. The console looks a bit plain, but putting in the car's logo there covers up the blank space. The dash mounted gear stick has a short throw and is actually fun to use and combines well with the upright seating posture, making for a commanding driver view and position. But the car's pullout parking brake is archaic and a bit of a pain to disengage. The advantage on the KUV100 is the 6-seater configuration option - which means a bench seat up front. My grouse is that the middle passenger only gets a lap seatbelt and the airbag variant may not have a larger passenger airbag to cover both front passengers.

I do like the fact that the KUV100 offers ABS and EBD as standard and has the option of dual airbags in every variant. The Grand i10 offers both only as an option and only on the top trim variant Asta! Even the Swift now offers options across variants, so Hyundai needs to wake up on this. Finally a look at the prices, where Mahindra has clearly not only undercut the Grand i10, but has also done that by offering more features in some variants at the various price points. The fact that the K2, K4 and K6 also have those plus variants with airbags is also well, a big plus! So which car wins? The Grand i10 retains its benchmark in many ways - it is a no nonsense and practical car, and is very well finished in comparison to the newbie. But given the value and also the little quirkiness it brings to the party, as well as the prices and safety features, the Mahindra KUV100 noses ahead on this one - but only just.
0 Comments