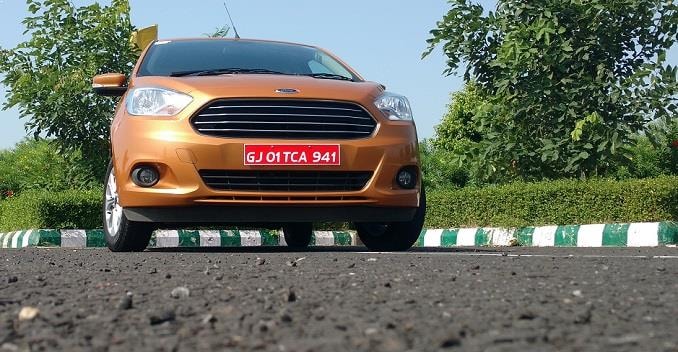 Despite the cut-throat competition in the hatchback space, the first-generation Ford Figo managed to find a commendable amount of buyers, especially in urban centres. The non-competitive maintenance cost along with the availability of a handful of better options in the space led to the fall of Figo the last time around, Ford India claims to have addressed some of the issues with the new-generation model. Save for the name, the new-generation model has nothing in common with the old one. It has an all-new design, features and, three completely new powertrains. With several class-leading features at a very competitive price, the new-generation Figo is here to challenge two of the best hatchbacks in the country - Maruti Suzuki Swift and Hyundai Grand i10.

While speaking to Ford officials about the company's plan-of-action to counter players like Maruti Suzuki and Hyundai on total cost of ownership/maintenance cost, they claimed that the maintenance cost of new-gen Figo will be about 15 to 20 percent less than most of its rivals. One such initiative includes 'Total Maintenance Plan' (TMP) which offers fixed maintenance cost for the next 3 years thus ensuring protection from inflation, and rise in costs of parts and labour. Interestingly, the service interval for the new Figo is 10,000Km, while that for its rivals is 5,000Km - this further ensures low cost of ownership. While all these plans sound good and genuine, changing people's perception about Ford will be a huge challenge. 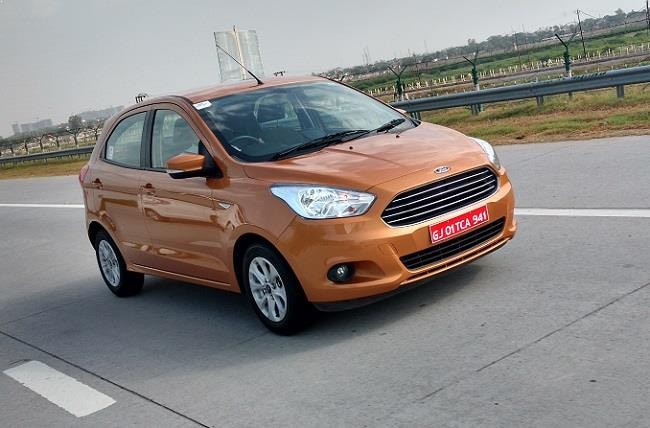 With that being said, everything indeed looks good - at least on paper; but does the new-gen Figo really have what it takes to become an important player in the hatchback space? I find out.

Like most hatchback and sub-compact siblings, the new-gen Ford Figo and Figo Aspire also look similar from the front. The new Figo features the same trapezoidal grille with four horizontal slats and the same set of sweptback head-lamps. 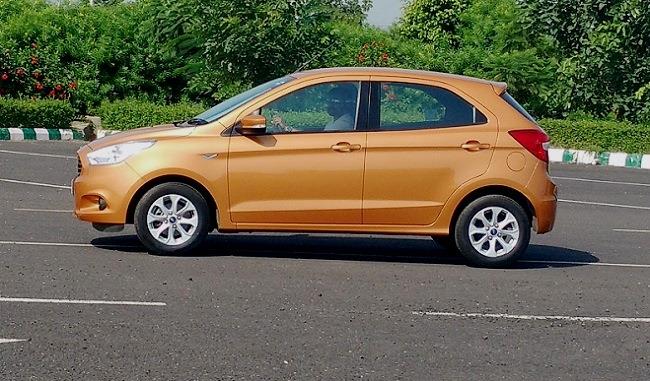 The side profile, too, looks similar till the rear wheel arch/B-pillar. The overall side profile looks quite proportioned as the roofline merges well into the tail. However, it's the car's rear profile that makes the real difference - it sports a hatch and wrap-around tail-lamps. 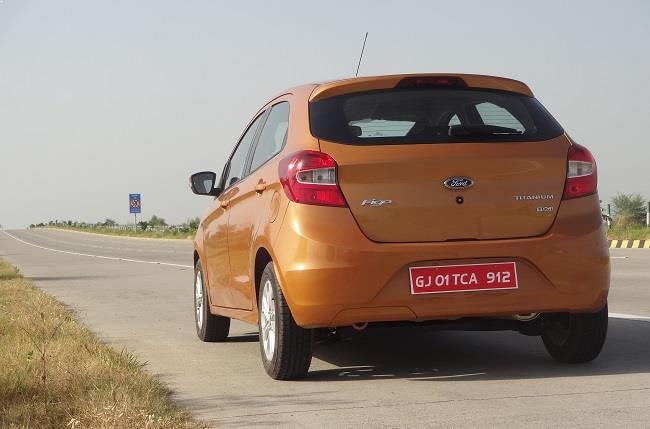 And as decent as the rear profile looks, it somehow doesn't look as edgy as the front profile of the car.

Get into the car, and you are immediately reminded of the Aspire. The new-generation Ford Figo gets the same dashboard, 3-spoke steering wheel with silver accents, steering mounted controls, a 4.2-inch SYNC multimedia infotainment system, and controls as the Aspire. The differentiating provision on the Figo hatchback is the all-black treatment instead of the Aspire's dual-tone dashboard. Furthermore, since the wheelbase of both the cars is also the same, the Figo hatch offers quite a spacious cabin. To be specific, with a wheelbase of 2,491mm, the new Figo is the most spacious car in its league. Moving on, the seating comfort and plastic quality could have been slightly better; its closest competitor, the Hyundai Grand i10, certainly scores better on these two fronts. 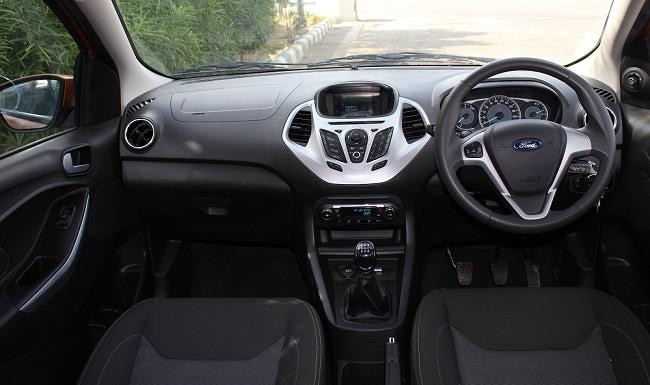 Coming to the features, the new-generation Figo is the most loaded car in its segment with features such as 6 airbags, anti-lock braking system (ABS) with electronic brakeforce distribution (EBD), electronic stability program, hill-assist, traction control system, Ford MyKey, 4.2-inch infotainment system, height adjustable driver seats, 20 storage spaces in the cabin, and an electronically adjustable power-steering among others. One must know, the new-gen Ford Figo's base trim also gets driver-side airbag - a feat unobserved in other cars in this segment. In fact, from the second trim onwards, the Figo gets both - driver and passenger side airbags. So in terms of safety too, the all-new Figo is far ahead of its rivals.

Before telling you how the new-generation Figo performs on the road, let me tell you about the available engine and transmission options. It comes with three powertrains - a 1.2-litre Ti-VCT petrol (87bhp, 112Nm), a 1.5-litre TDCi diesel (99bhp, 215Nm) and a 1.5-litre Ti-VCT petrol (110bhp, 136Nm). These are the same powertrains that do duty on the Figo Aspire in the same state of tune. While the first two engines get a 5-speed manual gearbox, the more powerful petrol unit - 1.5-litre Ti-VCT - gets the segment first dual-clutch automatic gearbox.

I drove both, the automatic and diesel, versions and liked the 1.5-litre TDCi better. Mostly because this engine is the most powerful in its league, and the power delivery is seamless. With the class-leading torque of 215Nm and almost no turbo-lag, this engine impresses in the city as much as it does on the highway. Thanks to the availability of enough power in the lower revv band, one doesn't have to shift gears too often - a blessing for city-driving. Nonetheless, the gearshifts could have been quicker, probably like the Hyundai Grand i10. Right from low revvs, the throttle response is decent and gets better in the mid-range. That said, the engine isn't as revv-happy as I expected it to be. 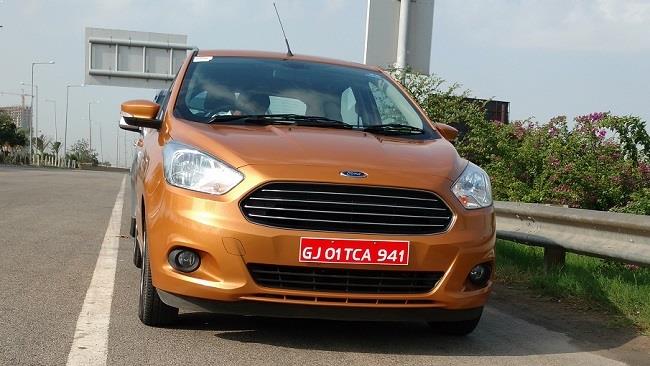 The car is really quick on straight lines, and is impressive at cruising too. The car goes up to 130Km/h at about 2,800rpm in the 5th gear. Though the engine can go up to 5000rpm, it remains silent and responsive only till 4,000rpm. The strong mid-range of the diesel mill makes overtaking quite easy and rapid. Since the vehicle's suspension seems more city-focused, it handles all sorts of potholes and uneven patches of city roads with ease. While the suspension does its job quite decently on open roads too, I miss the stability of old Ford cars - especially that of the first-generation Fiesta aka Classic. That said, it still feels more stable than most hatchbacks in the market except the Polo. The new-generation Ford Figo's steering setup too is city-drive focused much like most of its rivals; and though it weighs up a little on highways, I expected it to be more precise and better in terms of feedback.

Coming to the Figo 1.5 Ti-VCT - it gets the segment-first dual-clutch automatic gearbox. In fact, its closet rival - the Hyundai Grand i10 AT - still uses the outdated 4-speed torque converter. And if you have been driving an AMT or a conventional automatic transmission-equipped car, you will instantly feel the difference.

Though the gearshifts may not feel smooth at low speeds, the response at high RPMs is commendable. In the S (Sports) mode, the shifts are quicker and the gearbox downshifts or upshifts at a higher RPM range. However, in the S mode when the gearshift happens upon touching the redline, the engine would consume more fuel. So, the overall performance of the car is quite satisfactory.