Germany Gets Its First Electric Highway For Hybrid Trucks Electric mobility is the future, and there no denying that. While many countries are moving towards that future, we are still years away from achieving complete electrification, some more than others. Germany has recently taken one such baby step towards that goal by opening its first test route for overhead line hybrid trucks (OH trucks) or simply put an electric highway. Opened on a 10 km stretch of the A5 autobahn, the electric highway system uses Siemens eHighway technology that has been designed for hybrid trucks equipped with special equipment mounted on their roofs which allows them to draw electric power from overhead cables. This is the first-of-its-kind test on a public road in Germany and has become operational in Hesse, between Weiterstadt and Langen/Morfelden, and by mid-2020 the authorities plan to five such trucks on this route. 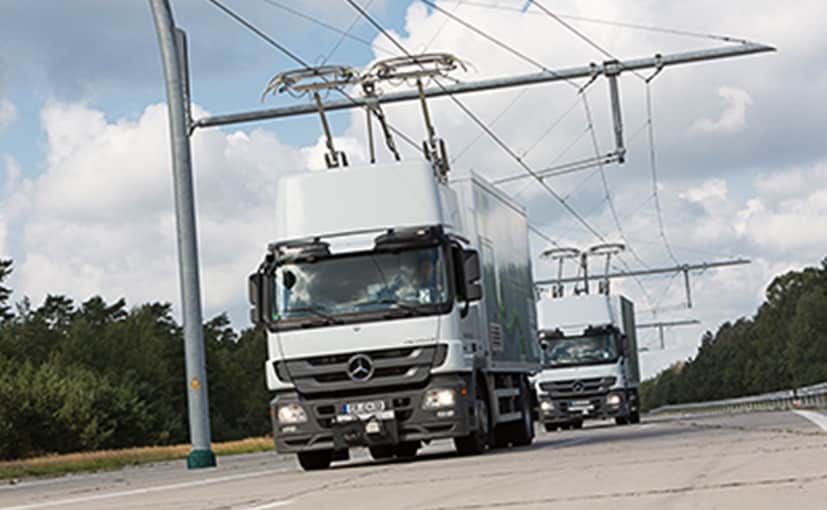 The trucks come with a hybrid system using electric motor, a diesel engine and batteries that can be quickly charged from overhead power lines

The trucks come with a hybrid system that used a powerful electric motor, a diesel engine and batteries that can be quickly charged from overhead power lines. The trucks, when connected to the overhead lines, run on electricity at up to 90 kmph and simultaneously charges its batteries. So, even when the trucks leave the overhead line on the highway and enter regular roads, they continue operating electrically and emission-free thanks to the energy stored in the batteries. And once the batteries are nearly depleted, the truck can continue running using the diesel engine. Siemens says that the eHighway system is twice as efficient as conventional internal combustion engines and helps reduces local air pollution and contributes significantly.

Rita Schwarzeluhr-Sutter, Parliamentary State Secretary at the Federal Ministry for the Environment, Nature Conservation and Nuclear Safety (BMU), commented, "Electrified overhead line trucks are a particularly efficient solution on the way to climate-neutral freight transport. We've tested the system for many years on private test routes. We're now inaugurating practical tests on the A5 autobahn between Frankfurt and Darmstadt, and two further test stretches will follow in the states of Schleswig-Holstein and Baden-Wurttemberg." 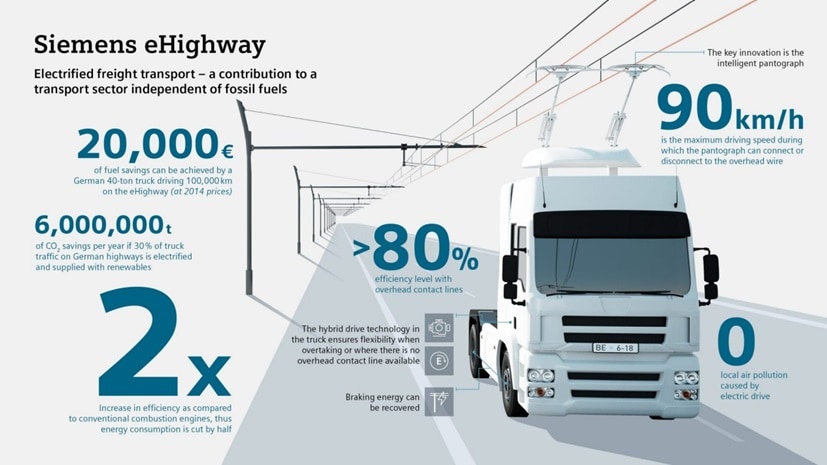 So far, the Federal Ministry for the Environment has funded construction of the pilot project with 14.6 million euro, and an additional 15.3 million euro has been made available for conducting the field trials in Hesse that will run until the end of 2022. The German government in total has made an investment of over 70 million euro for the development of the OH truck system. The technology is particularly interesting for truck transports that can't be shifted to the rail in the medium to long term.

Commenting on the opening of the eHighway, Roland Edel, Chief Technology Officer at Siemens Mobility GmbH, said, "The inauguration of Germany's first eHighway in Hesse marks a milestone in the decarbonization of road freight transport in the country. The Siemens Mobility innovation combines the advantages of electrified rail lines with the flexibility of road freight transport, thus offering an efficient, economical and environmentally compatible alternative to truck transport with combustion engines."

Siemens has conducted similar tests and demonstrations of the eHighway technology on a smaller scale in Sweden and near the US ports of Los Angeles and Long Beach.