Part of celluloid for life, here are 10 times when Mahindra's Classic 4X4 SUVs were featured in prominent roles in Indian movies. 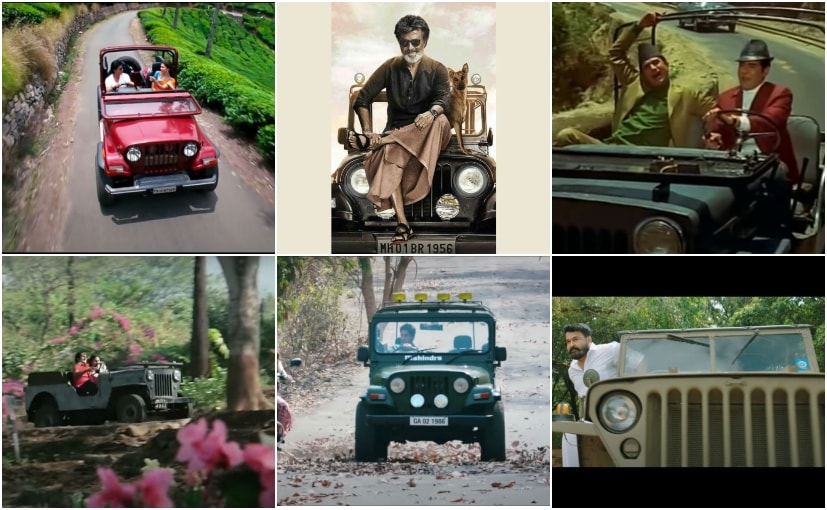 View Photos
From 1969's Aradhana to the 2019 flick Lucifer, Mahindra's Classic 4x4s are icons on screen

Movies are a view into our own lives. They are an extension of what the society is as a whole and that's why every aspect of a movie is so enjoyable. Now, this excitement turns up by tenfold when the movies are Indian. Our country, after all, has one of the largest film industries in the world spanning across multiple languages. These films have had a profound impact on how we've shaped the society right from the fashion choices to the way we speak and sometimes the way we perceive products as well. No wonder then, some products tend to attain an iconic status after featuring on celluloid. In this case, we are talking about Mahindra's Classic 4X4 SUVs. One of India's oldest automakers has had an expansive journey in the movie business as well, albeit as a star in several films. These SUVs have become classics over time as they are adored by the fans and appearances in some of the movies have made them even more endearing and have immortalised these SUVs. Don't believe us? Here are 10 times when Mahindra 4X4 SUVs were featured in prominent roles in Indian movies. 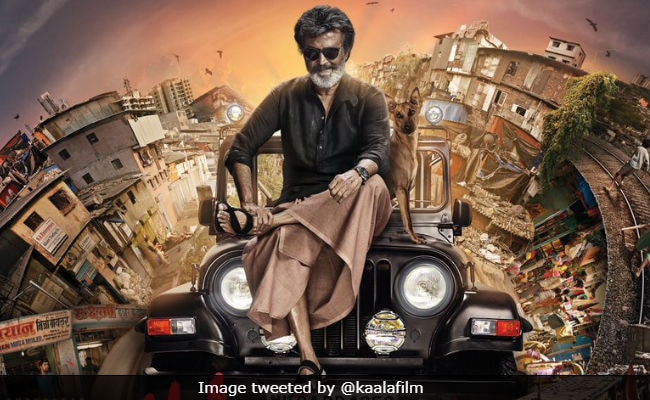 Kaala was released in 2018 with the blacked-out Thar that will be on display at the upcoming Mahindra Auto Museum | Image Credit: Wunderbar Films

Kick-starting this list with the Thalaiva, the Mahindra Thar was a part of superstar Rajnikanth's 2018 movie Kaala. Featuring prominently on the poster, the black Thar is the actor's ride in the movie and attained quite the cult status after its release. In fact, the impact was so huge that Mahindra Group Chairman, Anand Mahindra had requested the producers to send the Thar to him once the production is complete. The producers accepted this request and Rajnikanth's black Thar will soon be found in the upcoming Mahindra auto museum. 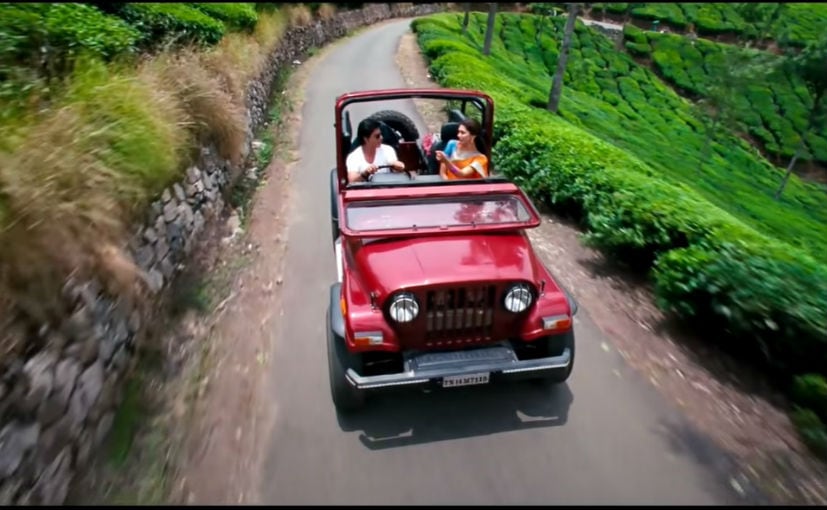 The red open-top Mahindra Thar is a part of an action-packed chase sequence and a song as well | Image Credit: Red Chillies Entertainment

Another story of another Thar in a feature film, the 2013 action-comedy Chennai Express starring actors Shah Rukh Khan and Deepika Padukone was a blockbuster hit. The movie was extremely popular among the masses with some stunning visuals and extremely quirky dialogues. What also worked throughout were the chase sequences, and in true director Rohit Shetty's fashion, flying cars were in abundance. The red open-top Mahindra Thar stood out amidst all the action and complemented its leads quite well throughout the movie. 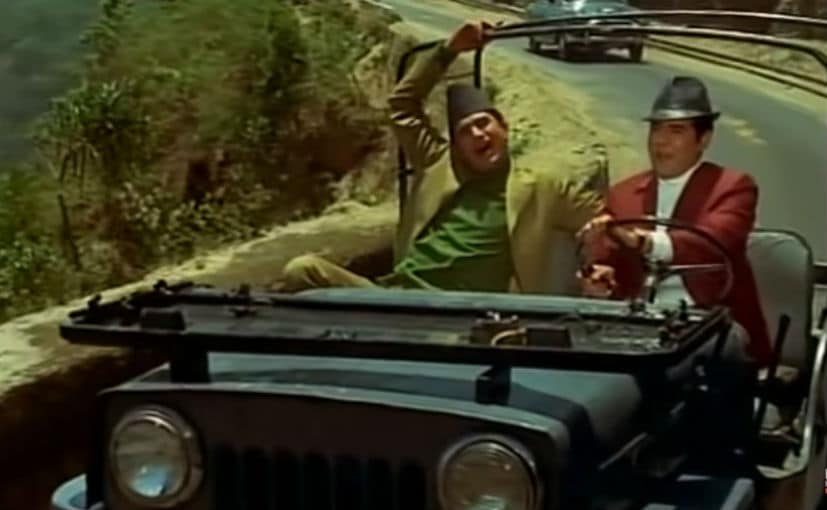 The 1969 movie Aradhana was a super hit during its time and continues to be remembered for its scenic locations, songs and dialogues. Who can forget the iconic song "Mere sapno ki Rani"? As the protagonist Rajesh Khanna in his open-top UV tries to woo his lady love Sharmila Tagore, who is on a moving train, Bollywood captured one of its most beautiful cinematic memories. What you may have not noticed though is that the open-top UV driven in the song by actor Sujit Kumar is actually a Mahindra 4x4. One of the first vehicles to be produced by the automaker, the no-frills off-roader was quite popular and found its cult status on camera with the song. 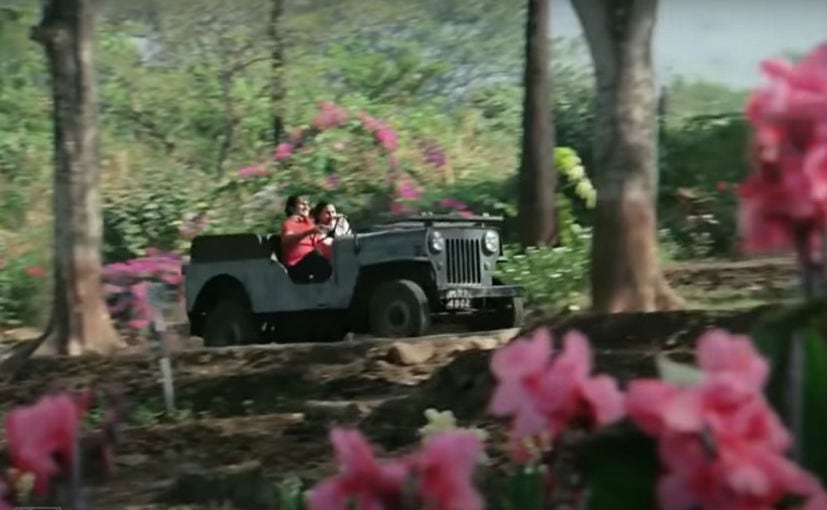 The 1975 film Deewar is an iconic movie about the difference in classes and the rise
of the underworld in Mumbai. All makings of a masala entertainer, and that it was. At the same time, it set benchmarks for developing socially-relevant Indian cinema. The movie remains one of the finest films in actors Amitabh Bachchan and Shashi Kapoor's careers along with some splendid performances by actors Nirupa Roy, Parveen Babi, Neetu Singh and many more. It also featured the Mahindra 4x4 in a prominent role as the one to be used by Shashi Kapoor's character. The SUV features in the song "keh doon tumhe" in an open-top avatar and is actually the long-wheelbase version. It also gets more screen time as a police vehicle with a soft-top adding to the morally upright character of Ravi Verma as a simple, dutiful and honest police inspector who had the mother on his side in this sibling rivalry. 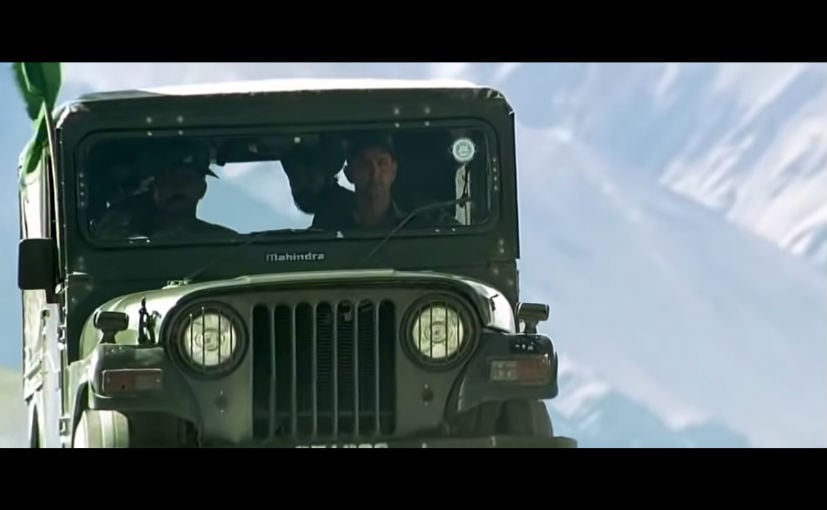 The 2004 flick Lakshya features the Mahindra MM550 in the second half of the movie set during the Kargil War | Image Credit: Excel Entertainment

Mahindra & Mahindra and the Indian Army have had a long-standing association and that was beautifully visible in the 2004 Hrithik Roshan starter Lakshya. The movie was about the 1999 India-Pakistan Kargil War on Tiger Hill and the war scenes feature the Mahindra MM550 prominently in the vast lands of Leh. Wearing the military green shade, the utilitarian MM550 was a subtle nod to the hard lives of our soldiers posted across the harshest terrains of India as they put their lives on the line for the country. The movie's brilliant cinematography coupled with an impressive star cast ensured that we remembered the MM550 long after leaving the theatres. 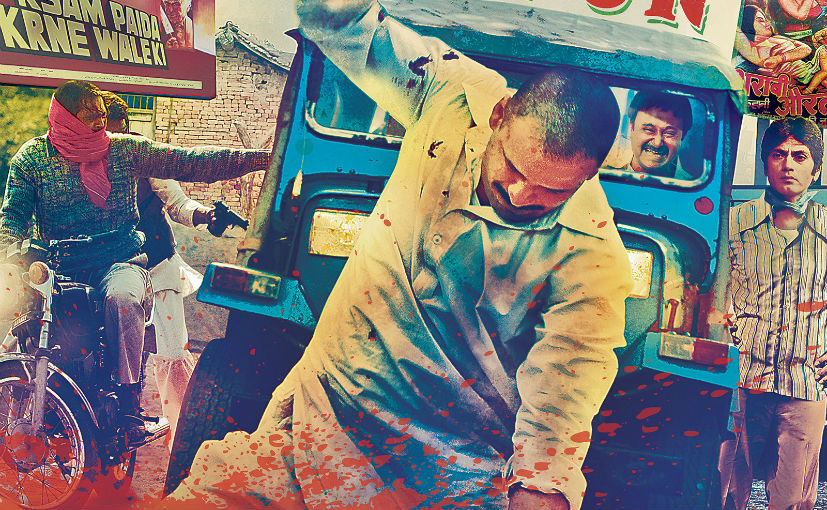 The Mahindra MM540 features on the poster of the Gangs of Wasseypur and through the movie's screentime adding to the realism | Image Credit: Viacom 18 Motion Pictures

6. Gangs of Wasseypur - All Mahindra SUVs

The Gangs of Wasseypur saga is a cult and the two-part crime drama has seen some of the best modern-day actors getting a much-needed platform to showcase their talent. It's also considered a masterpiece in realistic filmmaking with director Anurag Kashyap helming the project. The movie created the impact thanks to the emphasis on realism and a big part of that journey was of Mahindra SUVs featuring from time to time. In fact, the movie is set from the early 1940s to the mid-2000s and manages to capture the automaker's journey with India rather well. Right from the brand's first 4x4 to the MM440, MM550, to the Major and the Armada. Who can forget the now meme-able "chaabi kahan hai" scene, or Faizal Khan, played by actor Nawazuddin Siddique, stepping out of the modified Mahindra 4x4. The SUV also finds space on the poster, which says a lot about the setting of the film. The next time you watch the movie, look around the frames to see the presence of Mahindra's SUVs that make an impact without trying too hard. 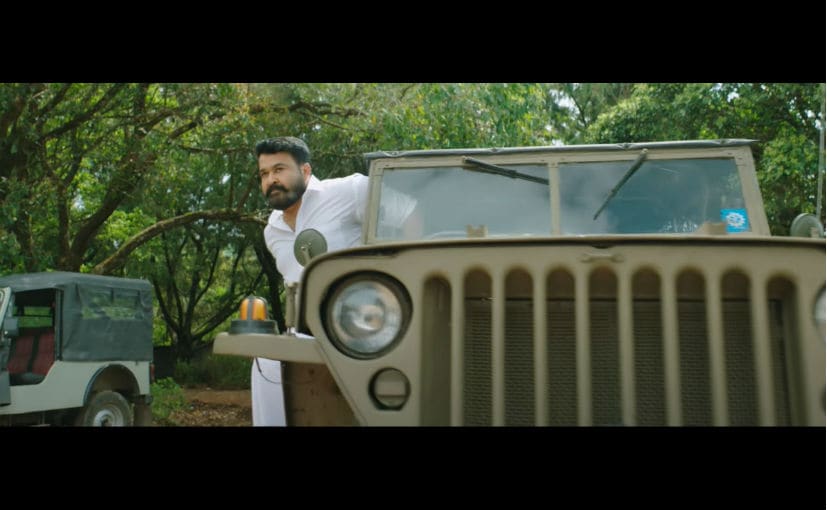 The Mahindra 4x4 in Lucifer has ample screentime and grabs all the attention in every frame | Image Credit: Aashirwad Cinemas

This 2019 Malayalam political drama is high on emotions and manipulation and sets quite the vibe for Kerala politics. But standing tall in the middle of the chaos is legendary actor Mohanlal who chose the vintage Mahindra 4x4 as his ride in this movie. The off-roader finished in the desert green shade has quite some screen time in the movie as the protagonist's carriage. The movie, as its name suggests is about evil fighting evil, but Mohanlal's Stephen Nedumpally or Lucifer is the evil do-gooder you want to root for. 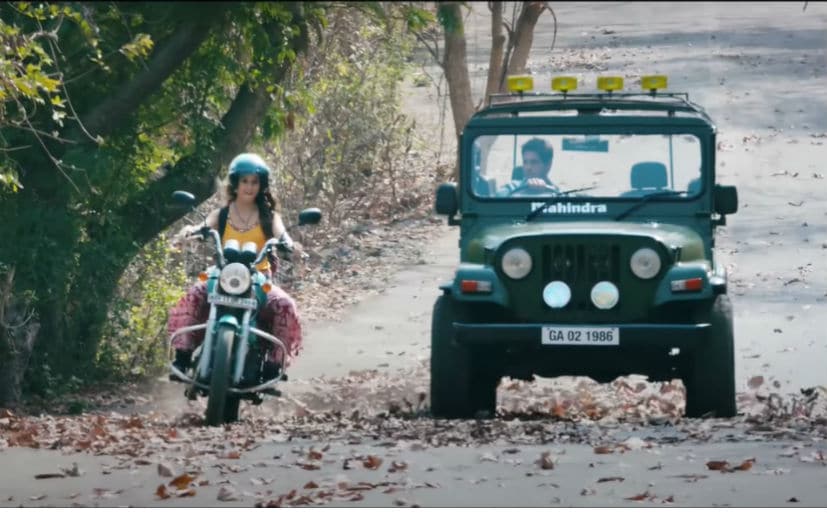 While the movie name refers to the antagonist, this 2014 thriller was actually a love story about redemption. The Mohit Suri flick features the Mahindra Thar driven by Guru Divekar, played by actor Sidharth Malhotra, and Aisha Verma, played by actor Shraddha Kapoor and has plenty of screen time. Finished in an olive green shade, the open-top off-roader also gets some tastefully done modifications including the alloy wheels with the Maxxis mud-terrain tyres and a roof-mounted light bar. There are auxiliary lamps mounted on the front bumper as well and adds to the brilliant look of the off-roader. With the first half of the film set in the picturesque Goa, the Thar blends in beautifully and will bring back some Goan holiday memories for many. 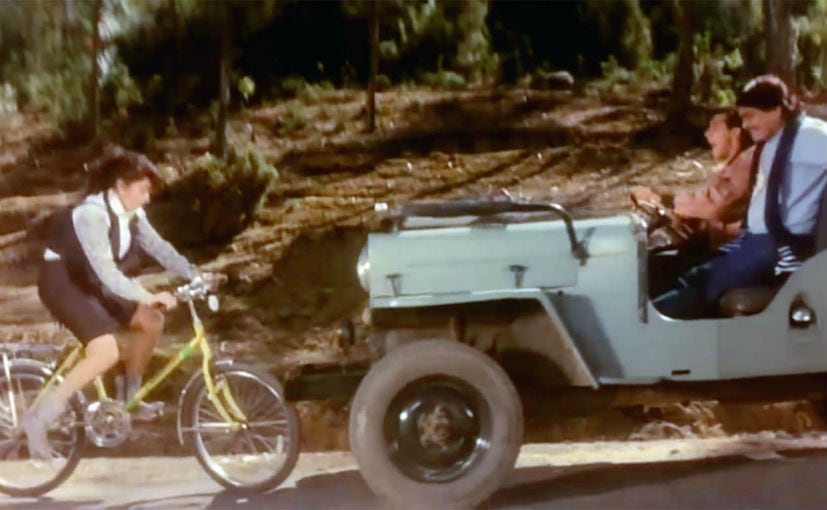 The Mahindra 4x4 features in some pivotal scenes of Saajan, which is a pleasant watch even after nearly three decades | Image Credit: Eros Entertainment

Bollywood's highest grosser in 1991 was the movie Saajan starring actors Madhuri Dixit, Sanjay Dutt and Salman Khan in the lead roles. The movie saw spectacular box office success and contributing to the same were the scenic locations, timeless songs and fabulous performances. The movie is still remembered for its album and is a fun watch nearly three decades later. It also features the open-top Mahindra 4x4 in some of its prominent scenes. The Mahindra SUVs were always associated with the picturesque mountains and the splendid weather meant it did not require a roof to spoil the fun. It also represents the time when finding one its leads behind the steering wheel wasn't a bad thing. The '90s were indeed happier times! 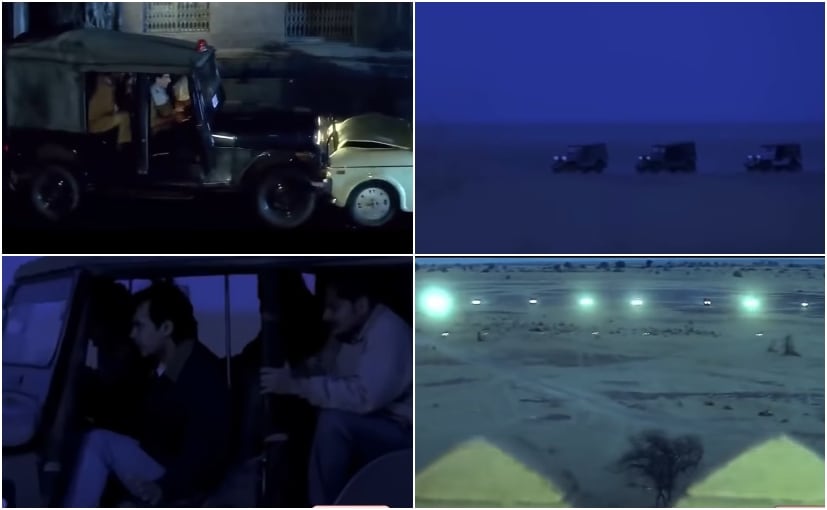 Sarfarosh had parts of the movie set in Rajasthan and depicted the popularity of Mahindra SUVs in the state | Image Credit: Cinematt Pictures/Eros Entertainment

The 1999 cop drama Sarfarosh is one of the best movies in its genre and holds a cult status today for its brilliant direction, amazing ensemble star cast and realism that make it a timeless classic. The movie is full of Mahindra SUVs including the 4x4, Major and the Classic at different intervals as vehicles used by the law enforcement. The Aamir Khan flick also scores high particularly on the climax scene when the SUVs surround the palace in Rajasthan where the final showdown is taking place. The sequence is lovely from a visual standpoint and also establishes the popularity of Mahindra SUVs in the region.