According to the leaked information, the Toyota Urban Cruiser will officially go on sale in India on September 22, 2020. Pre-bookings for the SUV will commence from August 22. The Toyota Urban Cruiser is all set to go on sale in India this festive season, and according to a leaked internal document, the subcompact SUV will be launched on September 22, 2020. The same document also says that Toyota will begin taking pre-bookings for the new Urban Cruiser later this month, on August 22, which has already been announced by the carmaker. The document also suggests that Toyota will start delivery and despatches for the new Urban Cruiser only from October 2020. 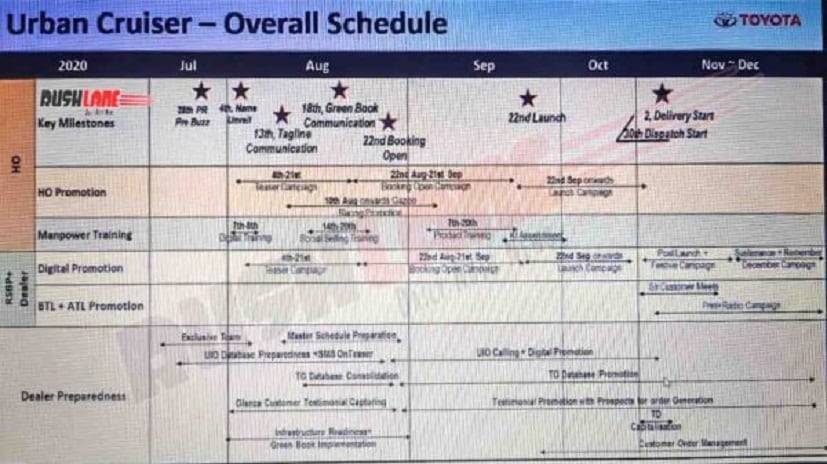 The new Toyota Urban Cruiser will essentially be the re-badged version of the Maruti Suzuki Vitara Brezza, and the company has already shared a teaser image of the upcoming SUV. Similar to what we saw with the Baleno and the Glanza, the new Toyota Urban Cruiser is also likely to remain identical to the Vitara Brezza. However, the teaser image shared by the company suggests that the SUV will get an updated face with a larger twin horizontal slat grille, and a revised front bumper. However, the fog lamps, alloy wheels and rest of the exterior elements are likely to remain unchanged.

Also Read: Did Toyota's Glanza Experiment Work? And Will The Urban Cruiser SUV Do Better? The cabin design and features are also expected to remain unchanged. However, Toyota is likely to offer an advantage with its warranty packages coupled with its famed after-sales and service. The Toyota Glanza (rebadged Maruti Suzuki Baleno) for instance, gets a 3 years/100,000 km warranty, with the option to extend it up to 5 years/220,000 km. The same could be on offer with the Urban Cruiser as well.

With regards to powertrain options, the Toyota Urban Cruiser will borrow the 1.5-litre K-Series petrol engine from the Vitara Brezza. The BS6 compliant engine is tuned to make about 103 bhp and 138 Nm of peak torque, while mated to a 5-speed manual gearbox and an optional 4-speed automatic torque converter unit. The engine also gets a mild-hybrid version that powers Maruti's XL6 and S-Cross, which could also be part of the package.