The new Revolt RV400 is the first electric motorcycle to be launched in India, and it comes with an ARAI certified range of 156 km on a full charge. The new electric bike is developed by Gurugram-based Revolt Intellicorp, founded by Rahul Sharma, former co-founder of Micromax Informatics. 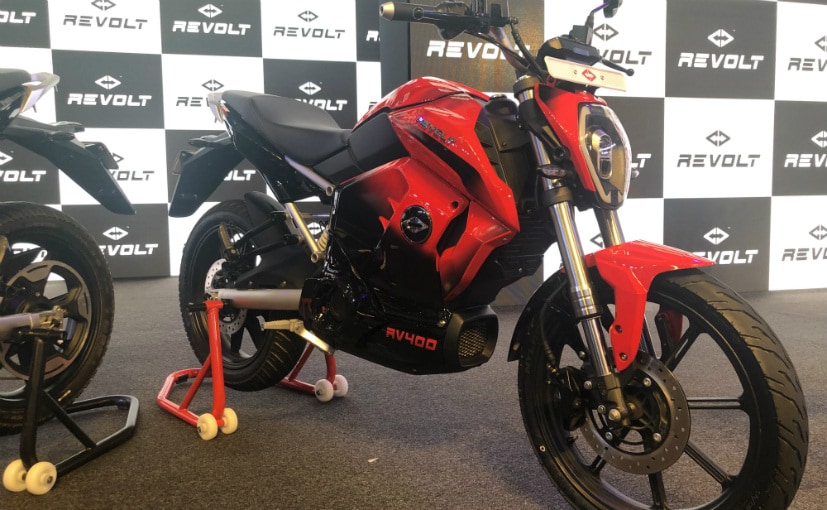 Revolt RV 400 and RV 300, India's first electric motorcycles have gone on sale in India today, and we have all the highlights from the launch event here. The new electric motorcycle has been developed by Gurugram-based Revolt Intellicorp, founded by Rahul Sharma, former co-founder of Micromax Informatics. Bookings for the new Revolt RV 400 electric bike are already underway on the company's official website for ₹ 1000. The bike has been launched with a special payment plan for 37 months, instead of a fixed price, which starts at ₹ 2999 for the entry-level Revolt RV 300.

The Revolt RV400 boasts of a range of 156 km (ARAI-certified) on a single charge in Eco mode. In City mode, the range is expected to be around 80-90 km and Sport mode range will depend on riding style and terrain. It has a top speed of 85 kmph. The new RV400 electric motorcycle will offer a choice of three riding modes - Eco, City and Sport.

The RV400 will also have a dedicated mobile app which will offer a complete range of features, including satellite navigation, bike locator, real-time bike information and diagnostics, geofencing for security, doorstep battery delivery, online payment gateway for a battery swap, and anti-theft features.

Here Are All The Highlights From The Launch Of The New Revolt RV 400:

04:04 PM
Revolt RV400 Electric Motorcycle India Launch - Live!
Revolt had launched its first electric motorcycle in India with a unique and lucrative payment plan.
Get all details about the bikes, prices, and more here. 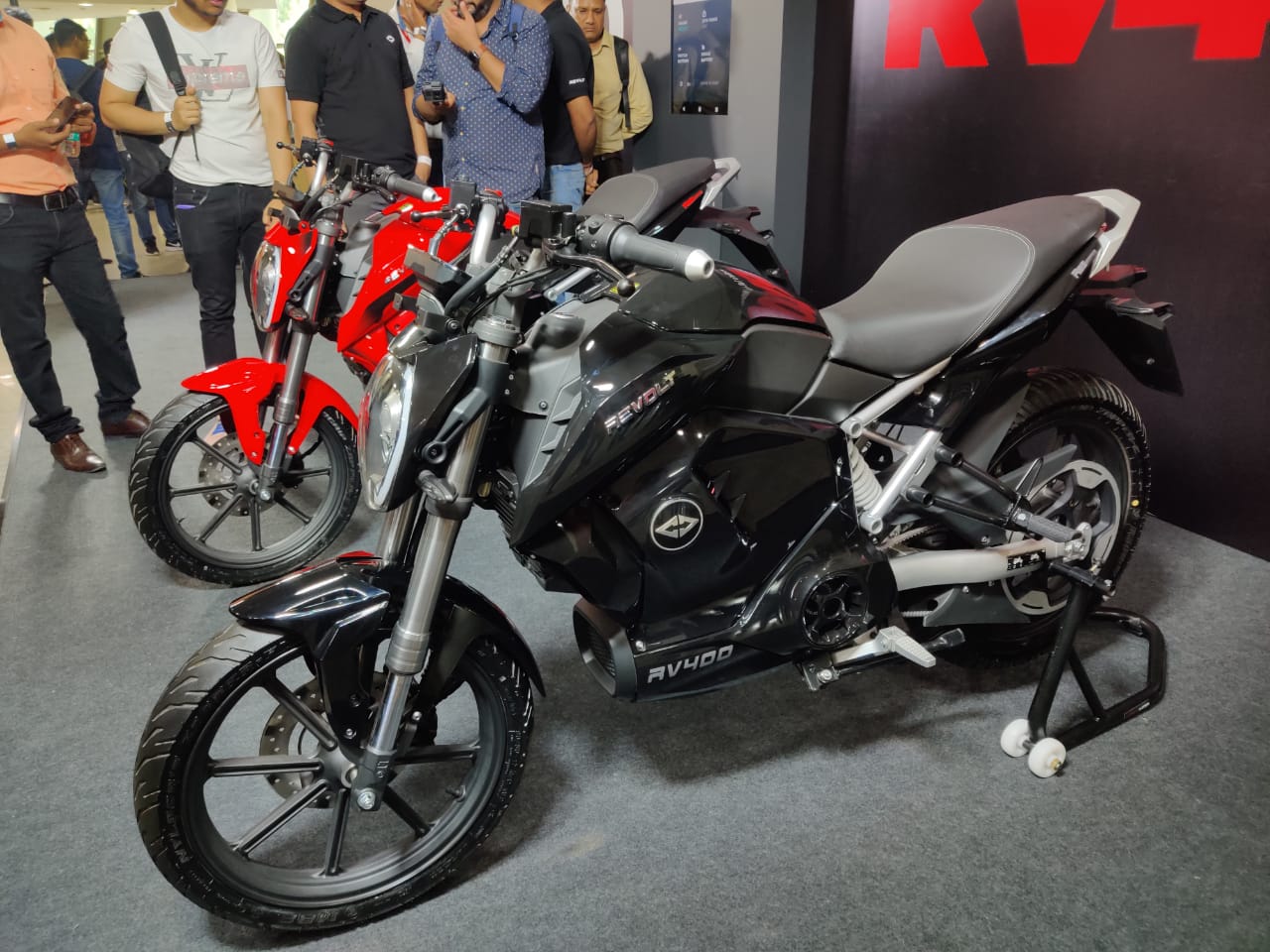 03:29 PM
Revolt RV400 Electric Motorcycle Launched With Special Payment Plan
Unlike other Revolt has launched India's first electric bike with a special payment plan - My Revolt Plan (MRP). Instead of paying in one go or EMIs (backed by heavy interests), customers can get a Revolt electric bike starting at Rs. 2999 per month, for 37 months. The RV400(base) and RV400 Premium come at Rs. 3499 and 3999 per month respectively, for the same 37 month period. 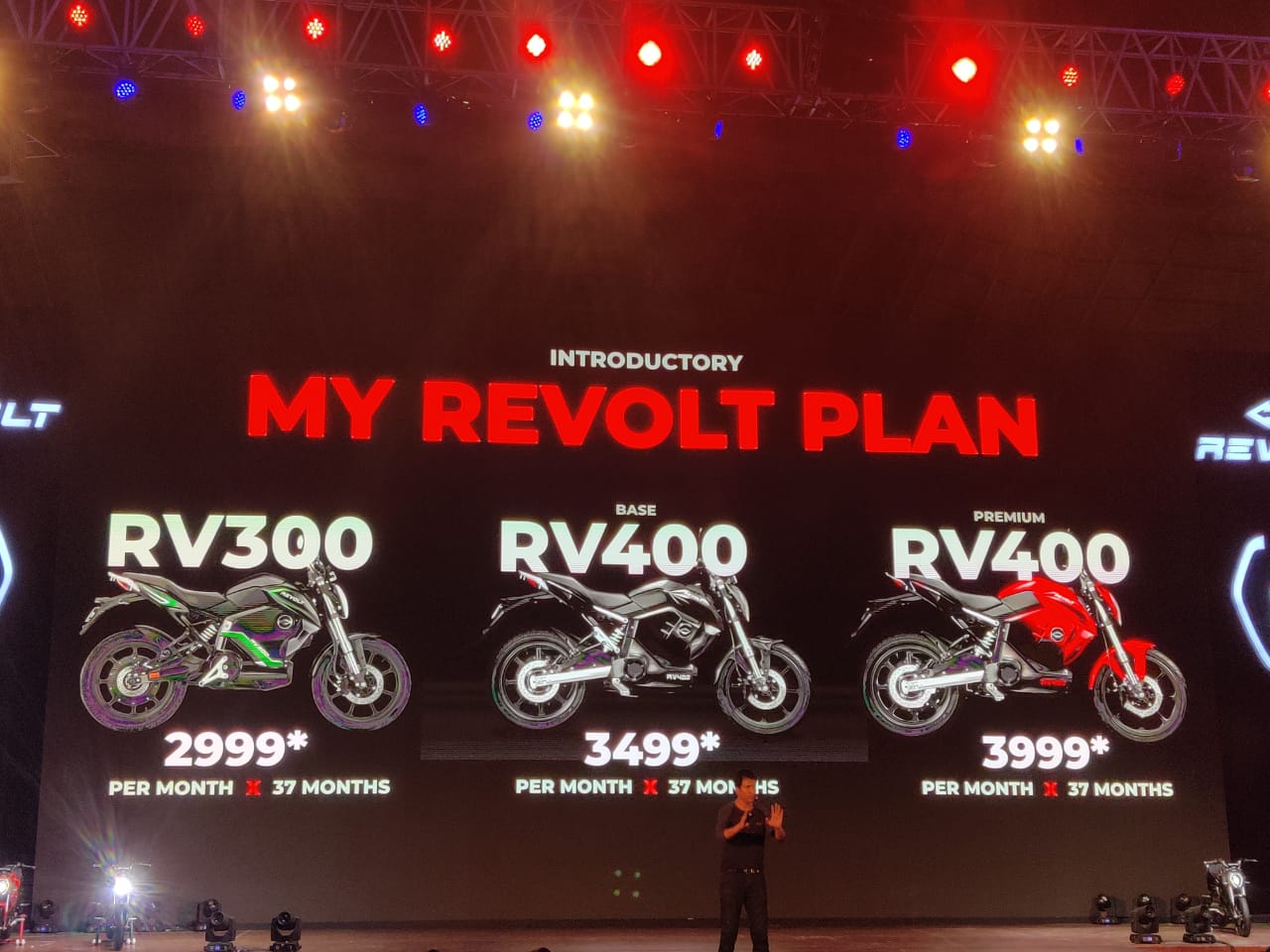 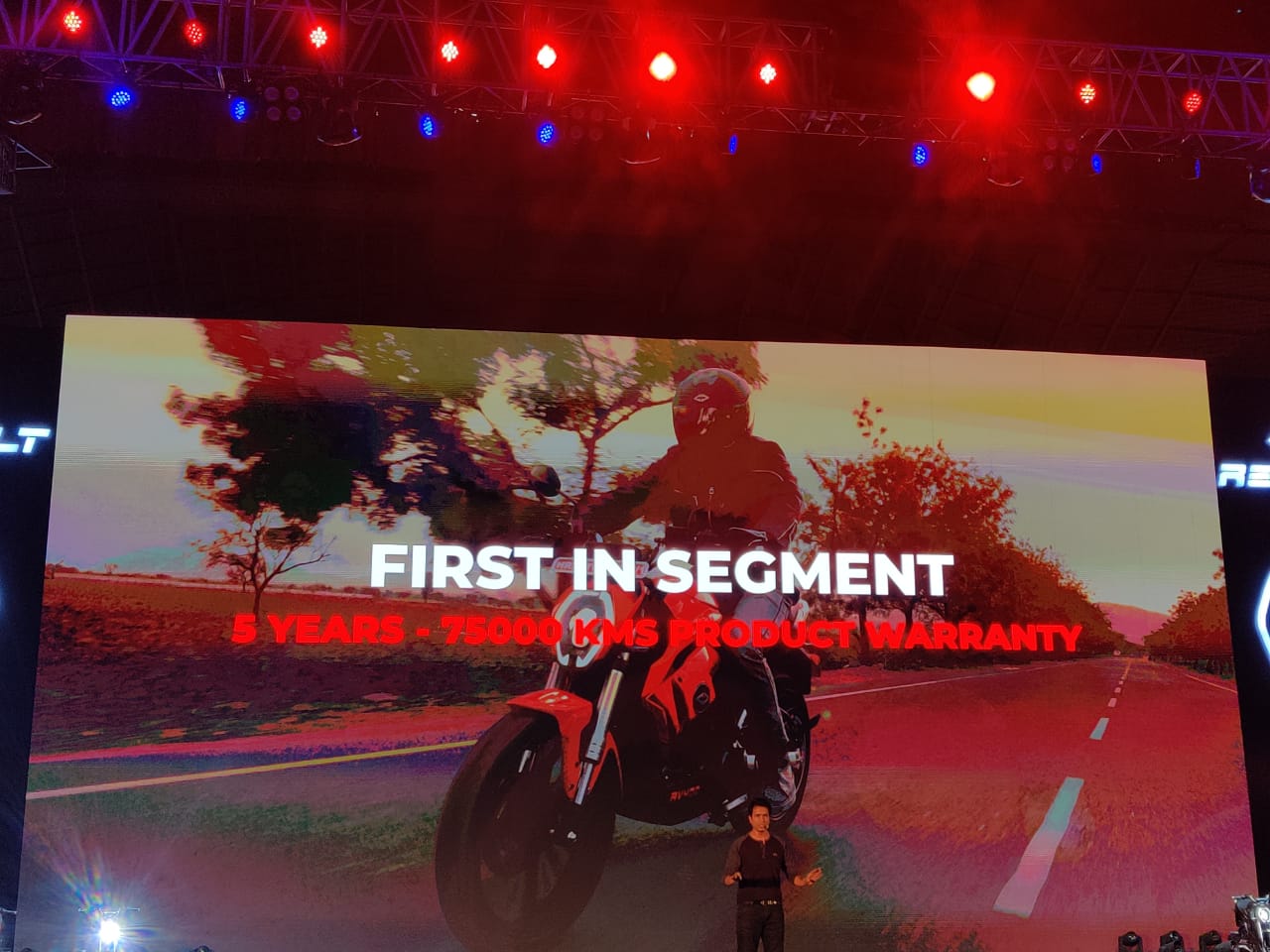 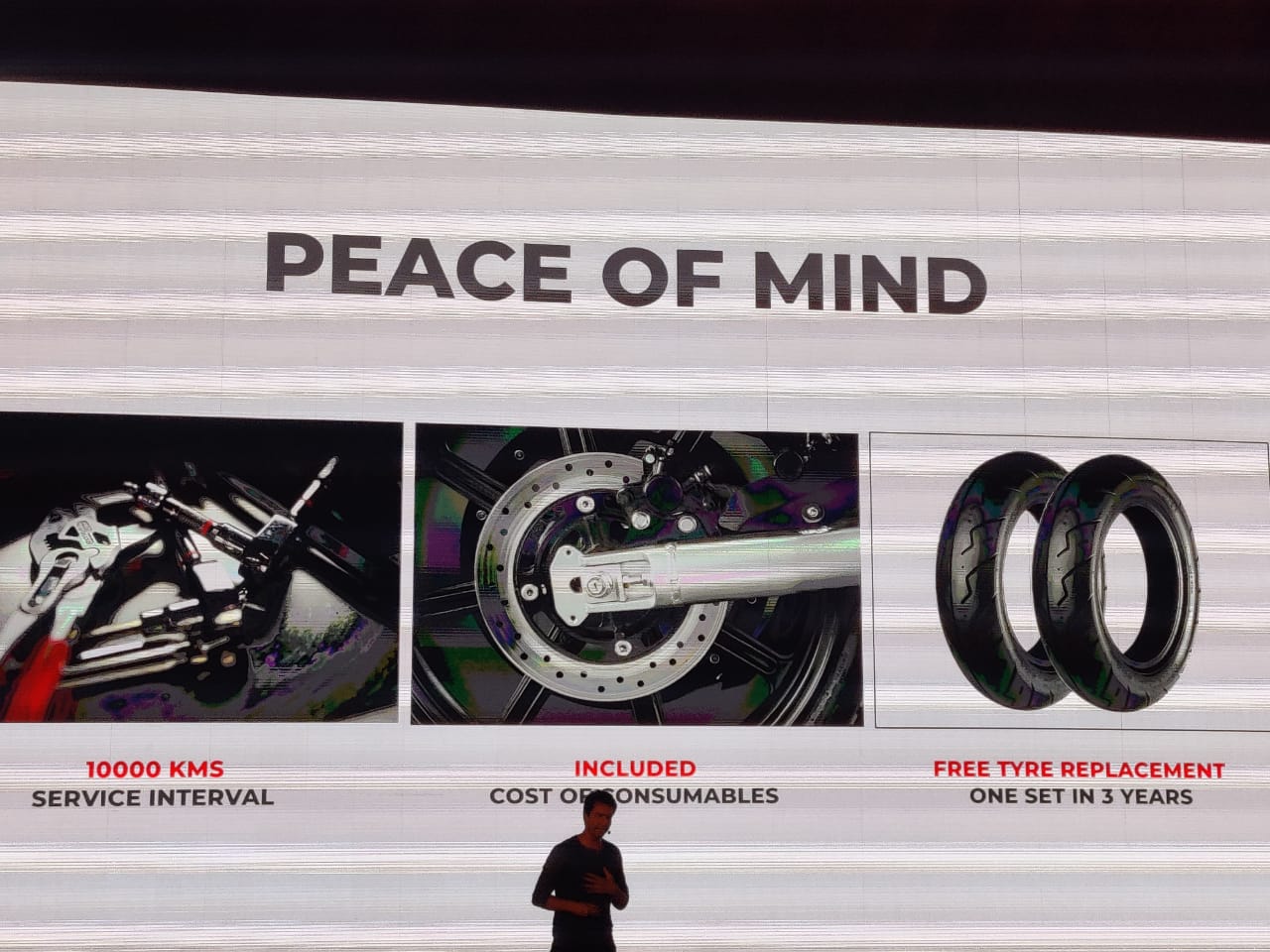 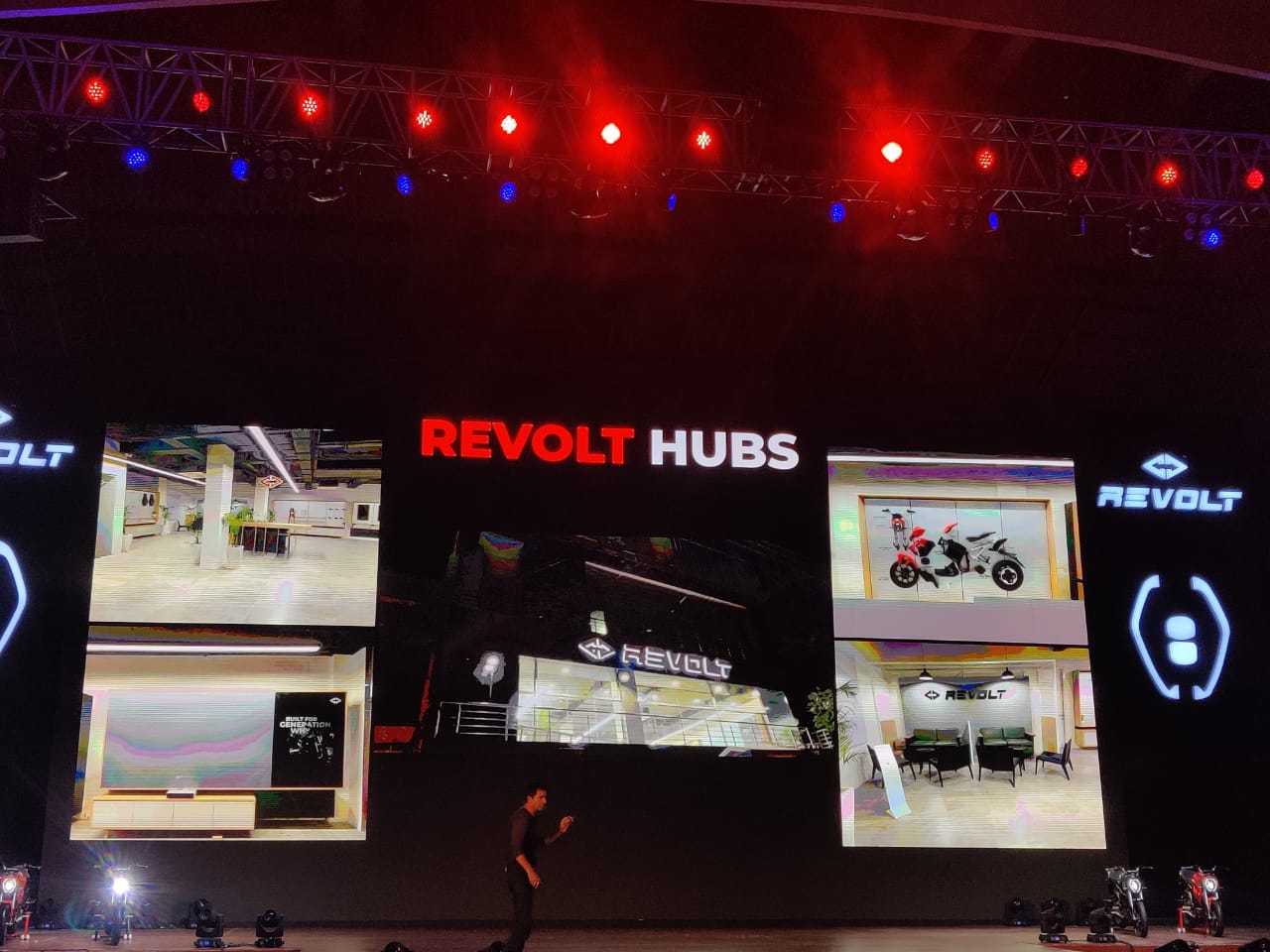 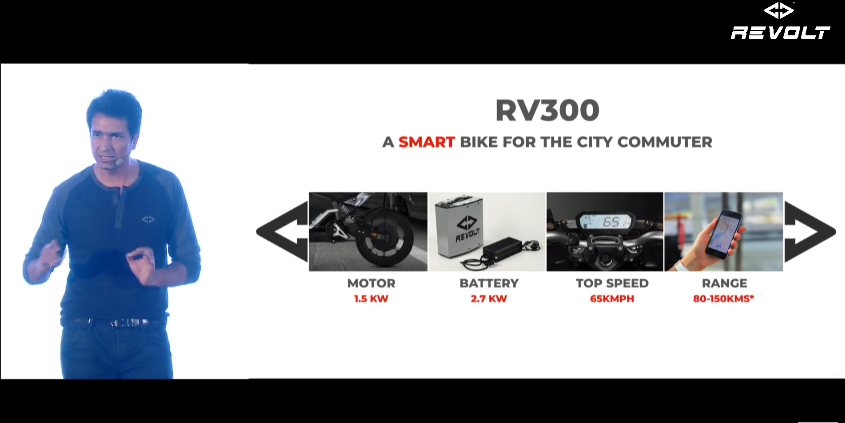 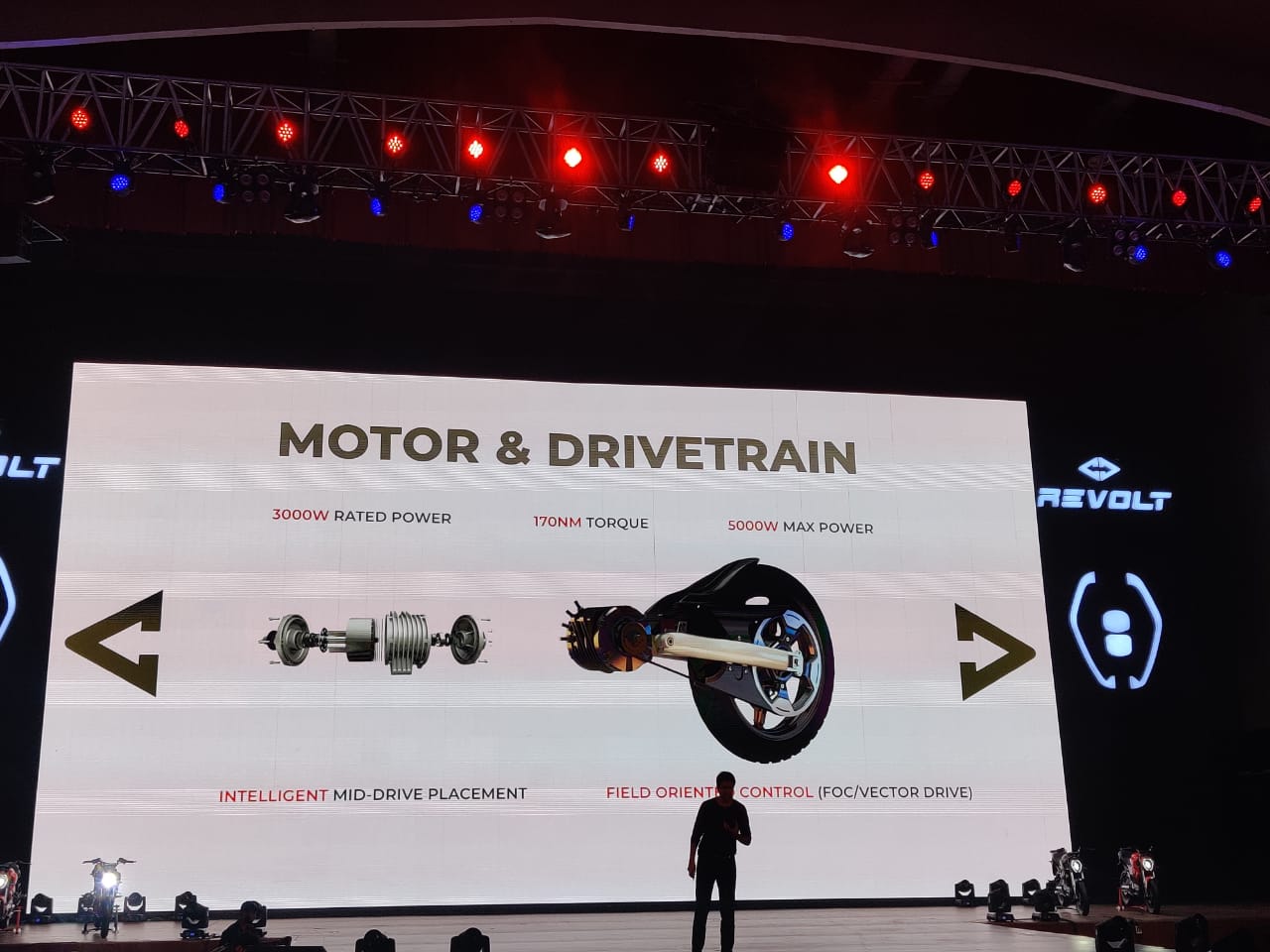 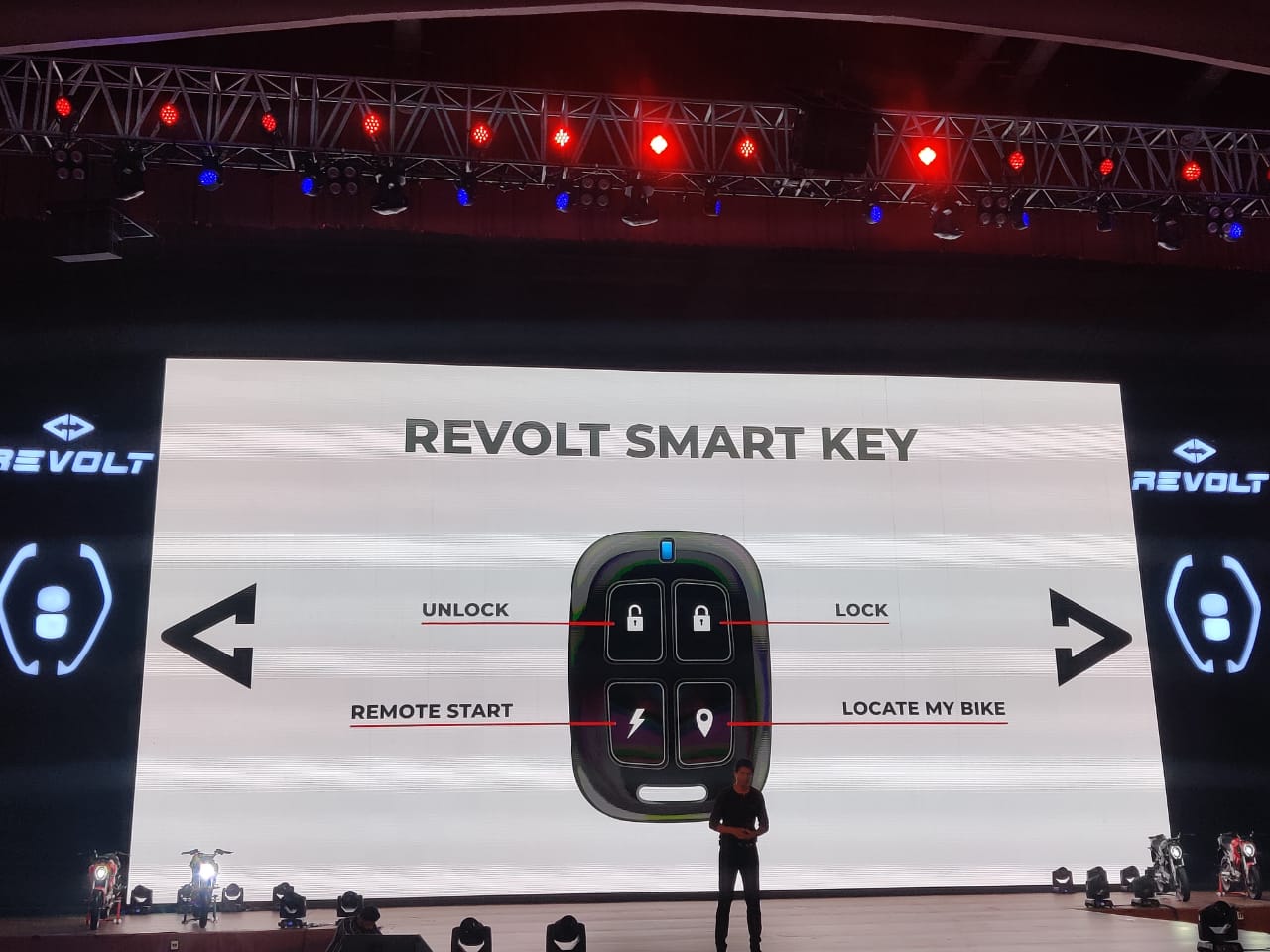 02:53 PM
The Revolt RV400 is IP67 certified and thus offers better water wading ability compared to any other motorcycle. 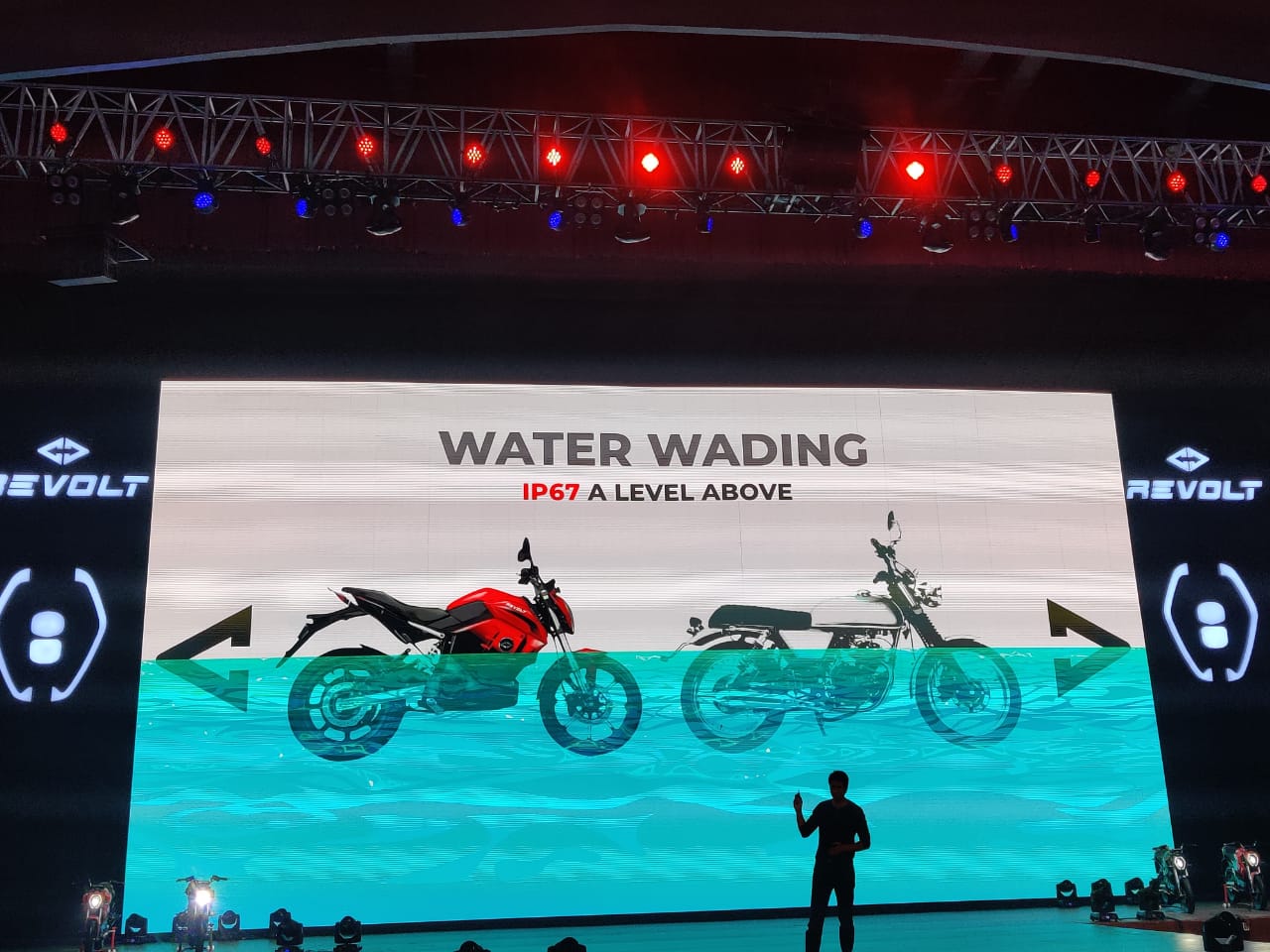 02:51 PM
Revolt RV400 Electric Motorcycle India Launch - Live!
The motorcycle comes with smartly designed ergonomics, with adjustable foot pegs which allows you to modify the riding position, and the company says that the vehicle's ergonomics can suit 95 per cent Indians. 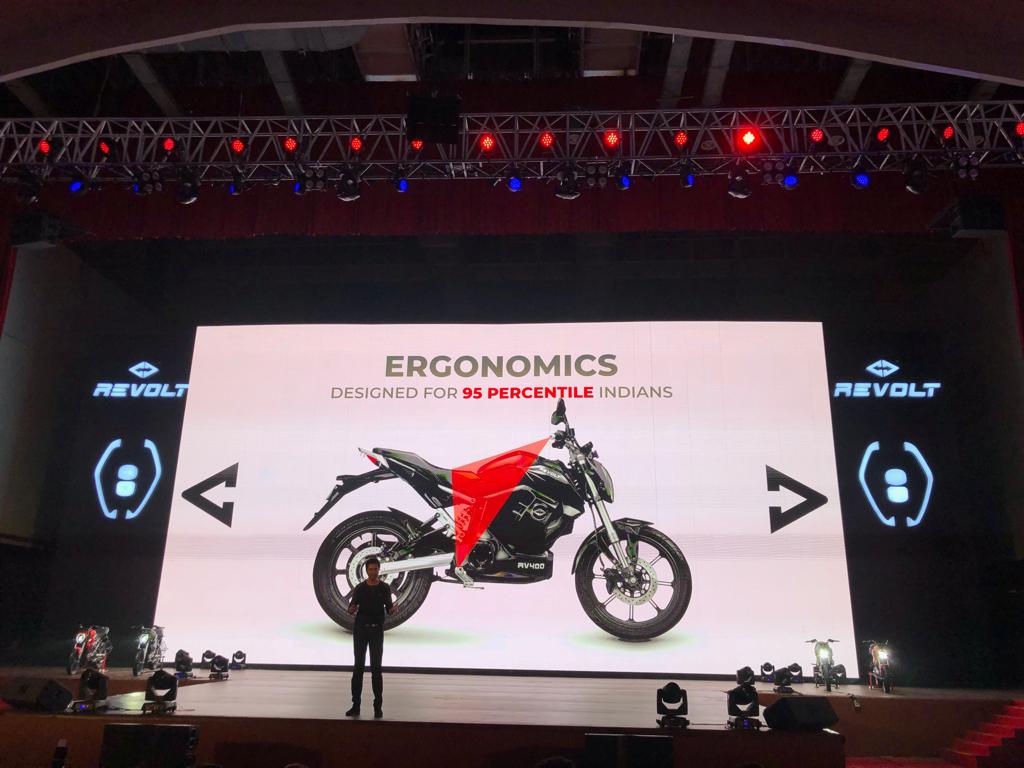 02:43 PM
Revolt RV400 Electric Motorcycle India Launch - Live!
The bike comes with a connected helmet (optional) with the bike, with speakers and microphone. It can used to Voice activate the motorcycle. The system is powered by Google. 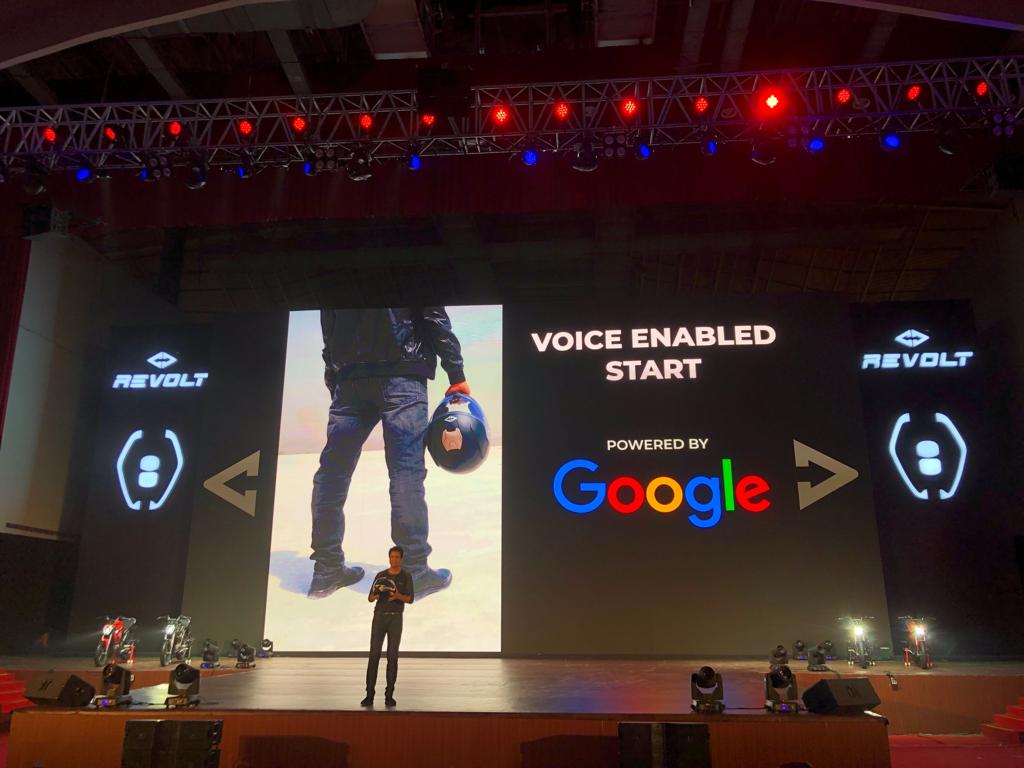 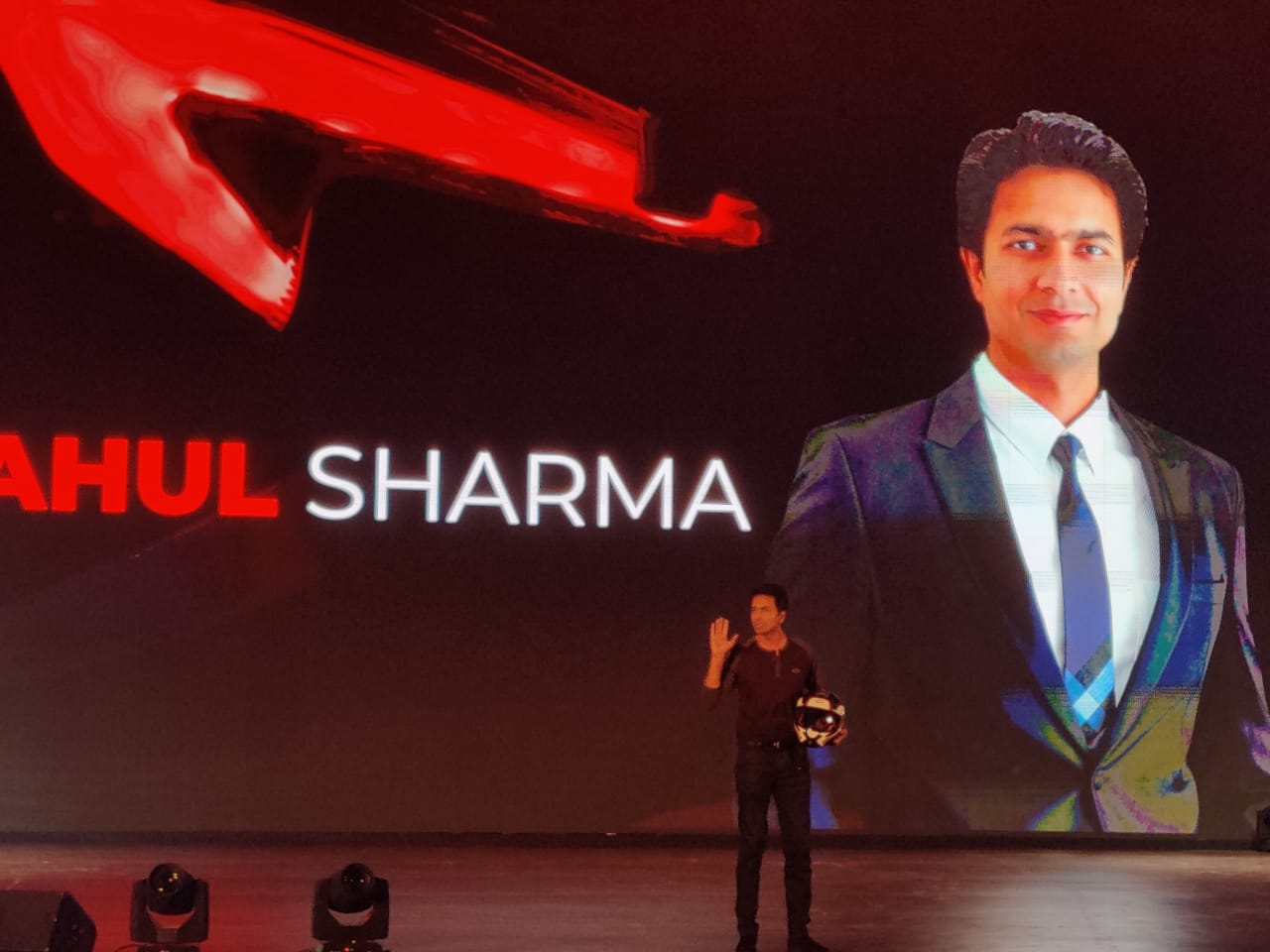 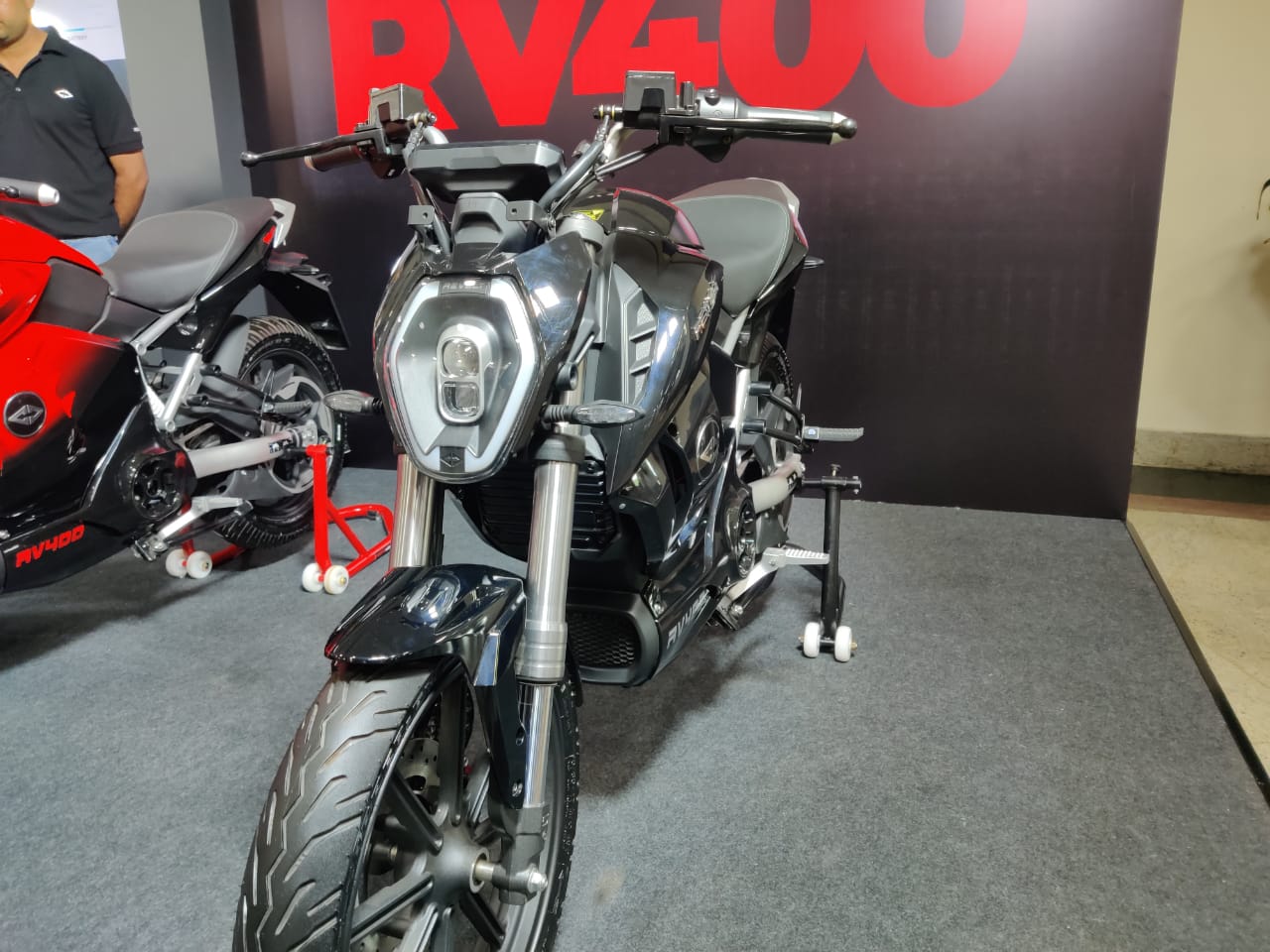 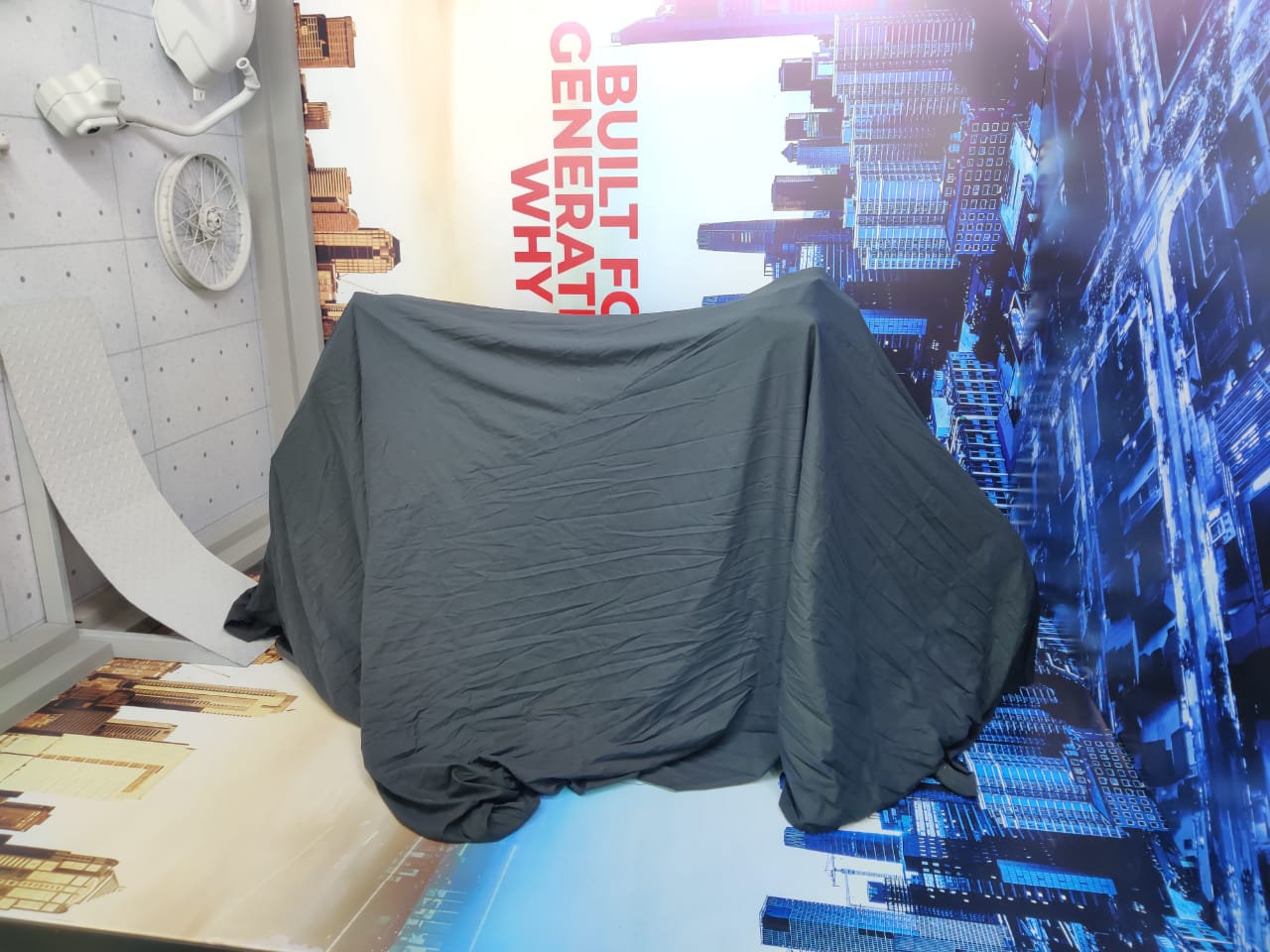 02:20 PM
Revolt RV400 Electric Motorcycle Launch - Live Update!
The stage is all set for the big launch of the new Revolt RV400 electric bike, and we are just moments away from the launch event to begin. 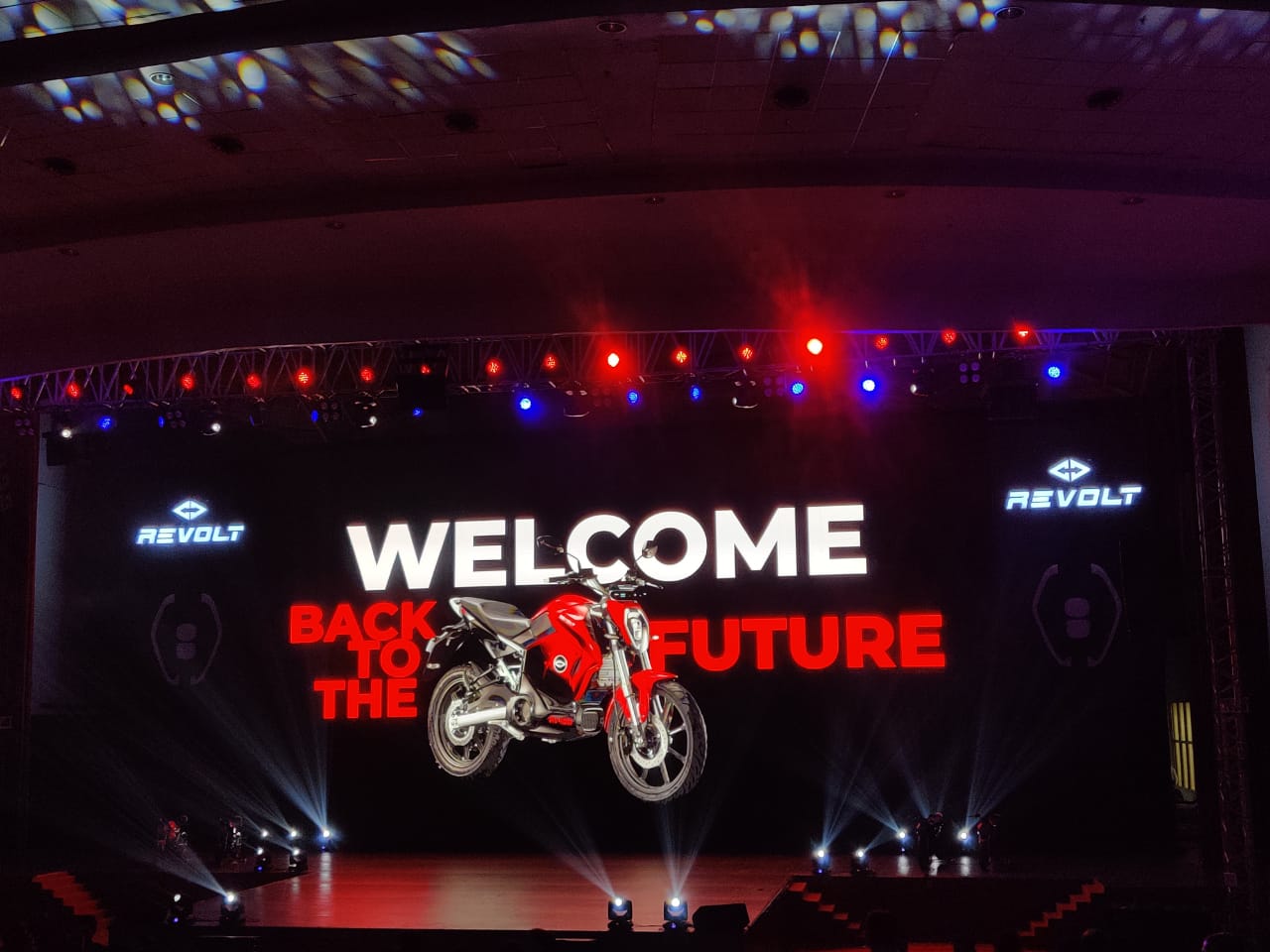 02:08 PM
Revolt RV400 Electric Motorcycle India Launch - Live!
The Revolt RV400 boasts of a range of 156 km (ARAI-certified) on a single charge in Eco mode. In City mode, range is expected to be around 80-90 km and Sport mode range will depend on riding style and terrain.

01:47 PM
Revolt RV400 Electric Motorcycle India Launch - Live!
The Revolt RV400 will offer complete peace of mind from range anxiety, thanks to an on-board charger, which can be used on any conventional 15A power socket to recharge in less than 4 hours. Additionally, the battery pack is removable and a portable charger is also provided with the electric bike to conveniently recharge the battery anywhere at a convenient location like work, or home. 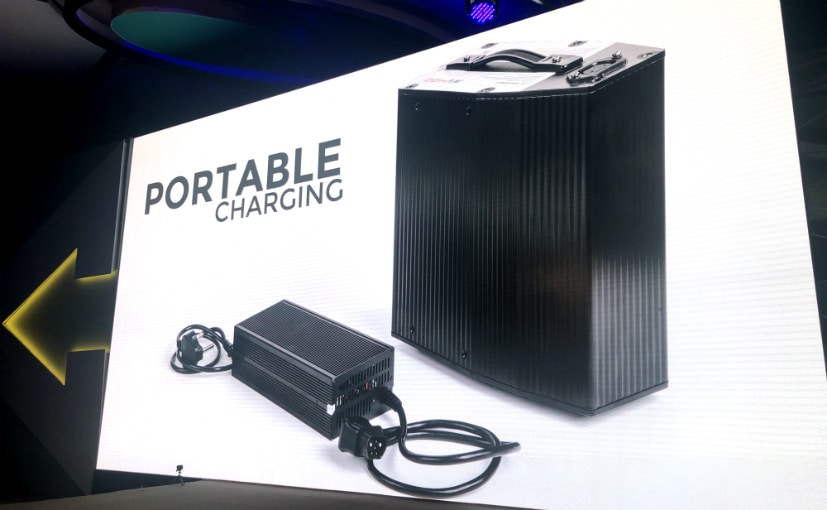 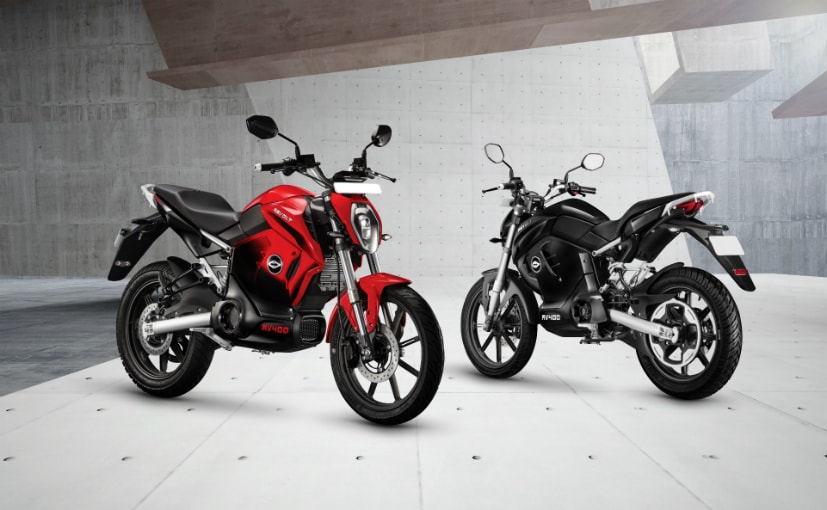