Triumph Thruxton R Black Spotted On Test In The UK

Triumph may be launching a 'blacked out' version of the Thruxton R - to join the 'Black' editions in the Bonneville family, and is likely to be called the Thruxton R Black. 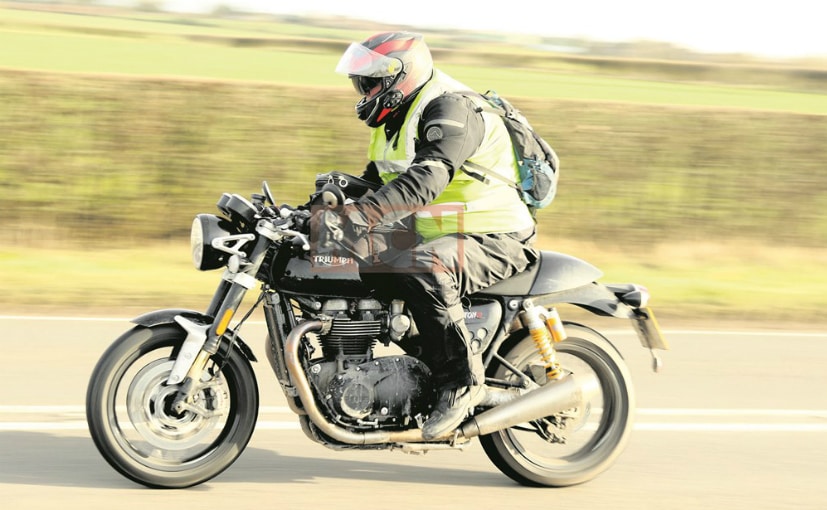 Triumph Motorcycles may be getting ready to introduce a 'Black' variant of the Triumph Thruxton R. Now, Triumph already has 'Black' editions of several of its Bonneville family models. There's the Triumph Bonneville T120 Black, the Bonneville Bobber Black and the Bonneville T100 Black as well, available in international markets. And these have typically 'blacked out' bits where you usually get gleaming chrome or aluminium. Now, a spy shot of the upcoming Triumph Thruxton R Black has emerged. The image in question has reportedly been clicked somewhere near Triumph's headquarters in Hinckley, UK.

The Thruxton R Black also gets the blacked out treatment, with black coatings over the wheel rims, engine covers and cylinders, as well as replacing the gold finish on the Showa Big Piston forks. The headlight seems to be new as well, and looks like it's borrowed from the Triumph Thruxton TFC with matching clear lens LED indicators. The brake caliper brackets have also been blacked out to go with the 'black' look, and from the looks of the finish on the clutch cover and silencer, Triumph seems to be testing the black coating on the components.

So far, there's now word on when the Thruxton R Black will be introduced. But this will likely be an European spec model and is unlikely to make its way to India. The introduction of LED lighting may mean that the Thruxton R Black may be a little more expensive than the standard Thruxton R. From the finish on the bike, it looks like Triumph is only a few months away from announcing the latest addition to the modern classic family - the Thruxton R Black.