A leaked document claims that the upcoming Kia will come four different powertrain choices, and 5 different transmission options. Furthermore, the SUV will come in both Tech-Line and GT-Line trims with multiple variant options. 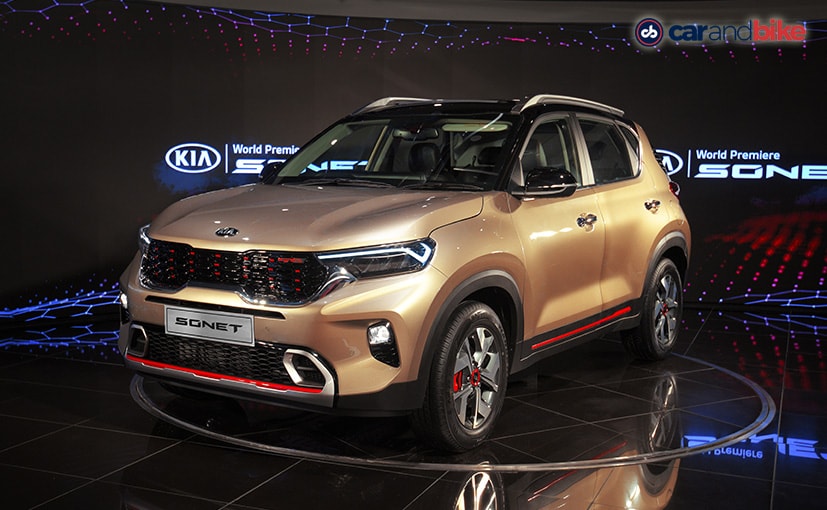 View Photos
According to the leaked information, the Kia Sonet will get the best-in-class 211 mm of ground clearance

The all-new Kia Sonet is set to go on sale in India in September, and ahead of launch, details about the subcompact SUV's dimensions and engine specifications have leaked online. We already know that the SUV will come in Tech-Line and GT-Line trim options with multiple variants, however, the leaked document also reveals that the SUV will also get four different powertrain choices. While the petrol version will include the 1.2-litre naturally aspirated motor and the 1.0-litre turbo-petrol unit, the diesel version will come with a 1.5-litre oil burner that will be offered in two different states of tune. All three engines have been borrowed from the Hyundai Venue. 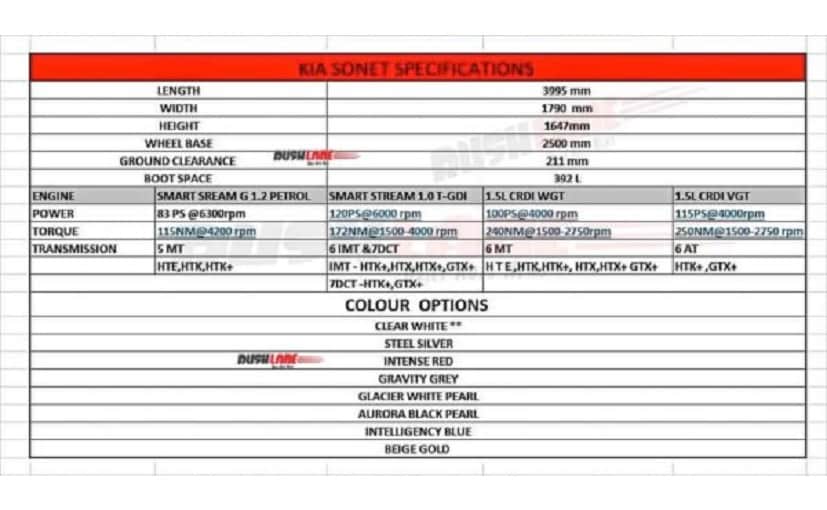 The 1.2-litre petrol unit is said to make 82 bhp at 6300 rpm and a peak torque of 115 Nm at 4200 rpm. Compared to the Venue, the engine offers slightly more torque, and the rpm range has also been increased. The engine will come mated to a 5-speed manual gearbox as standard and will be offered with the HTE, HTK, and HTK+ variants. The more powerful turbocharged 1.0-litre GDI engine will be tuned to make the same 118 bhp at 6000 rpm and 172 Nm at 1500-4000 rpm. Kia will offer three transmission choices with the engine - 6-speed manual, 6-speed iMT (Intelligent Manual Transmission) and 7-speed DCT automatic. The leaked document says that this engine will be offered with both Tech-Line and GT-Line trims, in HTK+, HTX, HTX+, and GTX+ variants.

As for the diesel engine, as we mentioned above, it will come in two version - 1.5-litre CRDI WGT (Waste-Gate Turbocharger) and 1.5-litre CRDI VGT (Variable-Geometry Turbocharger), and the Hyundai Venue, only gets the former version. In the Kia Sonet, the 1.5-litre CRDI WGT is tuned to make 99 bhp at 4000 rpm and a peak torque of 240 Nm at 1500 to 2750 rpm. The engine will come mated to a 6-speed manual gearbox as standard, and it will be offered with the HTE, HTK, HTK+, HTX, HTX+, and GTX+ variants. The 1.5-litre CRDI VGT engine is the same one that is offered with the Seltos, and it only comes mated to a 6-speed automatic torque converter unit. The engine makes 113 bhp at 4000 rpm and 250 Nm of peak torque at 1500-2750 rpm, and it will only come with the HTK+ and GTX+ variants. 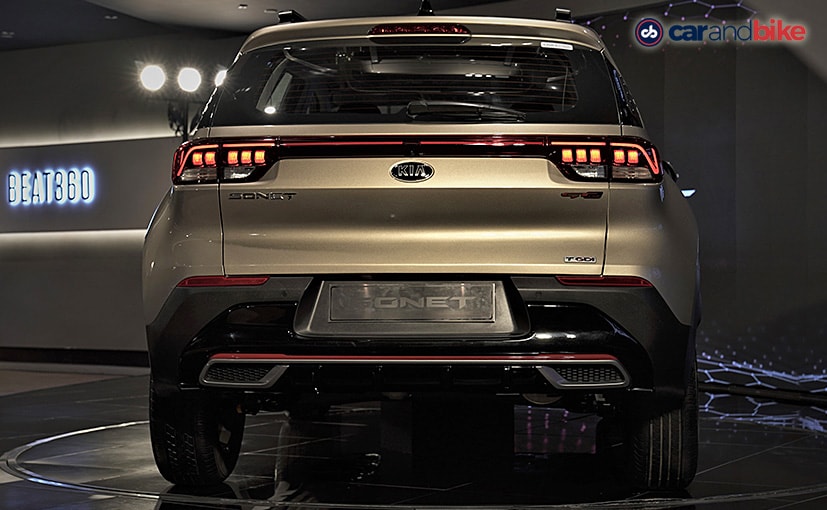 In terms of dimensions, the Kia Sonet will measure 3995 mm in length, 1790 mm in width, and 1647 mm height. This makes the Sonet the tallest among all subcompact SUVs, and second to only the Mahindra XUV300 with regards to its width. The Sonet comes with a 2500 mm wheelbase, which is at par with all other subcompact SUVs, however, the document reveals that it also comes with best-in-class 211 mm of ground clearance.

While official bookings for the SUV will start this month, several Kia dealers have already started accepting unofficial pre-bookings for the upcoming Sonet for a token of anywhere between ₹ 12,000 to ₹ 25,000. The Sonet is expected to be priced in the range of ₹ 7 lakh to ₹ 12 lakh (ex-showroom).