Along Came A Spyder: The Audi R8 Spyder Review 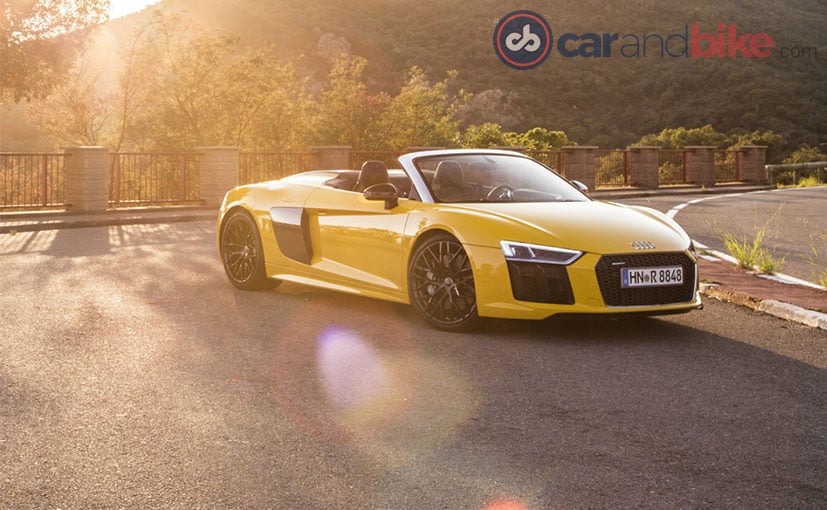 It is the latest mean machine from the four-ringed Bavarian stable, and is set to excite and exhilarate. The new generation Audi R8 Spyder is the topless or convertible avatar of the second generation of the flagship sports car, which launched last year. The coupe though is the V10 Plus while the Spyder gets the 'regular' new V10 - the expectation is that bot versions will acquire the other's engine soon enough in 2017. But let us stick to the car in focus shall we? I am in surprisingly cloudy Spain to drive and test the new car. The new R8 Spyder is - as Audi claims - faster, lighter, and more dynamic. And by its own admission while that sounds like an Olympic theme song, it is a claim I intend to test.

We picked up the cars at the Barcelona airport and immediately headed out into the countryside. The destination was northeast along the coastline to Costa Brava - a picturesque and stunning part of the world with craggy cliffs and a spectacular Mediterranean shoreline. Oh and more important for our pursuit - some wonderfully twisty and winding roads, replete with elevation changes and sharp blind corners. 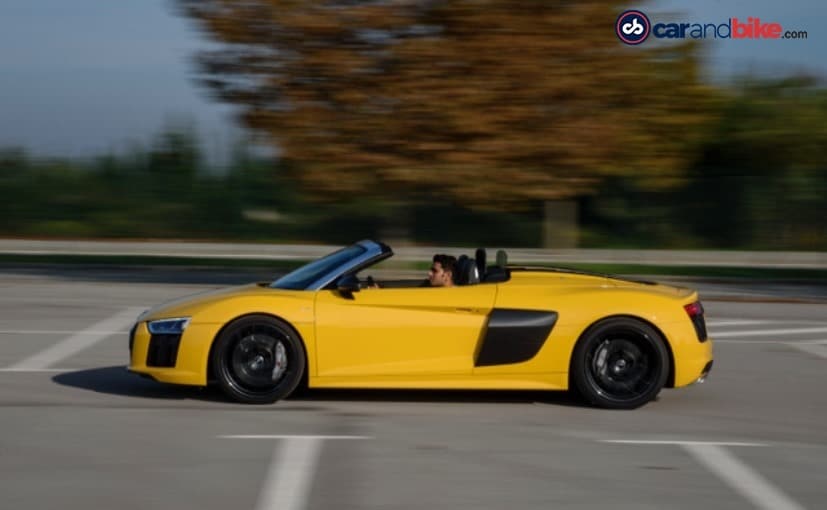 A great setting to test a car like this. For me - yes - as I genuinely believe the true test of a car like this is indeed on the open road and not merely on a track. The fact that it's a convertible just adds to that. Within seconds you realise that the car is brilliantly engineered, lithe and very agile. It is also German lets not forget, which makes it wild yet willing, mind-blowing yet measured, powerful yet precise. And that in a nutshell tells you that Audi has definitely gone the extra mile to indeed make the new Spyder a lot more capable and indeed efficient.

The company says that this isn't simply the R8 with its roof chopped off. Instead the Spyder was developed alongside the R8 LMS race car. 50 per cent of the components are shared with that car - and it uses the same drivetrain. That is the 532 bhp V10 that belts out 540 Nm of peak torque. The naturally aspirated engine uses a dual injection system. So it essentially has both the FSI and MPI technologies on board. The system injects fuel directly in to the combustion chamber or has an indirect injection into the induction pipe.

Audi says this helps increase efficiency and offer better performance too. The car goes from 0-100 kmph in 3.6 seconds and does twice that in 11.8 seconds. Top speed is 318 kmph. Further fuel saving is achieved by using both an engine start stop function and also cylinder deactivation - which sees one bank of cylinders switch off when there is less load on the engine.  At speeds above 55kmph - when you lift your foot off the accelerator, the S-Tronic opens both clutches, so the car casts at idle - minimizing fuel consumption too. Overall Audi says the new Spyder is therefore 12 per cent more fuel efficient than its predecessor. 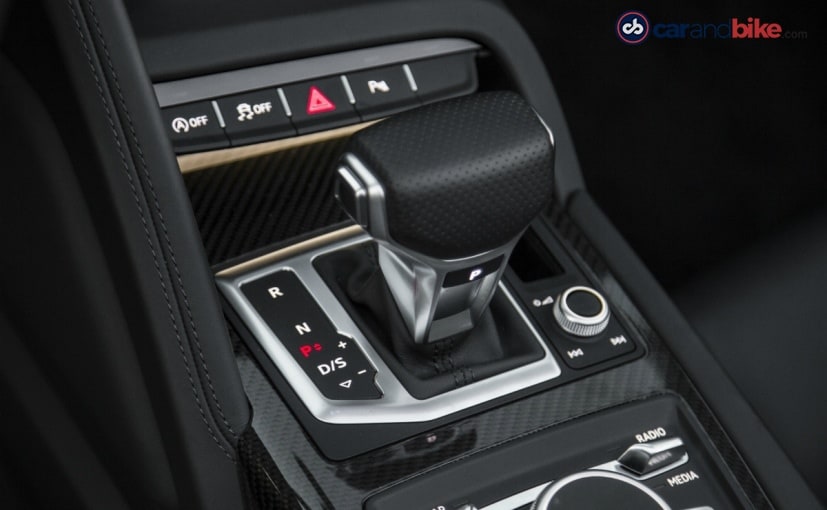 The Audi R8 Spyder gets the S-tronic transmission

The car also now gets the cooler motorsport inspired steering wheel like the new R8 coupe; and the TT RS. So you have the engine start button in red on the wheel, as well as the Drive Select button, and a sport exhaust activation button for that added roar. But along with them is an all-new Performance mode dial. While it limits the electronics that bridle the car, it also offers three modes for varying surface conditions - Snow, Wet and Dry. Needless to say I stuck to dry, but the car gets a bit of a mad character when you put it in Dynamic and switch on the Performance mode. You are suddenly very aware of the over 500 horses that will do you bidding, as well as the quick gearbox that snaps at your command at the flick of a paddle shifter.

Add to that the sport exhaust and boy was I in 7th heaven! The car roars, pops and crackles its way down the mountain roads, taking each sharp bend with precision and yet allowing the satisfaction of a little slippage. The steering is a delight - sharp, appropriately stiff and very responsive. Just thinking about the alacrity of the car and my deliriously fun drive up and down the winding Costa Brava roads is getting me as excited again. Am I gushing? No - that is not the intention, and I assure you I am not getting carried away. But that is where the R8 Spyder delivers. It's the right measure of mad and measured really - handles brilliantly and is just oodles of fun. 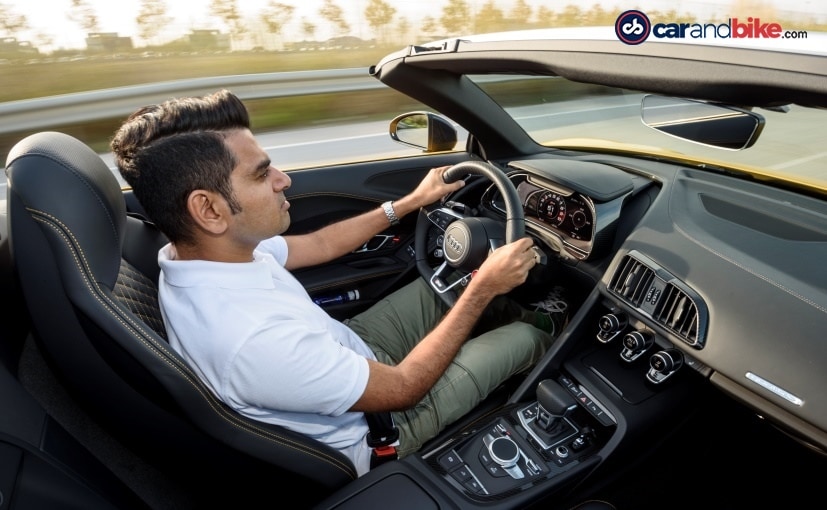 Its body structure is made u of significantly more carbon fibre, magnesium and of course aluminium. While all that reduces the weight, it also offers exceptional rigidity and stiffness. All while giving you tremendous composure too. Just the chassis alone is only 8 kgs heavier than the coupe's. The Spyder needs reinforcement in the A-pillar as also a roof system that can do the job well. This all means overall the car gets to be 80 kgs heavier than its roofed sibling. But that is still a remarkably small gap I have to say. That's again thanks to plenty of magnesium and aluminium in that roof system - that brings its weight down by 44 kgs. 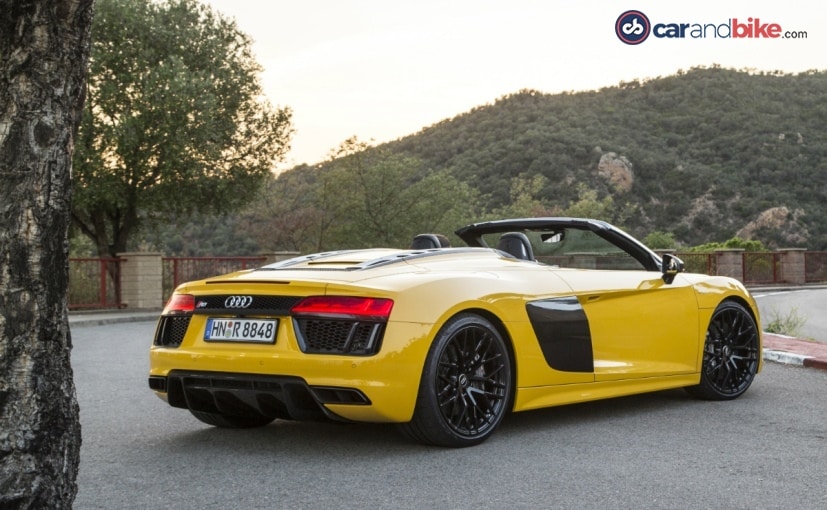 The system can fold the canvas top up or down in 20 seconds, can be operated at speeds of up to 50 kmph and what's more throws in a very convenient and thoughtful new attribute. The car's roof can be folded up or down with the key fob now. So you don't have to be seated inside with the ignition turned on anymore. At a cafe and it starts to drizzle? Not to worry as long as the car isn't too far from you just double-click and hold down the lock button and the roof will close. The opposite also works just as well by holding down the unlock button.

The car looks pretty solid - with its muscular frame and flanks accentuating its performance credentials. While the design takes off from the last generation's it offers its own unique style - especially at the rear. The use of LED lighting also gives t a sharper face and butt. While the car comes with standard 19-inch alloys, my test car has the optional 20-inch 10 spoke wheels finished in gloss anthracite black. Rather yummy though contrasting a bit much with the brushed metal finish given to the A-pillar and windscreen frame. The test cars on offer were in 4 paint shades, I picked the Vegas Yellow! And boy did it turn heads everywhere I drove. 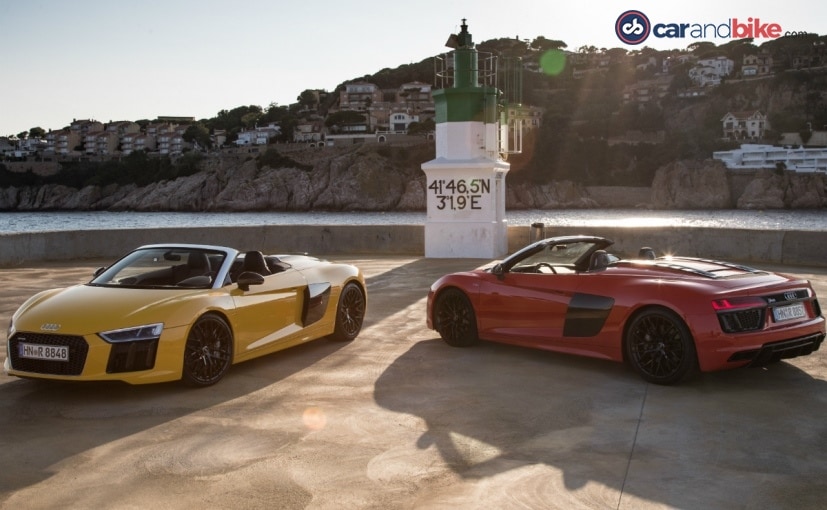 Audi R8 Spyder will be offered in 4 paint shades

I lost count of how many people took pictures of the car - even posing with it for selfies and such! The new sideblade - an almost defining character of the R8's design, incorporates a wider air intake and it can be customized in various finishes. It can also incorporate specially embossed lettering if the buyer so chooses. Inside the cabin the virtual cockpit is a given. That along with that new functional  steering wheel, paddles and well-contoured racing style seats - gives you quite the effective cockpit feel. Add to that the opulence of leather with stitching to match the exterior paintwork and you are in pampered performance nirvana! 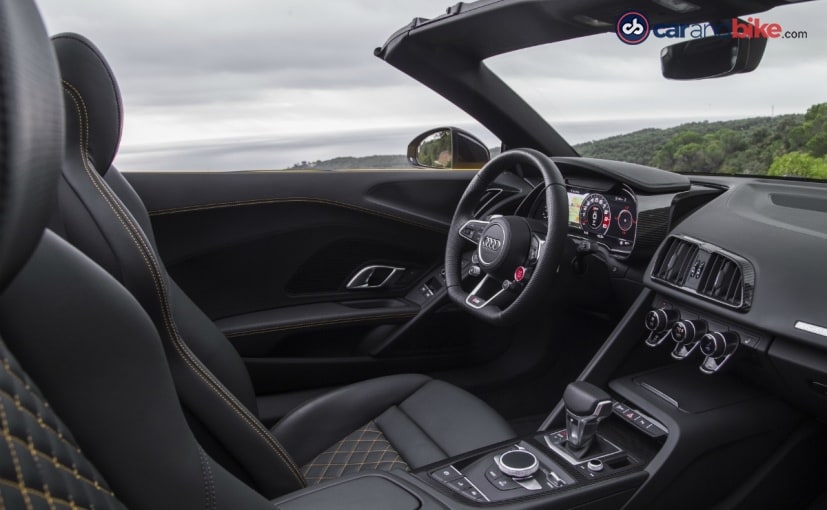 Audi R8 Spyder's cabin is similar to that of the coupe

The car also now has a new smartphone interface that incorporates Apple CarPlay and Android Auto. The optional (and expensive!) Bang & Olufsen sound system reeks opulence and drips with technology. 13 speakers in all with the subwoofer located at the bulkhead in the right front wheel well. The  woofers in the doors illuminated by LED accent lighting look funky in the dark. Two speakers are integrated into each of the headrests of both seats - and I have to say are very effective when the roof is open. 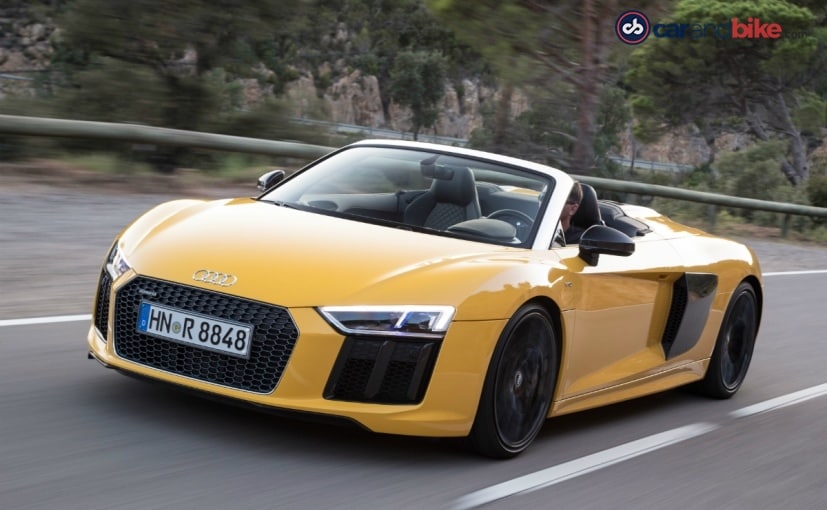 Whew! The car rolls out by the year-end in Germany and the USA, while it arrives in other markets around the world in late spring. And yes that includes our market too. Do I need to get into the crores it would cost you to buy one? Nope. Details like that aren't what this car is about. I do consider myself lucky to have got the chance to get into one soon after its broken cover. The drive will stay with me for some time. The flashes of yellow, the screaming engine as I go through tunnels and entertain motorists I am overtaking, and the sheer pleasure of attacking the road with clinical precision, yet absolute abandon - ah now that is what I will dream of tonight, and perhaps tomorrow night, and the next night - well, you get the picture!