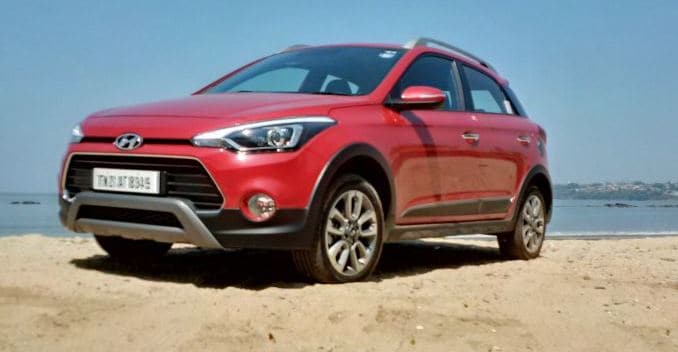 Hyundai's i20 is now available in a more, let's say, 'ACTIVE' avatar. The i20's new body style is a crossover hatch that the company believes will add even more volumes to the already popular model's kitty. Now, the cross segment of vehicles in the Indian market hasn't really taken off as expected but the entry of the Hyundai i20 Active will sure stir things up. They are calling this a sports styled vehicle and not going with the cross terminology with not just beefed up looks and increased ground clearance but also new features on the exterior and the interior that give it a bit more sportiness. That's what really works for Hyundai by offering a feature-rich package. Yes, some of them gimmicky but does make the competition look pale in comparison.

You immediately get to see the taller stance of the car especially from the side as the ground clearance has been enhanced by about 20 mm compared to the hatch. At 190 mm, it doesn't match up to that of the Fiat Avventura (205 mm) but certainly more than the Cross Polo (174 mm) or the Etios Cross (170mm). The taller stance does provide the Active a differentiation from the i20 hatch.

The styling does work for me and isn't too over the top with the aggression. The usual cross elements like the, body cladding across the car, hard plastic bull bar and the roof rails are there along with the new DRL projector headlamps with the cornering fog lamps. The new design on the 16 inch alloy wheels offer strong appeal but the fuel cap in a light silver finish doesn't necessarily work. Now we did check on what you guys thought of the styling and most of you clearly felt that the Fiat Avventura was the most attractive car in this segment! I do think the i20 active comes a close second! The big round fog lamps on the front and rear bumpers are attractive and the cladding on the waistline is a bit broader than what you see on the hatch to give it a rugged look. That C-pillar is now glossy instead of the plasticky one used in the hatch which we really weren't very fond of anyway. All the extra cladding means that the i20 Active weighs about 15 kilos more than the hatch! Despite our hopes, Hyundai hasn't upped the power on this variant.

The petrol engine is the same 1.2 Kappa 5 that we all know well and is married to the 5 speed manual box, while the diesel is the U2 CRDI but has an extra 11% burst of torque added in as compared to the hatch. That's the car we drove around the roads in Goa. With the Fiat Avventura, the increased ground clearance had impacted overall handling but the Hyundai i20 Active managed to handle fairly decently in straight line or around corners. The tweaked suspension works well to give you a fairly comfortable ride even over large potholes. But the steering could use with a bit more heaviness to give you that true sporty ride feel. The car does handle well enough but there is some body roll that creeps in on cornering. Gear shifts are quick and the engine lag isn't perceptible.

It gets a very similar looking cabin to the i20 hatch - but don't miss the orange highlights in the otherwise all-black interior. Now does that splash of orange work? Well yes - given the youthful appeal of the variant, especially on the gear lever and on the seats! i20 Actives with white and silver paintwork get blue highlights inside, by the way. 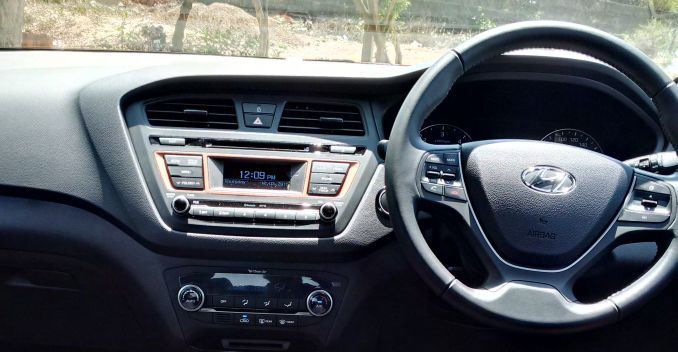 The boot space stays the same as the hatch at 285 litres. Other features include sporty aluminium pedals, reverse camera with steering adaptive display on the rear view mirror, automatic climate control and push button start. But do note that some of these features will be available only on the top-end diesel trim and is unlikely to be offered in the petrol variant and that's quite a shame really! The i20 Active will be launched in 5 variants - 2 petrol and 3 diesel variants. The base petrol variant will not get ABS or airbags, but the top end petrol models gets ABS with EBD plus dual airbags. The base diesel trim gets only ABS, the mid trim gets ABS with EBD with driver airbag and the top end gets dual airbags.

The car will be launched on March 17th and expect Hyundai to price the i20 Active attractively at a 50000 - 70000 rupee premium over the top-end model of the hatch, for which prices start at 5 lakh 23 thousand rupees, ex-showroom Delhi.