We spent a day wrestling the Sherco-TVS rally and enduro bikes on the sand dunes of Merzouga, in the Sahara desert. 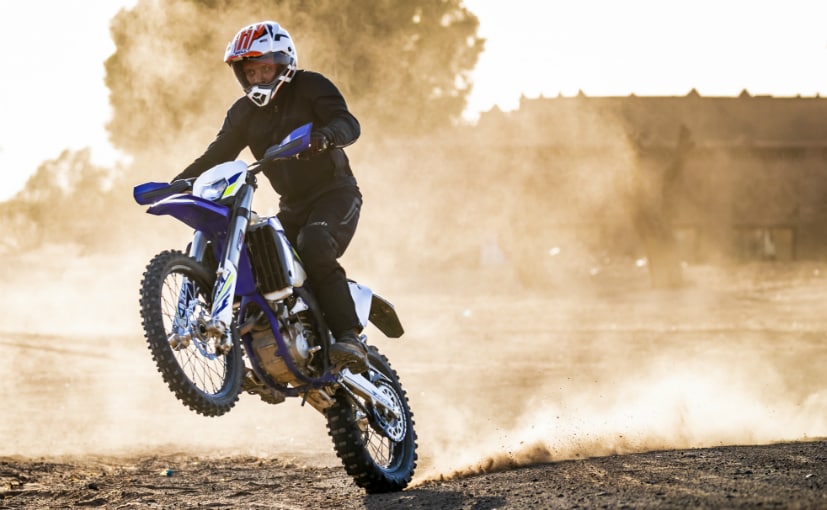 The closest to a dirt bike that I have ever been to was on a first ride experience with TVS Motor Company last year, on the Sherco TVS RTR 450 FX, the rally-spec 450 cc dirt bike. That ride introduced me to the first taste of what a true-blue off-road bike is capable of, riding skills notwithstanding. But this time, it was different. We were invited to Morocco, and the idea was to sample some of the enduro and rally bikes the Sherco-TVS Factory Rally Team uses in competition events, including several rally raid events in Europe and closer home like the India Baja. And we were going to ride the bikes not on 'normal' off-road trails, but on the actual desert, at no less than the dunes of the Sahara! 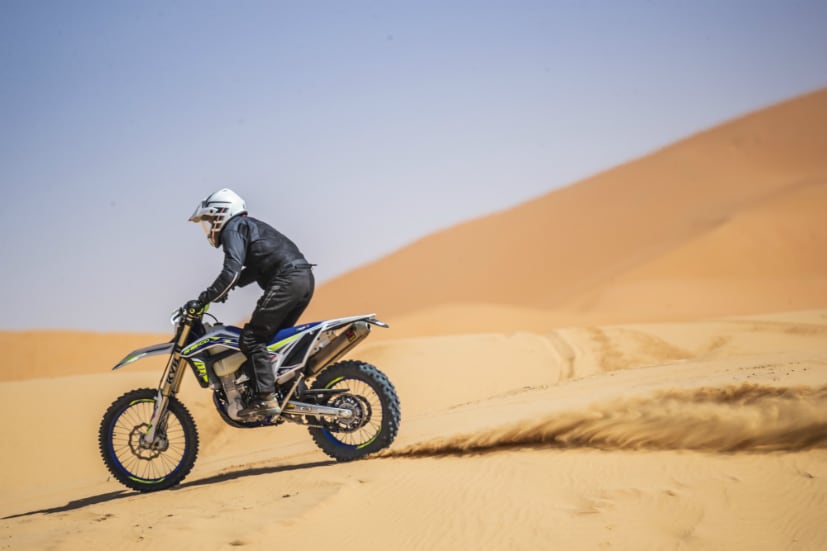 The Sherco-TVS factory rally team invited a bunch of us journalists to hop across the world to Casablanca, and then a van ride over nearly the course of a day across Morocco to where the real stuff begins - the Sahara! And we were going to ride a range of Sherco enduro and rally bikes on (you guessed it) the deepest sand and the tallest dunes I have ever walked on, let alone ride a motorcycle on! Now, riding on deep sand is not what one is accustomed to, at least not what I'm exposed to, or have much experience in.

For me, no amount of trail riding has exposed me to riding on deep sand. The few times I have had some exposure to riding on sand, and that too, on road-oriented tyres, the only skill I learnt is to gas out and let momentum help out. Slowing down, stalling, or even trying to crawl through sand is not an option. The biggest lesson learnt so far was that deep sand should be best avoided. When we rolled into Merzouga, in southern Morocco, a whole range of bikes were waiting for us, ranging from the Sherco 300 enduro bike, to the Sherco 450 Rally, 450 Rally Lite and the big daddy of them all, the Sherco 450 Dakar! And this is the bike the Sherco-TVS Factory Rally Team members will be riding at the 2019 Dakar Rally! 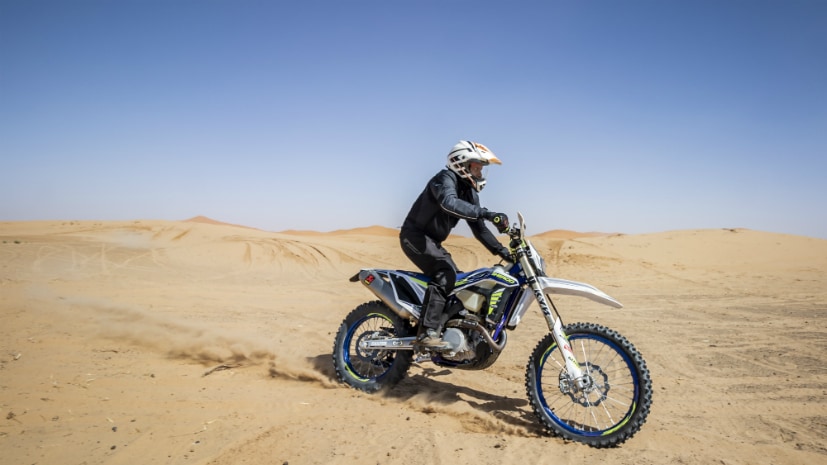 The first outing was for three of us journalists, led on by a Sherco Rally Team member into the dunes. I first got a taste of the 450 Enduro, and as we got into deep sand just where the dunes began, it became immediately clear that riding on sand is no pushover. The bikes were fitted with proper off-road knobby tyres, but even then, it was a struggle to find traction and follow a line through the sand. The 450 Enduro is around 120 kg heavy, and the single-cylinder, four-stroke engine puts out around 115 bhp of power. It's more than enough really to power out the light bike through sand and crest the dunes. After what seemed like eternity, wrestling the bikes through the deep, soft stuff, it was time to head back to the pits. 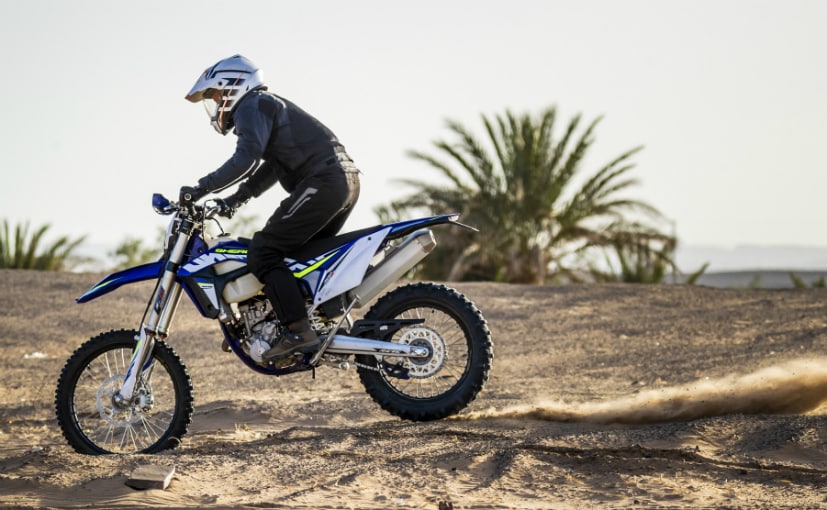 Small relief this, considering how exhausted we were from just a quarter of an hour of riding in sand. To realise that professional rally riders traverse thousands of kilometres over such terrain in one single stage certainly deserves merit and respect, and it added more realisation to how out of shape physically I was. There was no stamina, and the sight of the bivouac was a welcome relief, as we headed back, to rehydrate and hand over the bikes to the next waiting group. After a few minutes of rest, it was time to head out again, this time with me piloting the Sherco 300 Enduro. 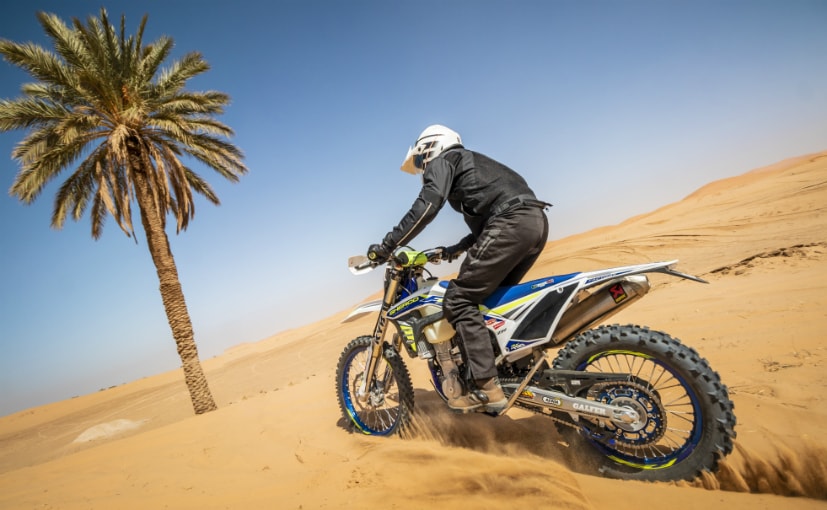 The 300 is lighter than the 400, just around 100 kg, and feels easy to manoeuvre. But compared to the 450, the 300 feels twitchy in the sand, and requires even more physical endurance. Tailing the Sherco Rally Team rider was certainly worth the help, because if we were to have given a free run, it could have been a lot of bikes stuck on sand, and probably more than a couple of us tumbling on the dunes. By the second outing, most of us were out of steam, out of breath, and needed to take a break, before it was time to head out again. 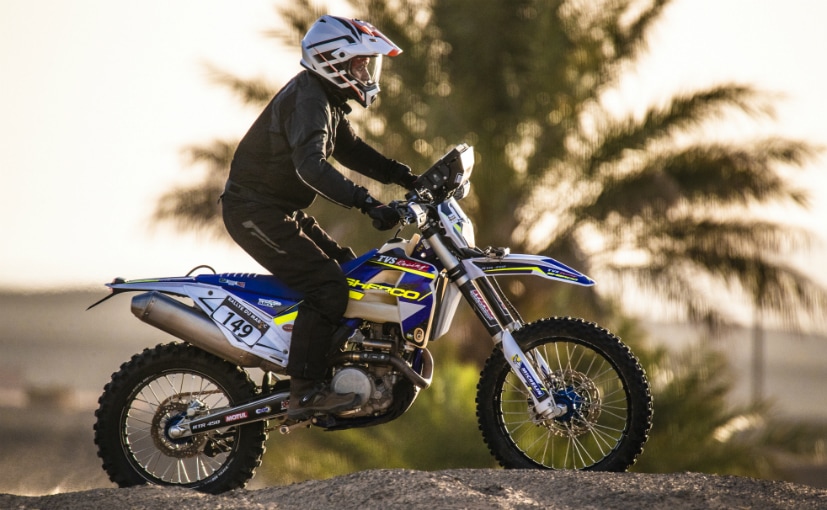 The 450s feel a lot different than the 300. The longer travel suspension, bigger engine, and more power make things a lot easier to power out of deep sand. My favourite is the 450 Rally Lite, which has a slightly different state of tune, and top-spec WP suspension, including a navigation console with the roadbook and navigation screen mounted high up above the handlebars. The afternoon was spent, riding the low dunes, and some hard packed dirt on the edge of the desert, and this is more like terrain one is used to, and despite the exhaustion, it was an extremely enjoyable time with the bikes. 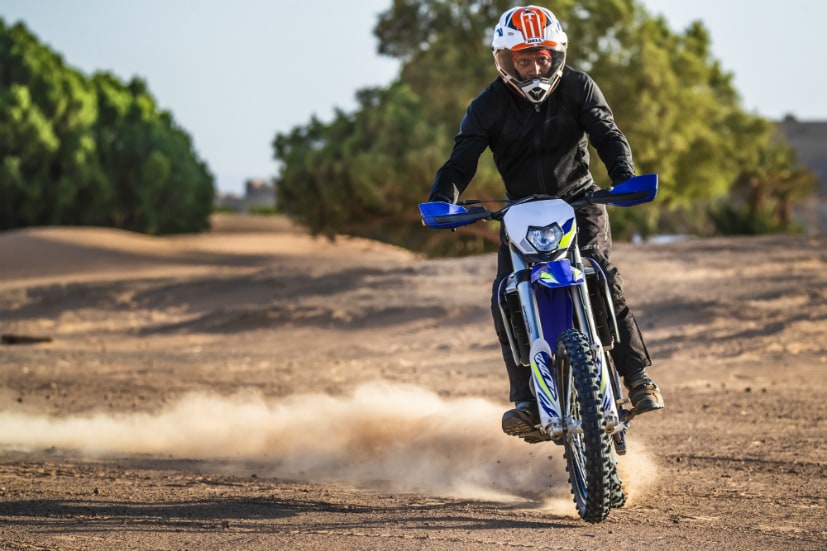 The throttle response on the enduro and rally bikes is crisp and immediate, so a little extra gas, and you will have the rear knobby digging in, and the front lifting up and carrying a fair bit of the way. Kicking out the rear is easier said than done, but the extra traction from the knobby tyres always keep you confident, with the knowledge that sliding out of control will only happen if you're foolish, or a little too adventurous. 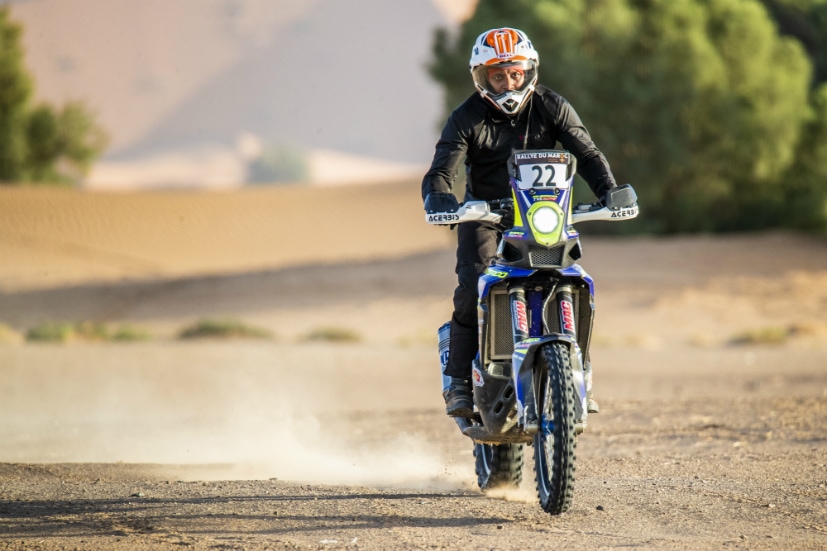 The Sherco 450 Dakar will be piloted by Aravind KP, Adrien Metge and Lorenzo Santolini at the 2019 Dakar Rally

Eventually, it was time to meet the Sherco 450 Dakar. It's a 450 cc single, completely rally-spec, 52 mm front forks with about 300 mm of travel. And it weighs just about 125 kg, and though no race team will disclose the output, we were told the 450 Dakar makes around 60-62 bhp of power. The engine components are different, the tuning is different on the 450 Dakar, and with the tall and imposing stance, the 450 Dakar feels like a big ship compared to the 450 Enduro and even the 450 Rally Lite. It also gets a bigger fuel tank, and a more comprehensive instrument and navigation panel. Our time with the 450 Dakar was brief, and with the constant fear of dropping the very expensive rally bike, it was time to hand it back. 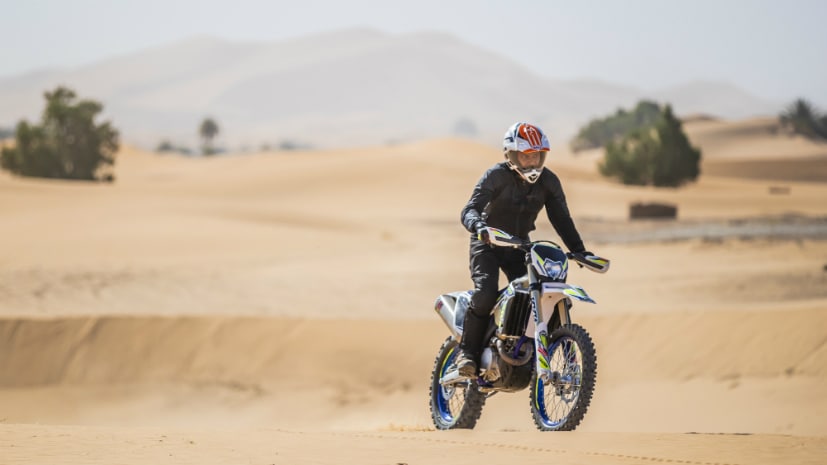 The desert experience with the Sherco TVS rally and enduro bikes was a one of a kind experience. And it was an experience on the kind of bikes which are purpose-built for competition rally raid events. It's unlikely that any of these bikes will ever be launched commercially, at least, in India. The desert experience not only exposed us to how physically demanding riding in a rally raid can be, but also to combine that with constantly looking at the roadbook and navigation, it's unfathomable how the Dakar heroes manage to do it, year in, and year out. A day in the dunes of the Sahara gave us a small peek into how difficult it is, just to participate and complete any international rally raid. To actually finish on the podium will be another game altogether!