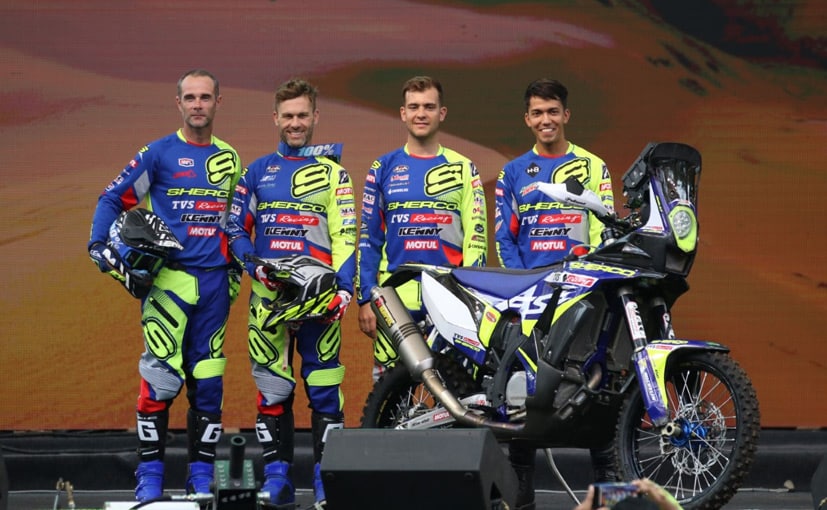 Sherco TVS Rally Factory Team has announced its four rider squad that will be participating in the 2020 Dakar Rally. The team includes seasoned racer Michael Metge of France, Enduro Champion Lorenzo Santolino of Spain and Johnny Aubert of France, along with India's ace rider Harith Noah set to make his Dakar debut next year. The announcement was made at the maiden edition of TVS MotoSoul in Goa, a congregation of owners and biking enthusiasts from across the country. The 2020 Dakar Rally will be held between January 5-17 next year, in Saudi Arabia for the first time, shifting base from South America.

The Sherco TVS Rally Factory Team has had an impressive year with strong performances across international events including the Merzouga Rally, Desert Storm, Baja Aragon, and the team aims for a strong finish at Dakar. It is one of the most gruelling rallies in the world and the new terrain will make it even more challenging for participants as they cross unknown landscapes, and overcome navigation challenges. The 42nd Dakar Rally will commence from Jeddah passing through Riyadh and culminating at Al Qiddiya. This is Sherco TVS' sixth consecutive show at Dakar.

For the riders, it will be chance to claim the title once again in one of the most demanding rallies across the globe. Lead rider Michael Metge will be making his seventh outing at Dakar in 2020, while Lorenzo Santolino will make his appearance at the Dakar Rally. Frenchman Johnny Aubert only recently joined the team, but has 35 years of racing experience and finished sixth in Dakar 2018.

India's Harith Noah has shown his mettle in several domestic and international rallies in recent years and is a promising rider to look forward to. However, Noah will be the only Indian rider this year from the team. Aravind KP, who completed Dakar for the first time last year finishing 37th overall, in his third attempt; but sustained a leg injury earlier this year and will not be able to participate in Dakar 2020.