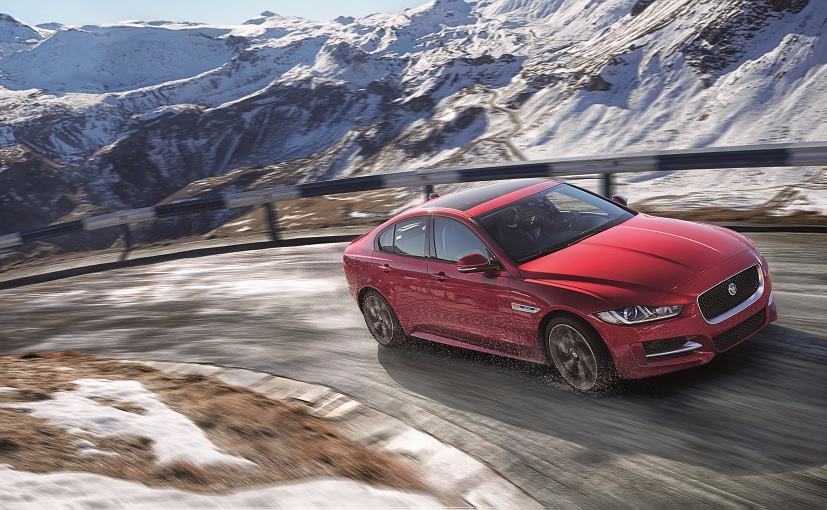 The new Jaguar XE sports saloon has been officially launched in India with prices starting at ₹ 39.90 lakh (ex-showroom, Delhi) at the 2016 Auto Expo. The most attainable offering from the car maker rivals the likes of Mercedes C-Class, BMW 3-Series as well as the Audi A4 in the segment offering the highly appreciated styling coupled with frugal yet powerful engines on board.

Measuring 4672mm in length, 1850mm in width and 4672mm in height with a wheelbase of 2835mm, the Jaguar XE is based on an all-new monocoque platform made of 75 percent lightweight aluminium that helps in extensive weight savings. The car also gets a sophisticated suspension with a double wishbone setup at the front and an independent integral link system at the rear, translated from the bigger models.

0-100 km/hr is achievable in 7.7 seconds on the petrol, while the diesel does it in 7.8 seconds. The top speed is rated at 228 km/hr on the diesel while the petrol version can pushed till 237 km/hr. The styling has been highly appreciated for the bold front fascia inspired by the larger XF and XJ saloons, while the rear gets the extremely beautiful F-Type inspired tail lights.

The interior compliments the design further with the body hugging front seats, large centre console and dual tone finish. The cabin is decked up with features including the new InControl Touch Pro infotainment system, navigation, Head-up display unit, 825W Meridian audio system with 17 speakers and a whole lot more. You also get a panoramic glass roof on the sports saloon while the boot capacity stands at 485-litres.

The Jaguar XE is equipped with several electronic aids including Blind Spot monitor, Advanced Park Assist and a surround camera system. You also get autonomous emergency braking, lane departure warning, lane keeping assist as well as adaptive cruise control. Bookings for the new XE commenced last month and deliveries will begin immediately after launch. The model is being brought as a CKD being assembled at the Chakan manufacturing facility.

F1: Mick Schumacher Confirmed To Drive For Haas In 2021
12 minutes ago

Nissan Magnite Is The First Sub Rs. 20 Lakh Car To Get Wireless Apple CarPlay & Android Auto But Is It A Big Deal
6 minutes ago

Honda Announces Year-End Offers Of Up To Rs. 2.5 Lakh On Its BS6 Cars
13 minutes ago

F1: Mick Schumacher Confirmed To Drive For Haas In 2021
21 minutes ago

Ex-showroom Price
₹ 95.12 Lakh
EMI Starts
₹ 1,97,453 9% / 5 yrs
Get On-Road Price Check Reviews
Subscribe to Our Newsletter
Over 1.5+ Lakhs subscribers
Thank you for Subscribing to Us