Is the Suzuki DR Big finally nearing production? Spy shots have revealed a new Suzuki adventure bike, but it's still not clear if it's an updated Suzuki V-Strom or if it will be the Suzuki DR Big. 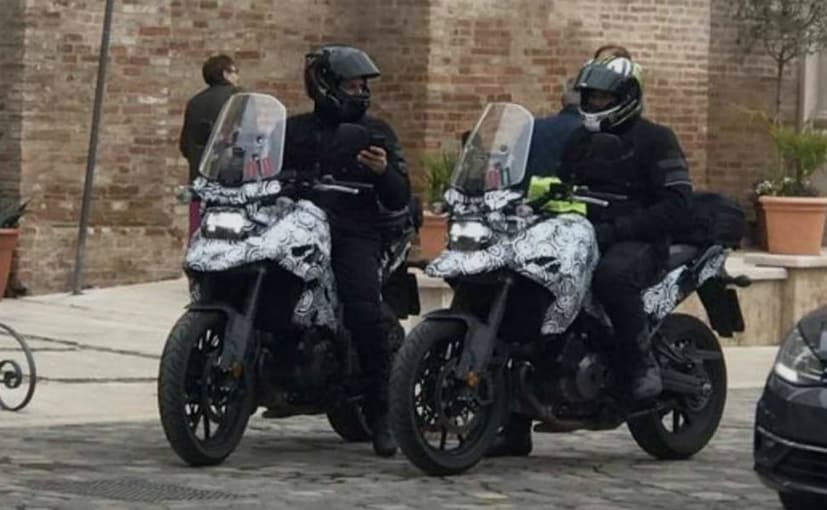 Suzuki's upcoming big adventure bike, apparently the rumoured Suzuki DR Big, has been spotted while undergoing test runs in Italy. The DR Big name was a big thumper from Suzuki (with a massive 779 cc, single-cylinder engine) from the 1980s and '90s, and rumours have been going around for some time now that Suzuki is all set to revive the DR Big name with a new adventure bike. So, the latest spy shots have sparked more rumours that the DR Big name may be making a comeback in production form sooner than expected. While popular expectations were that the DR Big will have more off-road capability than the V-Strom series, the spy shots reveal few details which make this prototype a true-blue off-road adventure machine.

Also Read: Suzuki DR BIg May Be Launched In 2020

The spy shots reveal two adventure bikes covered in camouflage, and what is apparent is the v-twin engine, beak, front fender, chain transmission and swingarm design which seem familiar, like Suzuki's current V-Strom 1000. A tall windscreen with a rectangular headlamp sporting full-LED lighting certainly underlines the bike's touring intent. But whether it's actually the new off-road oriented adventure bike with the DR Big name is still a matter of conjecture. Suzuki is rumoured to have been working on a new DR Big with more off-road capability, considering the V-Strom models are more tarmac tourers than with any real off-road pedigree. But the spy shot of the new bikes don't reveal too many features which lend real off-road capability to the camouflaged bikes.

For starters, the ground clearance isn't that high for any real off-road duty, and there's no engine bash plate either. To top it all, while we were all expecting spoked wheels on the DR Big, the test mules on the spy shot seem to sport alloys, so instead of the off-road ready, the new bike on test could just well be an updated Suzuki V-Strom 1000. Either ways, a new Suzuki adventure bike is coming, and a near-production model is likely to be revealed soon, considering the test mules seem to be advanced prototypes.