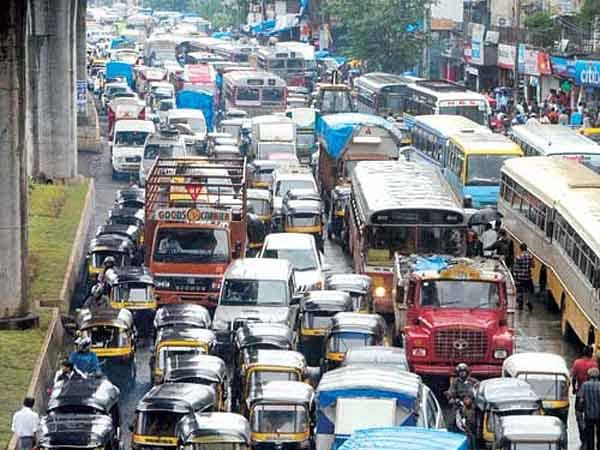 We've all been late for meetings, exams, flights, movies, family functions and majority of the time we've blamed traffic conditions in our cities. Then we start blaming the lack of infrastructure and the ratio of cars on road to their narrowness and then suddenly it starts making sense. But then again we start thinking about other countries like Russia, Indonesia, the US where rush hour traffic is just a part and parcel of life, and we say to ourselves we're better off.

But if you look at the latest database of Numbeo, a website that collects global statistics including costs of living, crime rates and pollution indices, among others, you come face to face with reality and that is seeing three Indian cities in the top 10. The cities include Mumbai, Pune and Kolkatta.

The ranking is arranged based on a combination of factors, including the average time spent by a commuter on a one-way trip. Traffic Index which is a composite index of time consumed in traffic due to job commute, estimation of time consumption dissatisfaction, CO2 consumption estimation in traffic and overall inefficiencies in the traffic system.

Then comes the Inefficiency Index which is an estimation of inefficiencies in the traffic, with high inefficiencies it assumes driving, long commute times, etc. It is meant to be more measurements of economies of scale in traffic and finally the CO2 Emission Index which is an estimation of CO2 consumption due to traffic time. Measurement unit is grams for the return trip. To calculate an average estimation of emission in grams for one way commute to work, divide this value with 2.

So, if you take a look at the chart, you can see Mumbai topping the list with Pune in 3rd place and Kolkatta in 5th. According to the index, it takes a person an average of 66.18 minutes to reach his/her destination in Mumbai, 60.82 minutes in Pune and 58 minutes in Kolkatta. There are other cities too in the list. Bangalore is in 19th place, Coimbatore in 21st and Delhi in 23rd, Hyderabad in 25th, and Chennai in 49th. Even the CO2 Emission index in these cities is quite alarming.

Well, Numbeo also has a traffic index by country and this is where we breathe a sigh of relief as even after having 8 cities in the list, India finds itself 13th on the list as we are beaten by countries like Kenya, Russia and Phillipines.

This is just the base of the problem as it leads to other issues like road rage and even reckless driving, thus accidents. There is a need to address these issues and this table just shows the gravity of the problem we have on our hands.

Skoda Karoq Almost Sold Out In India
4 minutes ago