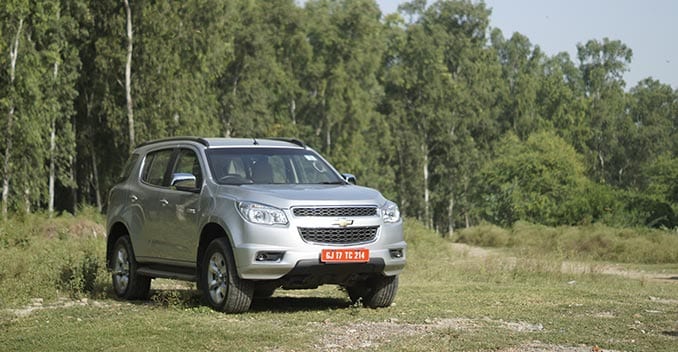 The SUV space has been a well contested segment with a whole bunch of players. There seemed to be a lull though because of product stagnation, probably, which left people wanting for more. Now there is enough and more in the pipeline like the next generation Ford Endeavour, the new Toyota Fortuner and even the Chevrolet Trailblazer.

The big, heavy and rugged SUV from the Chevrolet stable will replace the Captiva and will be launched in India during the festive season and will come prior to any of its other competitors and so has a good head start. In most of the markets the Trailblazer is available in two diesel engines and one petrol engine but India gets only one 2.8-litre diesel and surprisingly in only one variant.

So how does it look? We mentioned it's rugged, muscular and all that and it's thanks to the body-on-frame chassis that the SUV is built on. The front of the SUV sees, Chevy's traditional two-part grille which we have seen in Sail hatchback/sedan, the Beat and even the Spark. The front is flanked by sharp looking projector headlamps which are becoming common on almost every new or refreshed car that has been launched in the recent past.

The design gets softer when it comes to the side profile and there is not too much cladding as we see in SUV's these days. The car looks simple and not very aggressive, also at some point also reminds you of the car it's replacing - the Chevrolet Captiva.

However, there are more curves on the window which is a move away from the boxy looks of the car. The rear the car looks much like the Fortuner and while it works for many it does lack that individuality that we expected from this car. Despite the softer looks on the side the car looks sufficiently modern and well proportionate.

It carries many design cues that are typical of Chevy trucks, the design is less boxy and the overall length and width of the SUV is a bit more than the Toyota Fortuner and hence the car looks more muscular when compared to its rivals. Fortuner has a better height but surprisingly the 241mm of ground clearance on the Trailblazer is higher than that of the Fortuner which stands at 220mm.

The car's interiors are well laid out, the cabin is nice and wide, the black and beige interiors just gives the car that premium look that one would want while buying a car at this price point. It has a Corvette inspired 3 spoke sports steering wheel with mounted controls for audio and cruise control. The square instrument cluster with sunk in dials also gives the car that sporty feel while driving. It was nice to see AC vents in a distinct position and right between the vents is the 7 inch 'MyLink' touchscreen infotainment system with smartphone app link but sadly there is no place for a navigation system.

There is also a rear view camera with park assist and buzzer warning and while overall the dash and the interiors works well, we wished there were some better plastics used and a better texture given to the power-window switches. The piano black center console has a round climate control dial which gives a refreshing look to the car. The car's gear lever also gets some chrome highlights adding to that premium look.

It's comparatively very easy to get into the 3rd row seating by just pulling a small latch on the 2nd row seat and the seat almost folds up automatically with a gentle push. With the width of the car being more than that of the Toyota Fortuner there is good shoulder room too and it is also good to see GM India working on small things like the cup-holder as you get one for all the seats.

So, what's under the hood you ask? Well, GM India has decided only to bring the 2.8-litre Duramax diesel engine. India will not get the lighter 2.5-litre diesel or also the 3.6-litre V6 petrol engine and also what we miss out on is the all-wheel drive option. The 2.8-litre diesel engine punches out 200bhp and is mated to a six-speed automatic gearbox which powers the rear wheels. The car is a bit underpowered when compared to the Fortuner but then Fortuner also gets a larger 3.0-litre engine too. So, we aren't complaining.

The power delivery and initial gear shifts are smooth but at higher speeds you still want quick gear shifts and a bit low engine noise. The steering is responsive and you do feel its sporty side when driving down winding roads. The Trailblazer will be launched only in one variant and will have dual front air bags, ABS with EBD, Hill start assist, Traction control and hill decent control. We hope Chevrolet price its Trailblazer aggressively, after all, the global giant expects to change its trail to achieving some much needed fortunes in India.