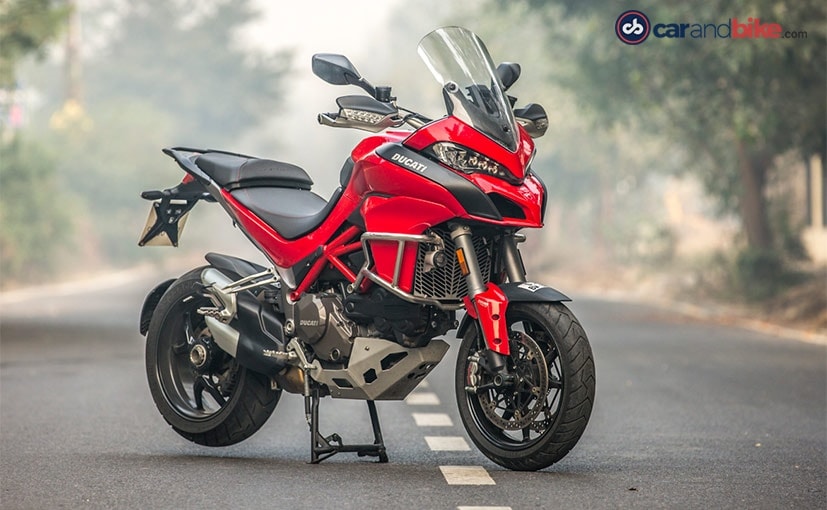 It is big! It is red! It can go SERIOUSLY fast and can also tour across the country with consummate ease. Ladies and gentlemen, behold, the Ducati Multistrada 1200 S. If there was a master of all trades, this motorcycle would have been it. Why such a generous opening statement? Allow me to elucidate as to why the Ducati Multistrada is worth every penny you spend on it.

If looks could kill

Take a few moments and gaze at the photographs of the Multistrada. If you are already impressed then wait till you see it in the flesh! It is a massive motorcycle. The front end, wrapped around in the fairing carrying those V-shaped LED lamps and those air intakes right below mean business. In true ADV fashion, the pointy, beak-like protrusion also makes an appearance, which, is an intimidating sight on the rear-view mirrors of any vehicle. View it from the side and the scooped out seat along with the bulbous yet sculpted fuel tank adds solid muscle to the motorcycle. Swing your sight to the rear and you will see the gorgeous 17-inch Y-pattern 3 spoke alloy wheel in its entirety, wrapped in chunky 190/55 R Pirelli Scorpion Trail II rubber. Single-sided swingarm on motorcycles have always fascinated me and this one too makes you fall in love with the Multistrada. Topping it off is the gorgeous red colour scheme, typical of Ducati motorcycles. Evocative in the truest sense of the word! Ever since it was first introduced, the Multistrada was a motorcycle with the very best of technology and this model too is no different. Ducati had always said that it envisioned the Multistrada as four different motorcycles rolled into one and made it such. The list of features begin with the TFT screen which is one of the most comprehensive instrumentation units around and can be configured to show different screens and it can adjust itself according to the lighting conditions or the riding mode selected. 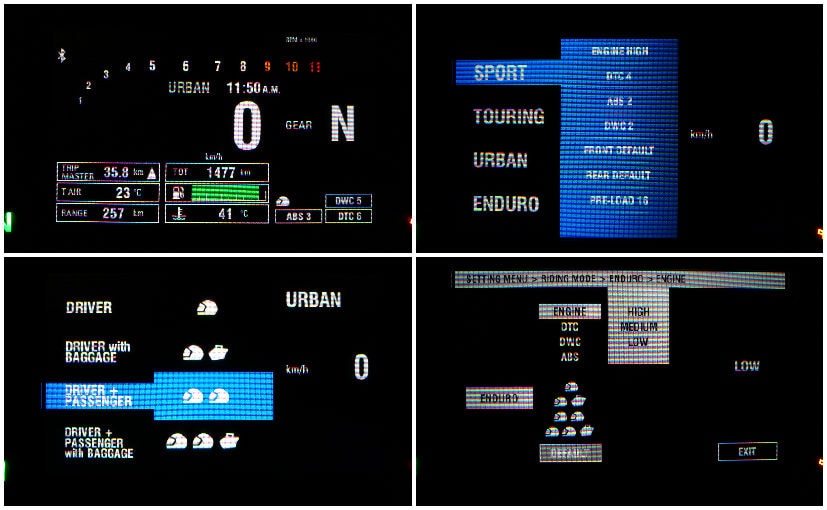 This brings us to the long list of electronics on offer. Starting off, the Multistrada gets four different riding modes (Urban, Enduro, Touring and Sport) along with 8-step settings for the Ducati Wheelie Control (DWC), Ducati Traction Control and ABS. Each riding mode has a separate default setting and can be customised as per the liking of the rider with respect to the engine output and delivery, suspension, electronic interference and so on. There is an option to adjust the suspension according to the load that the motorcycle will be carrying (rider, rider+baggage, rider+passenger and rider+passenger+baggage). Rounding up the electronics is the Inertial Measurement Unit (IMU) from Bosch, which can read roll rate, yaw rate, longitudinal acceleration, vertical acceleration and transverse acceleration and adjust the cornering ABS, cornering lamps, traction control, wheelie control and so on. Then, there is the hands-free ignition too along with the adjustable seat height. Simply put, the Ducati Multistrada 1200 S is way smarter than most of us. 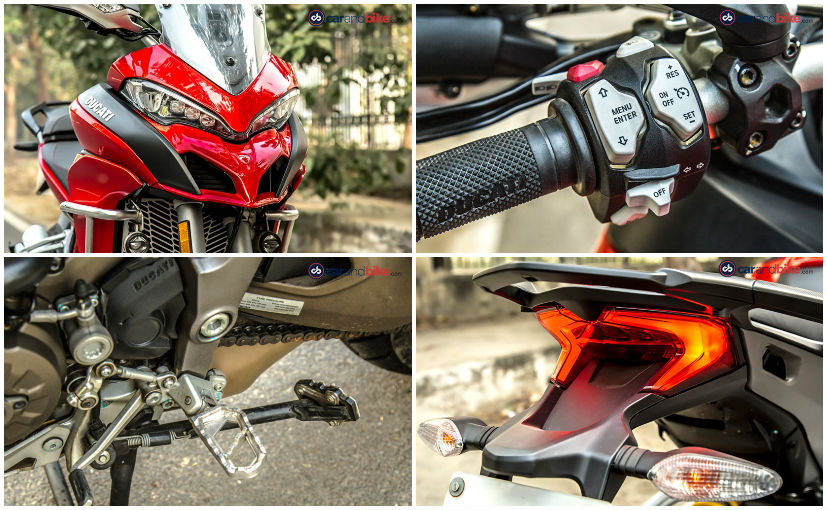 Apart from these electronic marvels, our test bike also came fitted with optional Touratech crash protectors on the fairing, bashplate underneath the engine, serrated footpegs, fog lamps and a shield for the radiator. Be advised, the optional kit can cost a bomb, but is definitely worth it.

The motorcycle is built around a trellis frame, which is the same as the earlier model. The front end gets 48mm Sachs USD forks while at the rear, there is an off-set Sachs monoshock coupled to Ducati's skyhook suspension system (DSS). Skyhook refers to the feel of the bike being suspended from the sky as opposed to riding on terra firma (Think Aladdin's magic carpet). With 200mm of travel at either end, the DSS EVO system, keeps adjusting the suspension according to the road conditions. 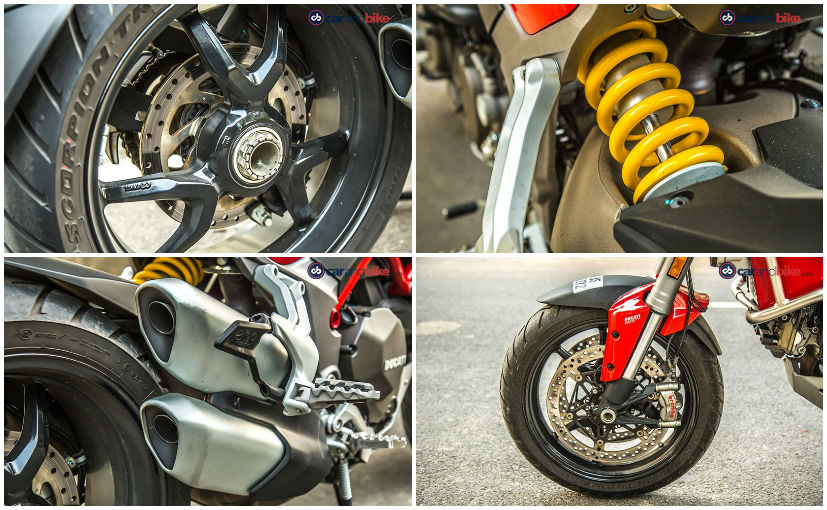 The braking duties are taken care of by 330mm Brembo discs upfront and a 265mm disc at the rear. The IMU sends the data to the Bosch ABS unit, providing solid braking even while cornering hard. All of this technical mumbo jumbo adds up to the fact that even with its kerb weight of 235kg, the motorcycle handles beautifully. Be it straights or twisties or even daily Delhi traffic, the Multistrada never loses its stride, filtering through the hullabaloo with so much ease that it ends up surprising you. The weight can be hardly felt on the move. With due respect to Indian road conditions, it is the Urban and Touring riding modes which make most sense. The Sport mode tauten things up and the suspension becomes too stiff for our liking. The Enduro mode, well, gives you the 'feel" of raw motorcycling and disconnects the ABS to the rear tyre.

We really wouldn't recommend you to go proper off-roading on this one as it is a sport tourer. Wait for the Ducati Multistrada Enduro review and we will tell you how it goes. 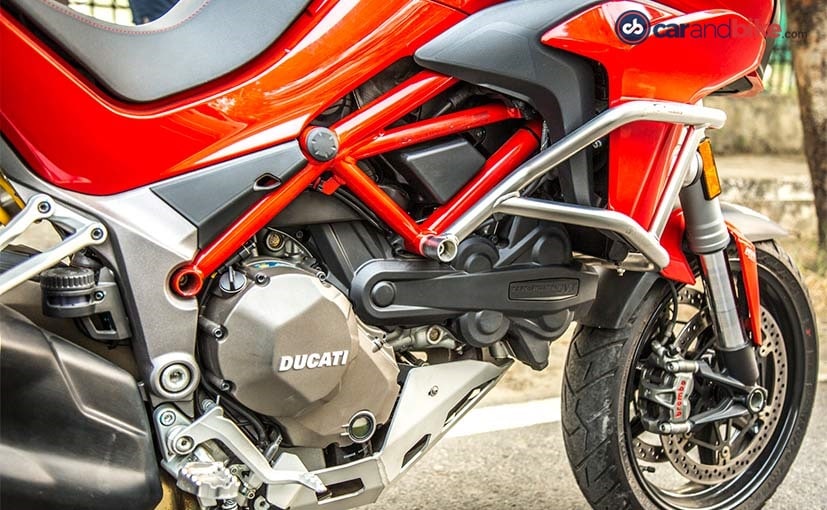 Getting the numbers out of the way, the Multistrada gets a Testastretta DVT (Desmodromic Variable Timing) 1,198.4cc, L-twin engine which belts out a maximum power of 160bhp@9,500rpm and peak torque of 136Nm@7,500rpm. It comes mated to a 6-speed manual gearbox. But what these numbers translate into is a gem of a motor that generates immense pulling power right from the bottom end of the rev range. The Sport mode unleashes all 160 horses with a super responsive throttle. The electronics too are set for minimal interference, which is where the fun begins. The Ducati Multistrada 1200 S is a manic beast. Its sheer ferocity scares you silly and you can feel yourself entering into a time warp, doing insane speeds before you realise what is happening. 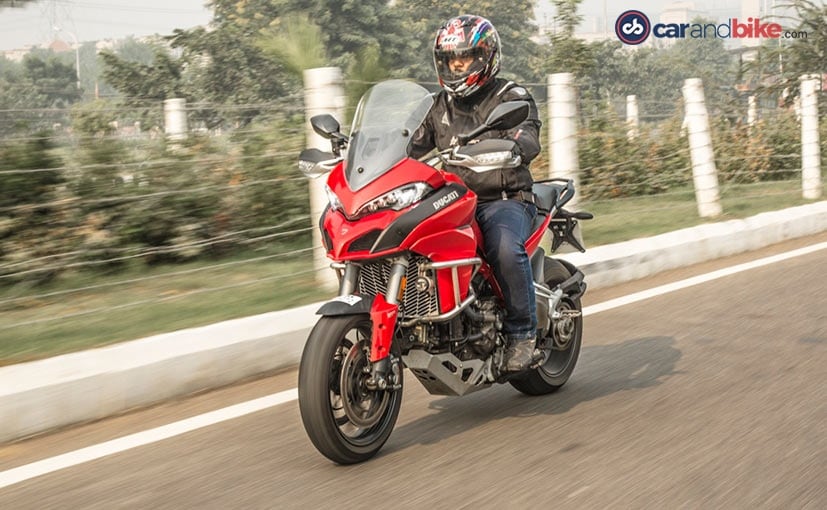 (The Ducati Multistrada 1200 S is a sweet handling motorcycle)

The strangely wonderful thing is that even at 180-200 km/h, the motorcycle is absolutely at peace, and can sit at those speeds all day long, without running out of steam. Don't ask me how I know this. And of course, it's advisable you only try those kind of speeds at a race track only (winks). The Touring mode too delivers all the 160 horses but makes it much more rider-friendly with the electronics cutting in more often. The Urban and Enduro mode keep the power tied down at 100 horses with even more intrusive settings for the electronics. I, for one, am still not able to figure out whether the Multistrada is an out and out sportbike posing as an ADV or an ADV which is also a capable sportbike. 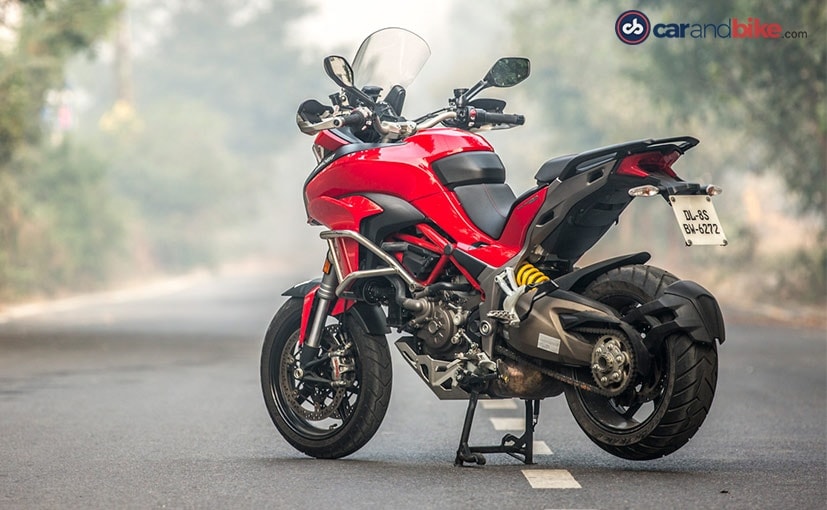 At a price point of ₹ 16.5 lakh (ex-Delhi), you get a motorcycle which can give you the adrenaline rush of a really, really, fast bike, ride long distances effortlessly, tackle bad roads with ease and even take on the traffic on a regular basis if not daily. The Multistrada 1200 S is great value for money and is not intimidating for the rider (for others, absolutely yes!). It is the perfect balance between insanity and practicality and as I wrote right at the beginning, a master of all trades.