When Honda launched the Amaze subcompact sedan, in India, back in 2013, it was targeting a segment that was rapidly changing and, in fact, had big players, in the market, already. Honda broke a few traditions too, through the Amaze, chief amongst which was a brand new diesel engine. There have been a couple of facelifts of the car, to keep it in the race; but the company had to do something drastic and at the 2018 Auto Expo, it showcased the new generation of the Amaze. Back then too, we told you all about the car, but now we got a chance to see it up close and spend some time driving it too.

Also Read: Honda Might bright a fully loaded CVT variant for the Amaze 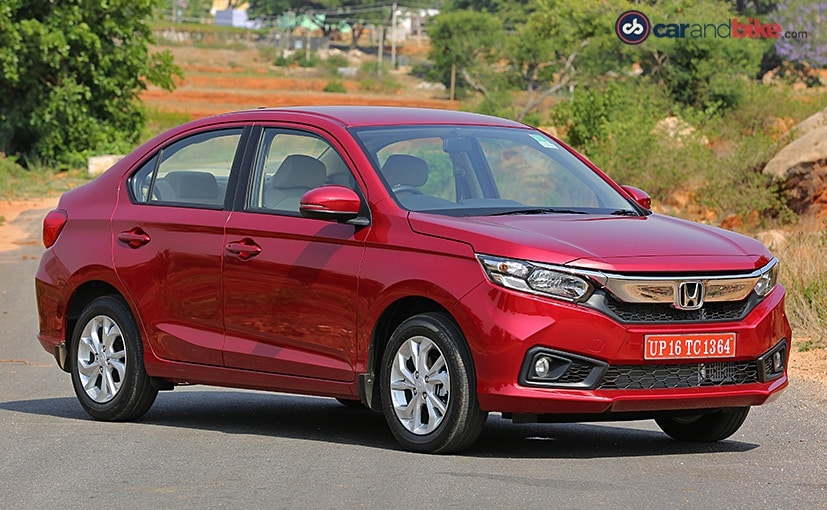 The Amaze is like a superhero, for Honda; and, an unlikely one at that. Sort of like Mr. Incredible, who's not your mainstream hero, but is equally effective and hence deserves a sequel. The second generation of the Amaze has earned its birthing, as Honda has sold 2.5 lakh units of the car, in the past 5 years. But, there's a lot that's happened, in that time, in the subcompact sedan segment, as Maruti Suzuki has just upped the ante, with the new Dzire; and Volkswagen, as also Ford are set to bring in their action models of the Ameo and the Aspire. Honda has its hands full, then, as it has had to look at every package the competitor has to offer and provide just that bit more, to make the Amaze stand out. 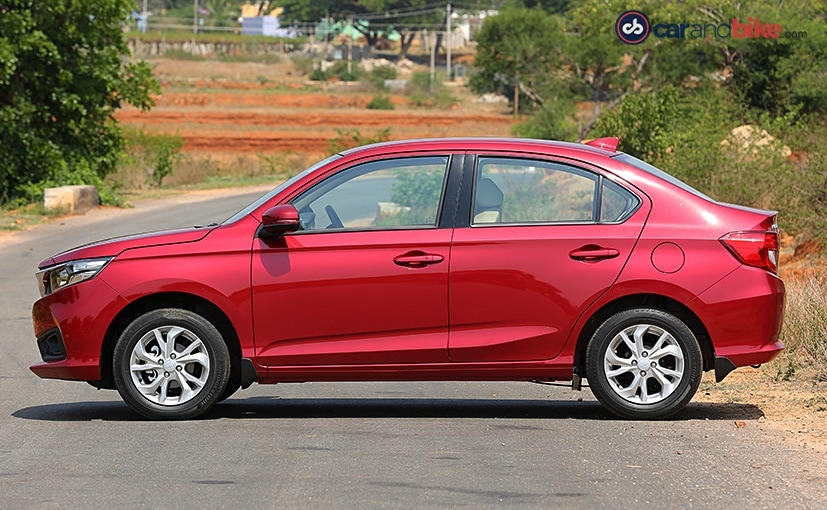 The new Honda Amaze is larger than its predecessor

Everything about the second generation Amaze is new, including the fact that it's based on a new platform. The subcompact sedan has grown in size, by 5mm, though it's still under 4 metres in length (3995mm) and it's wider too, by 15mm. The petrol powered Amaze is 17 kilos lighter than its predecessor; while the diesel version is 23 kg lighter. Thanks to Honda's 'Man maximum, machine minimum' philosophy, the front and rear wheels have been increased, by an impressive 65 mm, taking the total now to 2470mm. In fact, Honda claims there's an additional 25mm of space, between the front and rear seats now. The rear shoulder room is up by 45mm; while the headroom has increased by 10mm. The boot volume is also up, thanks to the revised dimensions and the new Amaze can now hold 420 litres of cargo, an increase of 20 litres. 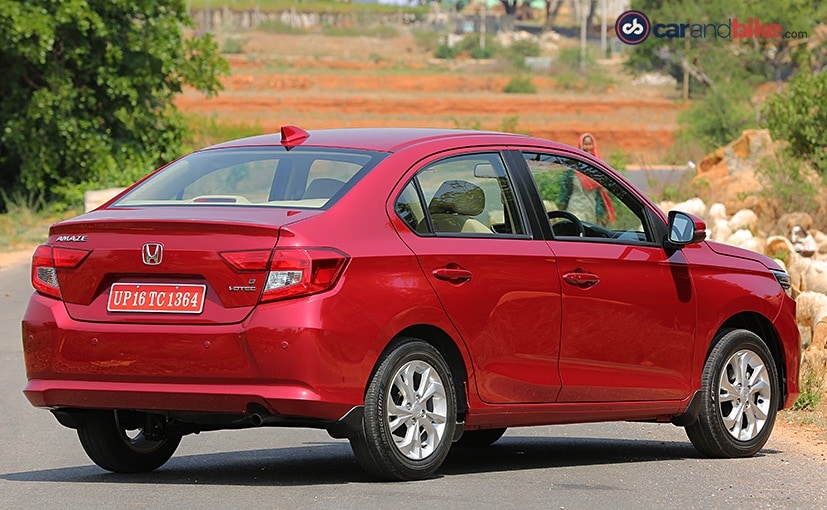 While all those numbers look great on paper, I wanted to check out how it translated into real world space. Ergonomically, everything is at your disposal, when you're in the driver's seat, which is great. The piano black treatment, on the dashboard, looks great and the plastic quality is better than before. The cabin now receives a dual tone treatment, with beige and black being the choice and it makes the cabin look a bit more spacious. There's Apple CarPlay and Android Auto, automatic climate control too as also Navigation on the top VX variant. The steering wheel is a new unit, with revised audio controls and there's cruise control function on offer. The Amaze will be offered in four variants - E, S, V and VX and equipment levels will vary accordingly. The top of the line VX will feature a 7-inch touchscreen equipped infotainment system, dubbed the Digipad version 2. The system is a newer version of the Digipad seen on the WR-V, City and even the BR-V and this one is extremely intuitive and easy to operate. 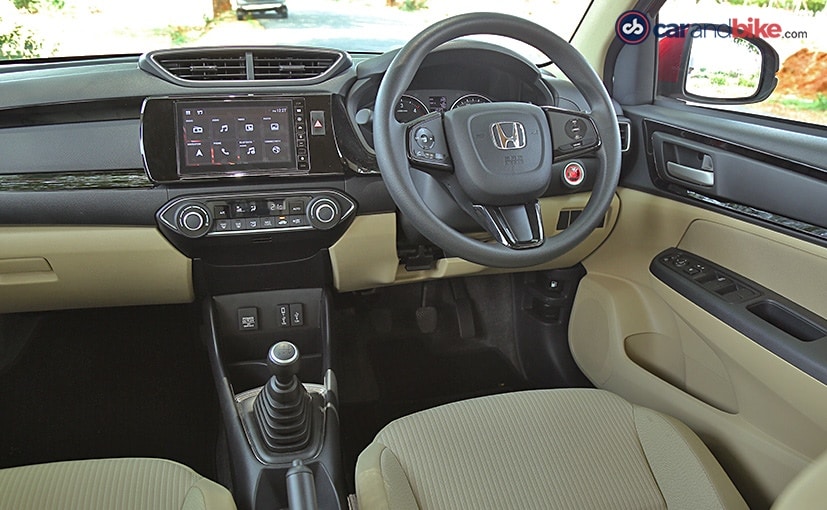 Sadly, all these features go missing in the CVT variant, that we drove, which sees a very basic music system, with white illumination and gets Radio, USB, Bluetooth and even Auxiliary Input. 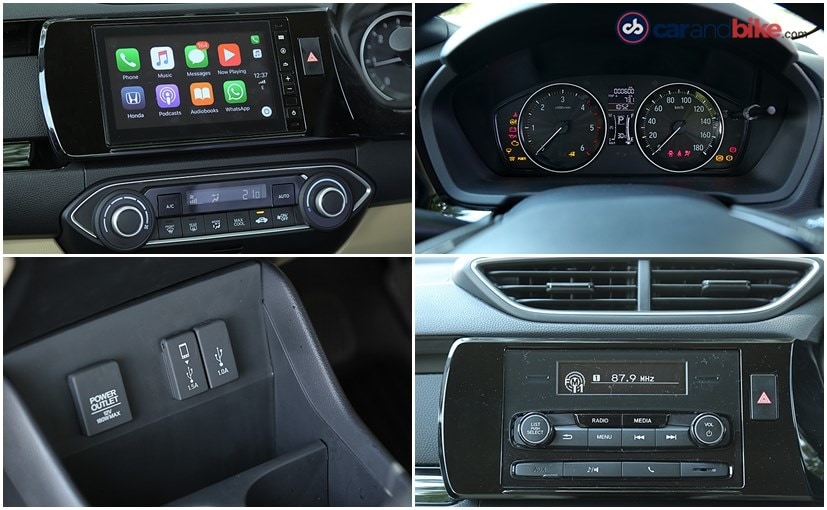 Honda has worked on improving the capacity of the air-conditioner and it has increased the volume of the compressors from 58cc to 83cc, on the petrol, and 110cc to 120cc on the diesel, to help in cooling the cabin faster, which is also the reason for not providing any AC vent, for the rear seat; which is extremely clever! 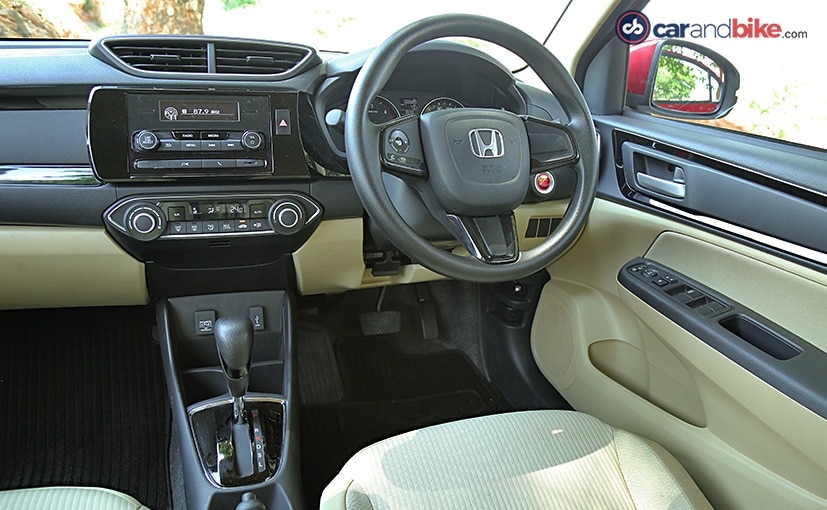 The biggest challenge for carmakers though is creating space in a small car such as this, so let's get in to see what the Amaze has to offer. As I have already told you before, the wheelbase has been increased, which is one reason why there's a good amount of space, at the rear. There's good knee room and the seats are comfortable, though a bit of thigh support would have helped. The problem however is the headroom and for a tall guy, like me, that's a bit of an issue and that's because of the sloping roof design of the car. There's a charging point that you get as well and then there's the centre armrest, which also has two cup holders. In fact, Honda has provided a whole bunch of storage spaces, at the front and the rear, where you can store 1 litre bottles and this certainly comes in handy and shows how much the company has been listening to its customers. 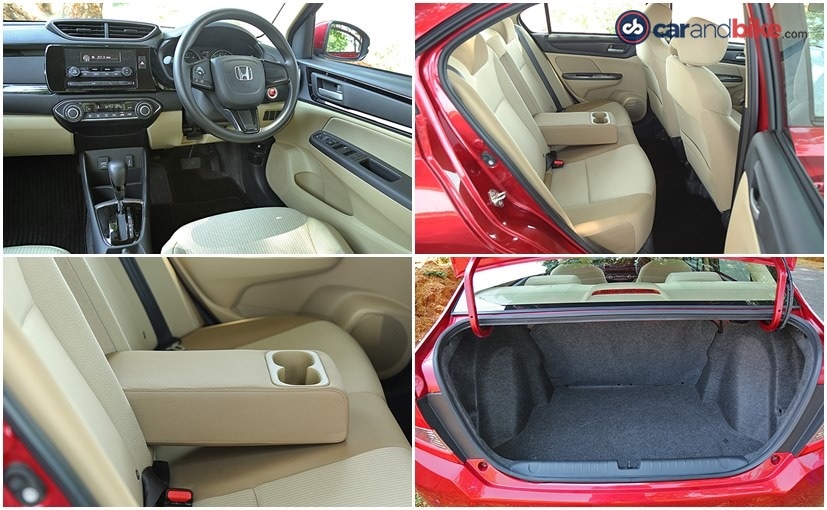 In fact, Honda has gone that extra mile to make sure the passengers are comfortable and are also spoilt for choice, which is why you get an automatic transmission, in both the petrol and the diesel variant. It's the first time that the company will be bringing a CVT, in the diesel, in India; and yes, it's a big deal, considering that the competition uses the automated manual transmission (Dzire and Tigor) or a DSG, in case of the Ameo. 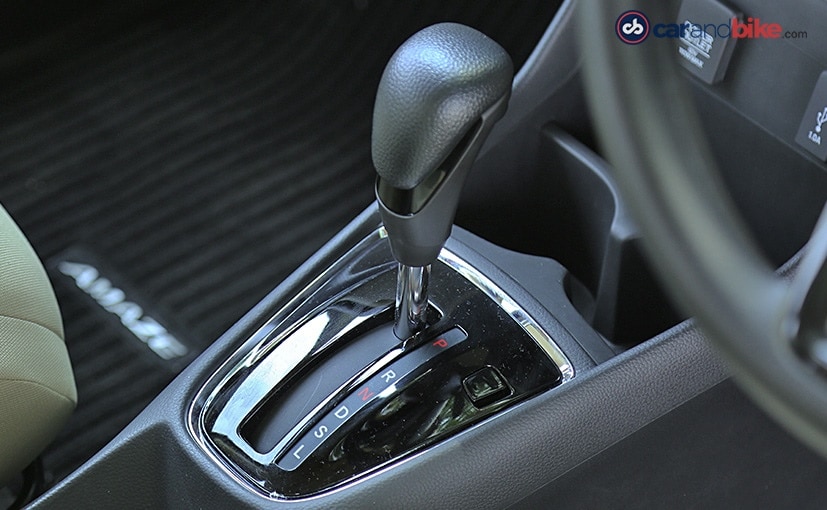 The Honda Amaze gets CVT in both petrol and diesel models

However, the Amaze diesel automatic is underpowered, when compared to the manual, though the engine is the same 1.5-litre one. It offers 79 bhp (20 bhp less) and torque figures are down to 160Nm (40 Nm less)and that's done, to help the CVT deliver power quicker, so that there's no buffer to deal with and it works well. The power kicks in, at around 1800 rpm, and the CVT keeps feeding in the power to you, which is great on the highway and even within the city. It just eases the way you drive in traffic conditions too and that's the biggest take away. There's also a 5-speed manual transmission, on offer, but the clutch is a little heavy and even the gear changes a bit sloppy. I faced problems shifting from the 2nd gear to the 3rd and the problem repeatedly occurred in that quadrant. The CVT is surely is the better option here and the fact that it returns 23.8 kmpl makes it efficient too. The manual returns 27.4 kmpl and that's just shy of the Dzire, which shows how much the folks at Honda have worked, on the engine. 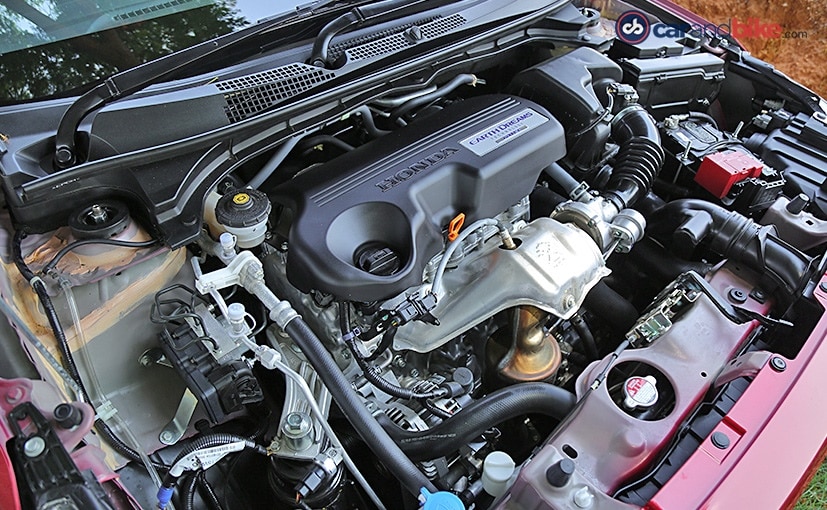 Honda has worked on the NVH levels too, on the car; but frankly, we noticed just a marginal change. The diesel still is noisy and when it goes above 3000 rpm, the noise seeps into the cabin, which really is a concern. But, things are a bit different, in the petrol variant. 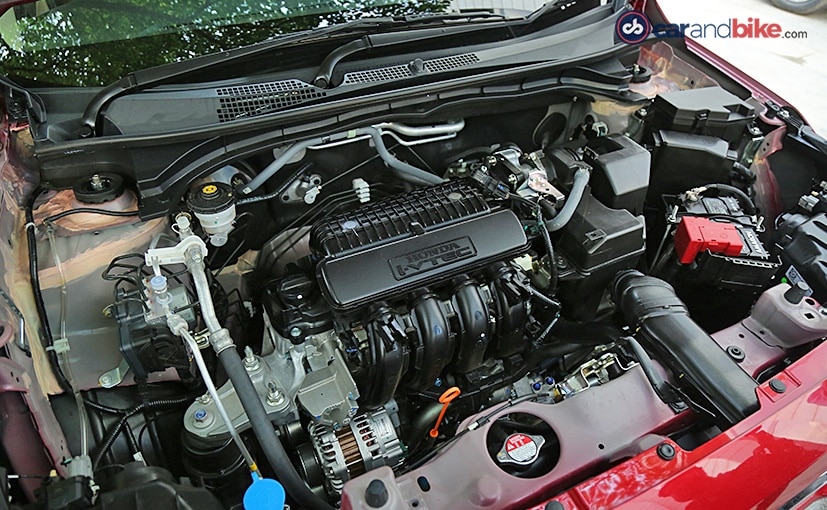 The petrol variant has the same 1.2 litre unit, which churns out 89 bhp and there's 110 Nm of torque. The clutch is light on this one and the gear changes better than the diesel version. Power delivery is smoother, with the suspension setup a little on the stiffer side. It behaves well on the road and doesn't really throw you around, in the cabin, when it hits bumps. It takes the undulations on the road in its stride and you'll be very comfortable, in the driver's seat, as also the rear. The petrol automatic, though, carries a bit of the rubber band effect and that's something of a let-down. The petrol CVT is the only one to come with paddle shifters, which have 7 steps to it, and here too there's a slight delay, in response. 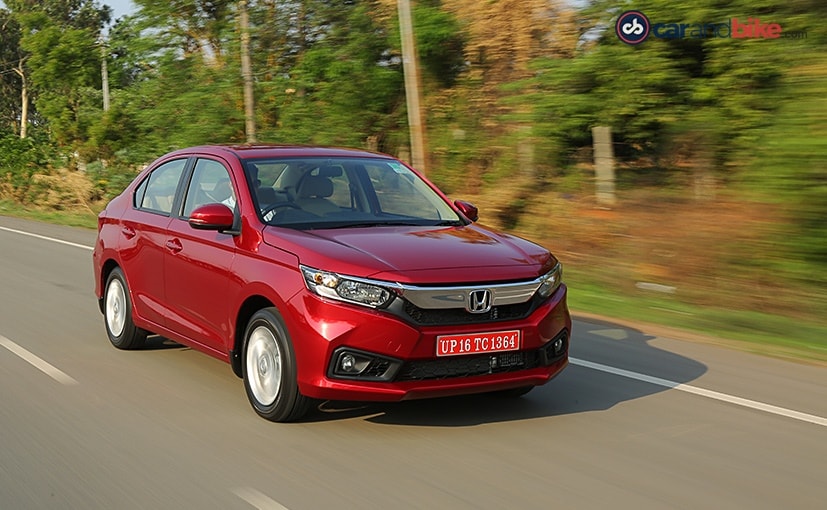 The Amaze is now offered with new 15-inch alloy wheels

As far as safety features are concerned, the Amaze comes with dual airbags and ABS, as standard. You also get features like rear parking sensors, in the lower variants, while the top end VX variant also gets a rear parking camera. But, the highlight of it all is how Honda has revised service costs, for the new Amaze. The company has said that the car will come with a 3-year, unlimited kilometres warranty, along with the option of extending it, to the fourth or fifth year of ownership, for unlimited mileage as well.

Of course, the Amaze will cost more now, considering that it's got a lot more. Prices for the petrol Amaze start at ₹ 5.59 lakh and go all the way up to ₹ 7.99 lakh while the diesel starts at ₹ 6.69 lakh and tops out at ₹ 8.99 lakh (all prices ex-showroom India). These of course are introductory prices, and with it Honda still hasn't managed to undercut its biggest rival, the Maruti Suzuki Dzire.