While we have already driven the Renault Captur diesel, we recently got a chance to get behind the wheel of the petrol version of the compact SUV, and we have some interesting things to say about it. Read on to find out more. 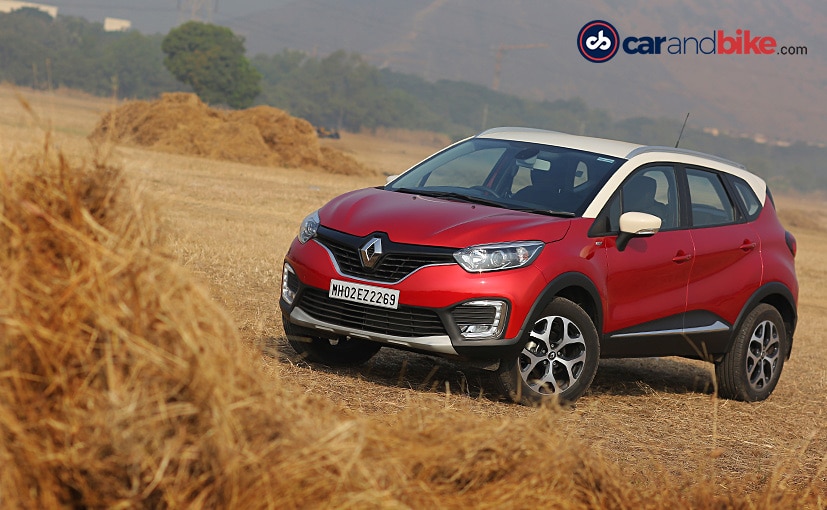 View Photos
The Renault Captur petrol is powered by the same 1.5-litre motor that powers the Duster petrol

Last year when we drove the all-new Renault Captur, we have to say, we were quite impressed. The crossover/SUV came with a purpose to create a niche for itself in the compact SUV space, and frankly, it is making a mark for itself, in a slow and gradual manner. It came with a very bold and stylish design with a bunch of segment-best features, and very capable petrol and diesel engines. While the powertrains were essentially the same as the ones that do duty on the Renault Duster, and some cars from Nissan, back then we only got the drive the diesel version of the Renault Captur. However, now we have finally managed to get our hands on the petrol version of the car, and we have a lot of things to say about it. So, let's get started. 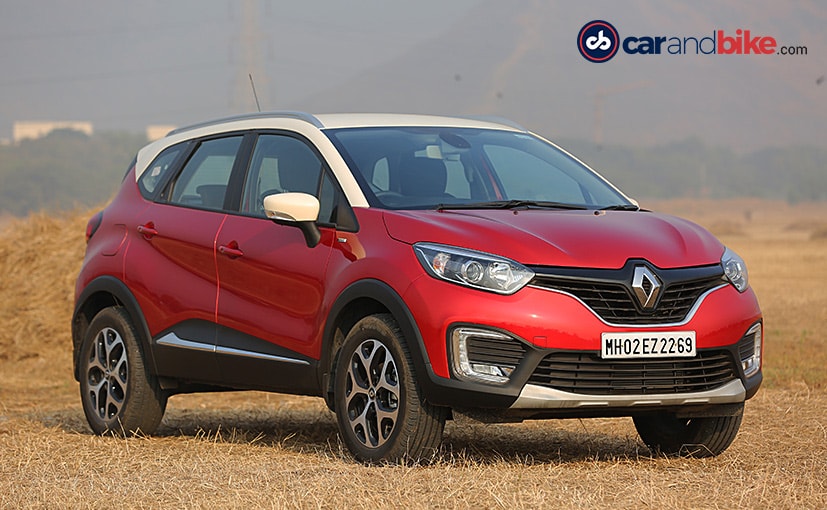 Visually, the Renault Captur petrol is identical to the diesel version of the SUV

Visually, there is no mentionable difference between the petrol and diesel version of the Renault Captur, not even an engine badging. However, we do have the variant badging just below the end of the A-pillar, and unlike the diesel-powered, top-end Platine variant of the Captur we drove in 2017, the petrol model we had with us was the dual tone RXT trim. This means, on the exterior front, this RXT trim misses out on few cosmetic bits like the chrome upper accent on the grille, cornering function for foglamps, and few other chrome details. The Captur we drove was dressed in the new, recently introduced dual tone Radiant Red Body with Marble Ivory roof, with the B- and C-pillar blacked out. 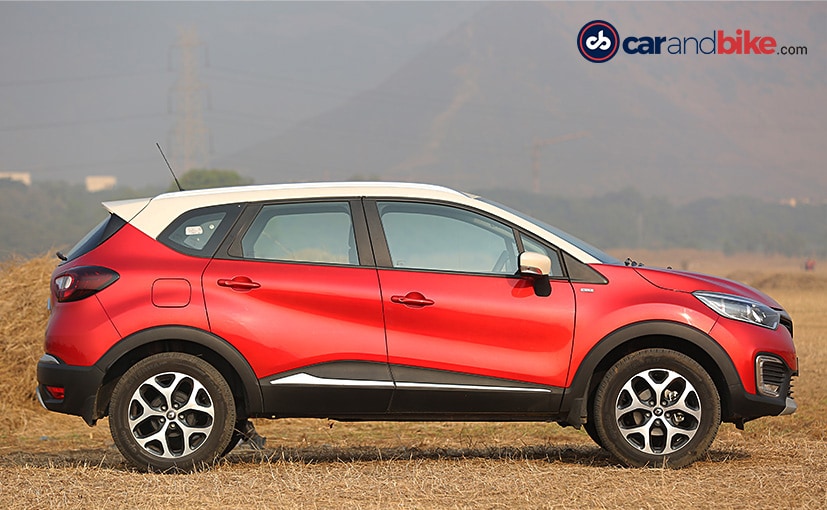 As for the features, we are already familiar with a bunch of them, like - the sweptback projector headlamps, the C-shaped LED daytime running lamps, larger grille with the Renault logo and silver skid plate, which together bring in that European flavour. However, it doesn't get the full-LED headlamps or the floating indicators that are part of the top-end Platine trim. The bits that remain unchanged include the large and stylish 17-inch twin-5-spoke alloy wheels, contrast coloured ORVMs with turn indicators, silver roof rails, and bold side-body cladding with chrome accent. As we move to the rear, we are again in familiar territory with the roof-mounted spoiler, wraparound LED tail lamps with chrome elements, the 'Captur' badging at the centre on a chrome applique, and a beefy rear bumper with more chrome elements and a faux diffuser with round chrome-tipped exhaust. 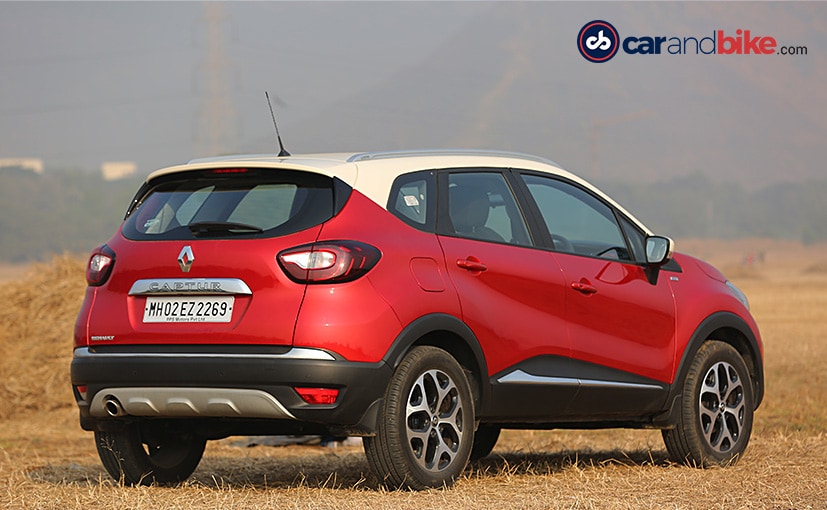 Overall, all these elements make the Captur is a very good looking car, helping it stand out in a segment that has only seen butch and boxy SUVs. In fact, in my opinion, the Captur actually brings in a bit of freshness to the segment and is better looking than the much loved Hyundai Creta too. The Captur also offers a wider colour palette with multiple dual tone options, which add to the overall styling of the car. 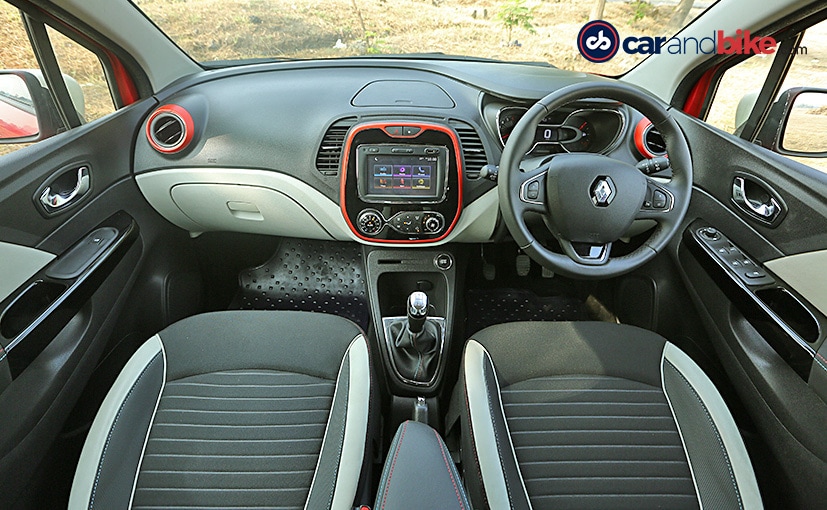 The Renault Captur's cabin too gets the dual tone, black & white treatment

We said it before and we are saying it again, the cabin of the Renault Captur is truly a nice place to be in. The fit and finish are very good and Renault has made use of some good quality plastic and other premium material. The cabin gets dual tone black and ivory treatment with body coloured bezels for the air con vents and centre console, which in this case was red. The cabin also gets matching black and ivory fabric upholstery with faux leather trims and Anodized Rouge Passion or Blue Pacifique interior deco accents. The five-seater SUV offers a good amount of space for five average-sized adults, along with creature comforts like rear AC vents, a centre armrest with cup holders, and a rear charging socket for added convenience. 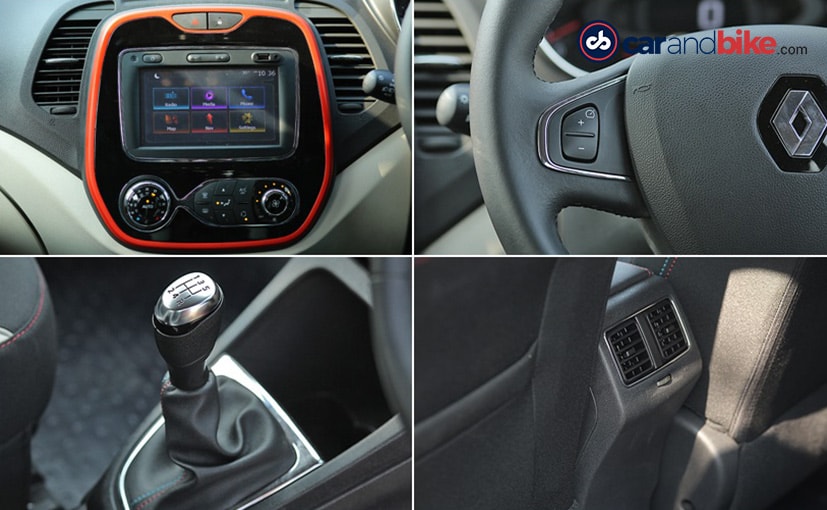 Being the RXT trim, the features list is also pretty elaborate, with offerings like a 7-inch touchscreen infotainment system, Bluetooth and AUX-IN connectivity for smartphones. Weirdly enough, I was not able to connect my phone via Bluetooth, which essentially seemed like a problem with the unit I had. The Captur petrol misses out on features like Apple Carplay and Android Auto. The Captur also offers an Arkamys-tuned sound system, automatic climate control, cooled glovebox, LED cabin lamps and more. The RXT trim also comes with electrically adjustable and foldable ORVMs, however, the latter function wasn't working on the model that we had with us. The Captur also gets height adjustable driver's seat, however, even at the lowest setting the seat is quite high and taller drivers might find it a bit uncomfortable at times, however, it's no way a deal breaker. 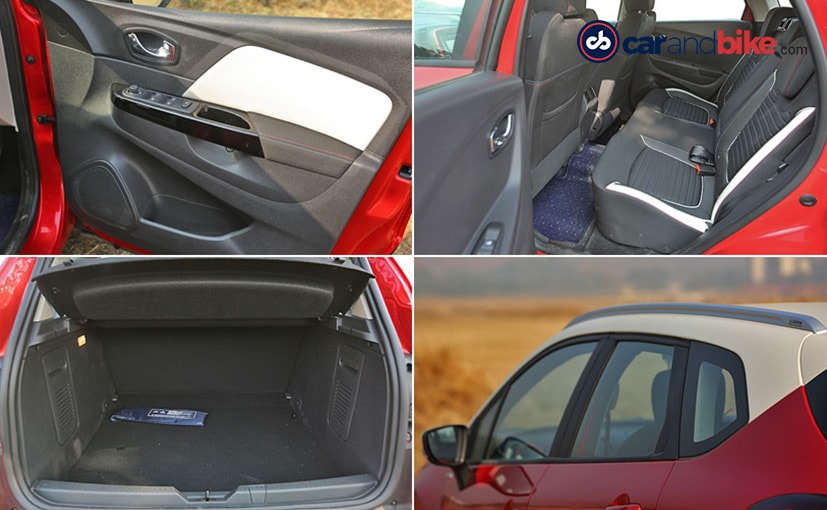 The Captur is pretty high on safety as well, as dual front airbags, ABS with EBD and Brake Assist, and driver seatbelt reminder come as standard fitment. In addition to that, the RXT trim comes with rear parking sensors, rear parking camera, keyless entry, walk away lock, rain sensing wiper, and ISOFIX child seat anchorage among others. However, the top-end Platine variant also comes with side airbags, electronic stability control, and hill start assist which go missing in this one. 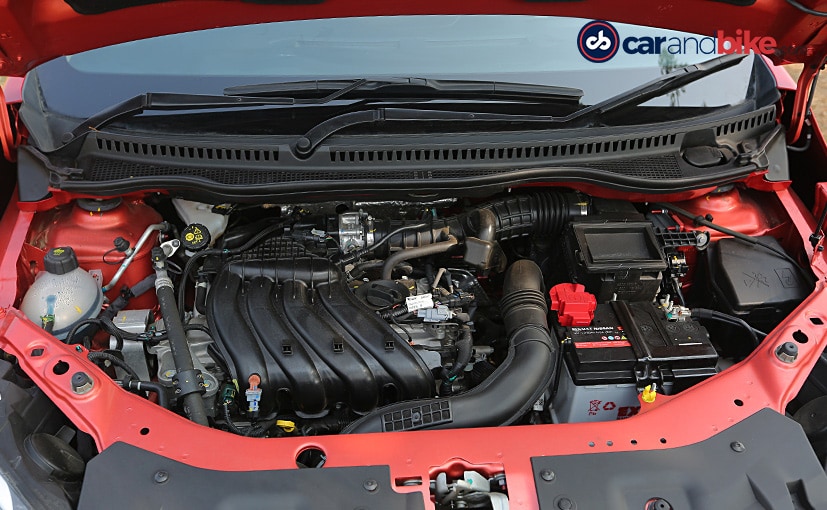 Powering the Renault Captur is the same tried and tested 1.5-litre H4K petrol engine that has been powering the Duster SUV. In fact, the 1498 cc, in-line 4-cylinder motor offers the same amount of power output - 105 bhp at 5600 rpm and develops a peak torque of 142 Nm at 4000 rpm. The engine feels quite peppy and the power delivery is smooth and linear offering a good amount of low- and mid-range performance and a decent top-end as well. The engine also offers good low-end torque, which starts to build up right from as low as 2,200 rpm. The five-speed manual gearbox comes mated to the engine is also quite a treat, the gearshifts are smooth and each one of them fell in the right slot without any fuss.

Also Read: Exclusive: Renault Captur Automatic To Be Launched In India Next Year 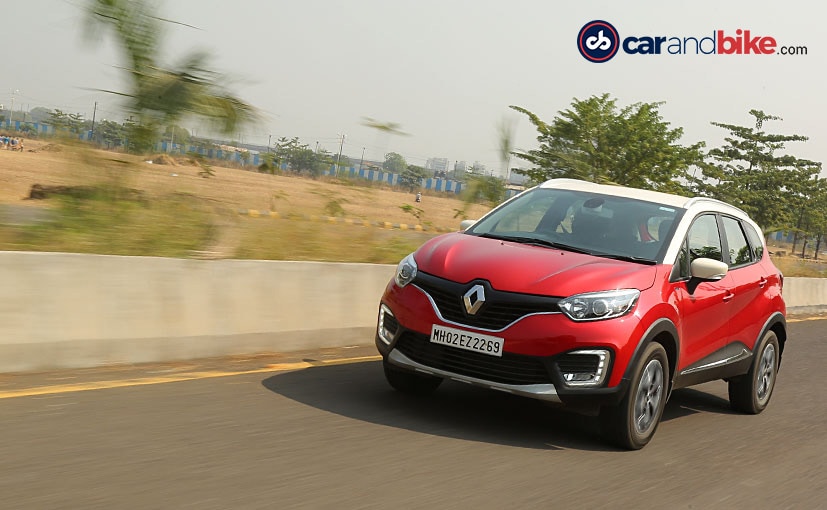 The suspension setup is pretty much similar to the setup in the Duster. However, this one is softer. So, while it allows the Captur to be a bit quick and stable both on straight line and corners, it's also good at tackling the undulations on the road. Furthermore, the NVH (Noise, Vibrations and Harshness) levels of the Captur were very much in control, and apart from the mild grunting of the engine at higher rpms and a bit of tyre noise, not much seeped into the cabin. As for braking performance, the Renault Captur comes with disc brakes up front and drum brakes at the rear, and while the brakes were quite progressive, we wished there was a little bit more bite to them. 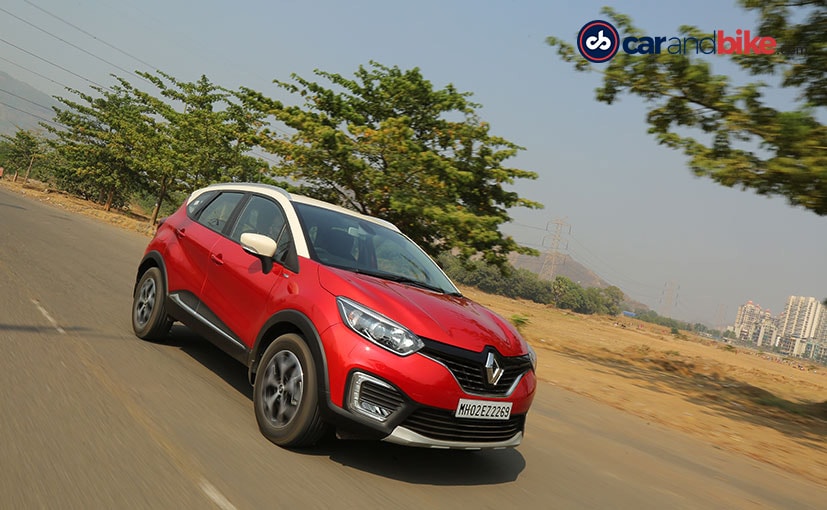 The Renault Captur petrol comes with a comes with a bunch of standard safety features, premium creature comforts, a capable petrol engine

Priced between ₹ 9.99 lakh to ₹ 11.45 lakh (ex-showroom, Delhi) the Renault Captur petrol is priced very similarly to its key rival, the Hyundai Creta. In fact, while the base model of the Captur might be marginally more expensive than the Creta's base trim, the top-end RXT variant is over ₹ 2 lakh cheaper than the top-end Creta petrol. So, is the Captur petrol really worth buying? Well, it should definitely be on your list of considerations. The car comes with a bunch of standard safety features, premium creature comforts, a capable petrol engine, and most of all it stands apart from its box-shaped rivals, with its crossover proportions and colourful palette. However, it does lose out on a few features like a sunroof, or automatic transmission. So if you out in the market to buy a petrol SUV, and do not mind going for something not too mainstream, yet capable and feature packed, the Captur is definitely worth considering.