Chinese motorcycle manufacturer CFMoto is likely working on a full-faired 250 cc motorcycle, which is likely to be launched very soon. 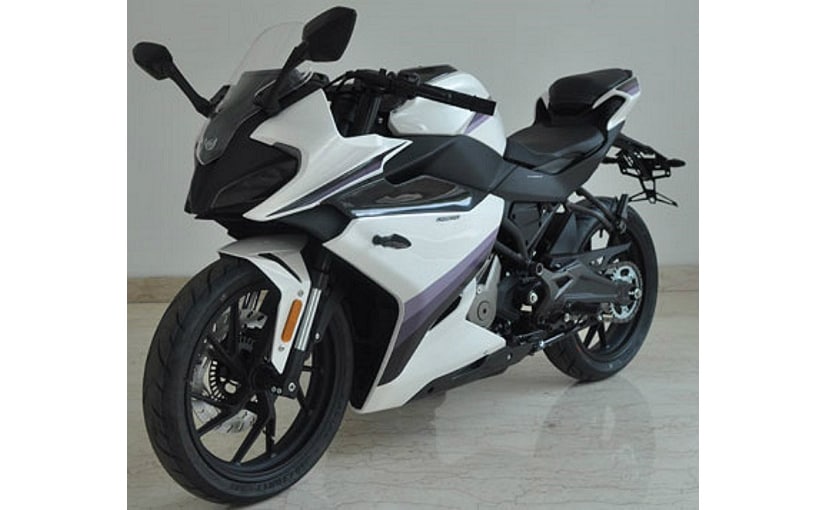 Chinese motorcycle manufacturer CFMoto will be introducing a full-faired, quarter-litre sports bike, what is to be called the CFMoto 250SR. Leaked images of an almost production-ready 250SR now reveal what the final model will look like. The CFMoto 250SR is actually based on the firm's 250 cc naked bike, the CFMoto 250NK, and will be a full-faired version of the naked roadster. The leaked image is reportedly from a Chinese patent application, and the bike looks like it's almost ready to roll off CFMoto showrooms, so a launch seems imminent.

Like the CFMoto 250NK, the 250SR will also be powered by the same 249 cc, single-cylinder, four-valve, liquid-cooled engine which puts out 26.5 bhp at 9,000 rpm and 22 Nm of peak torque at 7,500 rpm. Unlike the 151 kg kerb weight of the 250NK, the full-faired 250SR is expected to be slightly heavier, and is likely to tip the scales with around 160-165 kg. Cycle parts are expected to be upside down front forks, Brembo brake calipers, and the 250SR is also expected to come equipped with a full-colour TFT instrument panel.

The design however, is quite international, and will take on the very best Japanese and European offerings in the same segment. That is partly due to the fact, that CFMoto is associated with Kiska Design, the same design house which is responsible for many KTM motorcycles in recent years. More details will only be available once the bike is officially unveiled by the company.

Mahindra Trademarks 'The Scorpio Sting' Name; Could It Be The Next-Generation Scorpio Moniker?
47 minutes ago

2021 Honda Forza 350 Unveiled; Likely To Be Launched In India Next Year
28 minutes ago

Volkswagen Gauges Interest In Ducati Brand As A Prelude To Potential Sale: Report
3 hours ago

Mahindra Trademarks 'The Scorpio Sting' Name; Could It Be The Next-Generation Scorpio Moniker?
5 hours ago