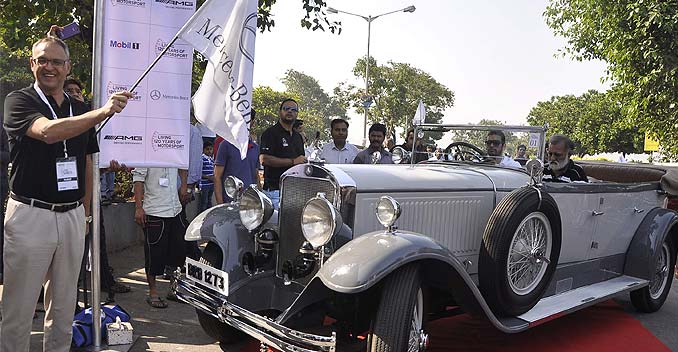 A Sunday morning is essentially very lazy; it's that day of the week, when lying in bed for as long as you wish does not beget the ire of family members. However, when you get up early on this sacred day, you are witness to suspicious looks followed by a small whisper of doubt.

This Sunday brought out exactly all those emotions, but I was up and about early to witness the classic car rally organised by Mercedes-Benz. The invite said that 50 cars would participate in the rally, however, 70 turned up and it was a spectacle that Mumbai won't forget.

The rally marked the celebration of 120 years of Mercedes-Benz's rich motorsport heritage. It also celebrated Mercedes-Benz's first ever FIA F1 'World Constructor's Championship' victory, not to forget that the Driver's Championship too lies in their hands, though it remains to be seen who will bring in the other trophy - Nico Rosberg or Lewis Hamilton.

Eberhard Kern, Managing Director and CEO, Mercedes-Benz India said, "Mercedes-Benz made history by participating in the world's first automobile competition in 1894. Having won its first Grand Prix in 1908 and many more accolades it is remarkable to see it do so well in its first outing at the F1 after the major change in rules."

It is not often that you see these cars come out in the open because of their sheer delicate nature, and the sweltering heat did not dim the hopes of the owners of these classic cars, who were seen driving around town with the top down.

Classics including Pontons such as the W120s, Fintails such as the W110 and the W111, and recent classics like the W124 and the W108 grabbed the attention of bystanders. Then there was also the 190 SL and a couple of them from the current breed of cars like the SLS AMG, CLA AMG, GL AMG and the GLA AMG.

The bee-line of cars takes you back in time; transporting you to an era which probably one could only imagine. These beauties graced the roads like they always have, and all we could do was stand and stare.